This week, the Tech.eu research team tracked more than 120 tech funding deals worth over €5.4 billion, and over 35 exits, M&A transactions, and rumours, and related news stories across Europe, including Russia and Turkey.

As a bit of a bonus, we've recently listed the top 20 financing deals for European tech companies in 2021, rounded up the most important news stories of the past year, reviewed the past year in terms of European tech IPOs, SPACs and direct listings, and took even deeper dives to list the biggest fintech, healthtech and deeptech funding rounds in Europe in 2021.

We've also published our latest podcast - have a listen!

Below, please find an overview of the biggest European tech news items for the past couple of days (subscribe to our free newsletter to get this round-up in your inbox every Monday morning). We're changing the format to make our curated roundup even more digestible and useful, feedback always welcome!

Tallinn-based Bolt has raised €628 million in a Series F funding round. The company which started out life as a ride-hailing app (Taxify) has been rolling out a bevy of services including car-sharing and micro-mobility options, as well as food delivery services.

Paris-based Qonto has raised €486 million in a Series D funding round, now providing the company with a €4.4 billion valuation, a new record in the French scale-up space. Qonto is an all-in-one finance solution for SMEs and freelancers, handling everything from everyday banking and financing to bookkeeping and spend management.

Parisian refurbished electronics marketplace Back Market has raised €450 million in a Series E round. The fresh influx of fundings will be used to further the company’s growth plans, specifically in the US market.

One-to-one video-based online tutoring platform GoStudent has raised €300 million in a Series D funding round. In yet another strong show of support, this round arrives just seven months post GoStudent becoming Europe’s first EdTech unicorn, and the new funding will be used to support global expansion efforts, strategic M&A activity, and improving the company’s market share in existing geographies.

HeimKapital, a German startup that provides a platform to facilitate the trade of partial interests in real-estate properties, has secured €300 million in debt funding from Munich-based investment firm Yabeo and others.

Connecting neighborhood retailers with independent shop owners and specialist brands, Paris-based Ankorstore has raised €250 million in a Series C round, now making the company France’s second unicorn of 2022 with a valuation of €1.75 billion.

Not satisfied with a paltry $160 million Series D round, Barcelona-based TravelPerk has announced an addition of $115 million to the round, and in doing so signs the dotted line on the unicorn club application with a valuation of $1.3 billion.

SEBA Bank, a Swiss digital assets banking platform, announced that it has secured a Series C funding round to the tune of CHF 110 million (roughly €105 million).

Dublin’s Flipdish has raised $100 million in a Series C round, and in doing so becomes a card-carrying member of the unicorn club, with a valuation placed at $1.25 billion.

London-based Global Processing Services has announced an additional $100 million raise, adding on to an already impressive $300 million round.

SoSafe, a Cologne-based startup that provides a cybersecurity training platform to corporate clients, has raised $73 million in a Series B round in order to accelerate international growth.

Finland’s Yahaha Studios has raised $50 million in a new funding round. The platform provides both developers and players the ability to build, publish, host, and operate 3D interactive multiplayer games.

In an ongoing series of its global footprint readjustment, local delivery platform Delivery Hero has sold off another $150 million worth of its stake in Latin America-based Rappi.

London’s Mayfair Equity Partners has acquired a 60% majority stake in LoopMe for $120 million in a deal that provides the adtech with a $200 million valuation.

Parisian collaborative learning platform 360Learning has acquired Looop for $20 million in a mix of cash and shares.

Eurazeo, the €27 billion Paris-based private equity firm, has acquired an 80% equity stake in the Belgian solar energy firm Ikaros Solar with a commitment to invest up to €45 million.

European specialist growth equity investor Verdane has held a €300 million final close of an impact-focused fund investing in technology-enabled businesses based out of Europe.

Berlin-based PropTech1 Ventures has announced the final closing of its oversubscribed first fund at €50 million. As the name implies, PropTech1 Ventures is focused on investing in the European property and construction-focused startups that are working in the digitalisation, method modernisation, and sustainability/ESG sectors within the real estate industry.

Pear has landed in the European startup ecosystem. Leading the way is Pepe Agell, the VC firm's newest partner and the former co-founder and CEO of Chartboost, backed by Sequoia, which he successfully sold to Zynga after leading the team for ten years.

Turkish grocery delivery app Getir is looking to raise capital at a valuation of $12 billion in a funding round started by its existing investors, a person with knowledge of the matter told Bloomberg. Getir, valued at $7.7 billion last year, is aiming to raise over $1 billion to finance expansion overseas.

UK financial regulators are preparing to step up their scrutiny of cloud computing providers amid growing fears that an outage or hack of their services could severely disrupt a banking system increasingly reliant on them.

Facebook faces a $3.2 billion+ class action in Britain over allegations it abused its market dominance by exploiting the personal data of 44 million users.

The owner of WeTransfer, which offers file sharing and collaboration tools said on Wednesday the company will seek an initial public offering of shares and listing on Amsterdam's Euronext stock exchange.

Google has spent $1 billion to buy a central London building where it is currently a tenant, showing its confidence in the future of the office as a place to work, the company said on Friday.

EU lawmakers held their first political discussion on the proposed Digital Markets Act, a key piece of the EU’s digital legislation, this week, with a view to reaching an agreement by the end of March.

The UK's parliament has launched a cross-party group of MPs and Lords to cover the crypto and digital assets sector.

Following the first call for proposals under the EU’s new R&I programme, Horizon Europe, €619 million will be invested in projects dreamed up by scientists and scholars.

The UK’s data watchdog is seeking clarification from Mark Zuckerberg’s Meta about parental controls on its popular virtual reality headset, as campaigners warned that it could breach an online children’s safety code.

WTF: Startups and SMEs promised equity funding by the European Innovation Council (EIC) will have to wait “a number of months into 2022” for the financing, as the European Commission struggles with setting up the fund under Horizon Europe.

Law enforcement and privacy make terrible bedfellows, Europe is learning. After an EU watchdog ordered the bloc’s intelligence agency to delete troves of data, Europol has fired back, arguing that the order — made in the name of privacy rights — will harm investigations.

A decision by Austria’s data protection watchdog upholding a complaint against a website related to its use of Google Analytics does not bode well for use of US cloud services in Europe.

How the EU space programme could deliver bigger economic impact.

Lithuania's showdown with China over Taiwan is poised to deliver an unexpected windfall to the small Baltic nation that France and Germany could only dream of: investment in microchip manufacturing. Meanwhile, the Romanian government has opened the applications for the National Recovery and Resilience Program (NRRP)’s €500 million fund for the microelectronic vertical.

Andres Sutt, the Minister of Entrepreneurship and Information Technology of Estonia, is gunning for 25 Estonian unicorns by 2025.

Can the European tech ecosystem withstand the inevitable downturn?

French President Emmanuel Macron says online platforms and foreign "propaganda" media are the main drivers behind the spread of disinformation in the country — and he wants to rein them in.

What the Great Resignation means for UK tech jobs in 2022 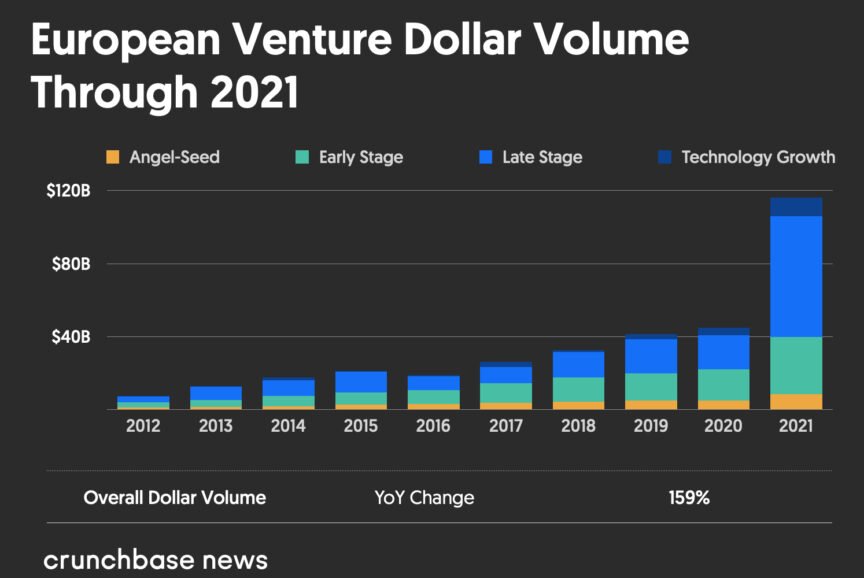 This Week in European Tech: Checkout raises $1 billion, Bolt bags €628 million, Delivery Hero sells off Rappi stake, and more
Comments
Follow the developments in the technology world. What would you like us to deliver to you?
All