With so much on the line, global businesses and brands are returning to the time-tested method of expressing appreciation and gratitude.
Dan Taylor 22 June 2022
Share
Facebook Twitter Linkedin

Dublin-based &Open has raised $26 million in a Series A funding round led by London's Molten Ventures. The company specialises in, and is presumably doing its very best to bring back, the timeless art of companies sending out gifts to express their thanks and gratitude to customers, employees, prospects, and the like. The new capital is slated to be used to continue the company’s expansion plans, including the imminent launch of &Open On-Demand, a platform designed to make better gifting more accessible.  Prior to the completion of this round, &Open had raised $7.2 million since 2017, thus bringing its total to $33.2 million.

There’s nothing that solidifies that the war for talent is real, consumers are as fickle as ever, and business partners are no more loyal than rain on your wedding day than the return of the corporate gifting programme.

As a true testament to its value, I am the custodian of the watch that my grandfather was presented upon his retirement some 50+ years ago. And yes, it still works, and no, I’m not going to tell you who the maker of this timepiece is, but it is Swiss, and it is one of my most treasured possessions.

As the aforementioned factors combine with rising costs of, well, everything, in order to keep employees, customers, and businesses on board, I for one, welcome this return to removing the faceless mask of the corporation and returning it, if only at a glance, to its origins of a co-operation. A co-operation between management and labour, both respecting and appreciating the others’ efforts.

It would appear that I’m not alone in these thoughts as &Open has grown by leaps and bounds over the past few years, posting ARR numbers that have surged by over 376%, and onboarded 270% more clients year-over-year. And these are no brands to sneeze at as &Open counts Airbnb, Peloton, Spotify, Hopin, Intercom, Wayflyer, and Better-Up amongst this impressive client base.

Sidebar: Is it just me, or are there some remarkable similarities between retro service providers &Open and Papier’s web presence? Probably just a coincidence. 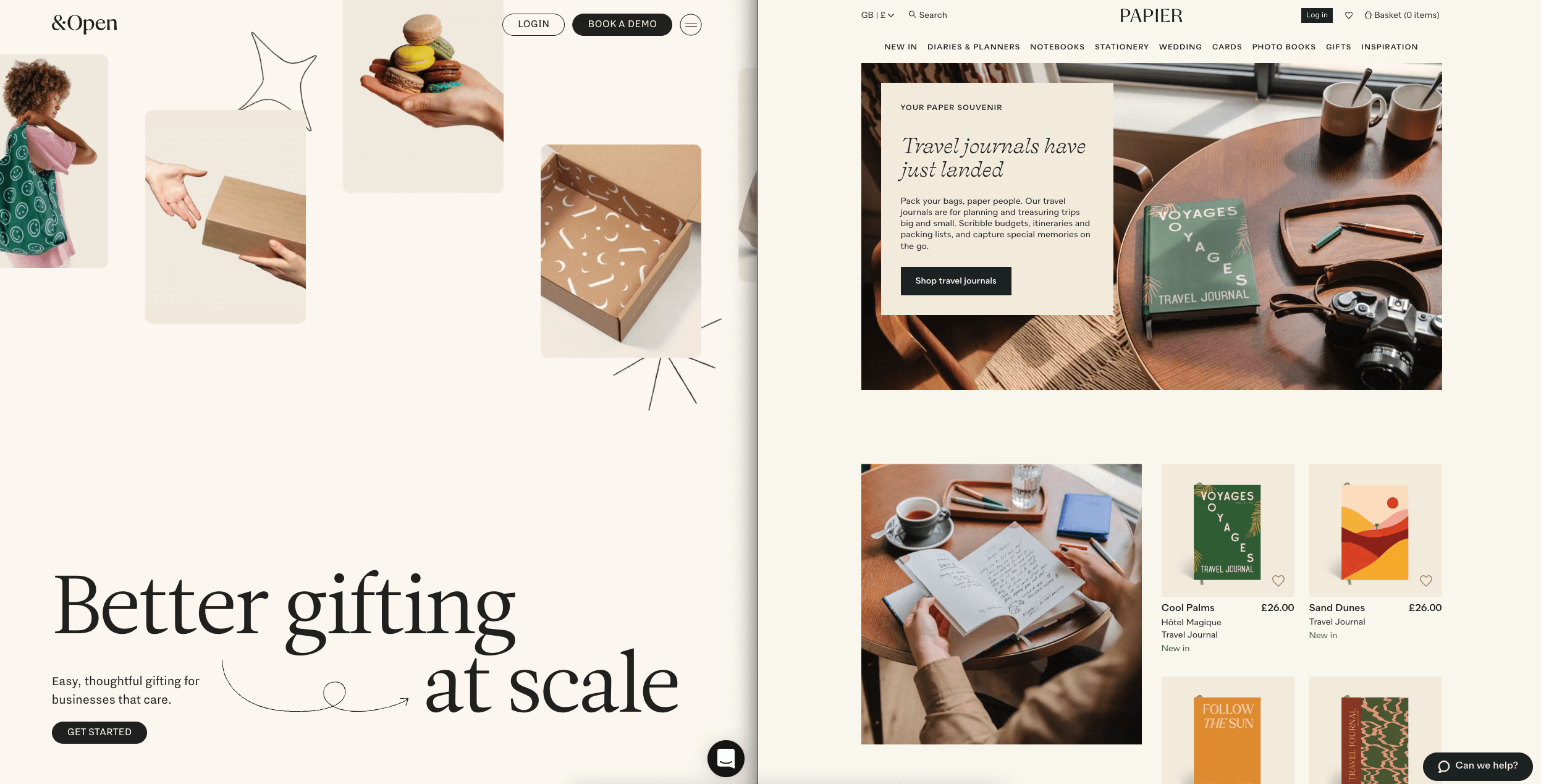 Employing a staff of approximately 90 individuals across the Emerald Isle, a portion of the $26 million is earmarked for a New York office opening, where &Open intends to remind the North American market just how far a small token of appreciation can go.

“All companies gift—be it their employees, customers, prospects, or partners. Companies gift because people power businesses and those relationships need to be nurtured. Today, more than ever, loyalty matters,” explained &Open co-founder and CEO Jonathan Legge. “&Open is where some of the world’s best brands come to build loyalty.”

&Open’s $26 million Series A round was led by the ubiquitous  Molten Ventures, with existing investors First Round Capital, LocalGlobe a.n.k.a. a member of the Phoenix Court Group, Tribal VC, and new investor Middlegame Ventures participating. According to a statement issued by the company, an additional cadre of undisclosed new and existing investors also contributed to the round.

“Working with some of the largest global businesses and brands, &Open has proven that gifting, when done right, is an incredibly powerful tool to increase brand loyalty and build advocacy,” commented Molten’s Nicola McClafferty. “We’ve been highly impressed with how the team has built out a global platform that makes carefully crafted, sustainably sourced, and beautiful gifts more accessible to people and companies across the globe.”

Ireland’s &Open unboxes $26 million as corporate gifting makes a triumphant return
Comments
Follow the developments in the technology world. What would you like us to deliver to you?
All

NEXT
CloudNC raises $45 million, welcomes Autodesk and Lockheed Martin to the table
London-based CloudNC has raised $45 million in a Series B funding round. The software maker…
Dan Taylor