Accel intends to SLAY it, leads €2.5 million pre-seed round

Aiming to combat the online negativity pool that social media can be, Berlin-based SLAY is taking a different approach, and helping teens get back what Likes have lost
Dan Taylor 19 January 2023
Share
Facebook Twitter Linkedin

The Berlin-based social network aimed at promoting positive interactions for teens online through playful, social gaming experiences SLAY has raised €2.5 million in a pre-seed funding round. According to the fledgling company, the capital will be used to officially launch the app publicly,  further develop the platform and launch in additional markets, all the while supporting an ongoing recruitment drive.

Ok, before we even get into what SLAY is and does, there are two giant elephants in the room here: 1. Launching a social network in this day and age? Mmm okay. 2. I profess in no way or means to be a marketing wizard, but I am a fan and user of the English language and the phrases SLAY and “promoting positive interactions” aren’t exactly synonymous. And yes, I too have referred to Geddy Lee often slaying a bass line, but context people, context.

Clearly Accel, Harry, Ikka, et. all are seeing something beyond just the name and the timing. Let’s have a look.

And by look, let’s not even bother, as we all know, most probably first hand that social media can oft be a breeding ground for negativity, hostility, and quite frankly, just downright dickish behaviour.

“Since it’s a relatively new technology, there’s little research to establish the long-term consequences, good or bad, of social media use. However, multiple studies have found a strong link between heavy social media and an increased risk for depression, anxiety, loneliness, self-harm, and even suicidal thoughts.” - HelpGuide.org

And this statement covers a wide swath. Now narrow this activity down to impressionable teenagers flooded with chemicals and it doesn’t take a rocket scientist to figure out where this is headed. Whichever side of the aisle you sit on the online safety bill, I’m fairly certain both camps can agree that there’s a problem here that’s been brewing for well over a decade.

Where SLAY seeks to make a difference in its platform which has been built from the ground up aiming to promote better mental wellbeing among teenagers through normalising and reinforcing positive social media interactions. 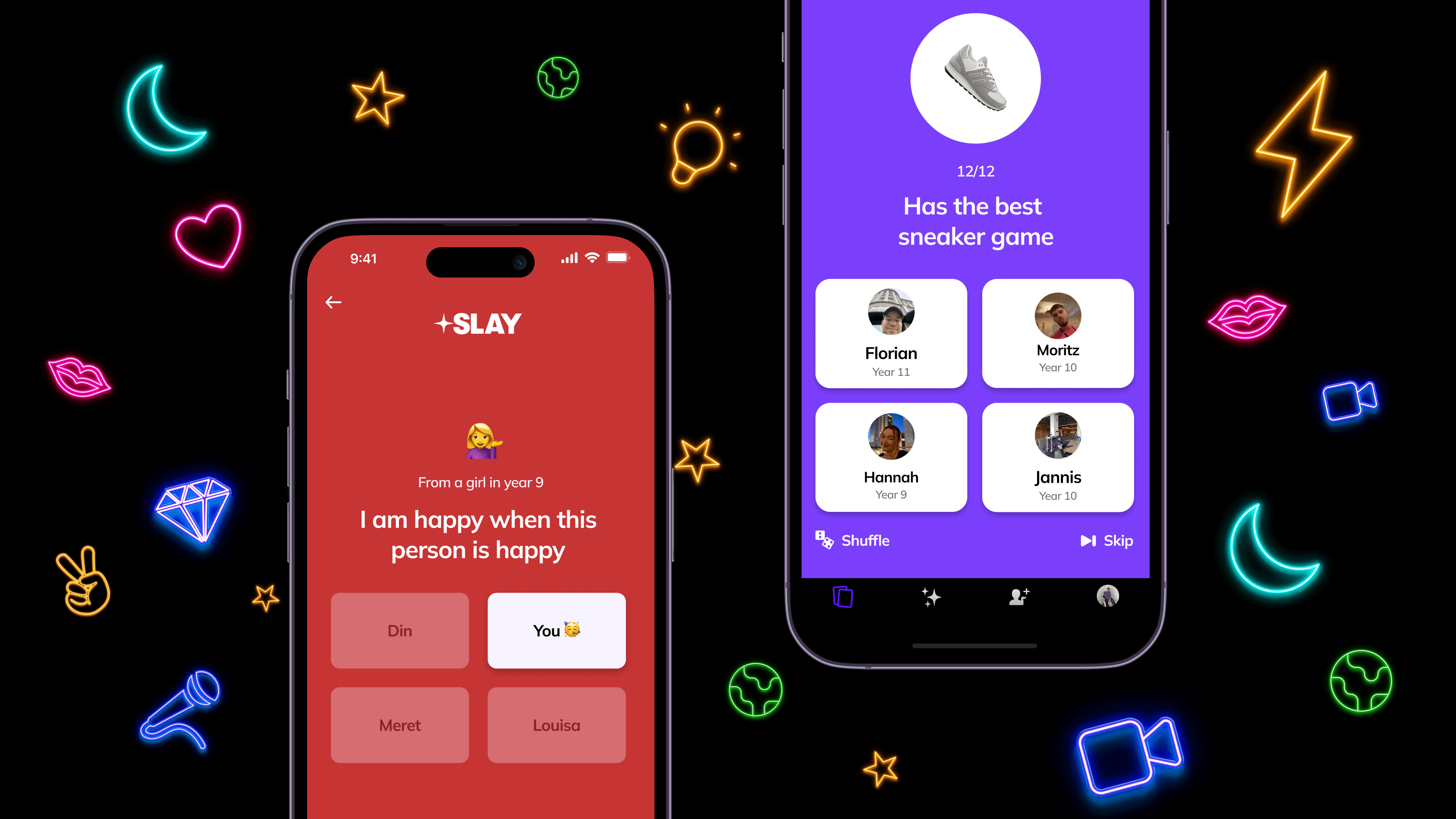 Upon opening the app, SLAY challenges the user with 12 questions when they open the app which they must answer by choosing another user (from their school, class, or peer group) to pay an anonymous compliment (or “slay”) to. Ok, taking to more in the direction of “slayed it, nice one, good job”.

Once completed, all users can view compliments they have received provided they answer the 12 questions when logging on, while the identity of those who sent the compliment remains anonymous.

Founded in 2022 by a trio of 23-year old, Fabian Kamberi, Jannis Ringwald, and Stefan Quernhorst, Kamberi was inspired to develop SLAY after hearing about the experiences of his siblings struggling with their mental health and their online footprints amid the COVID-19 pandemic. In just four days since launching on the German iOS App Store, the creation took the number 1 slot, and according to the startup they’ve already amassed come 250,000+ users.

“Fabian is one of the most exceptional and ambitious founders in Europe. The traction he has seen since launching with over 1 million compliments being sent and topping German and Austrian App Stores is a super clear indication of hitting a core consumer want and behavior,” commented round participant Harry Stebbings.

Accel intends to SLAY it, leads €2.5 million pre-seed round
Comments
Follow the developments in the technology world. What would you like us to deliver to you?
All