The Spanish VC industry has one big problem: it doesn't exist

Spain is home to a number of VC firms, of all shapes and sizes. The only problem is, they don't seem to do a lot of deals, and the rounds are typically small. On a positive note: change is underway.
Alex Barrera 05 December 2013
Share
Facebook Twitter Linkedin

Entrepreneurship has become more trendy in Spain - that's a fact.

A fresh law meant to attract entrepreneurs, a local Dragon's Den, a TV program showcasing new startups, another highlighting individual entrepreneurs, or inventions made in Spain, and a new one about to go live ... you can almost feel the perception of about small businesses and their founders changing throughout the country.

The question beckons, though: is Spain riding the entrepreneurship bubble as hard as it did the real estate one?

A look at the numbers

According to a recent report by Telefonica on the Accelerator and Incubator's ecosystem,  Spain has had a massive influx of new startup programs in the past few years.

To be precise, Spain has 38 programs (versus Germany's 31 or France's 35). Such a scale isn't supported by the country's GDP, pointing out a more-than-probable bubble. 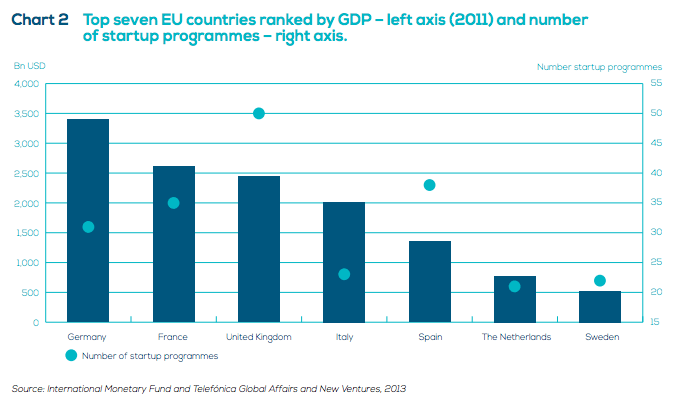 Despite all the excitement and growth, one has to wonder whether the venture capital firms in Spain are up to the task, or lagging behind. I get asked this question quite often, and people get surprised when I tell them that there isn't really a VC industry in Spain.

Yes, maybe I'm being too extreme, but it's hard to argue with cold, hard data. The truth is, a quick glance at the 2012 numbers paints a pretty clear picture.

Spain saw 348 VC operations accounting for 158.8 million euros in 2012. Yeah, you read that right - that means an average operation of around 456,000 euros. Per deal. And that's counting all industries, including foreign investments.

If we just stick to startups and exclude big deals in biotech, nanotech, etc. we're talking about a mere 69.8 million euros. If we look at the deals tracked by Loogic, we get a similar number of 52 million euros in 2012.

If we compare the total volume achieved in 2012 with the ones reported in Q3 of 2013 across all European regions, the difference is astounding. The Nordic region moved the same amount of money in one quarter than was invested in Spain in all of 2012.

As you see, that hardly qualifies as an industry - it's really more like a club of VCs.

Interestingly, Madrid accounted for 60 operations, compared to 114 in Barcelona. We should note that the average financing round in Barcelona is half the size of your typical round in Madrid, which is partly explained by the fact that Barcelona tends to have much younger startups, while Madrid probably attracts larger series B rounds for more mature companies.

We dug a little deeper and checked the current status of the top VC funds in Spain.

Granted, most of those deals were co-investments, and they move in the seed round space with sizes ranging from 200,000 to 1 million euros. Very rarely do you see funds in Spain investing on their own, and the ones that have done it, haven't fared too well so far.

A close runner-up this year is Active Venture Partners, which has done an outstanding job in the past few years and tends to do bigger rounds (1 million euros or more) than most Spanish VCs.

They also just had a new exit with Golden Gecko (bought by DMI) and saw a couple more last year (one of them was BuyVIP). We're keeping a close eye on Chris and his team because they will likely be a major player in 2014.

Another interesting new player with deep pockets is Seaya Ventures, which came onto the radar this year and has already done four deals, totalling 20 million euros in investments already.

On a second plane you can find Faraday Venture Partners, Bonsai Venture Capital, Vitamina K Venture Capital, Nauta Capital, Fundación José Manuel Entrecanales and Inveready Technology Investment Group, all with two to three deals this year. It's interesting to note that the Fundación José Manuel Entrecanales is increasingly getting in on general startups and not just cleantech companies like they did in the past, which is great for the ecosystem.

On a third plane, you can find the likes of Adara Ventures and Highgrowth, which are barely doing new deals. Most of their activity is doing follow-on rounds for existing portfolio companies at this point.

Finally, there are a bunch of other VCs that appear to be in limbo - Axon Partners Group decided to invest in India while hiding their deadpooled companies (at least three that I could find) in Spain, so go figure.

Bullnet Gestión has no more funds after depleting their two funds, Bullnet Capital I and II, and it's trying to get some exits going. Mobius Corporate Venture Capital, meanwhile, doesn't have a functional website anymore, while Inicap went under.

There are a bunch of other players making small investments, ranging from business angel networks to small funds like Big Sur Ventures, Sidkap, Digital Assets Deployment (DAD), VentureCap SCR, etc. but I wanted to focus on the biggest and most active, which as you can see, are few and far between.

There are some interesting trends at play that are worth talking about.

The first one is that more and more European funds are looking for promising startups in Spain, while most Spanish VCs are focusing locally. A mix of regulatory issues and tax exemptions forces them to invest a certain percentage of their funds in Spanish companies.

"There are very few funds that have a defined and tested strategy for internationalization and follow-up of their portfolio companies across different geographies. We're trying to replicate what Israel has done wonderfully for years, where companies have automatic access to leading markets (US) from the very beginning."

Meanwhile, non-Spanish investment firms are increasingly looking to get in on the action: Sunstone Capital recently invested in Tyba, Point Nine Capital in Typeform, Intel Capital in Indisys, GGV Capital in AlienVault, and so on. Some of them are even adding Spaniard to their ranks, like the recent addition of Marc Ingla to Mangrove Capital Partners, where he will focus on opportunities in emerging in areas such as gaming, e-commerce, financial services, media content and messaging with a bias towards Latin countries.

This indicates that, slowly but surely, things are starting to happen in Spain. There are some local buy-outs worth mentioning as well: Offerum, the deal clone (and third player apart from Groupalia and Groupon Spain) recently acquired both Planeo and Destiny, which means they're aggregating verticals as part of its expansion (or survival?) strategy.

On round sizes and internationalization

The rounds we're seeing are still quite small. Seed rounds range from 100,000 to 200,000 euros, while series A rounds are between 500,000 - 1 million euros. Spain needs more risk-taking and bigger seed, Series A and B rounds before we can really speak of a serious VC industry in Spain.

Small rounds take too much time from the startups and they barely allow them to compete in larger markets like the US or Europe at large. If we want bigger wins, we're gonna need bigger bets.

Another, perhaps non-surprising trend is the fact that most of the new rounds being raised in 2012 and 2013 are being used to expand the businesses elsewhere.

I've been a big believer that Spain never had a big enough tech market to start with, but the economic crisis has made my point for me, and it's forcing almost everyone to look for business abroad. The interesting thing is that, while some years ago, the expansion was LatAm, there seems to be an increasing number of Spanish startups focusing on UK, Germany and France.

Coincidentally, I think LatAm was always a harder region for even Spanish-speaking entrepreneurs to conquer than key European markets.

"We should make our startups global as soon as possible. We need to add first-rate international members to the team from day one, have a much better international look and feel, combine local operations with global ones from the inception, and to make the companies seem global in each of the countries they operate in. The success of our international Spanish ventures have a very positive impact for the next round of startups."

Finally, a new mega fund from ICO is probably going to change the landscape. The Spanish government is finalizing the red tape before launchg a 1.2 billion-euro fund that should have a massive impact on several of the Spanish top VC funds.

The new super fund is probably a response to all the criticism about Spain not supporting startups. In true Spanish fashion, they're cloning, or at least trying to, the Israeli VC strategy from several decades ago by creating a mega-fund to invest in smaller funds.

"Only a portion of that fund will will be attributed to VCs. If well-disciplined investment fund managers with relevant experience with technology startups are selected, then this will definitely give a good boost to the Spanish tech scene. In any case and generally speaking, promoting entrepreneurship and injecting capital to get the wheel turn faster is very positive news for the evolution of the Spanish ecosystem as a whole."

Meanwhile, the corporates haven't been sitting idle and have been pushing large funds that have ended up in many of the current active Spanish VCs. Kutlu (Kibo Ventures) comments:

"It's interesting to see Spain being part of the recent growth in Corporate VC with initiatives such as Amerigo (strategic investments in selected funds) and Wayra (14 accelerators worldwide with already close to 300 investments in seed-stage startups) by Telefonica, BBVA ventures (100 million dollars fund for financial technology startups), Innovation foundation of Bankinter with its seed capital program, and Fitalent (5 million euros fund) by Everis.

I wouldn't be surprised if we see more of these being developed by the large and leading corporations of Spain."

All in all, the Spanish VC industry is tiny, but at least new tastes are being developed. More and more companies are thinking global, forcing local VCs to shift their strategy.

"Spain still has a very recent and short VC track record if you compare it with other geographies like UK or US. The industry, which started pretty much centered around small seed funds, has seen a major change since the 90s.

Some funds have grown in total size and venture rounds as well as in number of investment stages they operate at, something that's very important for follow-up rounds of growth companies. At the same time, top international investors are pouring money on Spanish startups, which is crucial. All in all, we're seeing exciting developments, although slower than it should be.

We need to promote big and relevant exits in critical sectors so that everyone is more conscious; entrepreneurs, investors and strategic acquirers. I'm sure that we'll see important advances on this during the next 2 to 3 years."

True enough - we're moving towards a more mature VC landscape in Spain, but I also share his frustration on the speed of that change.

The Spanish VC industry has one big problem: it doesn't exist
Comments 20
Follow the developments in the technology world. What would you like us to deliver to you?
All

NEXT
Regulatory rubble: the confusing (and harmful) message Europe is sending its entrepreneurs
It was only a few years ago, in 2010, when San…
Roxanne Varza