FullContact needed help with its mission of trying to build a seamless cross-platform contact management solution, and to that end acquired Latvia-based Cobook, which had the same vision.
Robin Wauters 15 January 2014
Share
Facebook Twitter Linkedin

Denver, Colorado-based FullContact aims to solve a gigantic (and growing) problem - properly managing contacts across different platforms and devices - and it needs kick-ass tech and people for that.

To that end, the U.S. company is today announcing its acquisition of a small Latvian software company called Cobook, which had been piecing together a solid solution for the same problem.

Financial terms of the transaction, which closed a few weeks ago, are not being disclosed, but it concerns a part cash, part stock deal. All six full-time Cobook team members will move out to Denver to help morph the two solutions into one in the next few months.

I spoke to Cobook founder Kaspars Dancis yesterday, and he explained to me that most companies in the contact management app space know each other and talk all the time, but that it became quickly apparent that FullContact were complimentary in more ways than one after they started up conversations about a year ago.

Before closing before the end of last year, the deal had been some three months in the making.

FullContact has raised just south of $9 million in funding to date, from investors like Foundry Group (Brad Feld), 500 Startups and Zelkova Ventures. That means FullContact had the resources to fully take over Riga, Latvia-based Cobook, which had started up only a few years ago and raised only approximately $500,000 in funding (from HackFwd) to date. 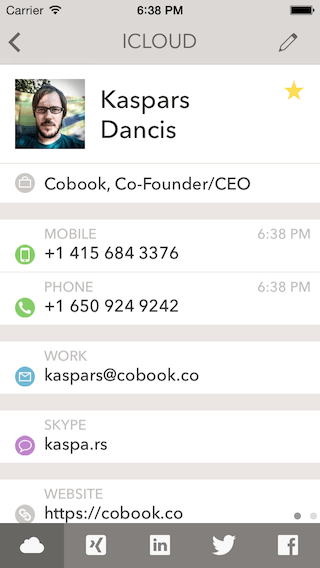 Product-wise, the combination of both businesses makes a ton of sense, Dancis argues.

FullContact co-founder and CEO Bart Lorang concurs with the sentiment: "You can't get any more 'peanut butter and jelly' than our two companies," he told me in a phone conversation yesterday.

Dancis says Cobook had the opportunity to grow a viable business on its own, but in the end, he and his fellow Cobookers figured FullContact had complimentary ingredients and together they could come up with a more awesome recipe, so to speak.

"The end vision for our products was the same," Dancis said, "and we would end up competing with each other sooner rather than later anyway."

"Cobook was initially focused on consumers, while FullContact was more B2B-oriented, but eventually there would be more overlap between the two strategies as the companies grew", Dancis added.

Going forward, Cobook as a product will remain unchanged, at least for the time being.

FullContact says it is working on software that integrate Cobook's technology and solutions with its own products, which will be deployed in the coming months.

In a FAQ, the acquiring company says "there will always be a version of FullContact that is completely free". And yes, support for Android seems to be on the way, too.

The Cobook team will still maintain and support their own products during the transition. Cobook's apps won't suddenly vanish; rather, they will be renamed FullContact for iOS and Mac and live on.

When we founded Cobook almost three years ago, we had one mission - Make contact management actually enjoyable. We think we’ve done a pretty good job of that, and the millions of you who have downloaded and used our apps have made it possible. As we’ve grown, we’ve wanted to take on bigger challenges, and today we’re proud to announce that Cobook is joining the FullContact team in order to expand the platform and solve even bigger problems.

What does it mean for you? In the immediate future, you won’t notice any changes. The Cobook applications will remain the same as we work on integrating with FullContact’s wealth of features. We love our customers, and we are always looking for the ways that we can improve your experience.

Sometimes in business, like in life, things just make sense. The values of both of our companies align, and joining them together helps us to expand Cobook to users outside of Apple.

We will be able to bring you even more features, and your contacts will have more information than they ever had before.

From bootstrapping to seed funding to traction to exit 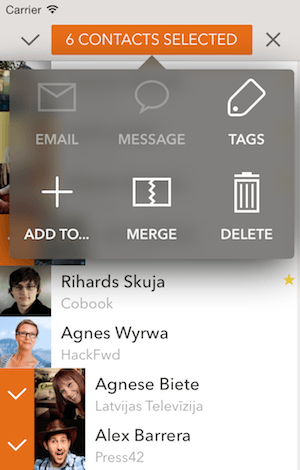 Dancis bootstrapped Cobook for a year before closing its first and only funding round.

Overall, Cobook managed to get 1 million users using its solution, across all platforms (the company builds desktop and mobile apps, for Mac, iPhone and iPad).

As mentioned above, the company was part of the family of the now-defunct seed fund / accelerator HackFwd, started and recently winded down by serial entrepreneur Lars Hinrish (of Xing fame).

In an email conversation, Hinrichs declined to disclose the size of the deal, but said it was "a good price and outcome for the company and team".

"FullContact has high ambitions and we are making a couple of times return and equity in the new company", Hinrichs added, also pointing out that this is HackFwd's first exit.

FullContact acquires rival contact management app maker Cobook (Latvia) in cash-stock deal
Comments 1
Follow the developments in the technology world. What would you like us to deliver to you?
All