Inside Zalando: the little online fashion retail engine that could

If you live in Europe, there's a decent chance you've seen its mildly amusing ads, either online or on TV. If you read the Wall Street Journal, you might have caught its name among the top five in the member list of the funky 'billion-dollar startup club' published late last week.

And yet, fashion e-commerce powerhouse Zalando manages to remain somewhat shrouded in mystery, not in the least because it decidedly opted for that, particularly in its younger years.

In an effort to learn more about one of Europe's biggest - and fastest - breakout stories in the making, I paid a visit to the company's tech headquarters during a recent visit to Berlin. But first, some background.

Rocket growth from day one

Zalando was founded as a Zappos-like online shoe retailer in October 2008 by David Schneider and Robert Gentz, initially under the name Ifansho GmbH, and booked net sales of 6 million euros in 2009.

Five years later, the company sells home accessories, sports gear, shoes and fashion for men, women and kids from over 1,500 international brands, ranging rom popular high-street brands to designer labels and even a collection of its own. The company also runs a flash sales site for designer clothing dubbed Zalando Lounge, and is slated to experiment with other service offerings in the near future.

Today, Zalando employs roughly 4,000 people, three quarters of which are taking care of the logistics of its retail operations. Out of the 1,000 people it employs full-time, approximately half are considered part of the 'tech team' - more on that later - and the average age is 29.

Last year, Zalando started two separate online shops called Kiomi and Ezema, in something of a mysterious move, but apparently decided to soon shut both down to focus on growing Zalando's brand and marketplace. From an observer's point of view, that seems like a good idea. 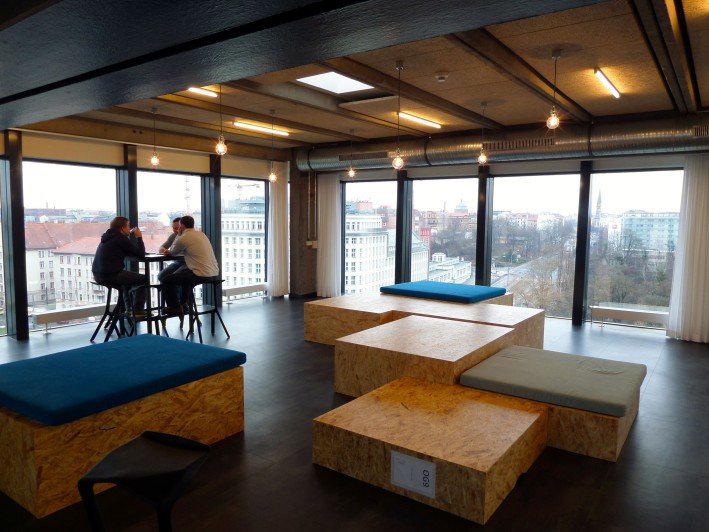 The net sales figures - the company does not share its profit numbers - for 2013 will be released in two weeks, but to set some expectations: Zalando increased its net sales to 809 million euros in the first half alone, with turnover forecasts for the entire year ranging from 1.7 billion to 1.9 billion euros.

Stopping short of acknowledging whether or not it's profitable, Zalando says it reached break-even (before interest and taxes) in the central DACH - Germany, Austria and Switzerland - region in 2012.

Is Zalando a shoe in for an IPO?

While Zalando is viewed by many as a prime candidate for a stock market flotation, the company has repeatedly said an IPO is only one option of many and not an immediate opportunity.

Whether or not Zalando pursues a flotation in 2014 or not remains to be seen, but it filed for the change of its legal form from a German limited liability company to a private stock corporation (AG) in December 2013, which many regard as a clear sign that Zalando considers itself ready for an IPO.

The company's main rival is British rival ASOS, which is listed on the London Stock Exchange.

Zalando didn't exactly bootstrap its way to its current status. 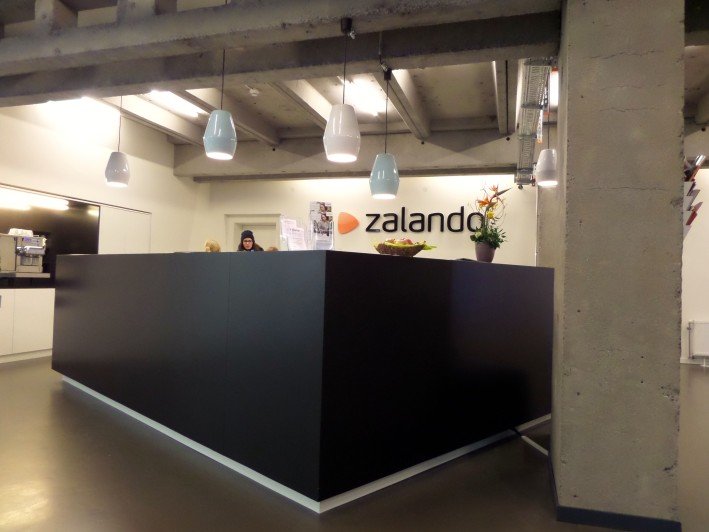 An early shareholder was Rocket Internet, the infamous company incubator started by the Samwer brothers in the year before Zalando's inception. Today, Rocket Internet is only a minor shareholder with less than 1 percent of the company (contrary to reports of the incubator exiting all of its shares), although the Samwers' European Founders Fund continues to hold a 17 percent stake.

The biggest Zalando backer by far is nearly 80-year old Swedish investment firm Kinnevik, with a 36 percent stake. Coincidentally, the Financial Times last week reported that Cristina Stenbeck, Kinnevik's chairwoman, is poised to take over as chairwoman of Zalando.

Other major Zalando investors include Danish billionaire businessman Anders Holch Povlsen (10%) and investment firms DST Global (8%), Holtzbrinck Ventures (8%) and Tengelmann Ventures (6%). Another 15 percent of the company is owned by 'other', unnamed shareholders, but these are likely to include J.P. Morgan and Quadrant Capital, who invested in the company in August 2012, alongside the Ontario Teachers’ Pension Plan fund and Putnam.

Fun fact: the third-biggest shareholder of Zalando, fashion executive and Bestseller owner Anders Holch Povlsen, is also a big backer of ASOS, the former's chief rival in the UK.

The biggest question mark is how much funding Zalando has raised to date. It is not something the company is keen to share publicly (yet), so the best anyone can do at this point is to make estimates based on incomplete data.

For what it's worth, Zalando says the Wall Street Journal's estimate ($49 million) is laughably far off the mark, and that the data provided by CrunchBase paints an incomplete picture.

We're going to refrain from guesstimating, but Zalando has likely raised way more capital than the WSJ suggests, by orders of magnitude. 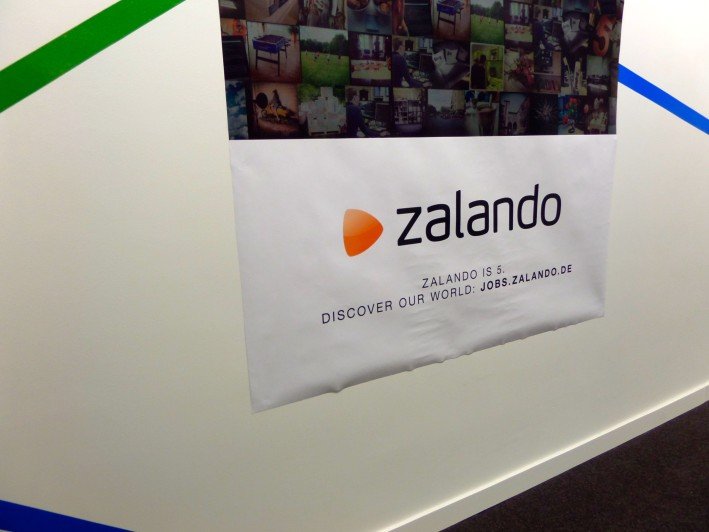 Tech is at the heart of Zalando

What many people don't realize about Zalando is just how little of it actually evolves around the 'fashion' part of the equation; the company is in fact extremely tech-heavy. 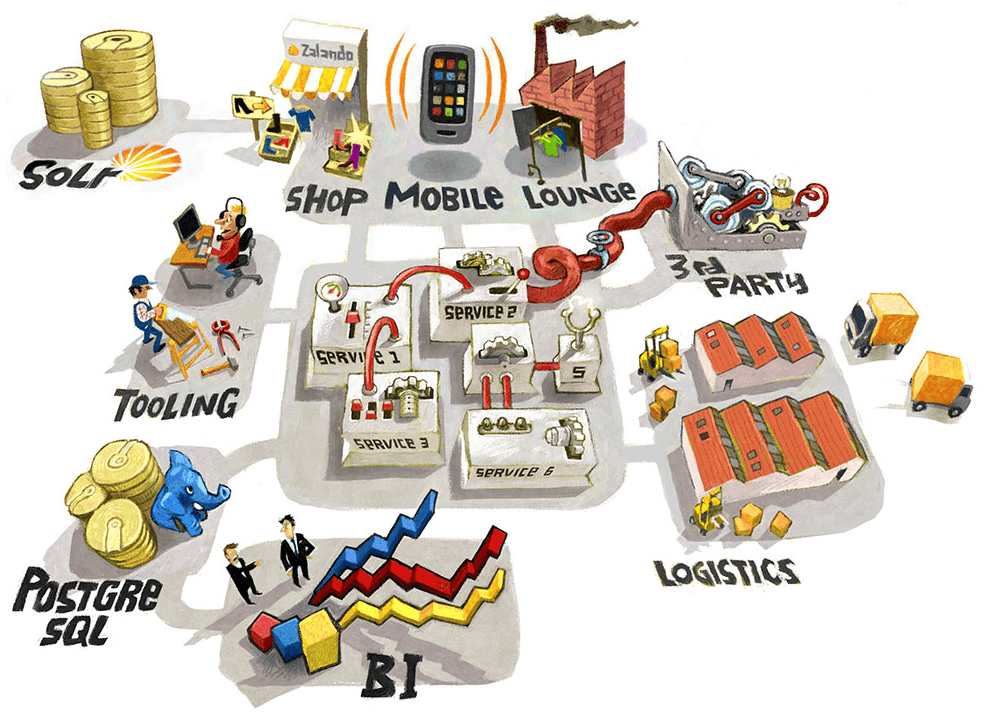 Occupying a big building on the busy Mollstraße in Berlin-Mitte, the 'Zalando Tech' team builds and maintains almost all of the technology they use in-house; including, crucially, the bespoke software for its warehousing and distribution systems. It would perhaps be more accurate, however, to say that Zalando deploys third-party software right until the point that their needs outgrow the technology.

Either way, there's a lot of proprietary software running the majority of its operations.

Pictured below are Christoph Lange, Zalando's Chief Product Officer (right), and the company's CIO Philipp Erler (left), who are in charge of managing and streamlining the technological processes. 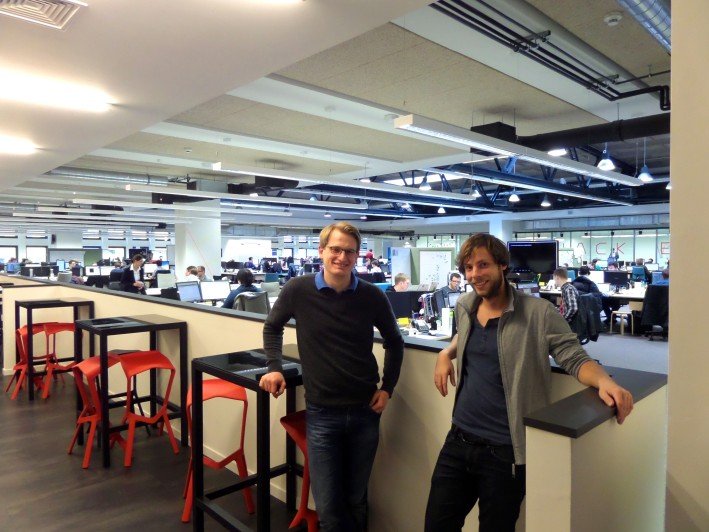 The pair oversees a team of almost 500 people, ranging from engineers to product managers, business intelligence analysts and quality assurance managers, and Zalando is looking to increase that number to almost double that by the end of 2014.

Needless to say, the company has long given up trying to recruit only in Berlin or even Germany, and has many nationalities working out of the freshly occupied building. Much like other Berlin tech companies, including Wooga, Zalando has staff that tries to make sure new hires are 'eased into' moving to and living in Germany and the red tape that comes with it. 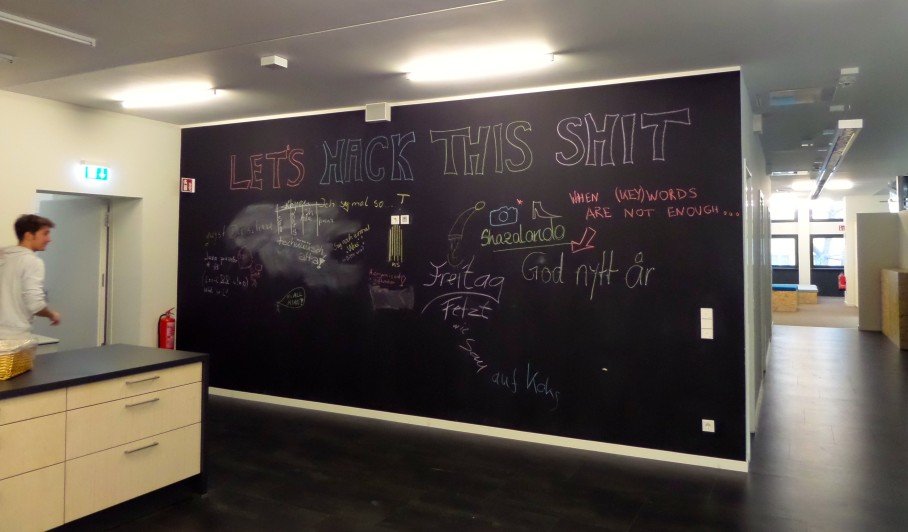 Smooth distribution as the killer feature

Logistics, another core strength of Zalando, is something the company likes to talk about, at least when it comes to certain aspects of it. If the fledgling Zalando was inspired by Zappos, it's not much of a stretch to state that current-day Zalando is modelled more after Amazon (which, of course, now owns and operates Zappos).

Zalando’s headquarters are based in Berlin, but it has three other facilities spread across Germany to distribute orders to the European markets it serves, in partnership with DHL. 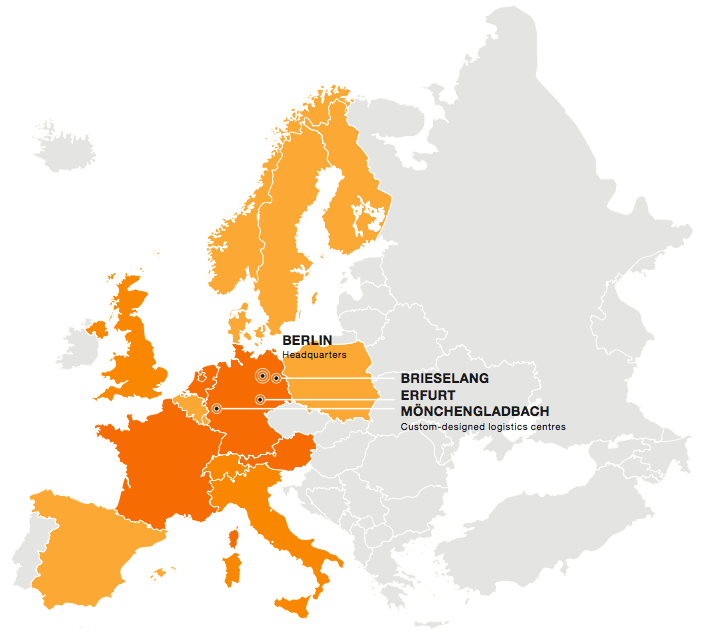 At the end of December 2012, Zalando opened its first, custom-designed logistics centre in Erfurt, which it likes to refer to as "Europe's largest wardrobe" because of its sheer size (120,000 square metres). The company also boasts a fulfilment centre in Mönchengladbach, which will soon surpass the Erfurt one in size at an estimated 130,000 square metres.

A third logistics centre is located in Brieselang, with a total area of 25,000 square metres. 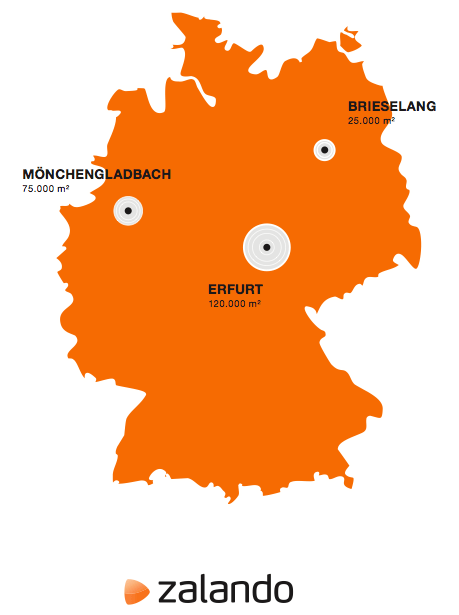 Zalando Logistics, the e-commerce company's subsidiary, says it is constantly optimizing the processes to ensure that packages are dispatched quickly and reliably. Because the locations of its highly-automated fulfilment facilities are so centrally located in Europe, customers benefit from fast delivery times and free - and thus, costly for the company - shipping and returns of goods.

Opinions on the quality of Zalando's fulfilment centres may differ, though.

A glimpse at the offline part of online retailing

In July 2012, German TV channel ZDF broadcasted a jarring report featuring a packing and distribution centre operated for Zalando in Großbeeren, resulting in observers calling the company out for 'modern slavery' and employing people under 'nightmarish' working conditions.

After the report was broadcast, former employees came out of the woodworks to confirm the harsh working conditions - particularly for temp workers - in the Großbeeren centre, operated by a publicly-listed Dutch company called DocData.

Although none of the workers in the centre were employed directly by Zalando, the company couldn't sit out the shit storm that ensued, and posted an official response to its blog (though only in German).

Zalando largely took the blame and said it was aware of its responsibilities, and that it would pay more attention to the working conditions at the warehouses operated by its partners, to make sure they comply with the company's overarching standards. 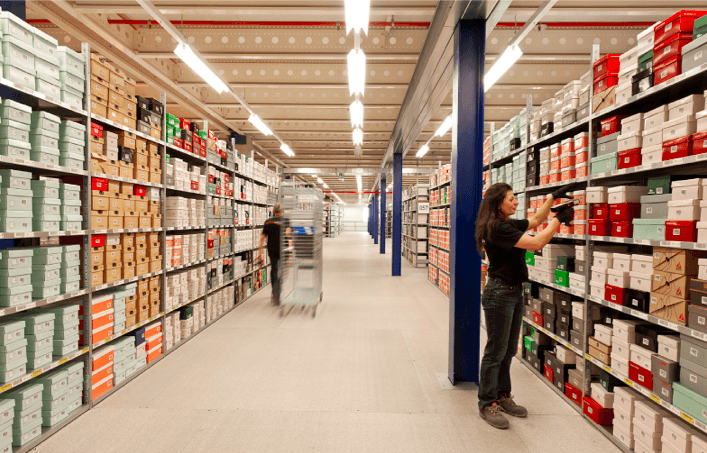 Speaking to tech.eu, Zalando explained that they worked with DocData like almost all Berlin-based e-commerce startups did, and that local authorities later found that "nothing illegal or un-human was happening in Großbeeren".

The company also said that the debate sparked by the ZDF report centered around a broader discussion about the working conditions in the overall logistics market in Germany rather than Zalando only. In this context, it's worth noting that Amazon also frequently has run-ins with warehouse worker unions in Germany.

Zalando confirmed that it still works with DocData today, and that its relationship with the company "remains good". The company did, however, point out that it is now in charge of more than 80 percent of its fulfilment as from the second half of 2013. 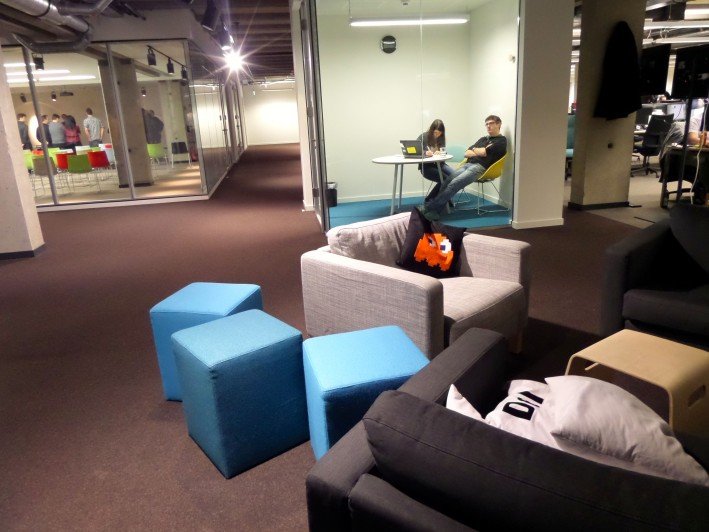 In related news, Zalando is poised to open up a second retail outlet store in Frankfurt, the company has confirmed, after setting up shop in Berlin.

A Zalando spokesperson said that its retail stores are part of a strategy to re-distribute clothing that wasn't sold through its website or mobile apps, but that it intends to remain a 'pure-play' online retailer.

Considering how far it's come so far, that doesn't sound like such a bad idea. 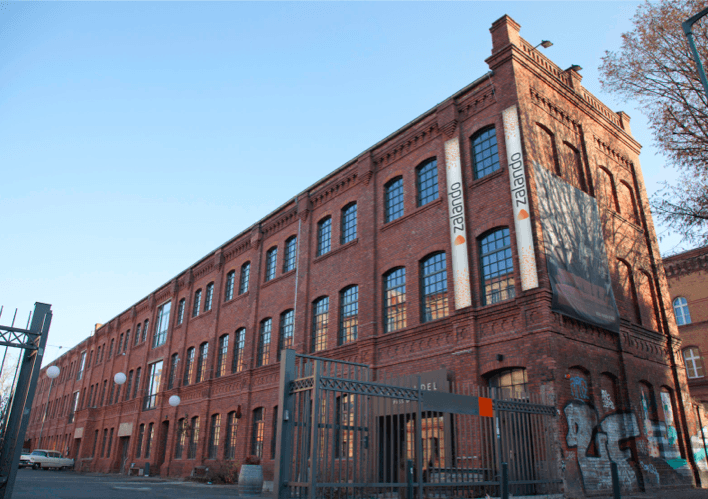 Inside Zalando: the little online fashion retail engine that could
Comments 7
Follow the developments in the technology world. What would you like us to deliver to you?
All