We took a look at Facebook's Q4 earnings released yesterday, to see how the company's doing in Europe. Not bad, it turns out, with 282 million active users and a record $727 million in revenue.
Robin Wauters 30 January 2014
Share
Facebook Twitter Linkedin

Facebook yesterday released solid earnings for the fourth quarter of 2013, reporting Q4 revenue of $2.59 billion and $780 million in profit on earnings of 31 cents per share.

You can read more about their overall numbers and growth here, but we took a close look at the earnings slides this morning to see how Facebook is performing in Europe specifically.

We particularly wanted to zoom in on the number of active users and revenue for the geography, and how they have evolved compared to the final quarters of 2011 and 2012 in particular.

Facebook has managed to consistently grow its number of users in Europe, but it's clear that people in other parts of the world have joined the social network in greater numbers over time.

To wit, the numbers of daily active users in Asia and the 'rest of the world' have pretty much doubled during the same period. 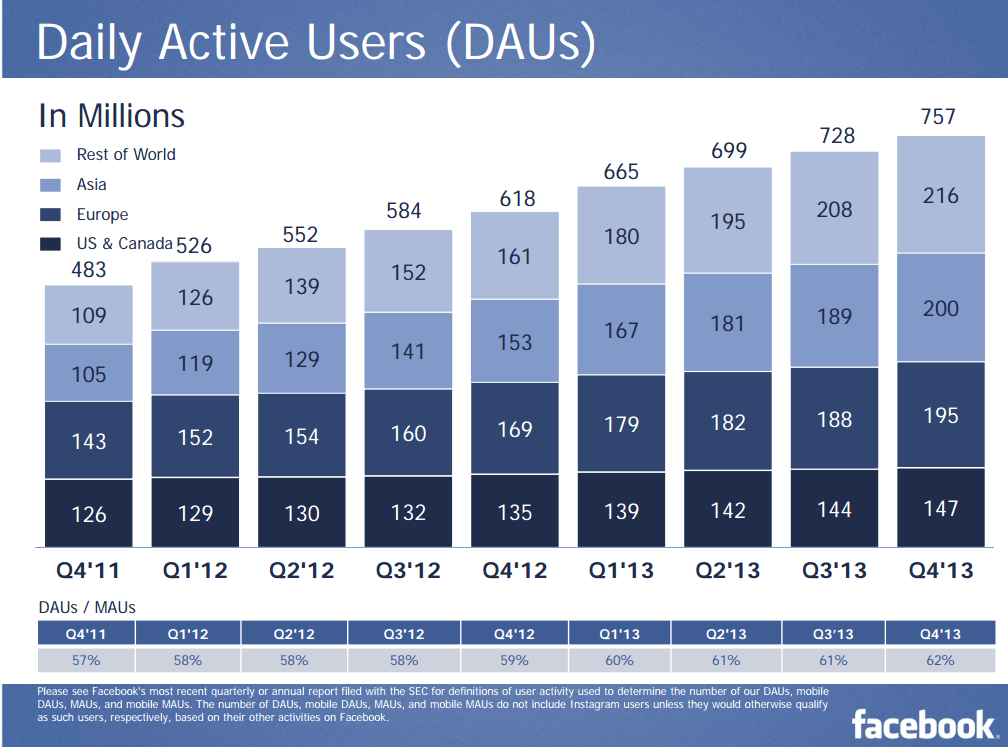 Looking at monthly active users (see graph below), you can draw similar conclusions. Compared to Q4 2011, the number of monthly active Facebook users in Europe have grown from 229 million to 282 million (+23%), while other regions have shown much faster growth.

At this point, Europeans make up less than a quarter of Facebook's global user base, but then again, that was already the case in Q4 2012.

Still, a record people in Europe now use Facebook, significantly more (+40%) than in the United States. 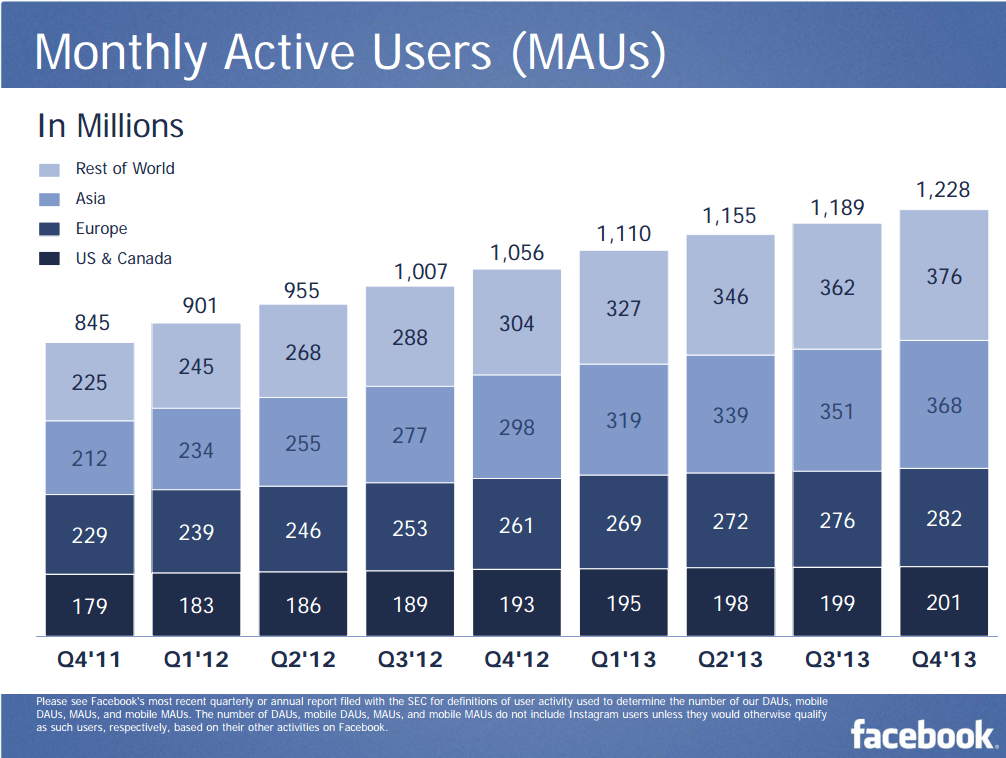 As for revenue, let's look at advertising revenue first, as it's the bulk of Facebook's income (only a fraction comes from payments and 'other' sources of revenue).

In Europe alone, Facebook booked a rather solid $658 million in ad revenue in Q4 2013, which is $40 million more than Asia and the 'rest of the world' combined.

It's also more than double the ad revenue brought in in Europe the fourth quarter of 2011, and very a significant jump compared to the full quarter prior to the last one; ad revenue jumped no less than 36.5% compared to Q3 2013. 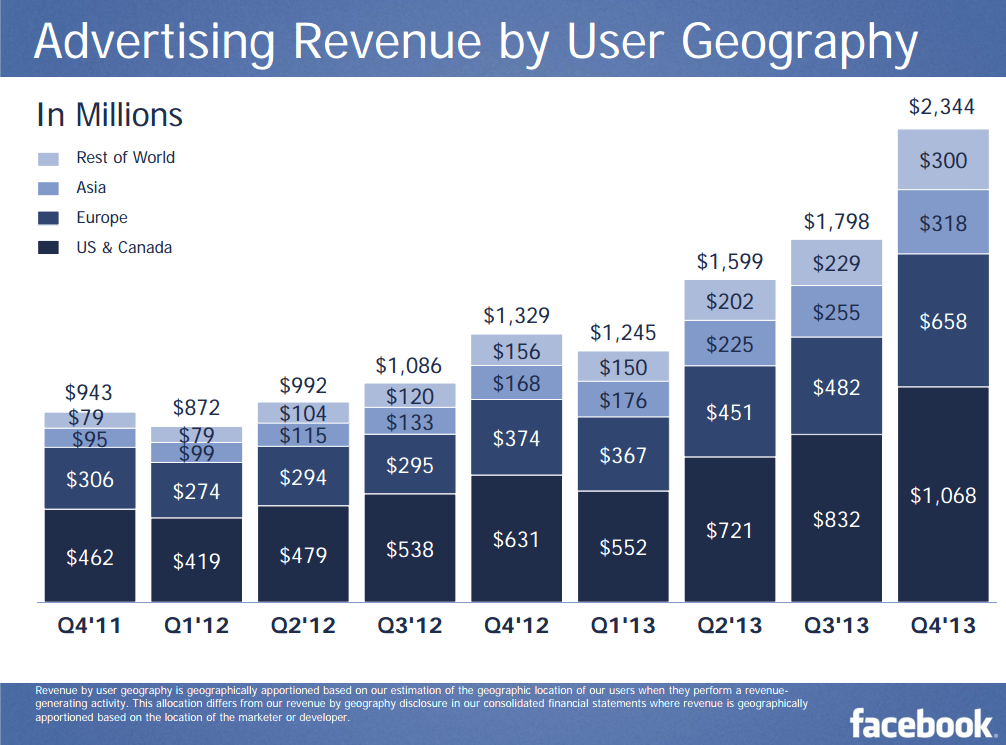 Overall revenue in Europe came in at $727 million for Q4 2013, more than double the revenue Facebook booked two years prior, in the fourth quarter of 2011.

It's record revenue for Facebook in the region by a long shot, and also an impressive 35% jump compared to the third quarter of 2013.

All in all, Facebook generated nearly $2.2 billion in revenue in Europe for the full year of 2013 (compared to $3.7 billion in the United States and just over $1 billion in Asia). 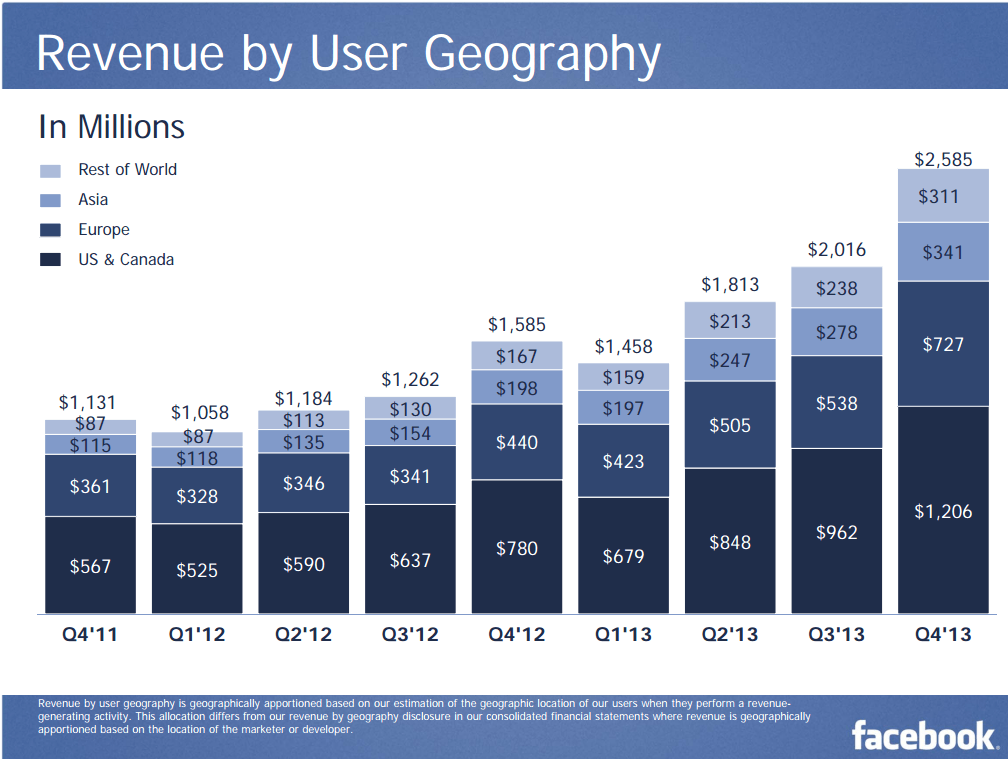 That's well above the worldwide average of ARPU, but still a long way from the average revenue per user in the United States (more than $6). Other geographies are not yet rising above $1 in revenue per user, as you can see in the graph below. 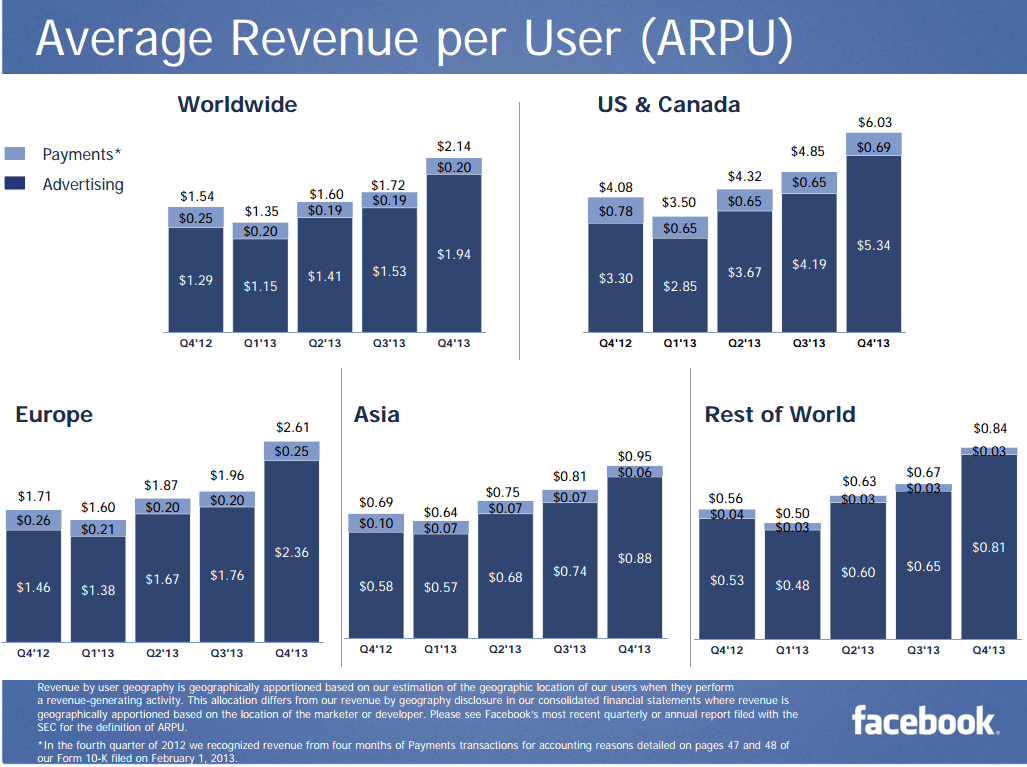 Facebook in Europe: 282 million monthly active users, $727 million in revenue (Q4 2013)
Comments
Follow the developments in the technology world. What would you like us to deliver to you?
All

NEXT
Open and big data in Europe: potential growth drivers, or a massively squandered opportunity?
Do big and open data have the potential to…
Robin Wauters