Online video tech firm Ebuzzing reports €50m in revenue for 2013, looks to the US for growth

French-British online video and ad technology company Ebuzzing says 2013 was its second profitable year in a row, reporting 50 million euros in revenue and an estimated 3 million euros in EBITDA for the year.

Its income from video advertising in particular saw growth, rising 41 percent to 45 million euros in 2014.

Last quarter, Ebuzzing made the jump overseas, and the company says it's already turned over $1 million in the US in December alone.

With offices in New York and Miami, Ebuzzing will likely make a bigger push into the States this year.

Founded in 2007 by Pierre Chappaz (of Kelkoo and Wikio fame) and Bertrand Quesada (ex-eSpotting), Ebuzzing bills itself as the fastest-growing online video technology company in Europe, with a global network covering 26,000 websites, blogs, mobile, tablet and desktop apps and social media sites in over 90 countries. On its website, Ebuzzing claims to reach over 1 billion unique users. 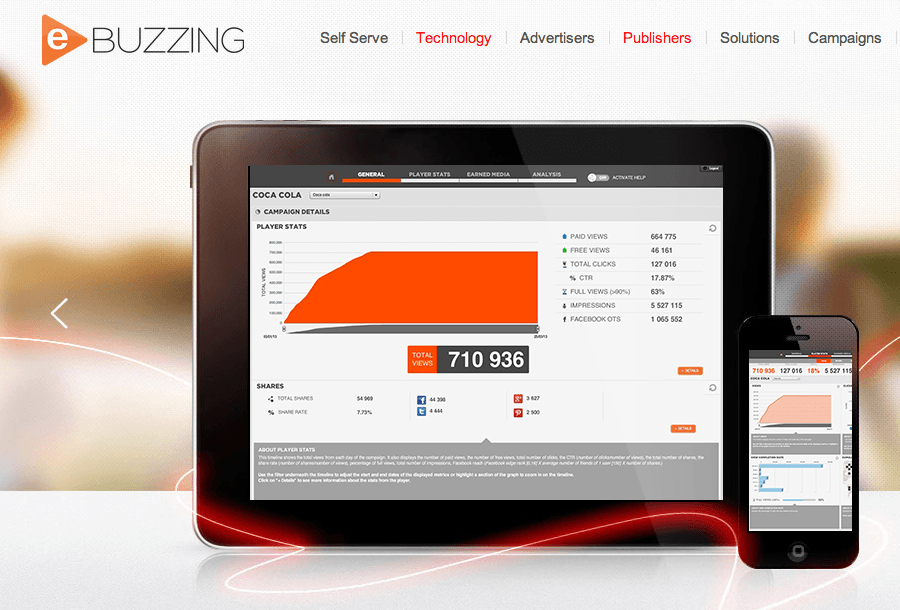 Ebuzzing says it differentiates by creating new video advertising distribution channels that leverage 'the interactive nature of the Web', rather than focusing on things like pre-roll ad formats.

Chappaz says 2014 will be 'the year of native video advertising':

“It is an exciting time for the industry and personally for Ebuzzing.

Our focus on technology allows us to develop formats enabling advertisers to target and engage with their audiences more effectively but also offering an alternative to publishers to better monetize their online content. This consequently protects the quality of their journalism without penalizing their readership.”

The company says it currently has over 250 employees with offices in NYC, London and across France, Italy, Germany, Spain, Luxembourg, Morocco and Dubai. It’s R&D department alone employs 50 people, the company adds in a statement.

Online video tech firm Ebuzzing reports €50m in revenue for 2013, looks to the US for growth
Comments
Follow the developments in the technology world. What would you like us to deliver to you?
All