Barcelona-headquartered Odigeo, the largest European company in online travel (and one of the leading online travel groups in the world for that matter) will be going public this year, reported Spanish business publication EXPANSIÓN yesterday.

It will likely be one of, if not the first tech IPO in Europe in 2014 and the first company - in tech or not - to hit the public markets in Spain since Bankia went public in 2011.

Odigeo is a huge and relatively unknown online travel conglomerate that came together in a quite unusual way. In 2010, Paris-based Ardian, the private investment company born out of Axa Private Equity, bought a major stake in Go Voyages (for 300 million - 350 million euros). At the time, Go Voyages was growing at a rapid clip (25% year over year).

A few months later, Permira, a London-based private equity firm that had already invested in Spain, snatched up eDreams, also a major player on the online travel space, for 250 million euros - 300 million euros.

At the time, eDreams was leading the space in Spain, Portugal and Italy and was on the verge of going public on its own. This operation was one of the largest M&A in the nascent Spanish technology industry.

Realising that the only way to dominate the European market as a whole was to partner up, Permira and Ardian led, in early 2011, the acquisition of Opodo, a company controlled by Amadeus, which had recently completed their own IPO on the Spanish stock exchange.

The three companies then merged some months later into Odigeo, a holding company with headquarters in Barcelona, Spain. Between all three companies, they controlled most of the European geography and had heavy interests, through eDreams, in Latin America as well.

The holding has been doing very well since then, and the last official numbers from Q2 2013 show a steady growth of both bookings (6%) and net profit (12%).

According to its website, it serves over 15 million customers every year. 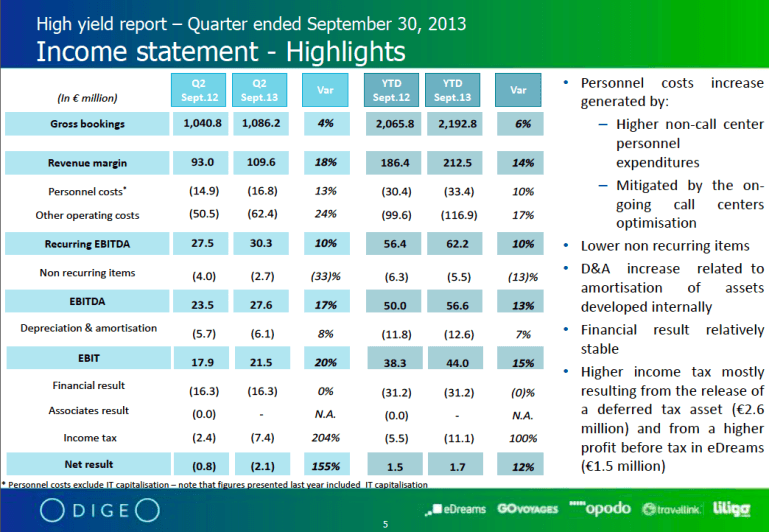 Sources close to the company tell tech.eu that the company has been undergoing, in recent years, a steady effort to consolidate their different properties and become more efficient. Last quarter's numbers and the recent acquisition of Liligo, a French metasearch engine, seem to confirm their intention of integrating all the travel niches.

The IPO is led by JP Morgan and Deutsche Bank and is reportedly in the final stages.

The company could go public in Madrid as soon as April and might become a candidate for the Ibex 35 index. Paris and London were also discussed as exchanges where it could go public but the consensus is that it will finally be Madrid, thus the reason for the new name, eDreams Odigeo, stressing the previously known Spanish company, eDreams.

According to some sources, the reason why they've chosen Madrid over Paris or London is due to the recent stabilisation of the Spanish exchange and the return en-masse of foreign investment into the country.

It's probable that this last factor is key to eDreams Ogideo, as the novelty of a new IPO and the positive signs of recovery will push the final price higher than in London or Paris.

If the IPO goes well, it will be great news for Europe and especially for Spain, signalling the recovery of the public markets for technology companies.

Online travel giant Odigeo (eDreams) prepares to float; plans to go public at $1.5 billion valuation
Comments 2
Follow the developments in the technology world. What would you like us to deliver to you?
All

NEXT
Fighting climate change, one credit at a time: a close-up of Changers
Think about the last time you were on the road and your phone battery died. Did you get…
Charmaine Li