If you were a wealthy person in love with very fast cars and you were more than happy to lay down a seven figure dollar or euro amount for a supercar, where would you go?

You might head to Modena in Italy to check out a Pagani. Another option could be the Valhall Park on the Ängelholm airfield in Sweden, headquarters of Koenigsegg where you could land your helicopter on a dedicated customer helipad. Or … you could come to Croatia.

Croatia? Isn't that the place with many islands and beaches and lots of tourists in the summer? Well… yes.

As of recently, however, this country with zero history of car manufacturing – unlike Italy – and not much industrial and engineering heritage – unlike Sweden – has earned a spot on the global map of supercar manufacturers.

The company claiming this spot is Rimac Automobili, headquartered just outside of the Croatian capital of Zagreb. The supercar you can buy here is the electric Rimac Concept_One.

Mate Rimac, the 26-year old founder and CEO, unveiled the Concept_One at the Frankfurt car show in September of 2011. I first met Mate (pronounced to rhyme with "latte", not "eight") a few months later, in May of 2012. It's been a hard, difficult few years since then, in a frustrating chicken – and – egg search for customers and investors. Things are looking up now – but I'll come back to that a bit later.

Unlike the Pagani Huayra or the Koenigsegg Agera or the Bugatti Veyron – unlike, in fact, almost any other supercar in the world, the Concept_One is an electric vehicle. Each of the four wheels is powered by its own electric motor, delivering a sum total of 1,088 horsepower, capable of reaching 100 km/h in 2.8 seconds with a maximum speed of 305 km/h and a range of 600 km on a single charge. The motors are liquid cooled, permanent magnet and synchronous. The "propulsion system", as the company calls it, integrates two 12,000 RPM motors with power electronics and reduction gearboxes.

"We didn't want to build the best electric car in the world. We simply wanted to build the best car, period." said Mate "Electric motors are so much better, so much more suited to power cars and other vehicles that it was a no-brainer."

Almost everything in the vehicle except the tires, windshield and airbags is designed in-house, and manufactured either by the company itself or by one of a handful of suppliers, all of them from Croatia.

The doors open by a touch of the palm; the A/V entertainment system is a touchscreen marvel. The core of the car, however, isn't the sleek exterior or the luxurious cabin – it's what lies underneath.

Mate Rimac and his team have designed and built not only the motors, but also the batteries as well as the battery management system. The 25-person company has survived the past several years by selling their knowledge, technology and engineering services to other companies, mostly car manufacturers looking to get into the electric car race as fast as possible. During this time, they received a very important seal of approval. The FIA has officially confirmed that Rimac has broken two world records for the quickest electric car, with three more pending approval.

"These records were broken not by the Concept_One but by our "test mule" housed in the body of the old green BMW which I drive to work every day. Once someone else breaks our records, we'll be ready and waiting to beat them back with the Concept_One!"

At a crucial stage, Rimac Automobili was able to obtain a small but vital loan from the government-backed Croatian Bank for Reconstruction and Development. Now, at long last, they have found investors willing to support their vision.

Investors from Colombia and Hong Kong

The first of these is Frank Kanayet Yepes, a wealthy and prominent South American entrepreneur of Croatian origin. With a background and career built in the oil and energy business, Frank is now investing in clean energy, producing ethanol from the cassava plant. He is also a passionate sports car enthusiast and a distributor for Ferrari and Maserati in his native Colombia. One of his cars is the Ferrari 599XX. Myself – I'm so ignorant when it comes to cars that I had to ask Mr Kanayet to repeat the exact name. "Ferrari 599XX" he said again, patiently, and continued "Only 33 have ever been built. You can't even drive it on the road, only on dedicated race tracks certified by Ferrari".

That's an interesting value proposition if you consider that this Ferrari, like the Rimac Concept_One, cost roughly a million dollars. Kanayet is also one of the investors in the Formula E electric car championship, set to roll out in September starting in Beijing.

I asked Frank to comment on why he decided to invest in Rimac Automobili. "The company is in exactly the right place at the right time" he said. "There are more than 800 million cars in the world, almost none of which are electric. The market share of electric cars will rise quickly from this small base, the world is ready for it. Tesla Motors has played a crucial role in establishing electric cars as a serious category, not just something exotic and experimental."

What, in his opinion, are the main challenges Rimac Automobili is facing? "Homologation – all the testing, including crash tests, that needs to be done to make the Concept_One street legal." What about the challenges of marketing and sales, of moving from a "mere concept" to production, even in small series? "No, I don't think there will be major problems or issues there. The homologation is the toughest one." Kanayet is both an investor – investing approximately one million dollars - and a customer, now eagerly awaiting the production and delivery of his electric supercar.

Soon afterwards, Rimac Automobili was able to announce another investment (still pending the paper and administrative work). This new investor comes from even further away. Sinocop Resources is a minerals and metals company listed on the Hong Kong stock exchange. On March 11 the company announced a non-binding term sheet agreement to buy 10% of Rimac Automobili for 5 million euros in cash and 2 million in stock.

"This finally gives us the capital we need to properly set up production and testing" Mate commented when we met recently at company headquarters. "We had more interest from other investors, but we didn't want to raise more money at this stage than we really need. Money is coming not only from investors but also from customers. We have six cars in the pipeline now, more than enough to keep us busy for a while."

Rimac plans to double his team to 50 people by the end of the year. He needs these people not only to build cars, but bicycles as well. As you might expect, these aren't just ordinary bicycles. 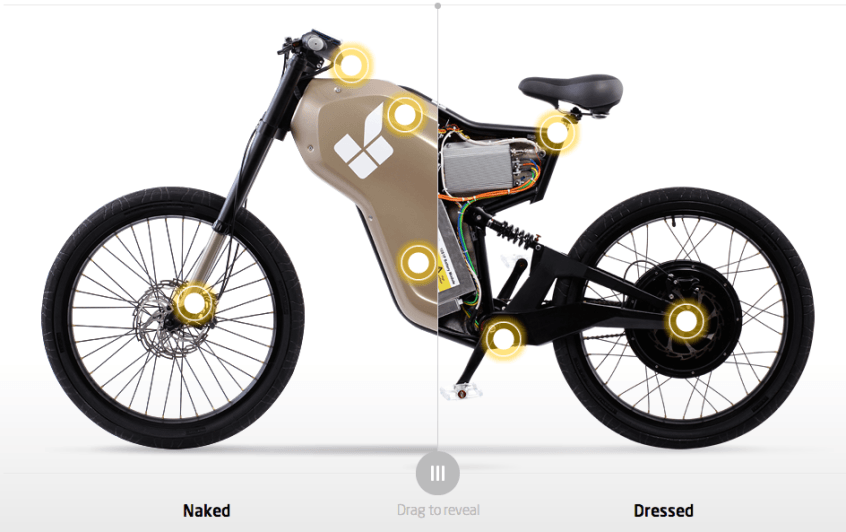 Marketed under the Greyp brand, the "G-12" model will zoom up to 65 km/h if you switch it from "street" to "power" mode. At approximately 6,000 euros, it's less expensive than the Rimac car but certainly more expensive than most bikes. "That's not a problem" says Rimac. "We have more orders for the bikes than we are currently able to produce. Our plan is to ship 100 G-12 bikes to customers by the end of this year."

Rimac and Kanayet both see an important third line of business in the future – electric power systems. The proprietary power technology developed for the car has many applications – from cars and other personal vehicles to trams, boats and buses. Could this line of business eventually dwarf his beloved supercars in terms of revenue and volume?

"I don't think so," Rimac replied. "we have a long-term plan of creating subsequent generations of less expensive models with more and more volume. Our plan is to build about 80 – 100 units of the Concept_One and then move to other models with target volumes first in the hundreds and then in thousands of units."

If Rimac has an idol, it's Nikola Tesla. Although there's another, somewhat larger electric car manufacturer which claimed Tesla's name for their company, that company is far away on another continent. Nikola Tesla had to emigrate from his native Croatia (then part of Austria-Hungary) to the US. Mate is pursuing his dream at home, just a few hours' drive from the small village of Smiljan where Tesla was born more than 150 years ago. With South American and Chinese partners on board, customers lining up and bikes and – soon – supercars being delivered from Zagreb to customers worldwide, it seems that Mate Rimac has no less of a claim on Tesla's heritage than mr. Elon Musk.

Green light at last: Croatian electric supercar startup Rimac Automobili in final talks with investors
Comments
Follow the developments in the technology world. What would you like us to deliver to you?
All