Helper or hegemon? How Uber's Head of Public Policy EMEA claims the company benefits EVERYONE

In the same week we published an interview with Uber Europe GM Pierre-Dimitri Gore-Coty, I had the opportunity to hear from the ride-booking service provider's head of public policy for the EMEA region.

Speaking at a late afternoon session at the Angel.me Summit in Brussels, Dominick Moxon-Tritsch reiterated Uber's game plan in trying to come up with alternative, convenient transportation in the world's major cities.

For those who have followed Uber's growth through aggressive expansion (and the legal issues that have already arisen as a result of that), there wasn't a lot of news to be picked up from Moxon-Tritsch's keynote, although the slides he used to illustrate the company's positioning vis-à-vis traditional taxi drivers were most interesting.

We figured we might as well publish them here for you to enjoy, as the event unfortunately wasn't recorded or live-streamed.

In one of his first slides, Moxon-Tritsch listed a number of bullet points meant to demonstrate how Uber really has benefits for everyone, ranging from end consumers to drivers to governments, and how the service actually promotes safety. 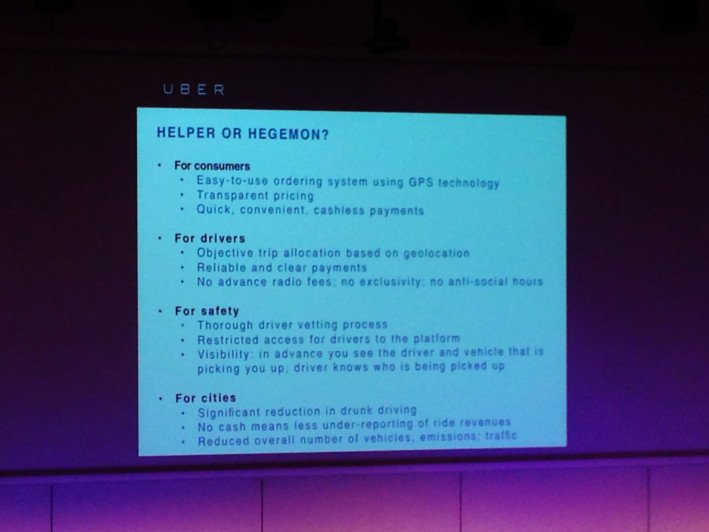 (In case it's not perfectly readable: this man took a better picture.)

By means of another slide, the trained lawyer explained why the tussle between Uber and traditional cabbies has gotten so "bloody", interestingly referring to the taxi driver protests that occurred across European metropoles as "a last desperate throw of the dice". 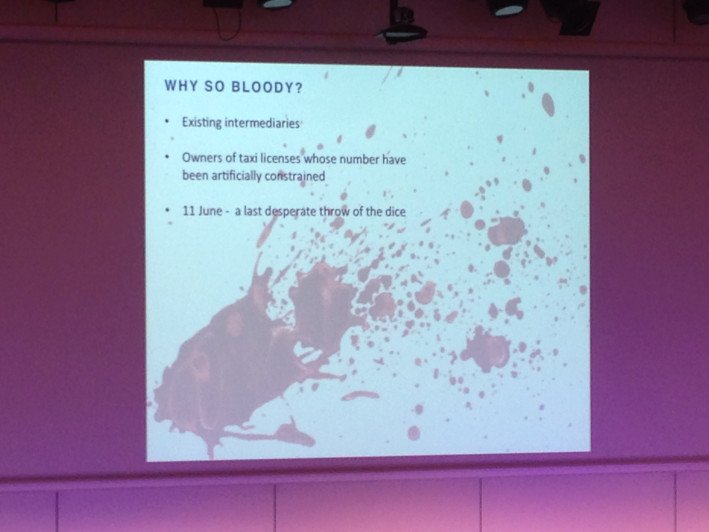 In a third interesting slide, Moxon-Tritsch talked about a 'cautionary tale' and how Uber tries to become a better corporate citizen (by getting 'regulated where they can be', for instance). Well, then. 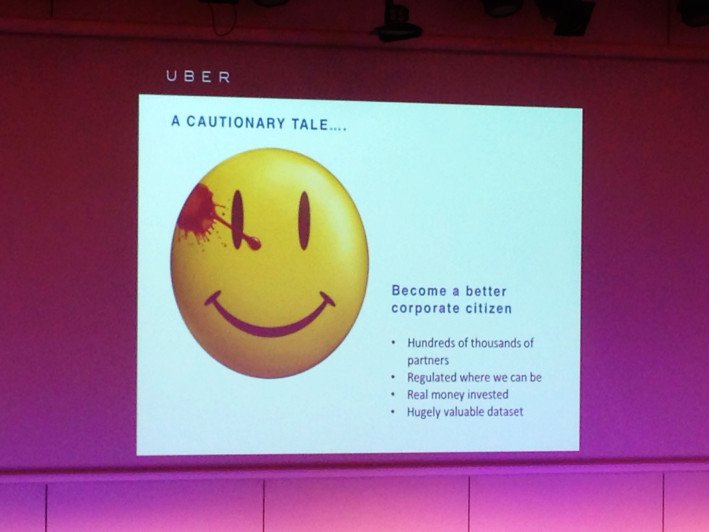 And finally, although this slide was unfortunately shared after I had to leave for a meeting, the Uber executive identified the 'hot spots' in Europe (meaning the locations where Uber is receiving flak either from taxi drivers, the local government or both), and cities where there's "medium risk" for more trouble - places like Stockholm, London and Amsterdam among them.

Moscow, Dublin and Rotterdam are, apparently, "quiet for now".

@Uber regulatory problems across the world in one slide #angeldotme pic.twitter.com/8fM4V26WYd

Helper or hegemon? How Uber's Head of Public Policy EMEA claims the company benefits EVERYONE
Comments 1
Follow the developments in the technology world. What would you like us to deliver to you?
All

NEXT
A wearable camera that automatically records your life: is Narrative the future or just plain creepy? (interview)
As part of my recent whirlwind tour of…
Robin Wauters