Berlin-based online fashion retail juggernaut Zalando says it's on track for a profitable 2014 after reporting strong results for the third quarter of the year, the first financial results it's shared after going public on the Frankfurt stock exchange in October.

Group revenues grew by more than 24%, Zalando said, to 501 million euros (which is exactly how much income it said it booked in Q1 2013, but is up significantly year-over-year as Q3 2013 revenue came in at 404 million euros).

In the first nine months of 2014, Zalando group revenues hit 1.55 billion euros (PDF), which is line with the numbers it reported for the first half of the year earlier. 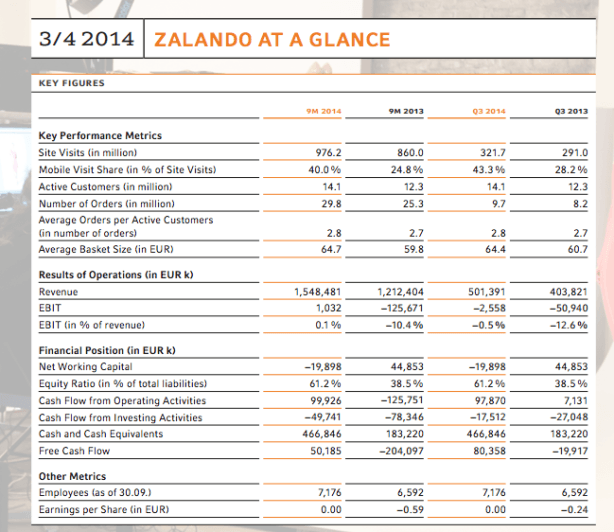 For the first time ever in a third quarter, Zalando further reported, the group reached EBIT break-even this year, courtesy of self-reported 'improved operating efficiency' and use of capital - Zalando says free cash flow was strong during the period at 80 million euros.

ALSO READ: An inside look at Sweden’s Kinnevik, the money behind Zalando and Rocket Internet

Zalando says growth in international markets was particularly strong, with revenues in the 'Rest of Europe' segment - all EU markets outside the DACH region in which the company operates - growing by nearly 40% to 198 million euros (Q3 2013: 141 million euros).

Rubin Ritter, Member of the Zalando Management Board, was particularly pleased with the fact that revenue growth was above market-average:

"Zalando's revenue growth continued to outpace the overall online fashion industry, which faced a difficult start to the fall/winter season due to unseasonably mild weather," Ritter said in a canned statement.

Zalando's number of active customers grew by 15% to 14.1 million, while gross merchandise volume per active customer grew by 12%. In total, Zalando websites registered 322 million visits in the third quarter of 2014.

Online fashion retailer Zalando "on track" for a profitable year as Q3 revenue rose 24% to €501 million
Comments
Follow the developments in the technology world. What would you like us to deliver to you?
All

NEXT
A VC's perspective  on 'Startup Poland':  A lot of noise, little traction
Editor's note: This is a guest post by Marcin Szelag, a Partner at SaaS-focused seed fund…
Marcin Szelag