Christian Lanng and his crew over at Tradeshift are building a distributed, cloud-based platform to handle the extremely difficult task of supporting global supply chains. Ivo Spigel finds out how the company got started and how it's doing in this profile of one of the best-funded Scandinavian startups.
Ivo Spigel 20 January 2015
Share
Facebook Twitter Linkedin

Rumour has it that Tradeshift got started over Twitter, in Abu Dhabi, by Morten Lund and Christian Lanng. When I asked Christian, the company's CEO, he replied: "Well... not exactly." We'll get back to this little episode, but first let's take a look even further into the past.

Like many prominent European startup founders, Christian got started by creating a Web agency in his native Denmark. After building it out for a few years he sold it to a larger marketing organisation.

Quite unlike most entrepreneurs, however, he then decided it would be a great learning experience to go work for the Danish government.

"When I got there, I saw some incredible inefficiencies," Lanng recalls. "So my colleagues and I created a system whereby any company providing services or selling goods to the government could use a standardised electronic invoicing system."

"This worked out really well, and soon became mandatory. If you wanted to invoice the Danish government for something you had sold or done for them, this is the system you would use. After initial adoption, all of the 70,000 companies doing business with the government were on board."

At about that time, Lund tweeted out a question asking if anyone on Twitter knew of any interesting work being done to make government more efficient. Lanng tweeted back a first piece of information about what they were doing. The pair met up for beers, and Lund could hardly believe the scope and success of Lanng's (and the government's) system.

The duo got into some heavy brainstorming about what impact this kind of system would have if implemented for some of the world's biggest companies, tying them to their suppliers and eliminating a ton of inefficiencies. Needless to say, it would have to be way up in the cloud.

Lund was headed soon for a conference about global innovation in Abu Dhabi and asked Lanng to tag along. On the flight there, Lund informed his newfound friend that he had secured a speaking slot for him, and that he had the time on the flight to hammer out a presentation for a high-level gathering of global e-government leaders. Thus Tradeshift was hatched over Twitter and in - and en route to - Abu Dhabi! In 2008, no less, at the beginning of the Great Recession.

Not many people have the energy and commitment to start building a startup while still holding a day job. Alicia Navarro of Skimlinks is a great example, having worked on her project in parallel with a regular job for more than a year in Australia before taking the plunge and moving to London. Christian Lanng stayed on in the public sector for about half a year. An early seed investment from Danish entrepreneur and business angel Klaus Lovgreen, as well as the growing demands of the Tradeshift project, prodded him to say goodbye to public service and devote 100% of his time to the startup.

As soon as the project had gotten started half a year earlier, Morten called out on Twitter for people interested in getting on board with an "awesome, super secret startup". More than 200 applications came in. Fourteen of those were selected. They were to work without pay, just for shares, until an investment and / or revenue started coming in. They came anyway, and from all over – not just Denmark and the US but also unexpected places such as Peru and Africa.

Fast forward to 2015. The company is best known to the general public as a "free invoicing app". In fact, it's a transactional platform for global supply chains.

A growing number of large global corporations and public organizations is using the platform for every business transaction they have with their suppliers and busines partners. Purchase orders, invoices, receipts, order confirmations... all of that "boring" paperwork that carries goods, services and money into and out of organizations runs through Tradeshift. In fact, the term "paperwork" symbolises an old, outdated state of mind that Lanng claims is inherent to his legacy competitors.

"ERP systems used to be all about automating paperwork," Lanng explains. "They are basically a way to "digitise" outdated processes, to 'make paper automatic'. The new generation of business means that we don't have to think that way. Yesterday, if I needed to find out whether I could take the risk of approving a buyer's request to increase their credit limit, I'd ask them for certified documents to back up their request. With Tradeshift, we have access to millions of transactions so we can provide that information on demand, in real-time."

I asked Lanng for some recent numbers, and he came through.

Tradeshift has 250 employees. Having raised $130 million, they are one of Europe's best funded 'scale-ups'. The year 2014 saw the company's revenue grow by 300% and the "network transaction value" by 600% - and not from a small base, as Lanng emphasizes.

All in all, about half a million companies worldwide are currently connected through the Tradeshift platform. The financial value of transactions runs into billions of dollars monthly. Today, some 10,000 – 15,000 of Tradeshift's customers are paying for the service on a regular, recurring basis. Twenty-five Fortune 500 companies are on the platform; half of these came on board last year and the company's management expects the number to triple in 2015.

This is all good and well, but a number I was particularly impressed with came when Lanng talked about a recent use case. A major US corporation moved 5,000 staff from SAP Finance over to Tradeshift, a major coup for the Danish company. 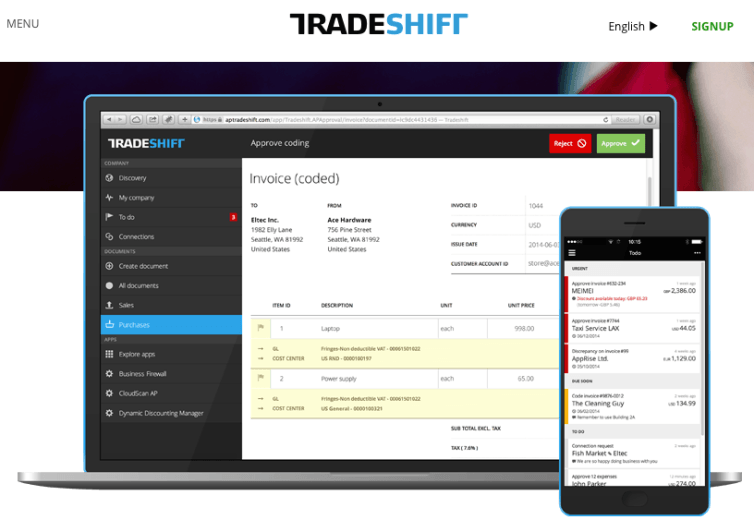 "That company, like many others, will continue to use SAP," posited Lanng. "SAP, however, like Oracle and other legacy systems, will fade in importance for this customer. Old-school ERP is moving from a mission-critical role into a role of 'archiving'", Lanng added.

"That's only natural since accounting, the central function of these systems, isn't really a core business function. Your core business is what you do with your supply chain. Tradeshift is, to draw a metaphor, like running a distributed SAP in the cloud. It's an extremely, extremely complex piece of infrastructure. This is one of the reasons why we needed all that funding – we need a large team of very talented and specialised people for product and project management."

The bulk of Tradeshift's funding came last year - and, notably, from Asia, which Christian says Tradeshift is extremely focused on. The company's massive $75 million round (in three tranches) came from a fund which very few tech.eu readers will have heard of – Singapore-based Scentan Ventures.

Lanng thinks that many, if not most, European entrepreneurs underestimate the importance of the East, so I asked the Tradeshift CEO to talk about Asia in some more detail.

"We've had an office in China since 2012," he recalled. "All we wanted at the time was to learn about the business environment, develop relations with the government and lay the groundwork for the future. Many European startups obsess about going to the US. To them, Asia is far away, complicated, mysterious and hard. They fail to grasp the importance of the Eastern countries and markets. Japan, in particular, is often overlooked. It's the third-largest economy in the world and is also very ripe and ready for change and innovation."

"Scentan is much more than a financial investor to us. They have deep experience in Asia and significant resources 'on the ground', helping companies – successfully – enter these markets. As a measure of their commitment to our partnership: the person leading the Tradeshift deal from Scentan's side has now moved to Japan in his new role as managing director for Tradeshift Japan."

As already mentioned, Tradeshift is best known publicly as a "free invoicing app" (which, by the way, is used by tech.eu). I asked Lanng what their revenue model i.e. how they actually make money.

"We have two main sources of revenue. The platform is free for small suppliers, to issue invoices to their customers. Large buyers, however, pay license fees based on two factors. On the one hand we have a typical SaaS model - a "platform fee" as well as a per-seat license. On the other hand, we are encouraging third-party developers to build apps on our platform. Then we take a cut of the app price, as well as a small piece of the transactions based on those applications. Currently our "typical" SaaS licensing is bringing in two thirds of the revenue. The licensing / transaction part, however, is growing much faster and will soon be our dominant source of income."

This crew has come a long way since Lanng and Lund brainstormed over beers and Twitter.

Yet it seems pretty clear to me that the story has only just begun.

"We will relegate SAP to the archives of IT" - an interview with Tradeshift CEO Christian Lanng
Comments 5
Follow the developments in the technology world. What would you like us to deliver to you?
All