Want to build a website but don’t have extensive coding knowledge? Fear not, because there’s a number of companies that want to help.

The first ones that come to mind: Tel Aviv-headquartered Wix, which boasts 60 million users on its platform and raised about $58 million in funding before going public in November 2013.

Or New York-headquartered Squarespace, which claims “millions” of websites have been created with the platform and is backed by approximately $78 million in financing. Or San Francisco-based Weebly, which says over 20 million people have started a site with its service and has raised reportedly nearly $36 million in funding.

In a space where most players are heavily funded by venture capital firms, Hamburg-headquartered Jimdo is an anomaly. The company received a modest €500,000 investment when starting out and has since grown to help build more than 12 million websites without receiving any additional VC funding, said Jimdo CEO Matthias Henze in an interview with tech.eu. Although it may not measure up to Wix or Weebly yet, the company has been profitable since 2009.

After Jimdo recently announced a strategic partnership with fellow online graphic design marketplace 99designs, we caught up with Henze to talk about the company’s beginnings, how choosing a website-building tool is like buying a car and what’s been most important in the entrepreneurial journey.

Standing out in a crowded space

With the sheer amount of companies offering website building tools, the burning question is: what sets Jimdo apart from competitors?

“I think all of the players have their strengths and weaknesses and our strength is definitely in the e-commerce and mobile area and, of course, we think our service is the easiest to use, but I guess everyone says that about their own services,” responded Henze candidly. “It’s a little bit like car brands to us. All cars basically take you from A to B, but you have your preferences. Each brand has their strengths and weaknesses and you go with the one that fits best to you.”

Founded by Henze, Fridtjof Detzner and Christian Springub (pictured below) in 2007, Jimdo has gone down an interesting path in regards to funding when compared to its heavily backed competitors. 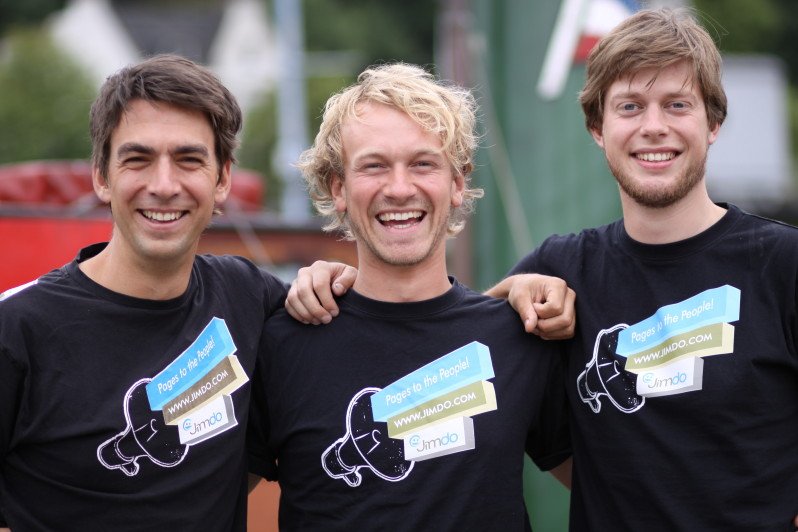 In addition to taking €500,000 in angel funding at the start, Jimdo also received a $20,000 from a business plan competition early on, said Henze. However, after a stint with United Internet, the company seems to be adamant on financing growth out of its own cash flow.

In 2008, United Internet acquired a 30% stake in Jimdo, only to see the company buy back its shares a year later. Although Jimdo got along “well” with United internet as an investor, it didn’t want to “have to justify decisions to a board”, said the founders in a blogpost.

Remaining firm on its stance towards independence as company, Jimdo later declined an eight-figure venture round in 2012. In a blogpost by the founders explaining the reasons why they refused the funding, they said:

Sustainability By taking a venture round, you basically commit to an exit. There are usually only two ways this can happen: a sale (to a big corporation like Google, Facebook, or Microsoft) or an IPO. Selling (out) to a big corporation is not an option for us. We're building this company for the long run. We want to see Jimdo and everything it  stands for as a proud and independent entity, not subsumed into some corporate behemoth (see Christian's post "Dear Entrepreneurs, please don't sell your company").

And an IPO? Well, unless you're an extraordinarily successful company like Apple or Google, publicly-traded and sustainable just don't fit together. Shareholders interests are short-term, looking at the next quarter’s profits. But we believe that decisions made with the long view in mind are better for the business and the company’s bottom line. We think long-term and walking away from venture capital means we keep the freedom to make decisions that way.

Fahrvergnügen What made the decision very easy is that the three of us are not driven by material success. Driving a Maserati or living in a big house wouldn't make us any happier. A big exit to make lots of money doesn’t excite us. For us, Jimdo is a one-time chance: we have a great product, a great team and lots of opportunities ahead.

It’s an interesting take and seems to be working for them. Since Jimdo’s founding, the team has grown to 200 people across its offices in Hamburg, San Francisco and Tokyo.  The platform is also available in nine languages.

Although Jimdo was founded in 2007, the idea and basis for the company goes back as early as 2004 when NorthClick, the precursor to Jimdo, was launched. Considering how the company has evolved and sustained itself through these years, we were curious hear more about Henze's entrepreneurial journey. In particular, what his most important learnings have been.

"First of all, it was definitely really helpful to have a good founding team. For us, we're three founders that have been working together for 11 years now and it’s really to great to have a team where you get along well and have complementary strengths. This is what’s make it so much fun," he responded.

"Second, is that we’ve always focused on our strength, which is really the product. We also have close relationships with our users and it’s what everyone says but it’s really important to know where the market is going. Fourth is focus on company culture, that's something that we've done a lot and when wet set up the company."

"We're really proud of the team that we built up as an organisation," Henze added.

If anything, Jimdo is a good example of how entrepreneurs can succeed without swimming in a sea of VC funding. For more stories like theirs, check out the 'bootstrapping' tag.

How Jimdo built a profitable business on the cheap, and enabled the creation of 12 million+ websites
Comments
Follow the developments in the technology world. What would you like us to deliver to you?
All

NEXT
Can the sharing economy fix broken cities?
Around the world, as urbanization increases, inequality rises, and city logistics and services…
Dianne See Morrison