tech.eu's Charmaine Li paid a visit to Berlin-based Auctionata, an oft-talked about and rather heavily funded startup that is trying to bring the fine art and luxury object auction experience online.
Charmaine Li 04 May 2015
Share
Facebook Twitter Linkedin

Locked vaults filled with watches. Antique Chinese snuff bottles. Wine fridges. Huge crates overflowing with paintings. These are not things you’d typically expect to find at a typical tech startup office, especially since we live in an age where the world's largest taxi company owns no vehicles and the most valuable retailer has no inventory.

So it's a strange feeling to walk through Auctionata's headquarters, where there seemed to be more objects sitting at desks than employees.

Launched in 2012 by Alexander Zacke and Georg Untersalmberger, the startup aims to replicate the entire traditional auction experience – including valuation of items, live auctions and bidding – online. Auctionata, which employs a business model similar to traditional auction houses, specialises in the areas of fine art, antiques and luxury objects.

In March 2015, the Berlin-based startup announced a €42 million Series C funding round to further grow its business. Following the news, it was reported that Auctionata cut a portion of its Berlin and New York staff. As I was guided through the office, it was hard not to notice the many empty seats dotting the rooms. When asked about the layoffs, the company didn't disclose any numbers.

However, Untersamberger said that Auctionata’s team is currently around 300 people across its offices in Berlin, London, New York, Zurich, Rome and Madrid. 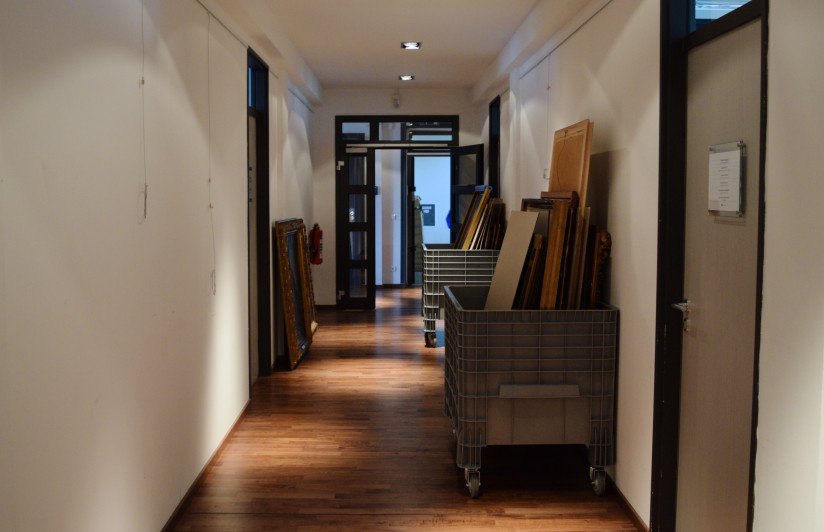 The company made headlines in 2013 when Egon Schiele’s water colour Reclining Woman (1916), which sold on the platform in 2013 for €1.8 million, broke a record for the highest price for an artwork offered on an online-only auction. Nevertheless, prices from online-only auctions have yet to reach those from century-old auction houses like Sotheby’s and Christie’s. Last year, the object that sold for the highest price via Auctionata was Pan Tianshou’s woodcut on paper Bamboo Rocks, for €610,500.

However, that might be about to change. A 2014 report by art market researcher ArtTactic and Bermuda-based insurance company Hiscox Group estimated that the global online art market would climb from $1.57 billion in 2013 to $3.76 billion in 2018.

Aside from Sotheby's and Christie's, one of Auctionata's main rivals is NYC-based Paddle8. Launched a year before Auctionata, Paddle8 employs around 100 people and also positions itself as a virtual auction house for the modern collector. It reported total sales of $17.8 million for the first half of 2014, whereas Auctionata recently revealed sales of $41 million in 2014. It’ll be interesting to see how these two well-backed companies continue to compete to reframe the art market. 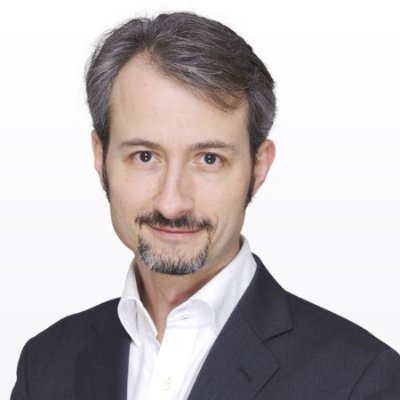 With the latest funding boost, we caught up with Untersalmberger, Auctionata's co-founder and CTO, at the company’s Berlin office, where we chatted about the company’s patented technology, got a peek into its logistics center and meticulous processes and talked about what's next.

tech.eu: Can you start by telling our readers briefly what Auctionata is and how it works?

Georg Untersalmberger: Auctionata is a place to sell and buy pieces of fine art and luxury objects. So not factory-used stuff nor an online gallery for art, but a secondary market for luxury goods and art.

It came from Alexander . Between 1997 and 2005, he was doing a lot of business via eBay and at the beginning it was great and people were spending huge amounts of money, but over time, he realized that eBay’s brand was being damaged by all the fakes that went into the platform.

Zacke had his own clients, so he was able keep a certain price point, but he was unable to attract any new customers because many people because thought that spending more than $200 on eBay might be a risk for them. Over time, he lost the opportunity to sell items that were from a couple of hundred euros to a tens of thousands euros via eBay. So the idea came from this problem – there was no place at that point in time, where it was possible to sell pieces of valuable art and luxury objects online.

How did you meet your co-founder?

We were introduced by a common friend of ours in Vienna. Alexander told me his story and basically said, ‘Okay, if eBay isn’t going in the direction I need it to in order for me to be able to sell, I'll build something on my own.’  At the time I was like, ‘This guy’s just crazy.'

But, in the end, it was a challenge so I agreed.

When people ask me what I think is required to be successful, especially in the online business, I usually say, ‘You’ve got to find the right partner.’ This is exactly the case with Alexander and I, because we come from entirely opposite areas, but I have a bit of an art background and he also has a bit of tech background with his experience with eBay. And it's a good fit. It’s all about finding the right partner with the right challenge.

What would you say is the biggest difference between Auctionata and other rivals in this space such as Paddle8 or leading auction companies like Sotheby’s and Christies, which also offer an online component?

Christie’s and Sotheby’s approached the market from their offline appearance and customer experience. Their brands are built upon the physical presence at certain places and are fueled by an upper class experience and treatment that comes when you go to their auctions. However, we started Auctionata and built it on an online experience. We offer an online experience from the very beginning, when valuing a seller’s object, to the very end, when the buyer purchases the item. This aspect is very much broken at traditional auction houses, even if they offer an online bidding channel.

On the other side of the spectrum, like Paddle8 for example, they offer a rather reduced service for customers. They more or less provide a platform and leave the customers on their own. We are somewhere in the middle, because although we do it the digital way, we offer the entire service chain that auction houses like Christie’s and Sotheby’s do as well.

Can you expand a little bit about the technology aspect of the company?

That’s a huge thing. It’s important to understand when I say Auctionata is a place to sell high-value items that it’s not like how you can or would do it on eBay, where you just put it there in whatever context. Each sale that we do is a curated sale. This means we have our expert teams – partially in-house and partially a network of experts around the globe – working on the valuation, publication and presentation processes that make sure the items are identified and the right price point is identified. We also give a guarantee to the buyer that what has been described with regard to the object is accurate.

All these processes with distributed teams and participants are rather complex and require small applications that need to work together. The entire technology stack that we have built consists of various technologies. Currently, the major part of our application is Node.js on one side and C# .NET on the other side. When it’s more about the business processes and commercial data, we’re more on the C# .NET side, and when it’s more about consumer front and rich applications, we use the Node.js stack.

Can you talk a bit more about the real-time auction system used by Auctionata that is patented?

There is a patent on one of the features we’ve built. It’s the scaleability feature for the online live auction that allows a huge amount of people to bid at the same time and also guarantees that the first bid is taken into consideration appropriately.

Last month, the company announced a €42 million Series C funding round – what are you planning to use the money for?

We’ve been on the market for three years now... We’ve tested a lot of things – from categories to services –  and we learned where we’re successful. Now, we’re focusing on these successful areas and growing within them. We’re using the capital partially to invest in certain categories, which we know are successful, in order to grow them and get them to be profitable as soon as possible. We’re also investing in improving the live auction experience. We’re in a phase where we need to build the company in a sustainable manner. This means that when we invest money these days, it’s not about testing something for the sake of testing, it’s really with a distinct objective. For example, growing a certain category to a certain extent, or grabbing a certain market share.

Why did you decide to start the company in Berlin, and not in Vienna?

It’s a discussion I always have with people in Austria, and particularly in Vienna, because in Vienna there are no digital businesses at all. When you’re starting a digital and online business, you need the right environment, you need people that who can work for you with the right skill-set, therefore you need a place where people want to go to because they think it’s the right place to be.

You need investors that believe that because you’re in a particular environment, you can be successful and find the right people there.

At that point in time, but it would not have been different today – we would have done the same thing – we said, ‘In Vienna, we won’t be successful.’ When we started, we tested some things out, but together with the first VC we had on board, we decided to go to Berlin.

There, we found the right people and it’s something we needed to do to attract more investors. And this is the right environment to run a digital business.

What can we expect from Auctionata in the next 12 months?

It will not change that much... The look and feel of Auctionata will be improved. It will look nicer, we will come up with some new technologies. We’ll also be the first ones to come up with mobile capabilities that have a near-no latency live-stream auction that you can participate in. We’re already on the iPad, but we’re going mobile on the product-side and close to launching it.

The interview was condensed and edited.

READ MORE: How tech is changing the world of art – 10 exciting European art startups to watch for

Featured image credit courtesy of Auctionata. Image of Georg Untersalmberger via LinkedIn. All other office images by tech.eu.

Going once, going fast: Berlin's Auctionata aims to digitise and democratise the auction experience
Comments
Follow the developments in the technology world. What would you like us to deliver to you?
All

NEXT
15 European startup associations unite to urge Commission to put innovators at heart of Digital Single Market strategy
Today, I will be attending a Startup Europe…
Robin Wauters