Hanna Aase, founder of video-profiling startup Wonderloop exchanged a series of 'snaps' with serial entrepreneur Evan Luthra, which ultimately led to him investing in her company. Quite the story.
Neil Murray 22 June 2015
Share
Facebook Twitter Linkedin

Wonderloop, the Norwegian founded video profile startup just closed what appears to be the world's first ever deal to solely be conducted over Snapchat, recounts founder and CEO Hanna Aase.

Exchanging snaps with serial entrepreneur Evan Luthra they closed the deal entirely over the messaging service, with the only email being sent between the two being the term sheet itself.

Hanna Aase confirmed the unconventional deal on LinkedIn and via Facebook this afternoon: 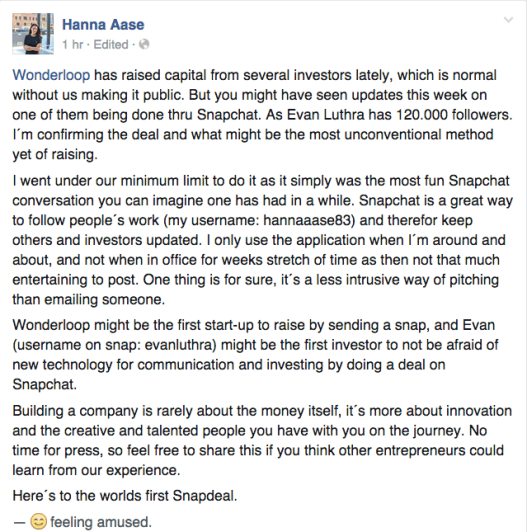 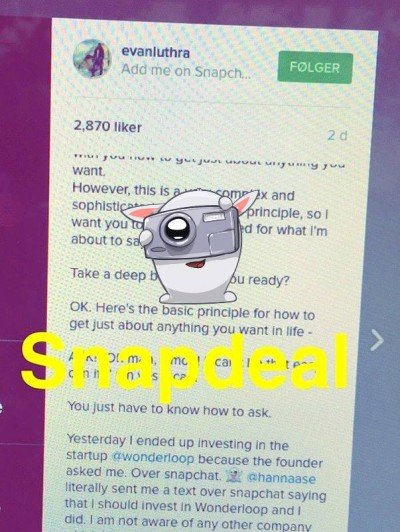 Hanna believes that 'Snapping' people, including investors, is a lot less intrusive than email, while on the investor side it's certainly an interesting way to widen your dealflow, meaning we could see an increase in deals like these in the future, implicating that the term 'Snapdeal' could be a word to add to your vocabulary sooner rather than later. If you weren't already familiar with India's largest shopping site, of course. Next up, a Tinderdeal?

Norway's Wonderloop just closed the world's first 'snapdeal' by raising funding over Snapchat
Comments
Follow the developments in the technology world. What would you like us to deliver to you?
All