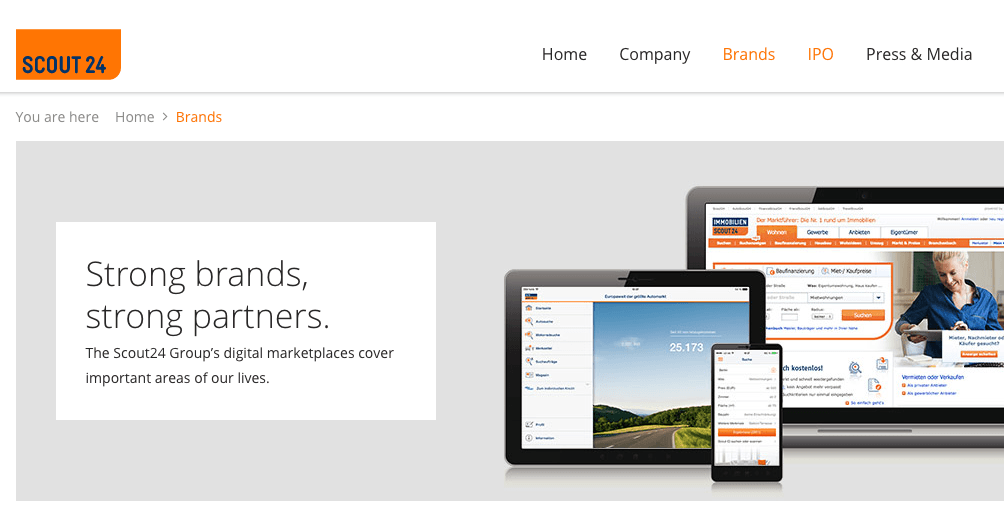 German digital classified ads company Scout24 started listing its shares on the Frankfurt stock market today. Priced earlier at 30 euros per share, the company had a successful debut on the exchange as shares quickly rose above the offering price.

The IPO gives Scout24 a market value of around €3.2 billion ($3.6 billion). The total issue volume - including greenshoe - was approximately €1.16 billion.

A total of 38,640,000 shares were placed, Scout24 clarified. Thereof, 7,600,000 shares result from a capital increase, corresponding to €228 million in gross proceeds for the Munich-based company.

In addition, a total of 26 million secondary shares were placed by Deutsche Telekom (Scout24's former owner), Hellman & Friedman, Blackstone and other current shareholders.

Its IPO was accompanied by Credit Suisse and Goldman Sachs. The prospectus can be found here (PDF).

IPO day for Scout24: German online classifieds group valued at €3.2 billion on stock market debut
Comments
Follow the developments in the technology world. What would you like us to deliver to you?
All

NEXT
OSCON: A/B testing at Booking.com - and preparing to be wrong
Editor’s note: This is a sponsored article, which means it’s independently written by our…
Jonathan Keane