Countdown to Mobile Sunday 2017: here's what to expect (program)

It's just a few more days until Mobile Sunday, the annual premier networking event in Barcelona that takes place the evening before the Mobile World Congress and 4YFN madness kicks off.

Like last year, we're co-organising the iconic event together with Rudy De Waele (shift2020), with the support of our kind sponsors Nasdaq and Skyroam.

You can still grab tickets for the event if you're going to be in or near beautiful Barcelona next Sunday. We have free beers thanks to our venue partner (Antiga Fàbrica Estrella Damm), street food, and top-notch networking with startup founders, investors, executives, journalists and industry pundits.

But what we also have is a fantastic line-up. We want to make Mobile Sunday an enjoyable but also inspiring evening (6-11PM), so here's what to expect on stage:

- A fireside chat between yours truly and Ben Evans from Silicon Valley VC firm Andreessen Horowitz ('a16z'). His Twitter bio says he's "trying to work out what's going on, and what happens next". We'll see what he's worked out so far.

- Startup Sesame founder Ben Costantini is going to moderate a panel with people who work inside or with big corporations to create or invest in real innovations. The participants are Barbara Belvisi (Hardware Club), Karolina Korth (digital health scout at Roche), Gregor Gimmy (BMW Startup Garage) and Rune Theill (who runs Rockstart).

- The New York Times' Mark Scott is going to have a fireside chat with Gagan Singh, SVP and GM of Avast Software; he runs the fastest-growing business unit within the company, with more than $100 million in annual revenue and over 150 million users.

- Next up we'll have a keynote by Efrat Fenigson, self-described 'mother of drones' and conveniently also VP of Marketing at Airobotics, a world leader in automated drones for industrial purposes.

- Silicon Valley veteran, and currently investor and global startup evangelist at HP, Vitaly Golomb will be on stage to talk about his many learnings, and to present his brand new book: 'Accelerated Startup'. We hear he's bringing a few copies.

- Also gracing us with her presence is Sabeen Ali, founder and CEO of AngelHack, who is on a mission to build "the world's largest developer ecosystem". We'll hear from her how she's planning to do that, and how it's going so far.

- BloomingFounders CEO Lu Li will take the stage to present her book, Dear Female Founder, which features 66 trailblazing female entrepreneurs from around the world.

- One of those featured entrepreneurs, 30minMBA founder and CEO Therese Gedda, will show us in a keynote why she made the book.

- Next up, global technology journalist Jennifer Schenker will have a fireside chat with Cory Jones, VP of Global Marketing & Product at Skyroam, which enables secure global WiFi access for mobile, IoT, M2M and wearables devices through its patented vSIM technology.

- What would this kind of event be without startup pitches? Joining us on stage for those will be Canay Atalay from Patica, Christian Smith from TrackR and Julia Petryk from MacPaw.

- In the closing fireside chat, yours truly will be asking how Fairphone is doing in its quest to build the world’s first ethical, modular smartphone for the masses. Who better than CEO Bas Van Abel to enlighten us?

- The evening doesn't end there. During drinks and networking after the official part of the event, we'll have the pleasure of DJ Oisin Lunny spinning some great music.

Seriously, how much more convincing do you need? Grab your tickets here. 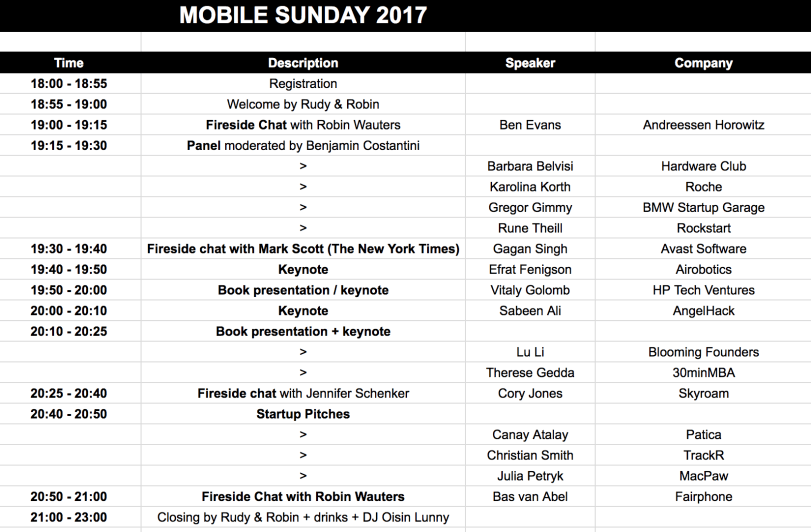 Countdown to Mobile Sunday 2017: here's what to expect (program)
Comments
Follow the developments in the technology world. What would you like us to deliver to you?
All