Tech.eu Insights creates insight and guides strategies with its comprehensive content and reports. Browse popular Insights content.
Examine the effects of the latest technology with the Tech.eu lens, see the details and create powerful strategies. Take immediate action to access exclusive articles and reports.
Review Advantageous Packages
Does your company have Insights access? Check it
Interviews

Last month, the European Union's Environment Agency released a landmark report with a shocking finding: 412,000 Europeans were killed prematurely due to poor air quality in 2016 (the most recent year data is available). Thousands more across the continent suffer from medical conditions attributed to poor air quality, including heart disease, lung disease and strokes.

Worldwide, the numbers of those affected by poor air quality are even more stark. The World Health Organization estimates that nine out of ten people worldwide are breathing polluted air, causing seven million deaths yearly. While the consequences of poor air quality are severe, one of the challenges with developing adequate solutions to address this international problem comes from the lack of high-quality local data.  Without reliable street-level data, it is difficult for cities to adequately triage local pollutants, as well as to measure the reliability of solutions.

The lack of local air quality data became a challenge for Wiktor Warchałowski, Michał Misiek, Aleksander Konior and Michał Kiełtyka when they were preparing for a local marathon. However, running a marathon in a country with "some the most polluted air in all of the European Union" at the time was going to be a challenge, so to be safe the group wanted to identify the streets that would be the least polluted to run on. Unfortunately, they found the nearest air quality sensor was kilometers away. There was no way for the friends to know exactly where would be healthiest to train. Undaunted, the engineers decided to build their own solution. Building the hardware's casing themselves, they developed an air quality sensor that could measure street-level air quality and the software to track it. The team went on to found Airly in Cracow in 2016.

Today, Airly provides both a hardware and a software solution for cities to take charge of air quality measurement. Since their founding, the firm has sales in 20 countries and has one of the world's largest air pollution sensor networks. I connected with Wiktor Warchałowski, Airly's CEO to learn more about their startup journey and what they've learned about building both a hardware and software solution to measure one of the world's most pressing problems.

tech.eu: Hi Wiktor! First, could you introduce yourself and tell us a little bit about Airly?

Wiktor Warchałowski: I'm CEO and co-founder of Airly and we are doing solutions for monitoring and forecasting for air quality. So this is a hardware and a software company. We are providing a complex solution, which is sensors that are measuring air quality in real time, then they are sending data to our platform to our cloud. And we are providing mobile applications for Android and iOS, but also web platform so our customers or users can enter our website and check air quality where there are devices installed.

tech.eu: What are some of the things you're learning about air quality from your sensors?

WW: As compared to one, expensive and very precise station provided by government, we are installing a network of local sensors and this network of sensors has amazing advantages. First of all we are showing cities and our customers air quality coverage of whole city. Instead of one point with the data we are taking hundreds of data points and from that we can show sources of pollution which is extremely important and also we can predict air quality better. And this is something because we are based in Cracow in Poland and there was a huge debate for ages, what is the source of pollution. And people were thinking that this is because of cars, and some of them were thinking that it's Cracow based problem but it turned out that the biggest problem comes from villages around Cracow and basically in the evening people are starting to burning coal and wood and then, pollution comes to Cracow. Our sensors are a powerful tool for cities and also for businesses to make better decisions about air quality.

tech.eu: Why is monitoring air quality so important for human health? And what are some of the potential downsides of breathing bad quality air?

WW: First of all, air pollution has a huge impact on our respiratory system. There's a strong correlation between high levels of pollution and heart attacks, but also there's some research that it has an impact on our brain, also on our intelligence. The research is now showing that air quality is a huge problem and nine out of ten worldwide people are breathing bad air. In other words, there are more people that have access to clean water than to clean air. Today, air quality is one of the biggest environmental threats in the world.

tech.eu: How did you begin to develop Airly? How did things get started?

WW: Together with Michal, Alexander and Michal, we wanted to run a marathon - the biggest marathon in Cracow. We wanted to avoid air pollution during our training. But the nearest official monitoring station was a few kilometers from us. The data was not up to date. So we - as engineers - created the sensor and we wanted to measure the local air quality in every part of the city. We were thinking that it's so obvious that we should get real-time data from our neighborhoods right down to street level. So that's why we created the sensor and at the beginning, it was just for us. But after a few weeks, we showed it to our friends and our family, we were asking them about their local air quality and most of the people, they claimed that they don’t know. So that's how we got started.

After three years, we have over 2500 devices installed and we are informing millions of people about their air quality. 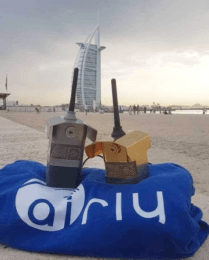 tech.eu: If someone wants an Airly sensor, how do they get one?

WW: Today, we are working with cities and businesses. It's not a b2c product, it's not for individuals, we are providing a system not a single sensor. For example, if a city is interested in an Airly solution, we are meeting with them, we want to advise them, we want to create the best network of devices for our customers.

tech.eu: You are a very accomplished founder at a young age--you’ve been named one of the 25 under 25 in Poland. What's something you've learned on this journey so far that you would like to share with other founders that are maybe just getting started or beginning their journey?

WW: From my perspective, the most important thing is to hire the best people. It's so obvious, but not everybody is thinking that way. When I am speaking with a lot of founders, and they are thinking that they're the best salesman, the best financial analyst, the best software developer. But my perspective from day one was to hire the best people and give them autonomy, and trust them. And that's how we started. We hired senior positions, and we gave them freedom and trusted them. I think this is the most important.

tech.eu: Your company is based in Cracow. Can you tell us a little bit about Cracow, the startup ecosystem there and why it's been such a great kind of home base for you?

WW: In Poland, I think there are two big startup communities-- first in the capital Warsaw and second in Cracow. I would say that Cracow is more tech-oriented. They're very good, with very strong technical universities. In my opinion, there are more deep tech startups in Cracow, but Warsaw, the companies are more business or finance-oriented. In Cracow, we have a strong community it's called #OMGkrk. And you can you can find a hash #OMGkrk on Facebook and Twitter.

It's good to see that in Cracow and in other cities in Poland, the startup ecosystem is growing so fast because the economy is growing. And then there's also growing diversity, and that feels wonderful.

tech.eu: You and Airly have been on road lately at a number of events. I’ve caught up with you in Slovenia, and also in Vienna. What's one of the big outcomes you hope to get from being at these events?

WW: First of all, events are a great place to meet people from all over the world. In the startup world, it's all about the network. I've met one woman from a VC fund yesterday and she said that she was speaking to one guy from another VC fund, and he told her about us so it's a small word. This summer, we have been in Barcelona, in Lisbon, right now in Vienna in a lot of cities around Europe and we have we meeting the same people sometimes so it's great to be in that ecosystem and in that network.

tech.eu: Thank you Wiktor and Airly!

tech.eu Interview: Wiktor Warchałowski, CEO and co-founder of Airly
Comments
Follow the developments in the technology world. What would you like us to deliver to you?
All

NEXT
5G Techritory Forum returns to Riga to bring collaboration around the future of communications to a new level
Editor’s note: This is a sponsored article,…
Andrii Degeler