Editor’s note: This is a sponsored article, which means it is independently written by our editorial team but financially supported by another organisation, in this case, Venturelab. If you would like to learn more about sponsored posts on tech.eu, read this and contact us if you are interested in partnering with us.

Last night in Zürich, the golden anniversary of TOP 100 Swiss Startups Award took place on stage and online, a first-ever hybrid event to celebrate the tech ecosystem in Switzerland. The tenth anniversary named three top startups: Cutiss in first place, Wingtra in second and Piavtia third. Each year the Venturelab event recognises 100 promising startups that are less than five years old, so some young companies can participate several times until they age out of the contest. A pool of 100 experts rank their personal top ten, those rankings are aggregated, and the ultimate cream of the crop come on stage to pitch their companies and receive their awards. Over the last ten years, the organisation has recognised a total of 435 startups, which have raised more than CHF 5.4 billion (just over €5 billion), with 47 exits and three IPOs. Those are impressive numbers considering TOP 100 Swiss Startups humble beginnings ten years ago. It has grown from its initial publication, the TOP 100 Startup magazine, to a yearly constellation of events and activities that culminate in the awards ceremony. The magazine is still an integral part of the initiative, though, coming hot off the press in four languages: German, French, English and Chinese. This year’s edition can be found here. 2020’s ceremony highlighted a milestone for the organisation and a very strange year. The challenges of the coronavirus pandemic were present not only through masks and social distancing, or the fact that many would-be attendees were watching the live stream from home (myself included) — but also through parallels drawn to other epidemics we’re facing. Speakers used the COVID context to stress issues of climate change, obesity, antibiotic resistance, and…liver disease (which apparently affects 25 percent of the population). Sustainability and biotech were big themes throughout the night. Indeed, the event opened with a keynote speech from the CEO of Climeworks (which just missed the top ten in the very first ranking ten years ago, coming in at 11th place). Christian Gebald used his platform to explain not just the climate crisis but the huge economic opportunity in fighting it, stating, "Carbon reduction is the new big oil."

The second keynote was from Madiha Derouazi, founder of AMAL Therapeutics, a Top 100 alum which had the largest biotech exit in Europe last year. 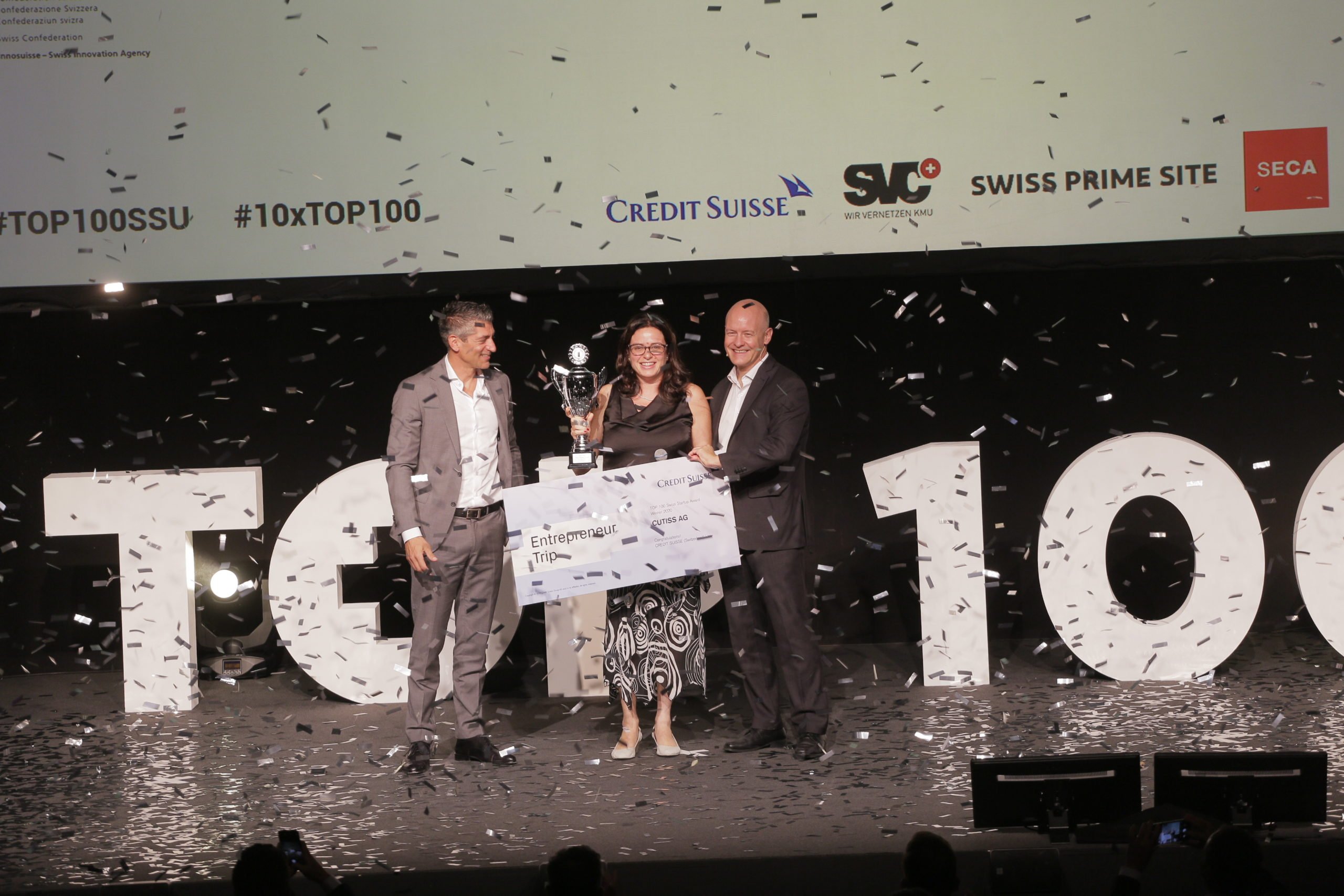 And now for the winners! This year’s top three startups, which feature three female founders, are as follows: First place: Cutiss, a life-science startup that bioengineers large quantities of customised human skin grafts for burn victims. The therapy minimises scarring that could otherwise be physically or socially debilitating. With a €20 million Series B raised in the last few months, the company wants to scale up with lab automation, making the new skin more affordable to patients. The Zurich-based startup was founded in 2016 by Dr. Daniela Marino (CEO) and Dr. Fabienne Hartmann-Fritsch (CCO) and ranked 6th in 2019.

Second place: Wingtra, a Zurich-based startup developing vertical take-off and landing (VTOL) mapping drones for surveying applications. Its drones are used in over 70 countries and industries such as mining, construction, research, agriculture, urban and spatial planning. Wingtra was founded in 2016 by Maximilian Boosfeld (CEO), Basil Weibel (CTO), and Elias Kleinmann (CFO). The startup ranked 4th in 2019.

Before the in-person audience was excused to socialise, wine and dine, the next TOP 100 Swiss Startup Award was announced, with hopes of safely bringing together founders, teams and investors in September 2021 — free of the coronavirus restrictions.

Biotech is big winner at the tenth anniversary of TOP 100 Swiss Startup Award
Comments
Follow the developments in the technology world. What would you like us to deliver to you?
All

NEXT
Curio raises $9 milllion in Series A funding for its curated audio platform
London-based Curio, which offers a subscription-based, curated audio content platform has…
Robin Wauters