Tech.eu Insights creates insight and guides strategies with its comprehensive content and reports. Browse popular Insights content.
Examine the effects of the latest technology with the Tech.eu lens, see the details and create powerful strategies. Take immediate action to access exclusive articles and reports.
Review Advantageous Packages
Does your company have Insights access? Check it
IoT
Sponsored by JETRO

Yosuke Kurihara, CEO of Uhuru UK: “To achieve sustainable society, data is key — and we need to deliver this data to the people”

Born and raised in Japan, Yosuke Kurihara went to college in the US. Afterwards, he got into creative marketing and helped the Japanese central and local governments spread information about innovative ideas and policies in the country. Fast-forward a few years, he joined Uhuru as a “conceptor,” that is, someone who generates creative ideas with tangible business value based on data, packages them into products together with a team of technologists, and delivers them to the customer.

Two years ago, Kurihara and Uhuru’s founder Takashi Sonoda decided to start “spreading our tech and ideas to the world.” To do that, the company opened an office in the UK, which became its first overseas headquarters. Since then, Kurihara has been spending most of his time in London working in the startup mode with a lean team, bringing big ideas to life.

Q: What is Uhuru then, and what kind of “tech and ideas” have you been spreading?

A: The company was founded in 2006, we have 250 people, mostly in Tokyo, and half of them are engineers — both hardware specialists and cloud integration professionals. Our shareholders are SoftBank, Salesforce, NEC (a major Japanese contractor company), NGK Spark Plug, Mitsui (one of the largest trading agencies in Japan), Toyoda Gosei, Murata, and more. So, we've got a few cloud players and institutions that provide sensors and edge computing solutions as shareholders.

Our vision is to basically sustain the world. Of course, 99 percent of the companies say that they care about sustainability — but we can actually be practical about that by utilising technology, especially the Internet of Things (IoT) and artificial intelligence (AI). To achieve sustainable society, I think data is key — and we need to deliver this data to the people and enterprises.

Our strength today is in cloud and edge computing. But 15 years ago, the company started as a cloud implementation provider. Back then, big Japanese organisations didn't like to put their own data on the cloud because they didn't trust it. At about the same time, however, Salesforce came to Japan and popularised the concept of putting organisational data onto cloud.

We were the very first implementation provider for Salesforce, so we really aligned with the strategy of Salesforce in Japan. And then, a couple of years later, we had a project with Mitsubishi Heavy Industry where we created a real-time monitoring system for their wind turbines in the US and Canada. That was our aha moment, when we realised that IoT is going to be big.

The challenge with IoT, however, is that you have to be careful about so many things. We're talking about networks, security of the data and data analytics, software, hardware, edge computing, cloud computing, but also the physical conditions, the temperature, the sensors… To solve that, we started our IoT orchestration service called Enebular, which makes it easier for our clients and ourselves to create trustable IoT products and utilise the data.

We don't create any hardware ourselves but collaborate with many partners; in fact, 60 percent of the sensor market is controlled by Japanese companies. So, we tie in all these edge computing and sensor manufacturers together and export the resulting solution to the global market. 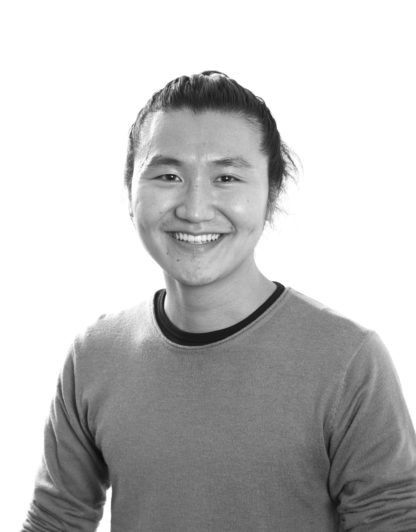 Q: Can you give an example of a project you've carried out?

A: There's a farming project where we’ve partnered with NGK Spark Plug. They're obviously a big player in spark plugs, but they also recognise that the manufacturing of combustion engines will be decreasing in the following years. They noticed that the gas sensor that sits along with their spark plug in the combustion engine, has a very good quality. They came to us asking whether we can come up with a project on a global scale where this high-quality gas sensor can be utilised.

After a few sessions, we'd found a use for this sensor in land shrimp farming operations. Currently there's one project running in Japan, with more upcoming ones in Africa and the Middle East where water supply is often limited. For these projects, you need to re-circulate the water and grow shrimps in a tank. Water quality monitoring is very important here. With an automated solution and good sensors, farmers can reduce the costs and increase the yield of shrimps.

We're also working on salmon farming. Salmon is key for human beings as a source of protein, it is essential to sustain our food chain. That's what we care about, so we jumped into this field and we're already collaborating with a hardware maker in Scotland and several other EU players. What we are going to do here is build an edge computing system at a farm in Scotland, and then aggregate the data, visualise it, and analyse it using an AI algorithm, which will tell us the right amount of feed. As a result, the cost of aquaculture will be reduced tremendously.

Q: Why did you actually choose the UK of all European countries?

A: We have four major reasons. One is partnerships: we have a collaboration with Arm and we see it as a key player in edge computing. Also, the Scottish government has approached us, and they're very eager to apply our technology in local industries.

Another reason is the project opportunities. The UK has been working a lot on onshore windmill turbines; also, a lot of innovation here is happening in the food supply chain and in smart cities. The UK is certainly ahead of Japan and many other countries in working on the UN Sustainable Development Goals (SDG).

The third reason is talent. The UK has good higher education and a lot of young talent are coming from its colleges. The UK has great fundamentals when it comes to edge computing, and I think it's backed by Cambridge University and other higher educational institutions.

Last but not least, we're aiming for an IPO on a global scale. It's easier for us to touch upon our strategic investors and also governmental financial support dedicated to make SDG-related projects happen in the EU.

Q: And how many people do you have in the UK?

A: At the moment three, including myself, but we have a projection of hiring 10 more in the next five years. We're looking for engineers and salespeople.

Q: You have an interesting background: you've lived in Japan, in the States, and now in the UK. What do you think of the UK ecosystem?

A: I actually found a lot of similarities between Japan and the UK. I think one of the reasons is that both countries are based on islands. The geological similarity brings a lot of common stuff like understanding of people, how they live, how they grow the culture, and how they build up the society. Also, if Japan is the Far East, then the UK is the Far West — it's like the sandwich of the globe.

Now that the UK is leaving the EU, from our perspective as a small venture business, we can say it is definitely a chance for us. Many big enterprises are leaving the UK to settle in the EU — that means there definitely will be a space for small players including ourselves. That's one of the reasons why Japan is about to sign a free trade agreement (FTA) with the UK.

Q: Let's get back to Uhuru. On one hand, there's the mothership in Japan that's been around since 2006; on the other hand, you're based in the UK with three people. Does it feel like building a startup?

A: Thanks for asking that. I really think of myself as the CEO of a new startup, that's fundamental for me. We are new to the market, new to the people, and I'm confident that we can deliver good solutions and tech in the UK. I'm talking first of all about farming and food supply chains.

Q: Is there a lot of local competition in these sectors?

A: There are many other companies, but in IoT, collaboration is key. That's why I don't address even our direct rivals as competitors. In IoT, you're talking about thousands of standards working together, thousands of computers talking to each other in different languages. It's like a Star Wars world of an ecosystem. If you see your competitors as enemies or opponents, the project won't work. Even if we develop the same kind of product, there are always ways to work together with our peers.

Q: What's the broad-scale impact that Uhuru looks to make?

A: Like I mentioned, we have a lot of IoT implementation projects going on, but the second step that we are approaching now, with our CTO in Japan, is the trusted data.

In the next phase of IoT, two things will be key — one is security and the other is trustability. Those are two different things in terms of how you deal with the data. Security is about protecting the data, so that it won't be hacked by third parties. But trustability is about how you trust each other to use the same data in the same ecosystem. It's all about how to share data safely and practically.

We take the trustability approach to create a data trading ecosystem. We're working on a specification of what we call trusted devices. Edge devices and sensors will be the key in delivering a trusted data ecosystem, as they are the source of the data. So, it’s important that you can trust the device, because then you can trust the data that's coming from it.

What we do is we document the manufacturing process of a sensor or any other edge computing device and record that to the distributed ledger such as blockchain, so that everybody in the trusted data ecosystem can see the DNA of the “mother” of the data. That's our concept.

We are aiming to deliver this trusted device network to the ecosystem in the next two to three years. This sort of combination of security and trustability will be the key for us to make our business big.

Yosuke Kurihara, CEO of Uhuru UK: “To achieve sustainable society, data is key — and we need to deliver this data to the people”
Comments
Follow the developments in the technology world. What would you like us to deliver to you?
All