When SellerX announced its €100 million seed round last month, it certainly turned some heads. While the investment was mostly in debt, the large figure still spoke to a ripening trend in e-commerce.

SellerX, based in Berlin, buys up businesses selling on Amazon, supports their expansion and revamps their brand. The startup was only founded this summer.

The hefty investment was led by firms including Cherry Ventures and Felix Capital with e-commerce veterans like Zalando co-founder David Schneider and the former chief executive of Amazon UK Chris North chucking cash into the round.

E-commerce has seen a notable spike in 2020. As Covid-19 lockdowns forced shops to pull their shutters and left high streets deserted, online shopping has accelerated enormously.

Amazon said that the Thanksgiving and Black Friday shopping season this year was its biggest yet as people go online to buy their gifts with Christmas approaching.

SellerX joins a burgeoning field of startups pursuing fulfilment by Amazon (FBA) businesses, which sell on the e-commerce giant’s platform but use Amazon’s infrastructure to store, dispatch and deliver the goods.

Earlier this year, Thrasio, a US company also in the business of buying FBA sellers, raised a round that valued the company at $1 billion and the company said it was profitable.

For SellerX’s founders, entering this new field happened by chance in some regards. Philipp Triebel and Malte Horeyseck both returned to Germany when the coronavirus pandemic hit.

The two decided to combine their expertise: Triebel, formerly of Goldman Sachs in its special situations investing group, and Horeyseck, who brought an e-commerce background from his time in Brazil with online retailer Dafiti.

“We found ourselves flexible and free enough to start a new project and we thought we were the perfect fit to found SellerX because I'm bringing the e-commerce expertise,” Horeyseck said. “Philipp, with a very strong finance and investment background, is leading the acquisition side.”

Triebel said that the duo started looking into the e-commerce space as it was one of the few sectors that has been shielded from coronavirus upheaval.

“Clearly there's a couple of sectors that benefitted or got an extra tailwind through corona,” Triebel said. “It is exciting to be in a sector that has a lot of tailwinds. E-commerce is growing, Amazon is growing, the marketplace business within Amazon is growing.”

As e-commerce takes on an even greater market share, there was an opportunity to get some skin in the game, help merchants scale their online businesses and ultimately create a portfolio of brands. 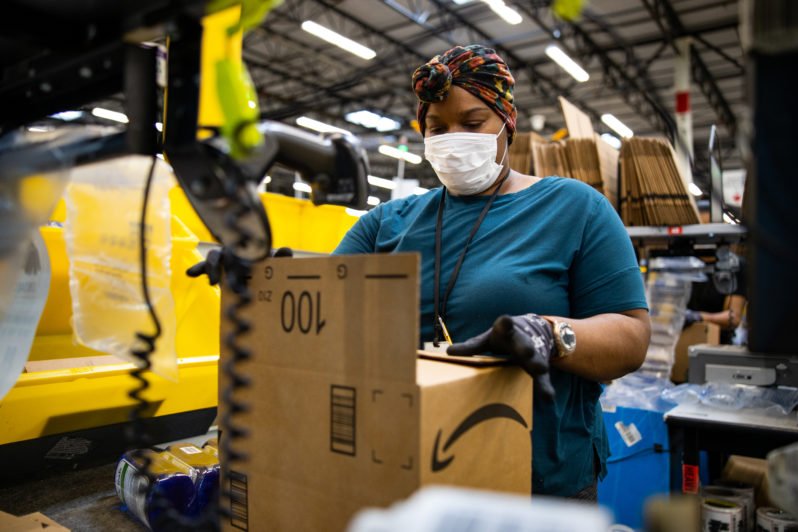 “We're combining two trends. One is obviously the Amazon seller consolidation. The second one, what we really want to do, is build consumer brands,” Horeyseck said. “It's not only the financial optimisation, but we also picked sellers that have the potential to become a real direct-to-consumer brand.”

SellerX acquired its first FBA seller at the end of summer, a store selling arts supplies. This is a typical example of the kinds of stores that SellerX is targeting, Horeyseck said. Items that are easy to move and generally need to be replenished regularly, meaning returning customers.

Products like household goods, pet supplies, gardening supplies – where a brand story can be built around them – are also on the radar.

“We need to make sure that this thing is going to be around in the future so we look at evergreen products and categories with products that have long product lifecycles,” Horeyseck said.

There needs to be one or two years of consistent performance with good customer reviews, he added on what SellerX looks for in a seller.

“Obviously if you look at the algorithm that optimises any e-commerce catalogue, there's short term and long term things in there,” he explained.

“The short terms are click-through rate and conversion rate because a platform wants to sell and wants to be most efficient. But then you also want to have a sustainable approach. You don't want to have high return rates and you also don't want to support products that are of low quality.”

One area that will present challenges is fashion. As seasons and trends change, stock needs to change rapidly, which means much higher operational costs compared to kitchenware, garden supplies and fast-moving consumer goods.

“Then there are certain hyper trends. Maybe dream catchers are in for a few months, and then no one wants dream catchers anymore. You need to be careful about that as well,” Horeyseck said.

Triebel told tech.eu that the funds raised from the seed round will be mainly used for acquisitions and he expects SellerX will acquire between 30 and 40 businesses over the next 18 months.

“We will be at a revenue run rate of €20 million by the end of year,” Triebel said.

Hot on its heels are other European players, Razor Group, which is raised €25 million recently, and Heroes, another recently founded outfit that has raised $65 million. Thrasio has also committed $225 million alone to acquiring German sellers.

It begs a question around the long-term viability of the business models as more companies enter the field. By building a business that relies on Amazon and the tech giant maintaining relationships with its sellers, can this leave the likes of SellerX vulnerable?

Horeyseck is quick to shake off this concern.

“Obviously there's a very high dependency in our business model to Amazon. We're buying Amazon FBA businesses but we believe that if you think about what Amazon wants, Amazon wants customers and they're happy if they get a great product at the best price and a good experience on the way,” Horeyseck said.

“It's going to be more competitive because we want to grow the assets. I think that's also good for Amazon.”

SellerX is betting big on building a portfolio of Amazon brands - here's why it raised €100 million in funding
Comments
Follow the developments in the technology world. What would you like us to deliver to you?
All