Here be unicorns: These are 27 billion-dollar startups minted in Europe in Q1’2021

The European startup ecosystem has been showing great growth numbers over the past year, which was well documented by ourselves and other organisations that keep track of the numbers. In the first quarter of this year, however, we also noticed a significant number of startups entering the unicorn territory — a metric that may be showing the maturity of the ecosystem.

With that in mind, we dove into our database to capture all the funding deals — as well as IPOs and M&A — that minted new European unicorns in the first three months of 2021. To make things easier, we counted all startups whose valuation surpassed one billion US dollars, euros, or pounds — and found 27 of them!

In terms of unicorns per country, Israel came first with eight entries, featuring a slew of security and cloud startups. The UK and Germany had five new unicorns each, followed by the Netherlands and Sweden with two new billion-dollar startups per country. Austria, Denmark, France, Switzerland, and Turkey each supplied one freshly minted European unicorn to the market. If we were to adopt a more conservative definition of Europe — that is, not counting Israel and Turkey, — we'd be looking at 18 new unicorns. 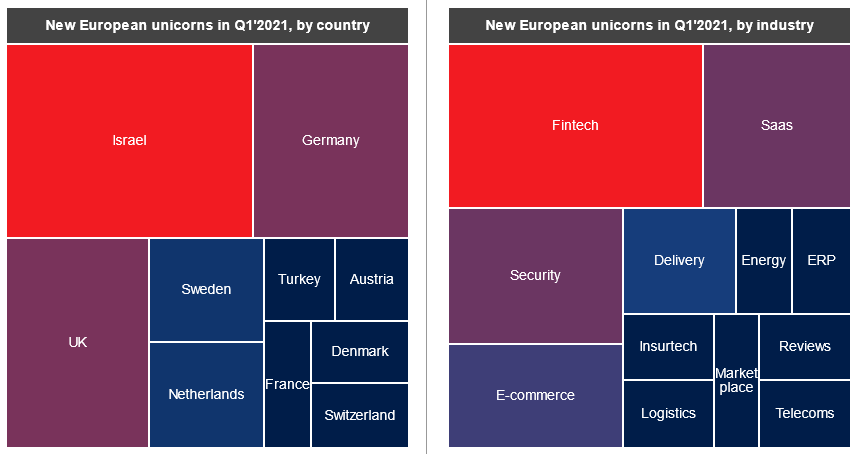 Industry-wise, the list is a reminder that fintech is a booming industry that’s going through rapid transformation while a lot of money is being poured into companies disrupting it. Cybersecurity, e-commerce, and SaaS just seem to be the evergreen industries that always attract talent and funding, while grocery delivery is notably heating up.

Now, without further ado, here are the 27 unicorns that came into this world in the first quarter of the year 2021, together with their valuations at the time of writing. The list is in alphabetical order.

The cloud security startup based in Tel Aviv landed a $135 million Series E round led by ION Crossover Partners in March. The company has raised a total of $265 million and said that the year 2020 spurred it to carry the latest round earlier than planned “due to Covid-19 accelerating widespread transition to the cloud.”

The cyber security company attracted $100 million in May from the US-based growth equity firm Stripes with participation from existing backers. Per Calcalist’s report, “Axonius' platform can be deployed in minutes, giving customers a reliable and comprehensive picture of their assets and devices, discovering information security gaps, and automatically validating and enforcing the organization's information security policies.”

The Vienna, Austria-based fintech scale-up, which provides a brokering/exchange platform for trading digital assets such as cryptocurrencies and precious metals, closed a Series B round of $170 million, thus becoming Austria’s first unicorn. Early investor Valar Ventures, co-founded by Peter Thiel and a prolific investor in European fintech companies, led the round. Partner of investment firm DST Global also chipped in, but it’s unclear who else participated in this round.

The online wall art retailer went public on Nasdaq First North Growth Market in February and was valued above the initially set market cap of about €1.07 billion. The startup, which has been profitable since 2015, “offers its customers a unique and curated assortment of over 6,000 designs as well as frames and accessories in 35 countries via 20 local websites.”

The telecommunications startup announced a $208 million Series B round in January from D1 Capital Partners, with participation from existing backers Bessemer Venture Partners and Pitango, as well as a new one, Atreides Management. Founded in 2015, the company has built Network Cloud, a software product  for the telecom industry that “turns the physical network into a shared resource supporting multiple services.”

The Amsterdam-based public company that’s been developing fast charging infrastructure for electric vehicles across Europe since 2012 raised €150 million though an accelerated bookbuild offering in February. At approximately the same time the company sailed past the €1 billion market capitalisation mark.

The fast-growing 10-minute grocery delivery startup raised a $300 million Series C round in late March. Founded in Turkey in 2015, the company “launched in London in January 2021 and is set to expand its operations to Germany, France and the Netherlands in the upcoming months,” Getir said in a press release.

Berlin-based ultra fast delivery service Gorillas raised $290 million in late March and became Europe’s fastest unicorn to date. The round was led by Coatue Management, DST Global, and Tencent. In just over 10 months, Gorillas has expanded to more than 12 cities including Amsterdam, London, and Munich and counted more than 40 micro fulfilment centres at the time the funding was announced.

The Stockholm-based company, which focuses on front-office trade order and execution management systems and serves 24 of the 25 top investment banks, was acquired in late March by Broadridge. Per Finextra’s report, “the firm generated recurring revenues of approximately €210 million in calendar year 2020.”

The London-based digital lender founded in 2014 had reportedly surpassed the unicorn valuation following a secondary sale. The company, which hasn’t been talking to the media almost at all, has only raised £4 million in equity funding to date.

The Berlin-based fintech startup landed €110 million in funding in January from TCV, which also backed Facebook and Netflix, as well as Tiger Global and Arena Holdings. Mambu sells its software products to banks that want to develop their own digital banking platforms. Among its clients are Santander and ABN Amro, as well as fintech firms N26 and OakNorth.

The B2B payments startup landed $110 million in funding from Coatue and others in January. Founded in 2018, Melio provides small businesses with a way to digitally manage their supplier payments.

The online greeting card retailer was acquired by Photobox back in 2011 for £120 million, but has been operating separately from the mothership since 2019. The company went public in London in February to see its shares soar 25 percent, giving it a valuation north of £1 billion.

The online luxury retailer was valued well above the unicorn threshold in its New York IPO in January. The company is based in Munich and has a complicated history: it used to be part of bankrupt US retailer Neiman Marcus, which acquired it in 2014 for $200 million, but had been transferred out of the reach of Neiman’s creditors after the department store chain went under.

The Swiss enterprise software firm founded 17 years ago landed a Series D round of $180 million in February. Permira led the round through its Growth Opportunities Fund I, with prior backers such as Highland Europe and Index Ventures participating.

The US-Israeli company that develops an automatic cloud backup platform for Salesforce software raised $167.5 million in late January, becoming the third unicorn minted in the country within a week. The round was co-led by Insight Partners, Salesforce Ventures, and Sapphire Ventures, with participation from existing investors Innovation Endeavors, Vertex Ventures, and Oryzn Capital.

The cloud-based payroll and hiring platform picked up $100 million in early March from Greenoaks Capital Partners, with “significant participation” from IVP and Alkeon Capital. The startup has developed an AI-based platform that “automates a lot of work and removes much of the manual activity that comes out of trying to right-size a lot of legacy payroll products to work in new paradigms.”

The all-in-one HR platform for SMBs raised a $125 million Series D in January. The round was led by Index Ventures, with participation from Accel, Lightspeed Venture Partners, Northzone, Global Founders Capital, and Picus.

Localised payment provider PPRO raised $180 million in January at a unicorn valuation from Eurazeo Growth, Sprints Capital, Wellington Management, and other investors. The company has created infrastructure that allows marketplaces, payment systems, and other fintech players to accept payments through channels used in any given geography.

Berlin-based digital freight forwarder Sennder secured $160 million in growth funding in January to “accelerate digitalization of European trucking” and boost its expansion plans. All of its prior investors participated in the round, but it was a group of new investors that led it. To date, the company has raised more than $260 million from Accel, Lakestar, HV Capital, Project A and Scania.

The digital bank raised a Series D round totalling a healthy £272 million, its largest ever. Led by Fidelity Management and Research the round was oversubscribed by £72 million at a £1.1 billion pre-money valuation. The bank had reported its fourth consecutive profitable month, which would put it on track to report its first full year of only black on the books.

The consumer reviews giant gained a unicorn valuation after its IPO on the London Stock Exchange in late March. The company had raised £473 million through the listing. Trustpilot’s previous investors include Draper Esprit, Index Ventures, Northzone, and Seed Capital.

The Dutch “people-centric” ERP firm was acquired in March by private equity firm TA Associates. The exact number of the deal was not provided, with TA Associates commenting, “a transactional values in excess of $2 billion.” Partners Group also participated in the buyout from former majority stakeholder Advent International.

The Paris-based marketplace for pre-owned luxury fashion products landed €178 million in funding in March. The round was backed by the global French luxury group Kering, and US investment firm Tiger Global Management.

Another rapidly growing European startup, Wiz raised $130 million in March, shortly after its previous $100-million round. The company has put together a cloud infrastructure security platform “that finds the most critical risks and infiltration vectors with complete coverage across the full stack of multi-cloud environments.”

London-based insurtech Zego raised $150 million in March to join the unicorn club. The Series-C funding round was led by DST Global and included participation from new investor General Catalyst, as well as all of Zego’s existing investors including TransferWise founder, Taavet Hinrikus, Target Global, Balderton Capital and Latitude. Zego is a commercial motor insurance company that provides opportunities for businesses; everything from self-employed drivers and riders to entire fleets of vehicles.

Here be unicorns: These are 27 billion-dollar startups minted in Europe in Q1’2021
Comments
Follow the developments in the technology world. What would you like us to deliver to you?
All