Here's the bad news: there's new research that investigates the role gender plays in a startup founder's ability to raise private capital in Europe, and it turns out that if you're a woman, your chances of raising cash are extremely low.

The good news is ... actually there is no good news, it's all pretty terrible.

NGP Capital, the Finland-born global VC firm, is today releasing a new depressing report on the abysmal state of gender parity in the European tech startup and investment community.

What the investment firm did was dive into data gleaned from Q, NGP Capital’s custom-built AI platform for startup and market discovery, to look at the raw numbers. All in all, NGP Capital selected an initial 21,289 companies, and then looked at 9,422 companies that raised venture capital from 2014 and 2019 to see how many of their founders were women.

NGP Capital teamed up with Catarina Cawén, a young researcher in Helsinki, to study the correlation between the gender of entrepreneurs and the probability that they will raise venture capital in Europe.

The results of the research are as unsurprising as they are frustrating (if you care about inclusion and diversity): 93% of the €3.2 billion of VC invested in the Nordic countries in 2019 went to male-only founding teams, 6% to mixed-gender teams, and only 1% to founding teams made up entirely of women.

These are statistics we've seen and lamented about before, but it's also important to note that - particularly 'thanks' to the coronavirus pandemic - the numbers are not getting any better. In fact, they're getting worse (NGP Capital will likely update the research in the coming months to include 2020, but don't hold your breath on progress).

So let's talk about the perceived 'supply issue' often brought up by critics. Women do tend to start fewer companies than men. But look at the chart below.

It shows the total number of European companies started between 2014 and 2018, and how many of them were allocated venture capital between 2015 and 2019, both in absolute terms and as a relative percentage within each founding team type.

What the research also offers, to my knowledge for the first time, was insights on other areas such as the differences in European venture capital distribution by gender among industries, and the differences based on founder background factors, such as whether the entrepreneur had founded a company before or had a university degree.

The chart below shows how VC financing has been distributed across different industries among the different types of founding teams. The percentages show the share of companies that raised VC funding, compared to the number of companies founded. 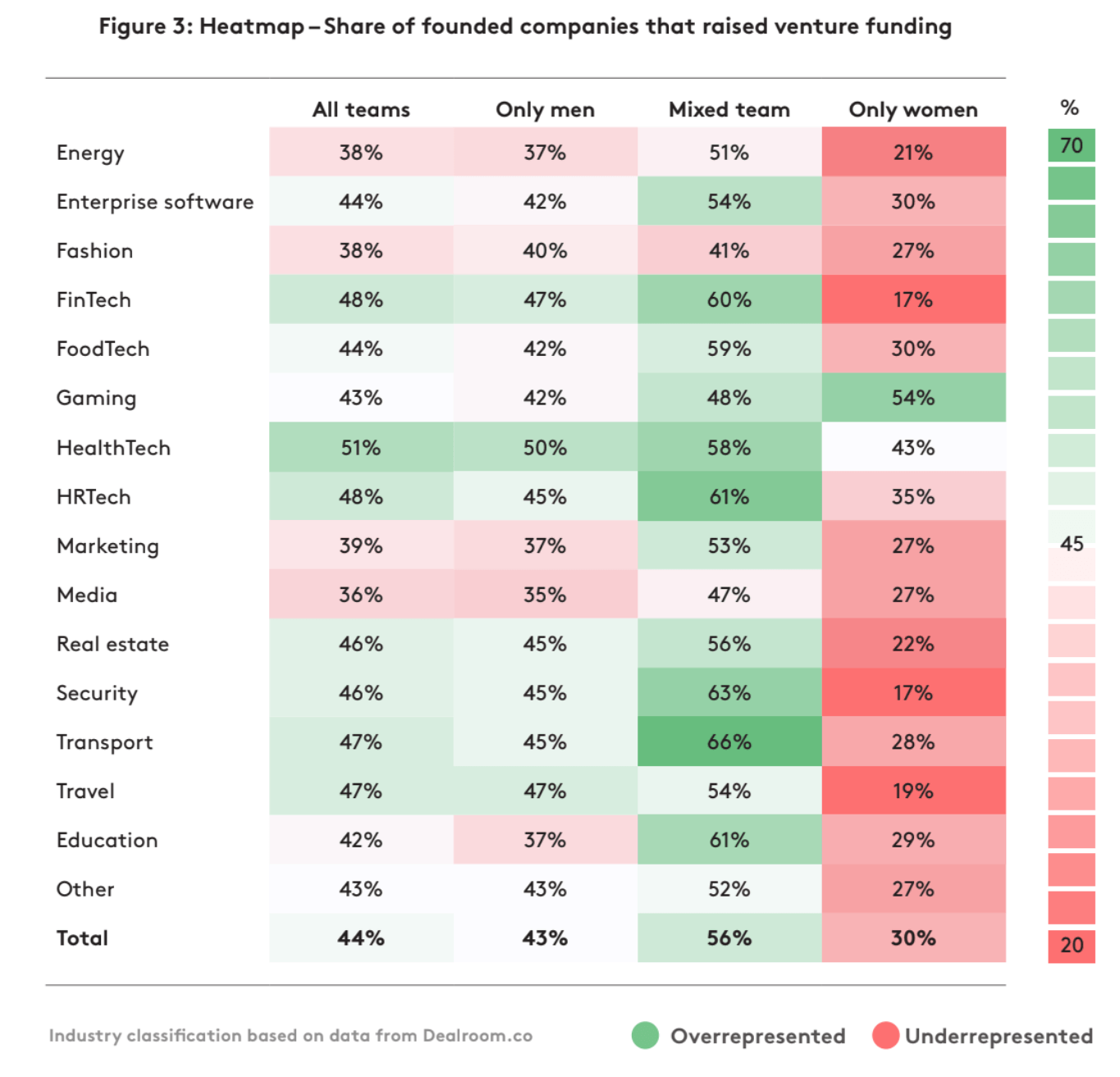 In Europe, the most companies were started in the fintech, healthtech, foodtech, enterprise software/SaaS, and marketing industries between 2014 and 2018.

The teams with only male entrepreneurs as well as those with mixed teams started more companies in the fintech (3,102) and healthtech (2,523) industries compared to other industries.

All-women teams received the lowest number of financing rounds in the fintech, security and travel sectors.

One key finding shown of the research is that mixed-gender teams raised the most capital in all industries except the gaming sector, which was the only sector where female-only teams were funded more often than male-only or mixed founding teams. 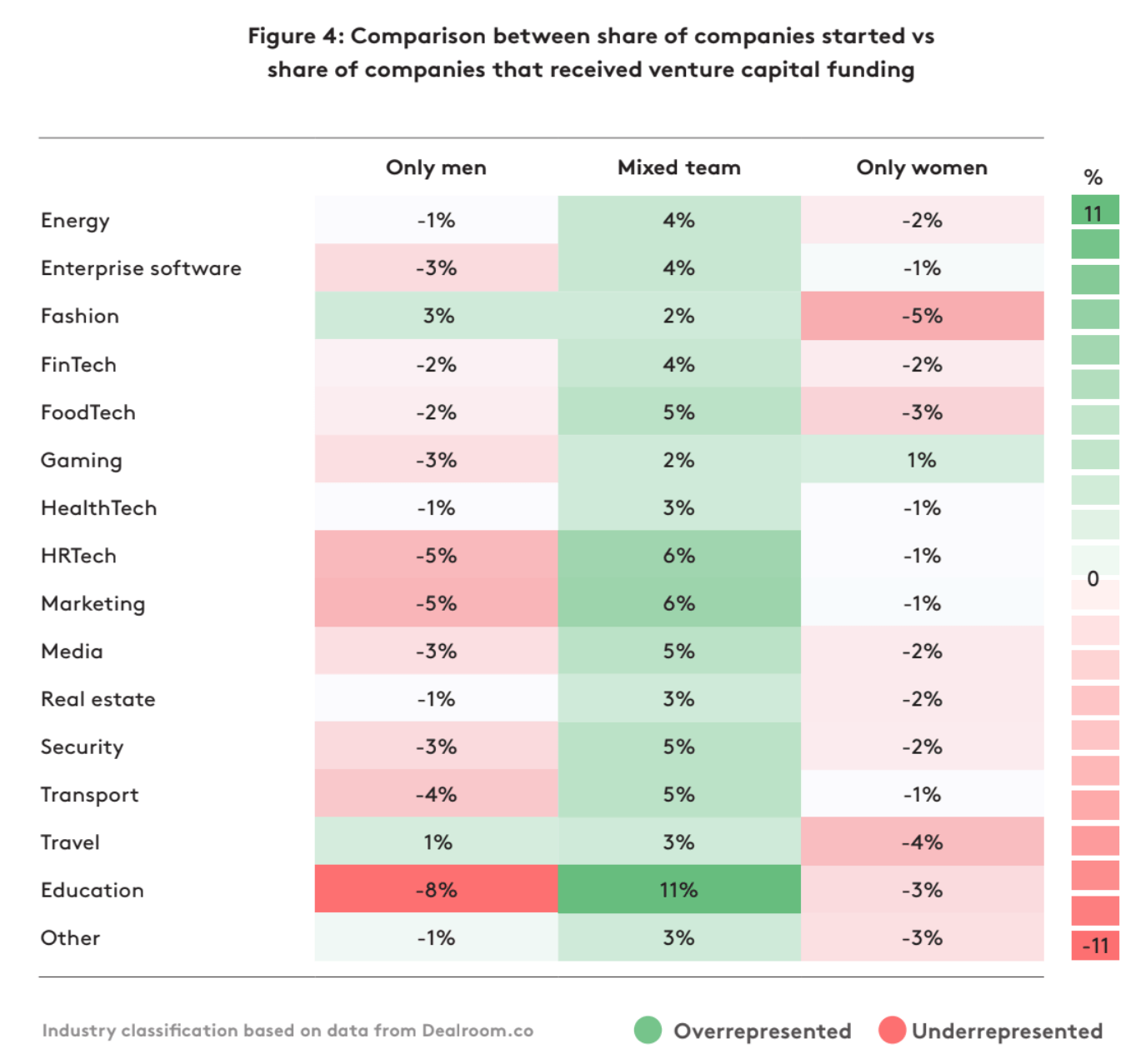 Background factors also affect the ability to raise VC, but gender seems to play an outsized role, as you can see in the chart below. It shows how venture capital is distributed based on background factors such as whether the entrepreneurs have founded a company before, have a background in economics or in technology, or have a university degree. 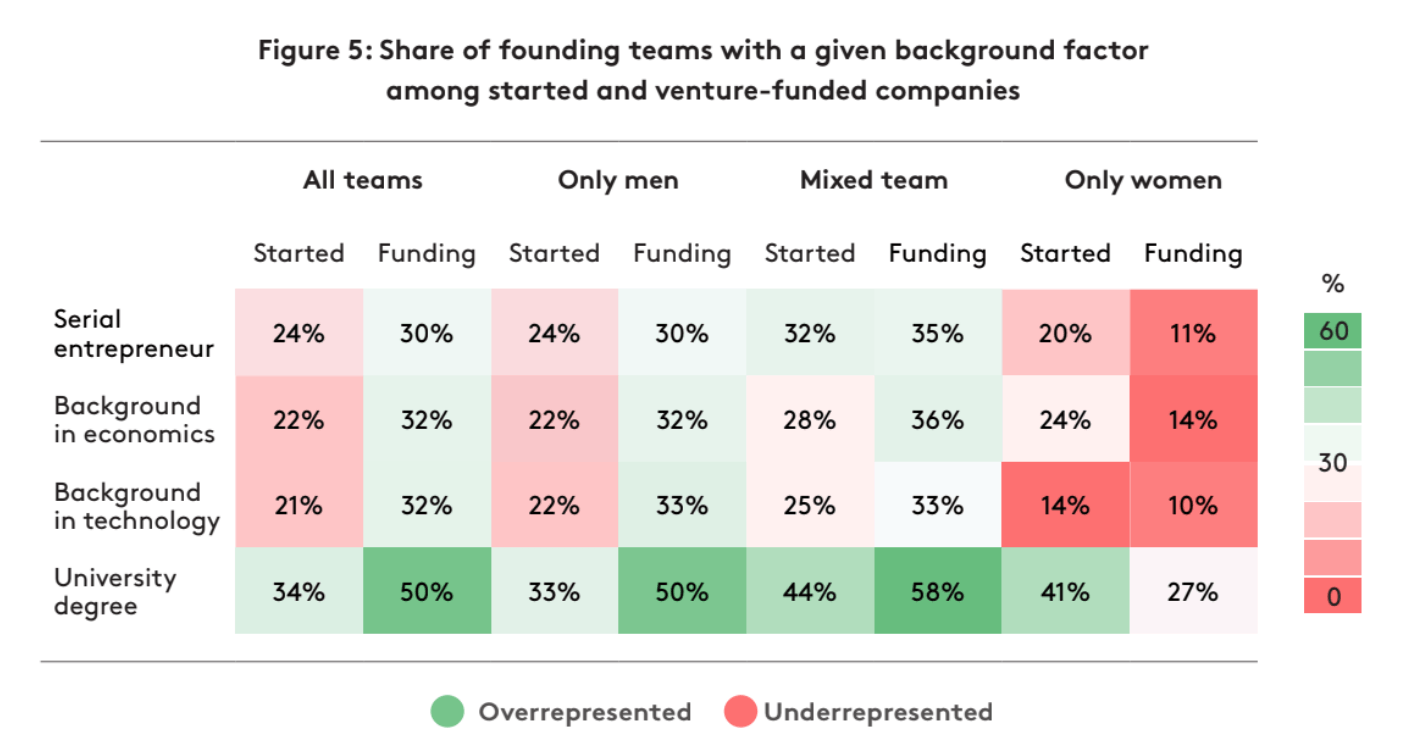 However, the chart also shows that the gender of the founding teams plays an even more important role. 50% or more of both male-only and mixed-gender teams who received VC financing had university degrees. In contrast, less than 30% of female entrepreneurs who were granted venture capital had degrees.

I'll leave you with this: according to this research, based on a regression model, among all founders and all other factors being equal, being of the female gender alone reduced the probability of a founder being allocated venture capital by 17%.

Let that sink in. Of all the things that I think need fixing in the European startup and venture community, this one should be front and centre. Change my mind.

Last week, we recorded an interview with NGP Capital's Annika Sjöberg and Bo Ilsoe, and we'll run it asap to keep the conversation about this going - subscribe to our podcast to stay updated.

New research confirms: if you're a female startup founder, fat chance raising venture funding in Europe
Comments
Follow the developments in the technology world. What would you like us to deliver to you?
All