By now, many have heard about Cannabidiol, better known as CBD, the non-psychoactive cannabinoid derived from the cannabis plant and discovered in 1940. You can find it in products ranging from edible gummy bears to skin oil, for purposes such as pain or anxiety relief, cognition, acne treatment or sleep aid. The FDA-approved prescription medicine Epidiolex containing CBD is currently being used by over 1 million people with hard-to-treat epilepsies. Scientific publications are multiplying – exploring many more therapeutic applications for conditions such as diabetes and arthritis – and finally providing clinical proof to some of the effects that have been observed for years.

Investment in cannabis startups has been on fire, both by number of deals and amounts raised, and 2021 is surpassing 2020 by a long shot, with over 200 deals by mid-October, including massive rounds like Dutchie’s $350 million Series D and Jane Technologies’s $100 million Series C. 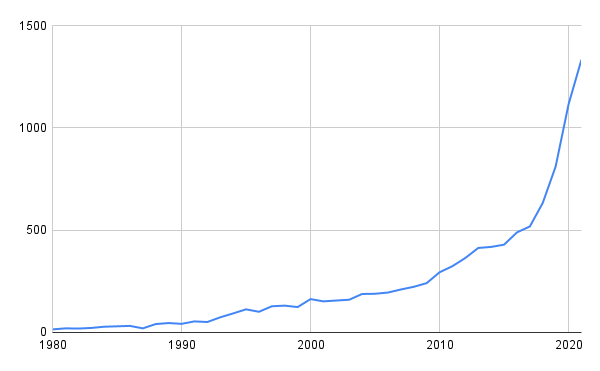 In other words, we’re entering the golden age of CBD, which might turn out to be a discovery as important as aspirin. So why isn’t this ‘hero ingredient’ even more widespread?

There are several reasons: first, it’s slow and expensive to produce and extract from cannabis plants, second, it is hard to control its dosage: a 2020 FDA study found that more than half of consumer CBD products differed greatly from what was written on the label. I should know: I’m from Canada, a country now famous for its cannabis farming, home to 8 of the top 10 largest cannabis companies by revenue, while the Canadian stock exchange hosts the 2 leading US firms, Green Thumb Industries and Curaleaf.

Using biomanufacturing to produce high-value key ingredients emerged with the production of insulin invented in 1978 by Genentech, and has now spread to all kinds of compounds -- from the heme of Impossible Foods to Perfect Day’s milk proteins or Geltor’s collagen.

Today, companies like my firm Hyasynth Bio, Creo and Willow Bio are using synthetic biology tools to produce cannabinoids like CBD and CBG (Cannabigerol) through precision fermentation. The advantage of this method is that it provides high quality products without the use of pesticides and other chemicals, while reducing time, costs and resources (fermentation uses 89% less land and 95% less water).

So if the technology is ready and regulations are favorable, why isn’t it already done? One key reason is that the production requires particular biomanufacturing facilities, and they are not evenly distributed around the world. In fact, when I researched the biomanufacturing infrastructure, I found a surprising answer: Europe - not North America nor Asia - had the most advanced infrastructure.

Europe has been a pioneer in pharmaceutical, chemical and food industries. Among others, German chemists Haber and Bosch designed the process to create synthetic fertilizers, which helped feed the world for the past century, while the Swiss Albert Hofman first synthesized LSD in 1938 which became his ‘problem child’.

Today, Europe is a global leader in industrial biology and a manufacturing base for global biotech companies such as Sanofi, BioNTech (of Covid vaccine fame) and Chr Hansen, which as of 2017 operated the world's largest fermentation facility in Denmark. Continued investments by the EU aim to further develop biomanufacturing, with initiatives such as the Biobased Industries Consortium (BIC), a joint undertaking between the EU and industry, which contributed over €3.7 billion between 2013 and 2020.

On the regulatory front, the European Court of Justice recently clarified that CBD wasn’t a narcotic under European law, and the European Commission designated CBD as a novel food in 2019. As a result, Europe looks increasingly like the perfect place to ‘own’ bio-manufactured CBD for the global supply chain.

Investors are taking notice, ranging from dedicated early stage funds to larger VCs. Among investors, Casa Verde Capital (founded by Snoop Dogg, investors in Portugal’s medical cannabis firm AceCann), btov Partners (based in Europe, backers of Germany’s Demecan), Enexis AB (based in Sweden), Atlantic Food Labs (backers of Sanity Group, which raised the largest EU cannabis round to date with a $44.2M Series A), Leafy Tunnel (based in the UK), Key Investment Partners (in Denver, Colorado), SOSV’s IndieBio (one of our early investors), SK Capital Partners, Btomorrow Ventures (which led the C$31M series A in Canada-based Trait), FastForward Innovations (which backed Germany’s medical cannabis company Eurox Group), and many others have already jumped on board.

Acquisitions have also started to take place, GW Pharma (acquired by Jazz Pharmaceuticals), EMMAC Life Sciences (acquired by Curaleaf) and Iuvo Therapeutics (acquired by Wundr Co.). Many large pharma companies are keen on using their strong balance sheets to jump on the bandwagon once winners emerge.

For now, the industry got its headstart with traditional cannabis farming, and one can only guess if the biomanufacturing approach lives alongside it or overtakes it. We believe that, just like insulin and the emerging food-grade precision fermentation industry, this is an application in which biomanufacturing can shine, especially with the rising concerns about the use of natural resources like land, water and energy.

In conclusion, and while were are still in the first inning, there is a clear window of opportunity for investors, startups and biomanufacturers. Time will tell if it turns into a homerun for Europe!

How CBD biomanufacturing could make Europe change and win the cannabis game
Comments
Follow the developments in the technology world. What would you like us to deliver to you?
All

NEXT
Disrupting 3D design process, Gravity Sketch swipes off $33 million
While we think and live in a 3D world, everything we interact with — from cars and shoes, to…
Megha Paul