The Belgian tech ecosystem has seen some healthy growth over the past four years. Ahead of our first Tech.eu Summit in Brussels in May, we dig into the data on Belgium's most successful startups, top verticals and most active investors.
Jill Petzinger 27 April 2022
1
Share
Facebook Twitter Linkedin

Since our first Tech.eu Summit in Brussels is happening on 17 May, we charted the Belgian tech scene from 2018 until today, together with our partner BeTech, the Belgian Tech initiative.

Overall, Belgium has a small but dynamic tech scene, and the past four years have seen rapid growth across the board, with 200-plus Belgian startups and scale-ups netting over €2.7 billion in investment between 2018 and the end of 2021. Four of those tech companies raised more than €100 million each, and 280 investors got involved in deals.

A country of only 11.5 million inhabitants, Belgium is diverse in terms of culture and languages, and its tech ecosystem is not just concentrated in the capital, but spread out across different cities and towns. In terms of verticals, Belgium excels in bio tech and health tech, followed by analytics, software, and fintech, with a focus on B2B.

Without further ado, let's jump into the charts to see what the Tech.eu database revealed about Belgium’s top companies and investors, and how the scene is faring in the first quarter of 2022. 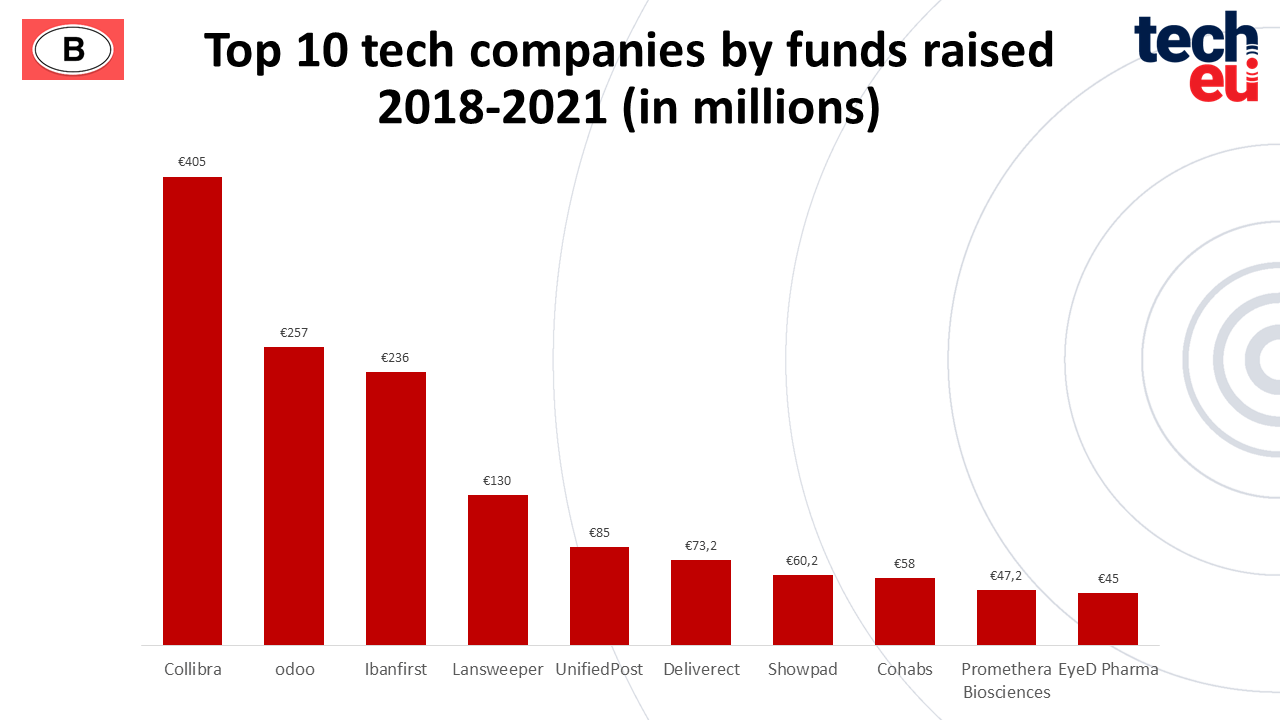 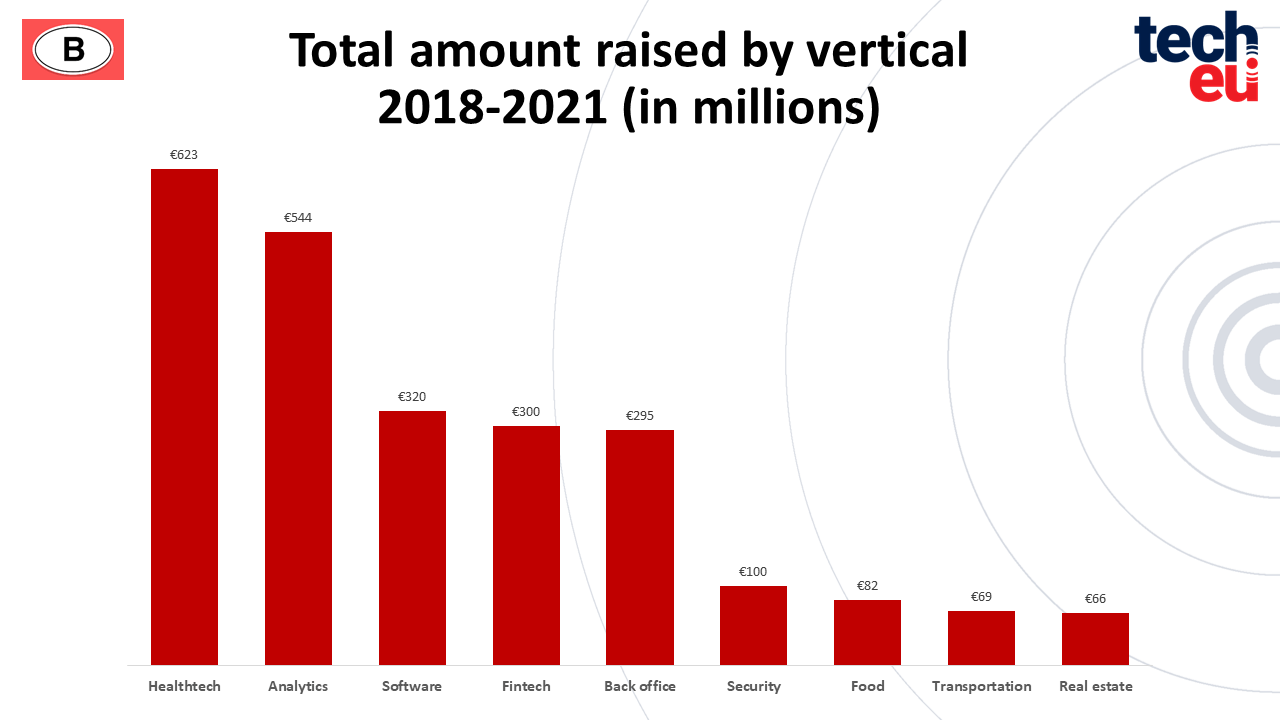 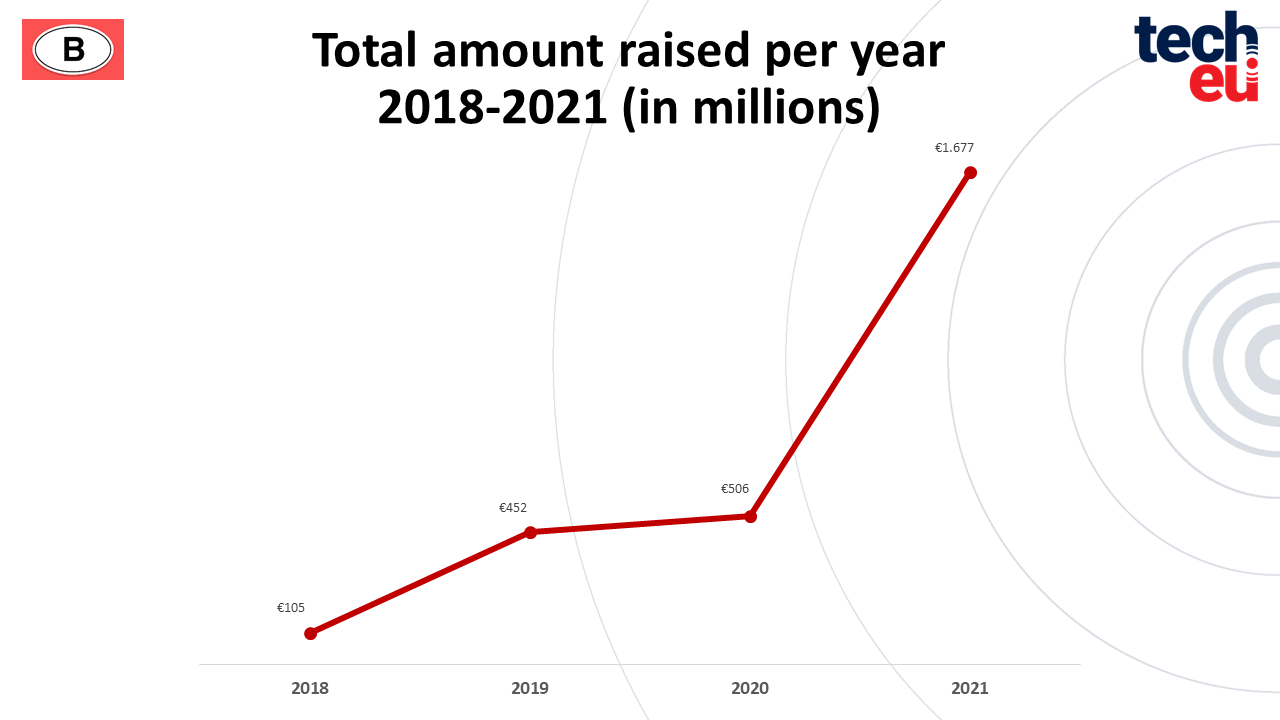 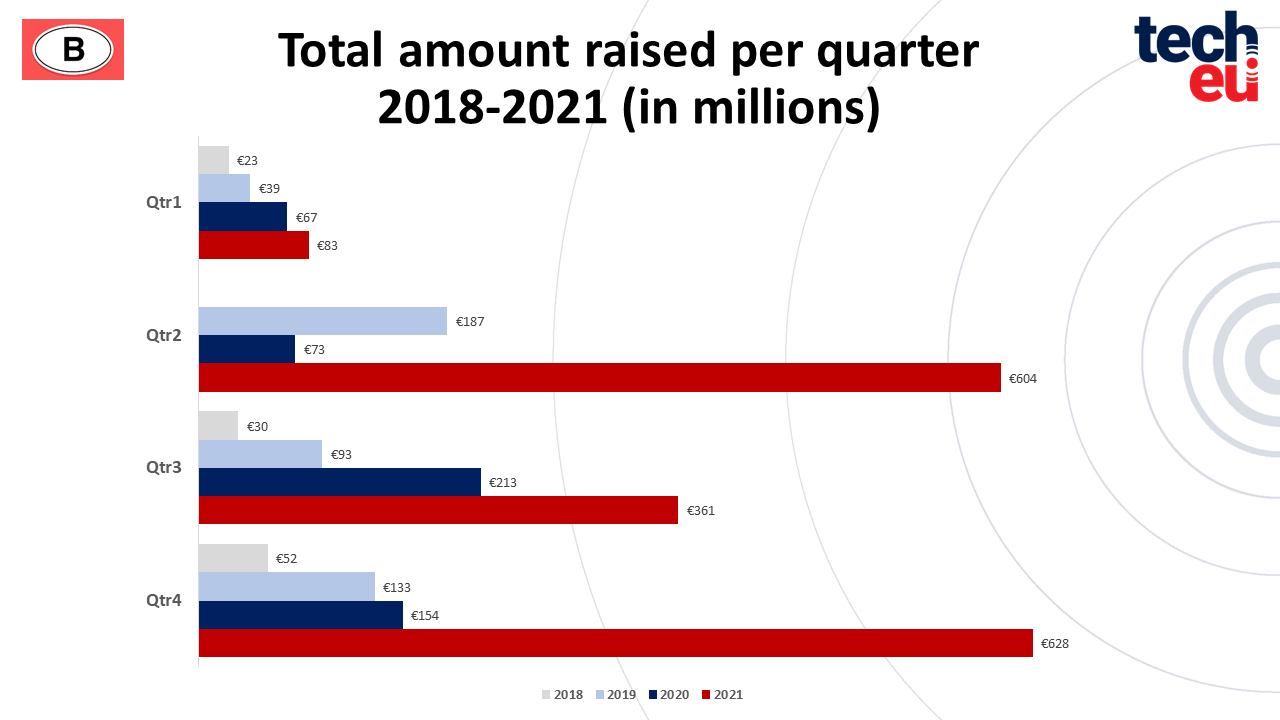 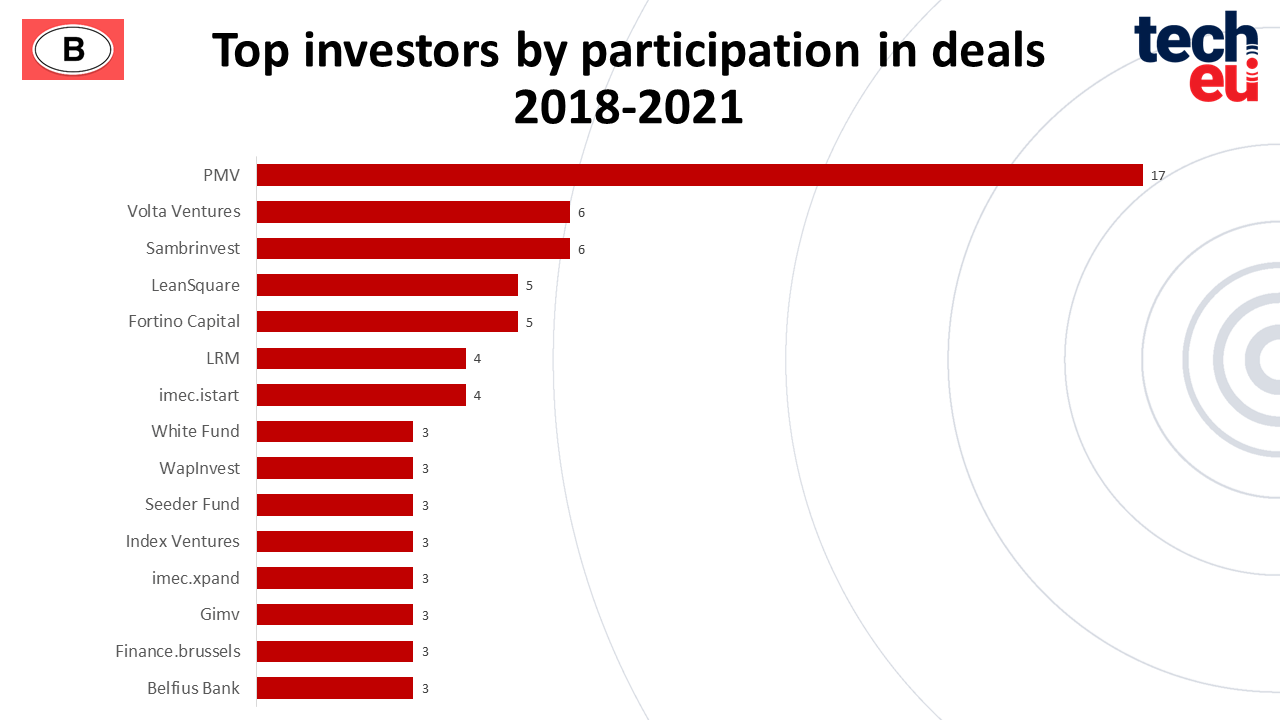 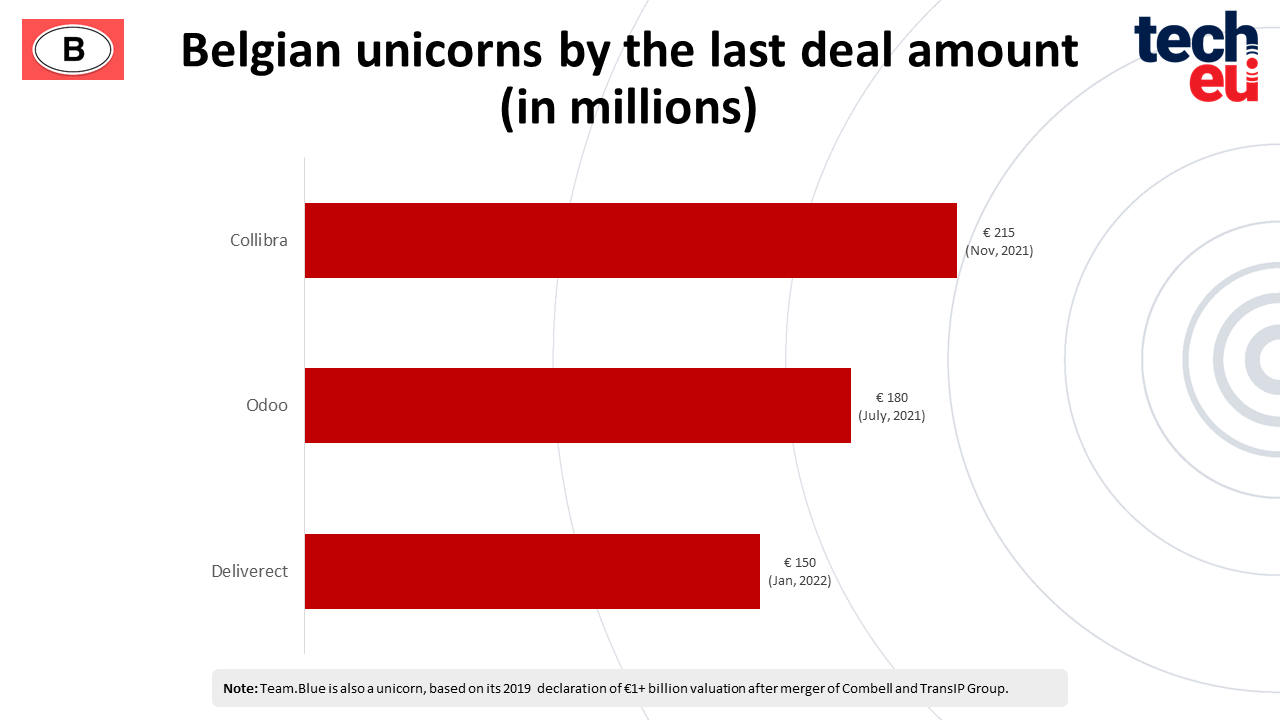 Belgian's brightest and best startups have been busy in the past four years, with a total of 76 exits. While the majority of the deals (64 to be precise) were undisclosed, the 12 that were disclosed hit a combined value of just over €2.1 billion. The biggest deal was Orange Belgium's $1.5 billion 75 percent stake in telco VOO in December last year.

In June 2019, Belgium's Combell merged with TransIP Group from The Netherlands, creating a new holding called team.blue, which, the two companies said, valued it at over $1 billion. Ali Niknam, who founded TransIP in his early twenties, and went on to found bunq, is one of our speakers at the Tech.eu Summit on 17 May.

Seventy-two companies participated in Belgian exits over the past four years, while 49 Belgian companies were involved with exit deals at home and abroad.

The highest-valued exit where a Belgium company was involved was the €4.4 billion takeover of Borsa Italiana by the pan-European Euronext stock exchange in 2020. 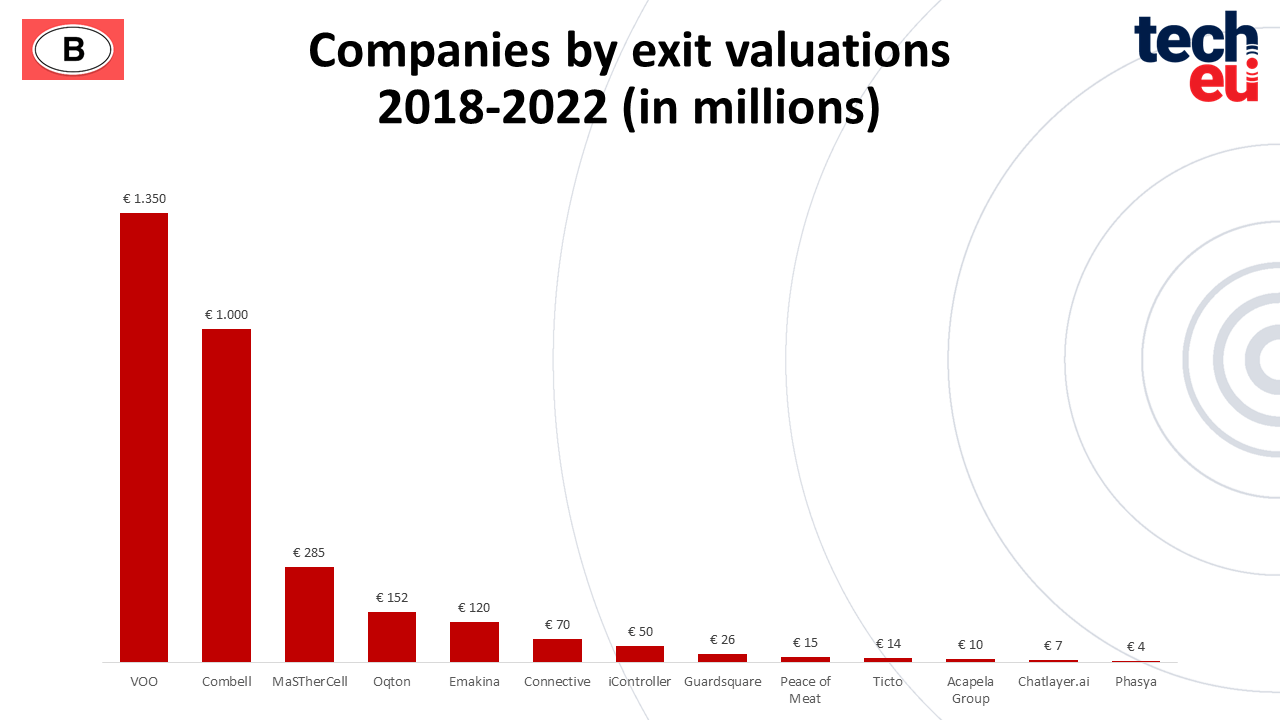 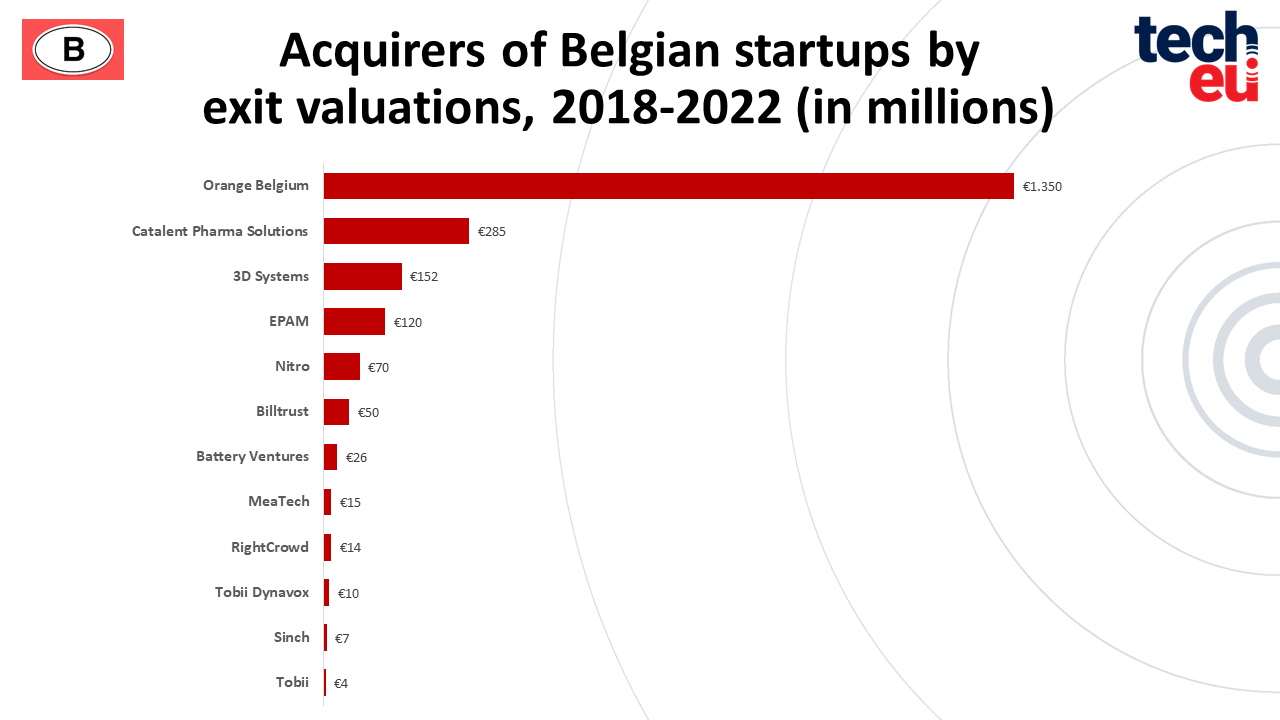 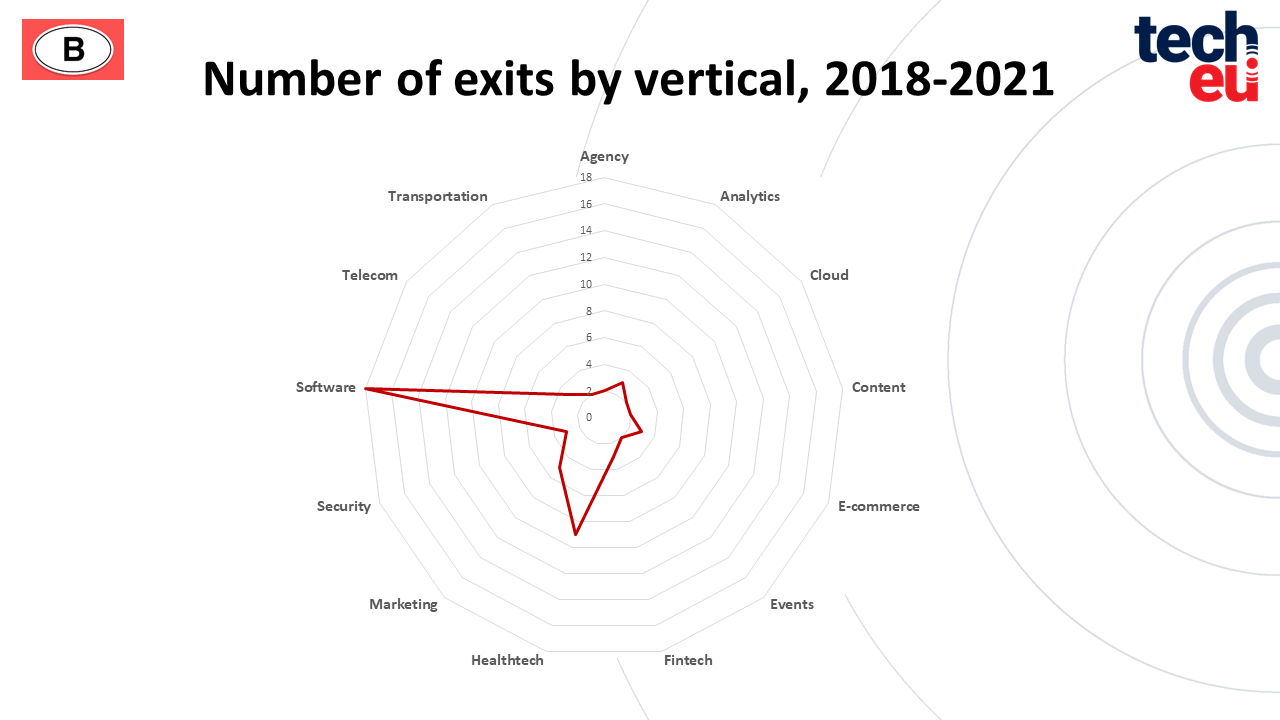 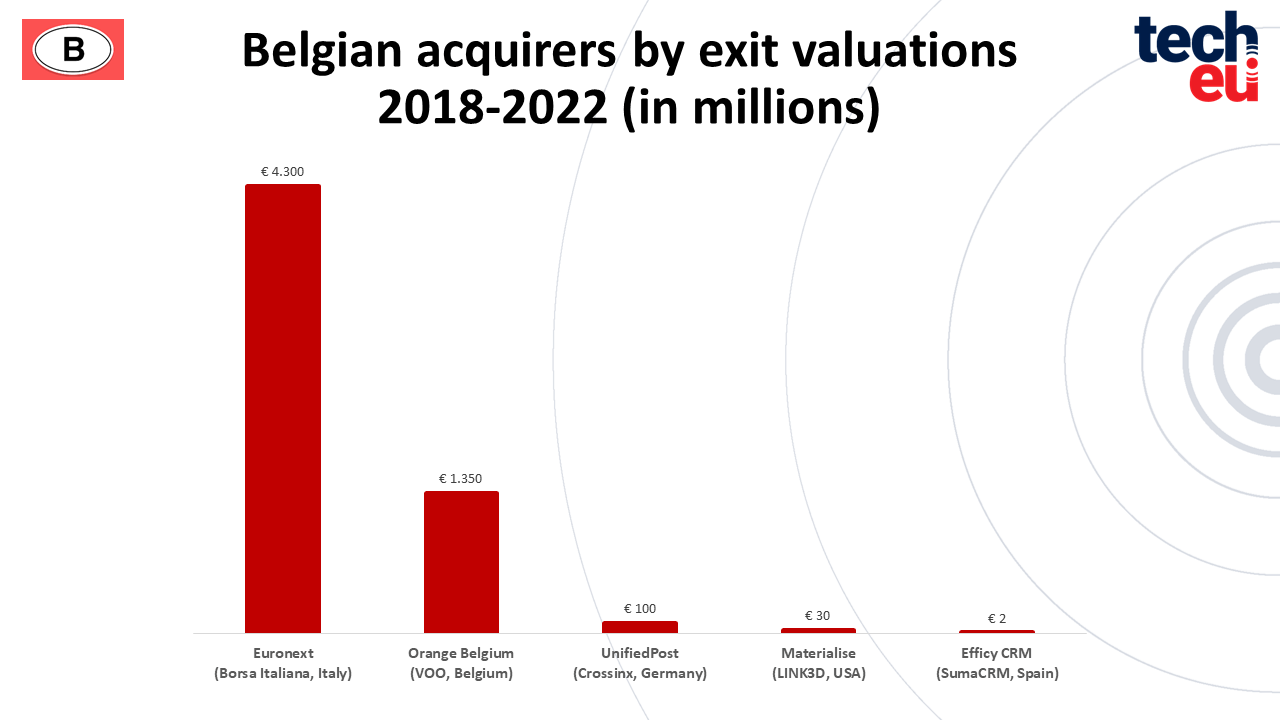 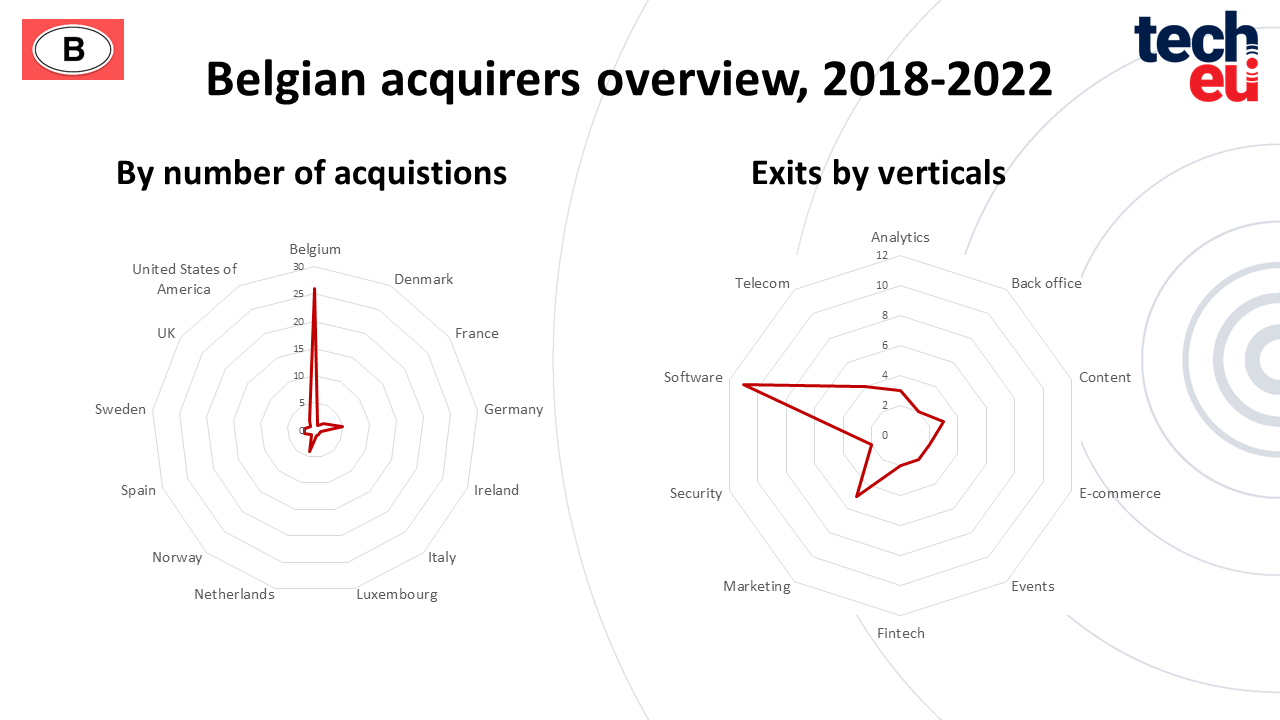 In the first three month of this year, 33 companies received funding to the tune of €440 million in total. Deliverect, the Ghent-based software maker that integrates online orders from food delivery channels into restaurants’ POS raised the Q1 total for all when it got a whopping €133 million in Series D funding in January. Deliverect chief executive Zhong Xu will be on stage at the first Tech.eu Summit on 17 May (tickets here!). 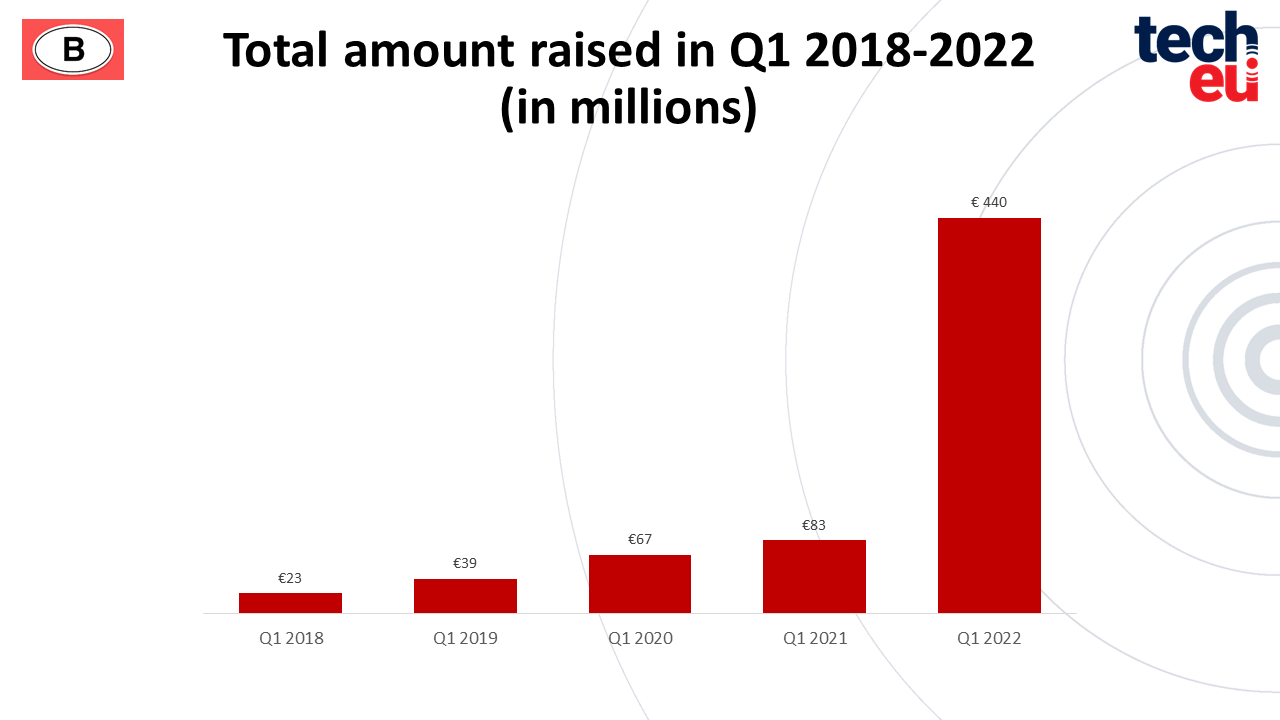 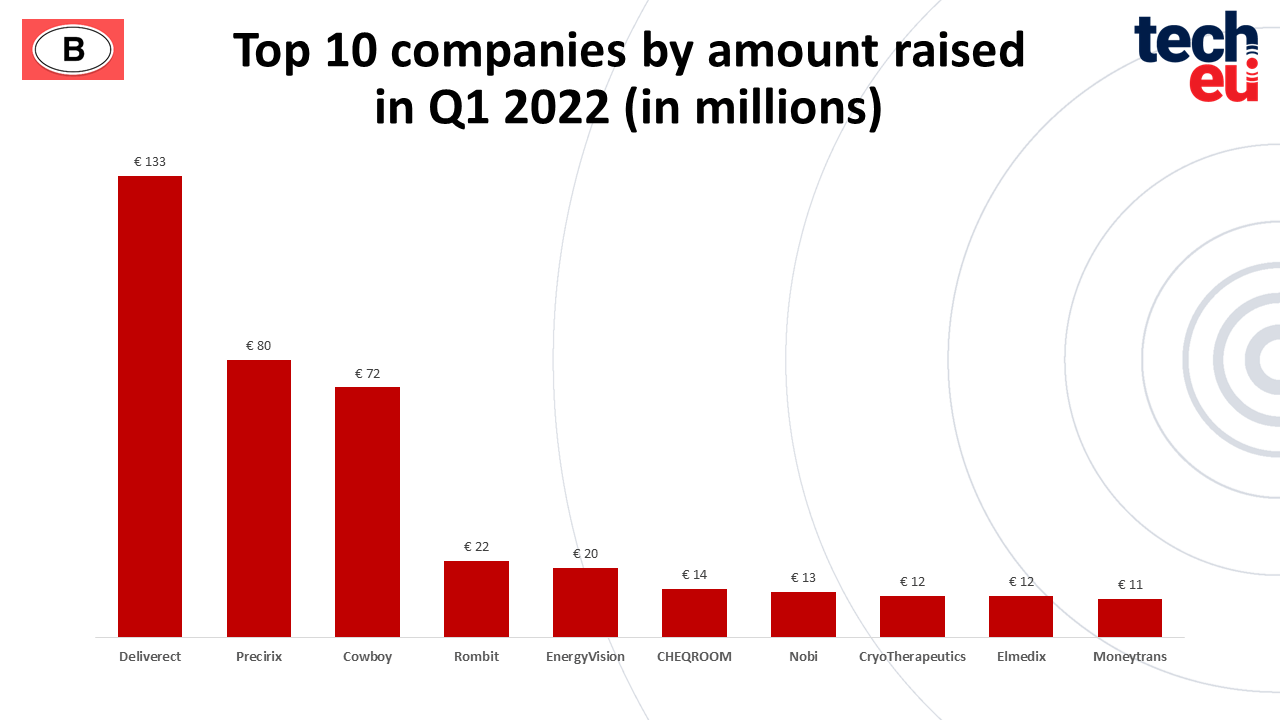 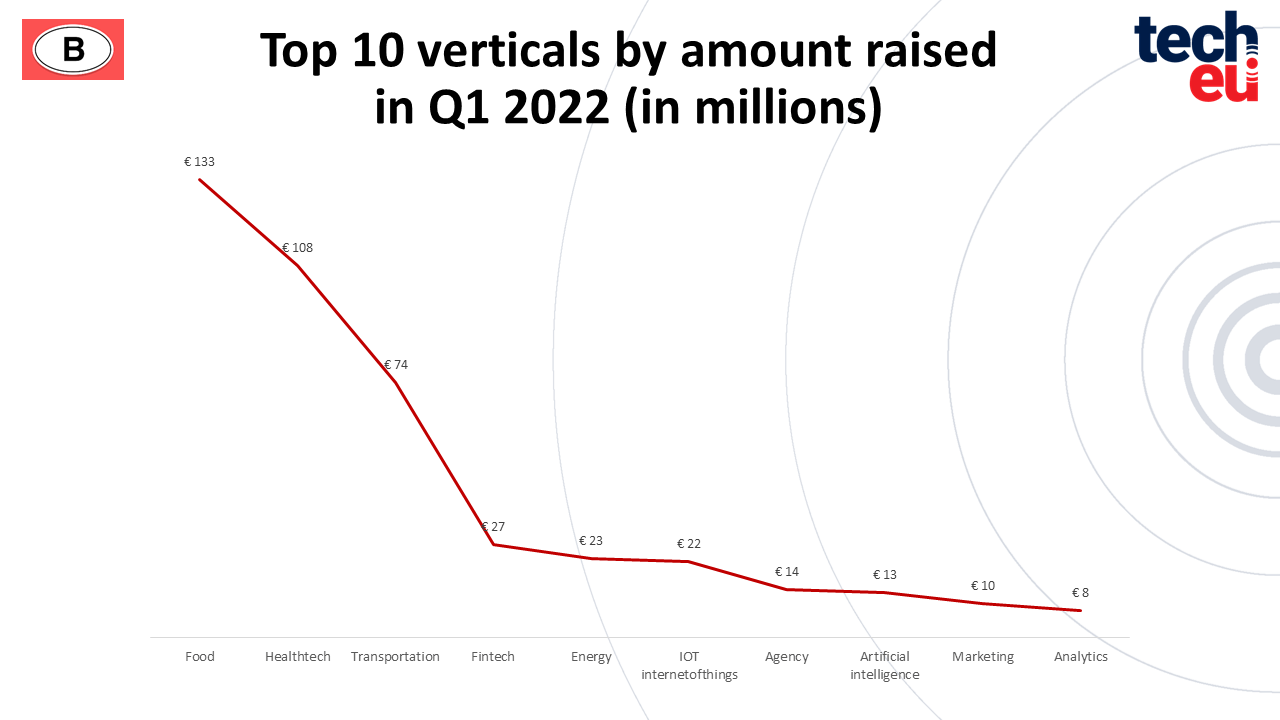 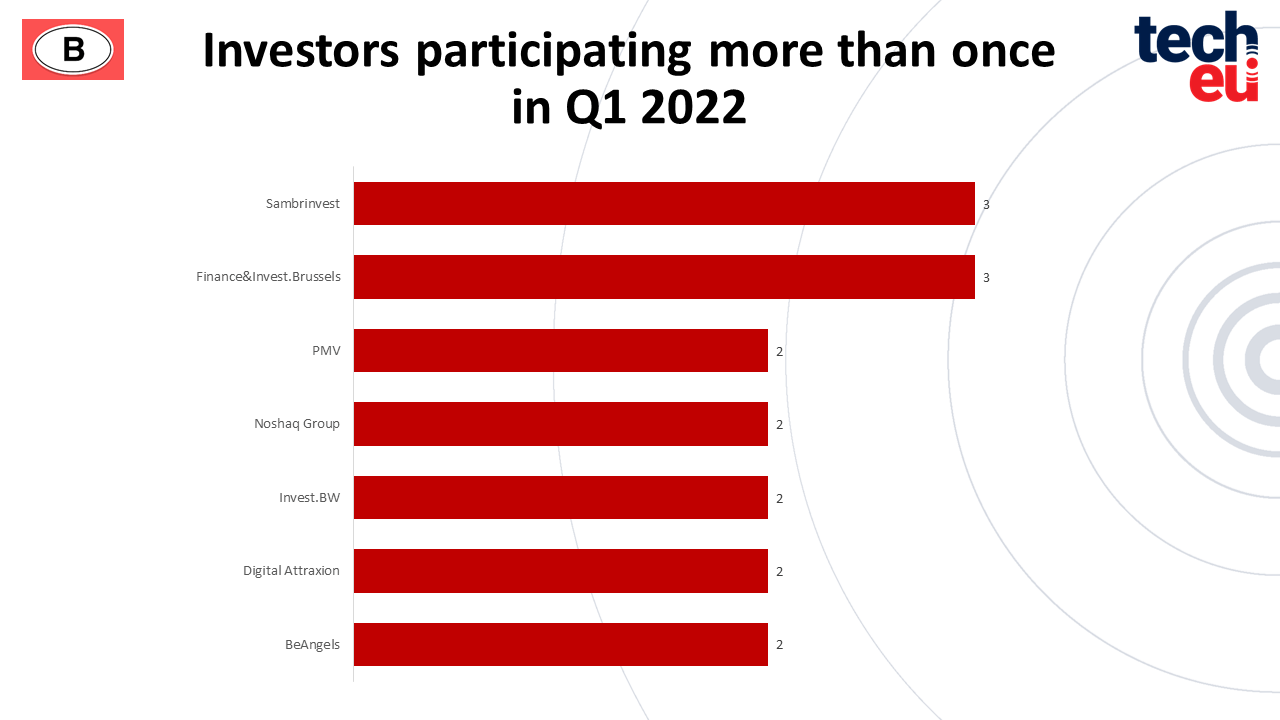 How is Belgium faring in terms of its share of the total European investment pie? Well, it's not in the top 10, which is dominated by heavyweights like the UK, Germany and France, but comes in at 11th place in terms of total amounts raised by each country's tech industry in the past four years. 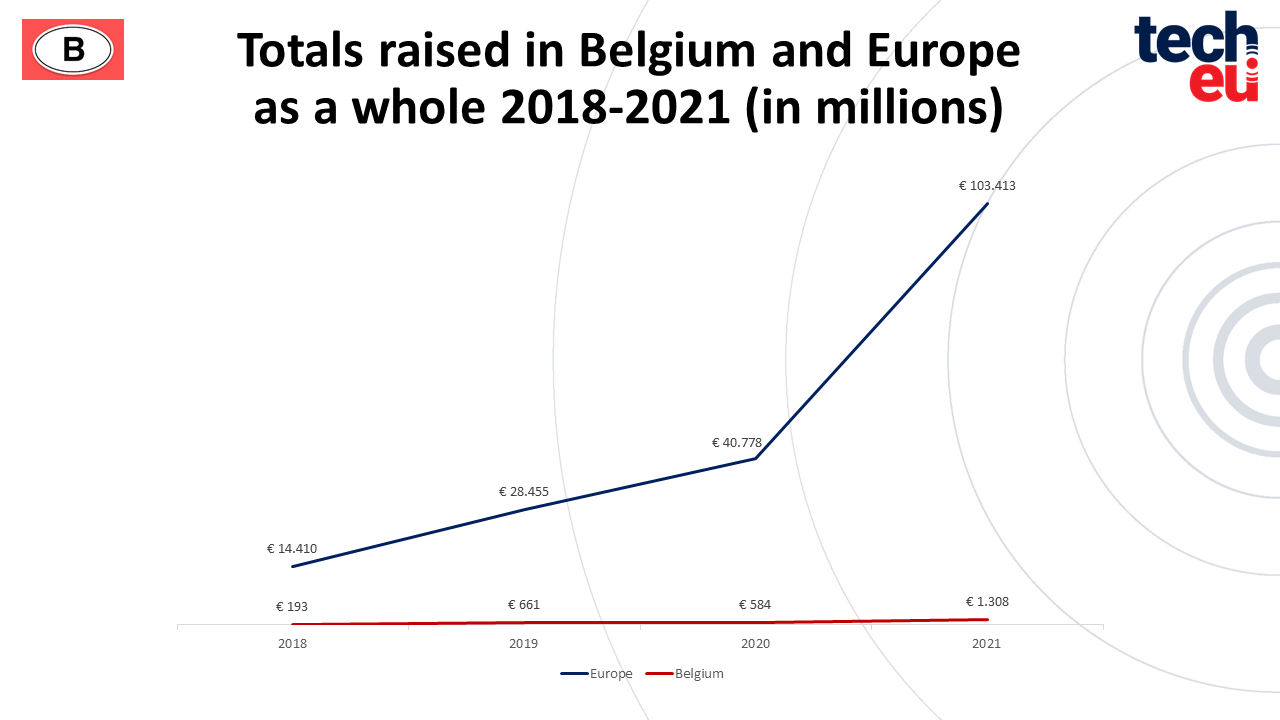 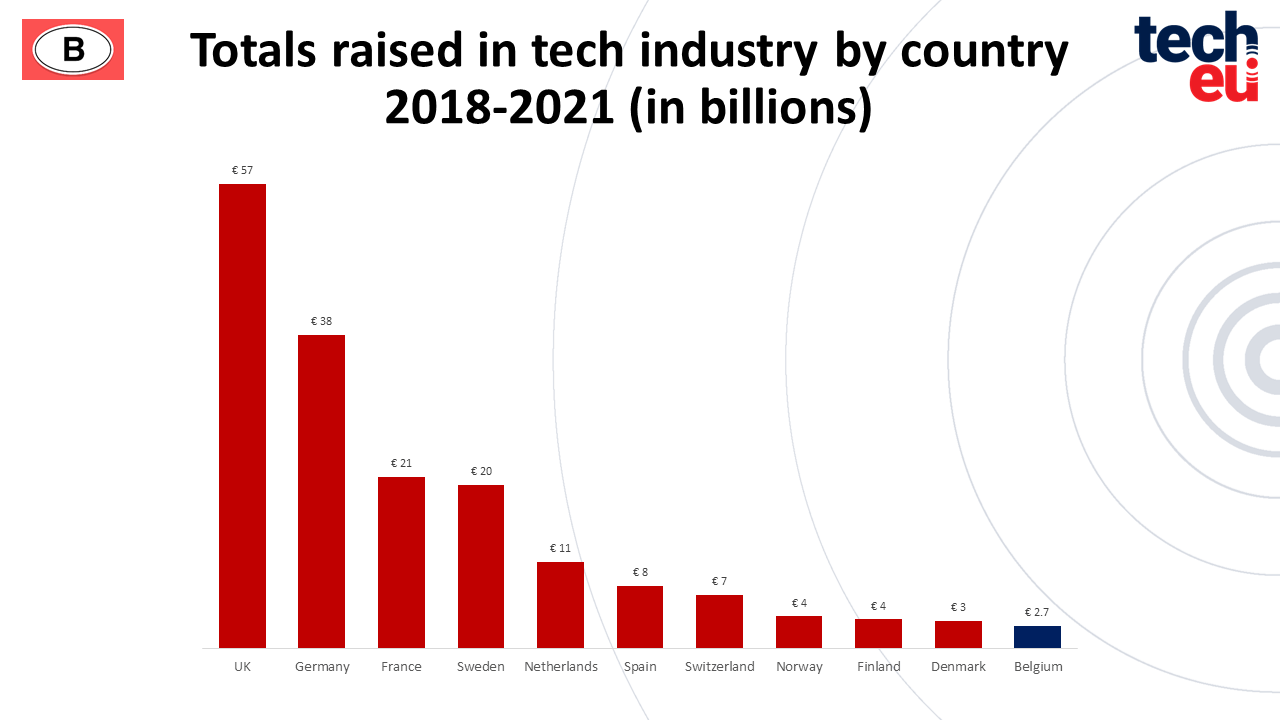 To find out more about the European tech scene, and hear from an awesome line up of investors, founders, and thought-leaders, come along to the Tech.eu Summit on May 17 in Brussels. Tickets here!

The Belgian Tech Report
1 like
2
Bytes and Beers: Belgium's burgeoning tech scene
Comments
Follow the developments in the technology world. What would you like us to deliver to you?
All

NEXT
PillSorted gets $6-million dose to build the pharmacy of the future
As predictive health becomes increasingly popular within the health tech industry, London-based…
Megha Paul