Google Chrome now has more than twice the market share of Internet Explorer in Europe: StatCounter

Gauging browser market share is not an exact science, and even the most widely known data providers such as Net Applications and StatCounter produce significantly disparate results because they are prone to use different methodologies and data sources.

Be that as it may, looking at their statistics often reveals interesting trends, particularly when looking at extended periods of time and zooming in on specific geographies.

The Next Web's Emil Protalinski yesterday looked at some interesting global market share data from Net Applications, which shows Google Chrome and the latest version of Internet Explorer growing, with almost every other browser slipping.

Net Applications - still - gives Internet Explorer the most market share around the world (57.91% across different versions of IE) while StatCounter paints a completely different picture.

StatCounter, which, for what it's worth, says it bases its results on "more than 15 billion page views per month, by people from all over the world onto our 3 million+ member sites", says Chrome is actually in the lead (43.92%) with almost double IE's global market share (23.24%).

Zooming in on Europe

When we look at only the data for Europe, we see that Google Chrome actually already boasts more than twice the market share IE had in December 2013 (40.23% for Chrome compared to 19.37% for IE). 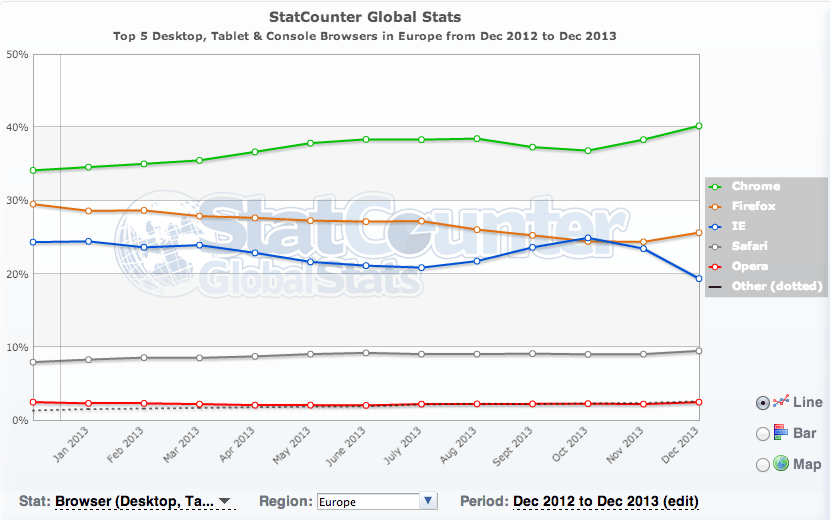 This is the first time Google's browser has surpassed the 40% mark and trampled IE with twice as much market share in Europe, according to StatCounter data, although the chart above shows that it came close quite a few times last year.

It's also the first time StatCounter shows IE dipping below 20% browser market share in Europe, while Safari is steadily making it way to reach the 10% milestone at some point this quarter.

Note that the chart above is for 'Desktop, Tablet and Console' browsers only. When we include 'Mobile' in the stats, this is what we get: 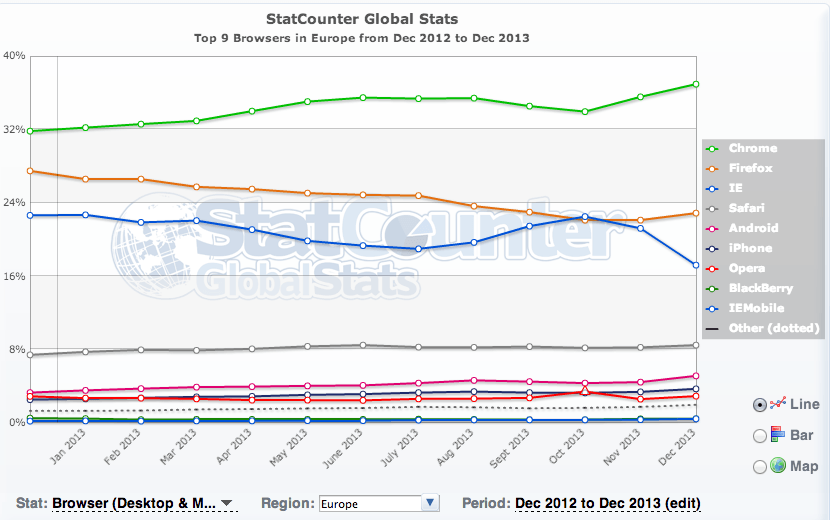 And this what we get when we limit the stats to 'Desktop' browsers only: 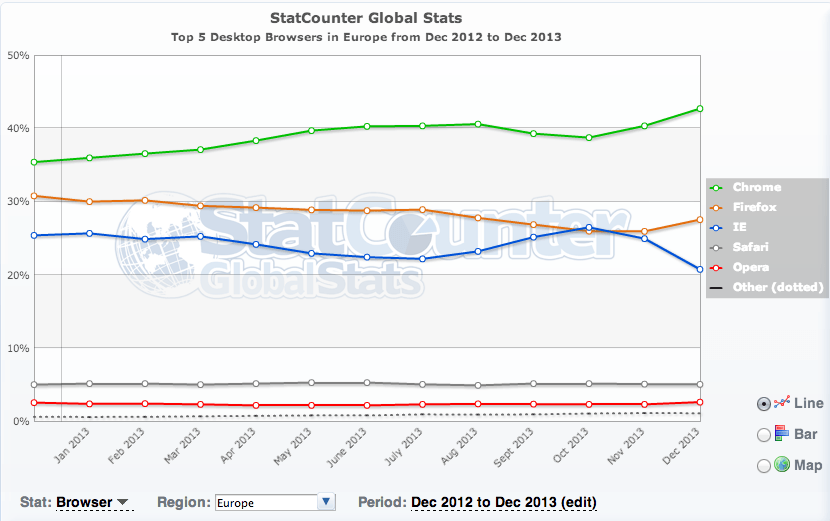 Similar results, as you can see: all three charts show a rapid climb for Google Chrome in the final quarter of 2013, and the opposite happening for Internet Explorer in the same time period.

Looking at worldwide stats, Chrome leads clearly but can't yet claim double IE's market share, although the writing seems to be on the wall.

Even if you don't trust StatCounter's data, it's impossible to overlook how successful Google Chrome has been in taking market share away from Mozilla's Firefox and, particularly, Microsoft Internet Explorer, in recent years.

To wit, here's a StatCounter chart of worldwide browser market share from July 2008 until today: 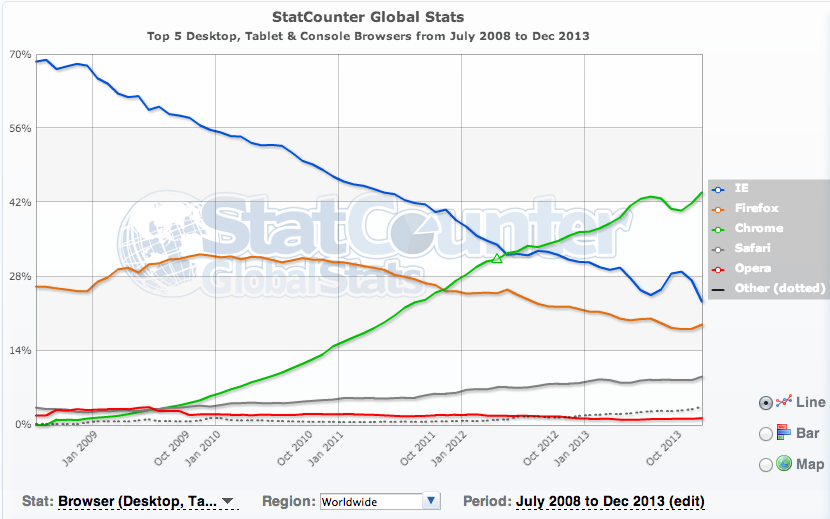 That chart shows Chrome overtaking them all in the span of just a few years, although as I mentioned all the way up on top: Net Applications has a different browser war story to tell.

Either way, it will be interesting to see how the top browsers fare in 2014.

Google Chrome now has more than twice the market share of Internet Explorer in Europe: StatCounter
Comments
Follow the developments in the technology world. What would you like us to deliver to you?
All

NEXT
The Valkee conundrum: I've been shining bright light on my brain for weeks now, and I don't know why
For the past few weeks, I've been sticking…
Robin Wauters