German startup Doo has decided to shut down its cloud-based document archiving and search apps after having raised $10 million in funding, but the team is looking to reboot and build new products.
Robin Wauters 17 February 2014
Share
Facebook Twitter Linkedin

The writing had been on the wall for a few months now, but now it's official: Bonn, Germany-based Doo has decided to shut down its suite of cloud-based document applications for lack of traction.

Founded in June 2011 by serial entrepreneurs Frank Thelen, Marc Sieberger, and Alex Koch, Doo offered a cloud-based solution that helped consumers and small businesses use native mobile and desktop apps to automatically collect and organise all of their documents in a single place.

In exactly a month (on Monday 17 March to be more precise), the Doo servers and service will be faded out, and the startup's apps will also be removed from all relevant stores (Mac App Store, iTunes Store, Google Play and Windows Store).

After launching the first Doo app for Windows 8 in October 2012, the company struggled to gain traction, but user growth was promising when it the app launched Mac OS X four months later.

However, the company now writes in its goodbye post, download and user activity figures dropped like a knife after initial installations, and the subsequent launch of native mobile applications for iOS and Android did not result in a notable acceleration in growth.

At the end of October last year, the startup announced that 100 million documents had been processed by over 200,000 users, which wasn't anywhere near the goals the company had set for itself - let alone enough to start monetising adequately.

Earlier this year, the situation became dire enough for Doo to take a tough decision:

After launching all these apps, delivering our core feature set and continuously improving on performance and stability, we still couldn’t generate the necessary growth and user activity. We had to face it. Either our hypotheses were wrong or we didn’t get the product right to address the problem. We simply do not seem to address the needs of a large enough audience.

Thus, as of Monday, March 17, 2014 at 4pm CET the doo servers will be shut down and the User License agreement for the use of doo is terminated with effect as of this date. The doo apps for OS X and Windows will continue to work locally, but the apps for Android, iOS as well as all features related to our server such as synchronisation among devices, connecting and synchronizing with cloud services, or online login to the doo user accounts will no longer work. 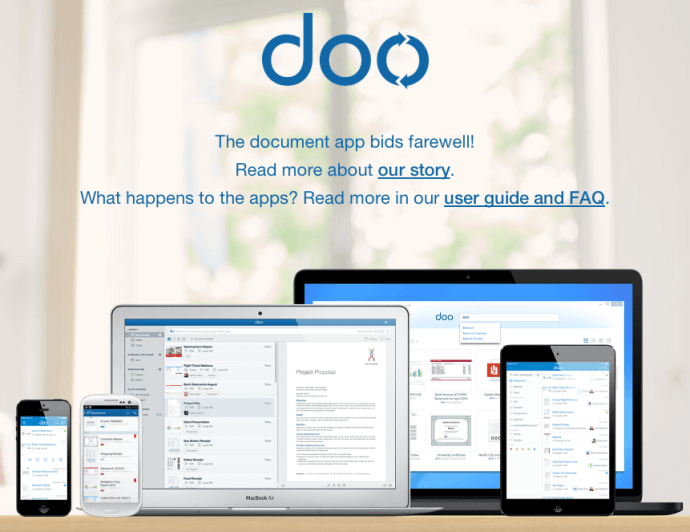 And thus ends the story of Doo, which had raised $10 million in funding from DuMont Venture, Target Partners, XING founder Lars Hinrichs and others. Or does it?

Even though we’ve been chasing the wrong rabbit, we have built outstanding cloud storage, sync and search technologies. Plus, we have great investors, who believe in our team. So there is only one option: we have already started working on new products based on what we’ve learned.

Looks like the Doo team isn't ready to completely throw in the towel just yet.

We've reached out to learn in which direction they're thinking in terms of new products and will update this post if warranted.

Document app Doo goes the way of the dodo (but the story isn't completely over yet)
Comments
Follow the developments in the technology world. What would you like us to deliver to you?
All