Most advertisements are irritating, but there’s something about mobile ads that make them particularly maddening.

Appsfire wants to change that.

After Instagram unveiled its in-stream ad formats in October of last year, there's been a lot of talk of the growing role of native advertising in the mobile ad industry. The announcement seemed like a logical next step for the Facebook-owned photo-sharing app but made even more sense after Facebook revealed earlier this year that mobile ads constituted 53% of its total ad revenue in the fourth quarter of 2013.

Appsfire's aim? To improve the mobile ad experience for users, advertisers and publishers at once

In the last couple of months, Appsfire – which has offices in France, Israel and the US – rolled out two other native ad formats named after Japanese food. Sushi, which was released when the company was still concentrating on app discovery, is its own version of full screen mobile ads while ura-maki wants to capture the user's attention without disrupting usage of the app.

Sashimi – the latest ad format that is automatically generated, produced, translated and formatted – promises to be easy-to-adopt, customizable and scalable for advertisers. It can be used for promotion of mobile app installs, app re-engagement as well as in-app product ads. 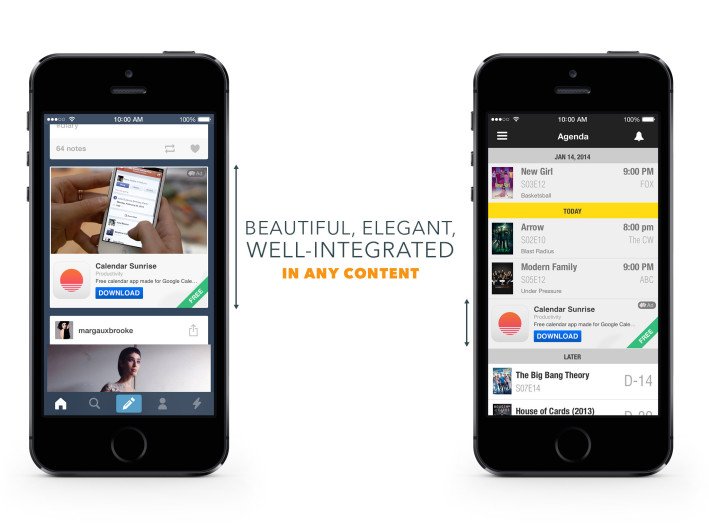 “What we're not doing (and don’t want to do): editorial content, mobile sites, direct marketing offers/offline coupons/branding. We’re focusing on what represents 90% of the spend of mobile marketing today in the app-to-app transactional market,” the company stated.

Sashimis fit with various feeds of content, including video, social networks and photo apps. The format is currently available on iOS. Appsfire said that availability on Android and HTML5 will be launching "in the coming weeks".

There's a reason why mobile ad startups continue to pop up... Not only does this space have plenty of room to improve, the mobile advertising market is also growing steadily.

According to a Gartner report released earlier this year, global mobile ad spending is expected to reach $18 billion this year and forecast to be worth $41.9 billion by 2017. While the North American market has the strongest focus and investment in mobile advertising, Western Europe is at a slightly slower scale but is expected to remain similar to North America’s during the forecast period (until 2017).

"Mobile ads suck" – Appsfire rolls out in-stream ad unit Sashimi
Comments
Follow the developments in the technology world. What would you like us to deliver to you?
All