In a surprise move, small Belgian startup Radionomy recently took Winamp and SHOUTcast off AOL's hands. We wondered what's going to happen next, so we visited the company to ask its CEO.
Robin Wauters 14 March 2014
Share
Facebook Twitter Linkedin

Alexandre Saboundjian tells me the deal between AOL and his company, Radionomy Group, was reached in a mere 10 days - not counting the time it took to get the paperwork out of the way.

It was an unusual deal to boot: in the beginning of this year, Radionomy - a small but growing Belgian upstart - acquired from Internet giant AOL both its media streaming software SHOUTcast and legendary media player Winamp - before AOL got a chance to shut them down.

Fifteen years earlier, AOL had acquired both from a startup, called Nullsoft, for a reported $80 million in stock. Radionomy didn't cough up nearly that much, but still a heck of a lot considering its own current size.

Backed by some of its investors (which include reputable American VCs like Union Square Ventures and Bain Capital, as well as CBS), Radionomy paid between $5 million and $10 million for the properties, with AOL retaining a 12% stake in the business.

A speedy agreement, with the help of a certain NYC-based investor

That the deal happened so quickly involved - not uncommonly - a great deal of luck and good timing.

Radionomy had just merged with audio ad network company TargetSpot at the end of last year, and when Saboundjian caught wind of AOL's rumoured desire to sell its Winamp and SHOUTcast assets off to Microsoft or whoever else would join at the bidding table, he reached out to TargetSpot investor Fred Wilson from USV to get a 'warm' introduction to AOL.

SHOUTcast was the real target of the acquisition, enabling Radionomy to grow almost instantly from hosting roughly 7,000 to about 60,000 online radio stations. It gives Radionomy a lot of scale for its online radio station hosting and management tools, particularly in the United States, and now-subsidiary TargetSpot an opportunity to grow its business in Europe and beyond.

Radionomy is currently finalising a new round of financing that will allow the company to grow its staff and integrate SHOUTcast with Radionomy completely. 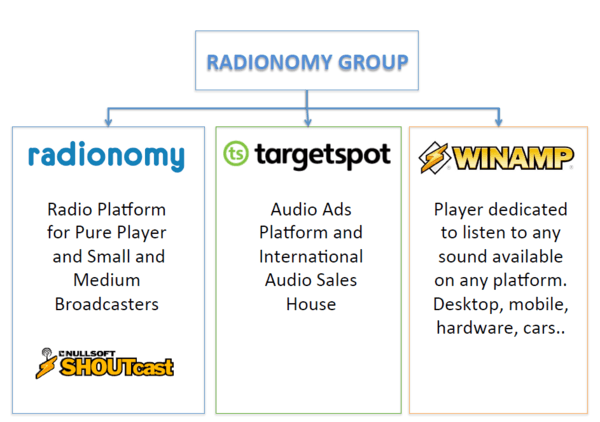 Winamp: the little extra that could

For Radionomy and its backers, Winamp was considered a 'nice-to-have', until Saboundjian looked at the numbers and was astonished by how popular the media player still is today.

Another, brand new team based in its Brussels offices will be dedicated to upgrading Winamp for the next generation of users, platforms and music streaming and distribution services.

Saboundjian was careful not to go into too many specifics, but it sounded to me like the company will likely transform Winamp into a hybrid media player that caters well to a wide range of mobile devices, as well as connected car dashboards. He also promises new features, without providing details.

Winamp's future on the desktop is, let's say, less certain, but the new version of the software will find its way to places that it wasn't available in before. As mentioned earlier, Radionomy has started conversations with car manufacturers to explore possibilities for collaboration and integrating Winamp into the dashboards of Internet-connected vehicles.

The retooling will not happen in a hurry. As alluded to earlier, SHOUTcast is Radionomy's priority for now, so don't expect any major news about the future of Winamp until the end of this year.

Nevertheless, users who were understandably worried about the future of Winamp apparently don't need to fret too much: it genuinely seems like Radionomy is devoted to making sure the brand lives on in a modern media player that can rival the best of them. Starting in 2015, that is.

Radionomy CEO discusses the quick-and-sturdy AOL deal, and the future of Winamp (video interview)
Comments 1
Follow the developments in the technology world. What would you like us to deliver to you?
All

NEXT
Inside the belly of the beast: how Mendeley is thriving after its acquisition by Elsevier
I first spoke with Victor Henning (pictured…
Ivo Spigel