Alongside the expansion of its operations, European VC Earlybird has announced a new addition to its investment team: LinkedIn co-founder Konstantin Guericke, its first partner based in Silicon Valley.
Charmaine Li 02 April 2014
Share
Facebook Twitter Linkedin

Early-stage investment firm Earlybird, an active VC firm with offices in Berlin, Munich and Istanbul, has today announced the latest addition to its investment team: LinkedIn co-founder Konstantin Guericke (pictured below), who will be based in Palo Alto and work as a portfolio development partner.

Alongside the news, Earlybird has rolled out new support services for its portfolio companies, which includes master classes, meet-ups and networking events to facilitate knowledge exchange between its entrepreneurs.

Guericke, who previously held an advisory role at Earlybird, told tech.eu in an interview that he will now be working across the portfolio to help scale up companies in terms of growth, engagement and revenue stream.

Part of this will also involve positioning these companies to get a larger round from a Silicon Valley or London venture firm. 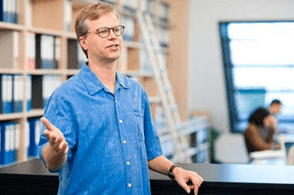 With the addition of a partner that will be based in the United States, does Earlybird have any plans to begin investing in American startups?

"No," responded Guericke when asked that very question.

"We think there are plenty of VC firms here that cater to that, so it's best for us to focus on our competitive advantage."

Similar to the difficulty that some European investors face when attempting to invest successfully in the US, Guericke said that US firms find it difficult to successfully invest in European markets such as Germany because it's hard to do the due diligence on it.

"This is where partnering makes sense – a lot of US firms are interested in gaining exposure to the ecosystem in Europe," he said when explaining how Earlybird works with American VC firms.

A recent round for Berlin-based startup 6Wunderkinder, where Earlybird partnered with Sequoia, is a prime example of this. The investment marked the American VC firm's first foray into Germany's startup scene.

Following its investment focus on European companies that have potential to be a "global leader in the category", Earlybird announced in January that it was raising $130 million for a new early stage fund  focused on startups coming from Turkey and Central and Eastern Europe. About 20 investments are planned for the fund, dubbed Earlybird's Digital East Fund (EDEF).

Global ambitions: European VC Earlybird adds LinkedIn co-founder as its Silicon Valley-based partner
Comments
Follow the developments in the technology world. What would you like us to deliver to you?
All

NEXT
A close-up of MUBI and its plans to take on Netflix and Amazon Prime with a curated cinema platform
Picture this: It’s Sunday evening, you’re…
Charmaine Li