As crowdfunding grows up across Europe, the Spanish government seems determined not to play ball

The Spanish government has drafted a regulatory proposal for crowdfunding, and has included so many restrictions for projects, potential funders and platform operators that it seems to want to kill it.
Alex Barrera 03 April 2014
Share
Facebook Twitter Linkedin

(Editor's note: For clarity's sake, the new regulation draft covers equity-based crowdfunding. Essentially, any kind of crowdfunding where there is a capital gain involved, either through equity sharing or money. Regular donation crowdfunding is still unregulated and unaffected by this draft.)

Crowdfunding has become a very viable funding option for many a startup and a wide variety of projects. Countries like Spain, where access to capital has been frozen after the financial crisis, are natural markets for it - the country has experienced an explosion of such services and the community around them has grown substantially.

As more people turn to equity crowdfunding campaigns, the need for comprehensive regulation has been a sore point in recent years.

Following in the footsteps of countries like UK, Belgium or Italy, the Spanish government diligently drafted a regulatory proposal for equity-based crowdfunding platforms and unveiled it last month.

The only problem? It kinda sucks. 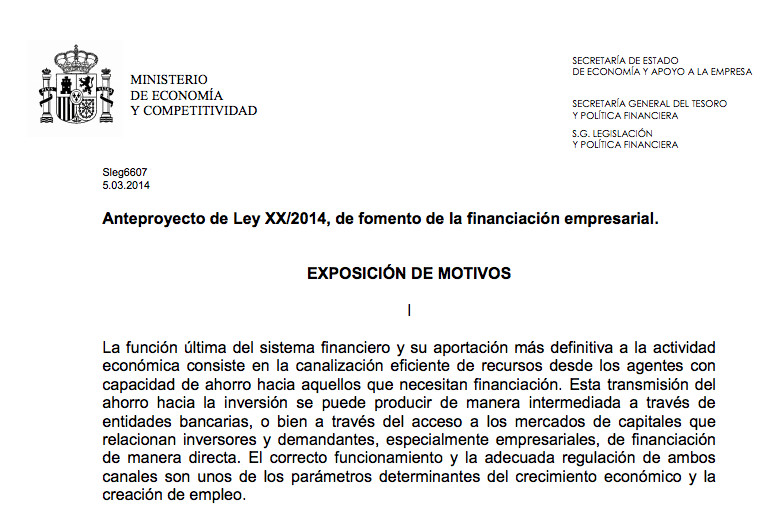 The draft has raised major alarms among both the press and in the Spanish crowdfunding community. The regulation is seen as a good first step but still very far from what it should look like. It's surprising that Spanish regulators haven't been paying more attention to the criticism other countries are receiving on their own drafts, for example in the US.

The first thing that is striking about the proposal is the economic restrictions imposed on investors. As far as it goes, they can only invest up to 3,000 euros per project within the same platform. It also stipulates an investment ceiling of 6,000 euros per platform in a 12-month period.

If this sounds stupid, it's because it is. According to Kickstarter's numbers from 2013, 807,733 people backed more than one project – that's 27% of the platform's user base during that year.

No one understands where exactly these limits are coming from, but a quick look into the draft sheds some light about the underlying reasoning:

"The limits imposed to investors using such platforms intends, on one side, to restrict this activity to non-professional minority investors, and on the other, to restrict the potential loss that could happen because of the use of such channel."

The arguments are demolishing and highlight all that's wrong with what the uber-protectionism Spaniards have been subjected to in recent decades. It's true that the Spanish crowdfunding ecosystem is still nascent, but two of the top funded projects in 2013 have already surpassed the 200,000 euros mark.

While the press has focused on previous restrictions, the draft actually hides several other incredible 'gems'. For starters, the money raised by the platform can't be used by a third-party to do other investments, essentially rendering services such as Crowdcube illegal.

Additionally, any project that uses an equity crowdfunding platform in Spain will need to be incorporated as a private limited company (Ltd.),  which further restricts the pool of potential crowdfunded projects.

The total amount raised by any crowdfunded project involving equity is – of course – also limited. Specifically, to a maximum of one million euros. This would make it impossible for campaigns such as Pebble, Oculus Rift or Ouya to even exist.  Even more, initiatives such as Seedrs' own funding campaign surpasses that figure by far.

If that wasn't enough, under the new proposed regulation, projects won't be able to raise more money than they asked for originally. While this might seem reasonable, most campaigns intentionally lower their funding targets so that it seems achievable to reach their true, intended goal via oversubscription funding. This won't be legal in Spain under the proposed legislation.

The draft also has a whole section on forbidden actions on equity crowdfunding platforms, which include doing any kind of advertisement about their published campaigns or drawing any fees based on the success rate of the campaign. Incidentally, this is precisely the business model of most crowdfunding platforms. Removing such fees would basically kill any economic incentive to build such services.

Finally, equity-based crowdfunding platforms will need to be incorporated as a Spanish corporation – either with a share capital of 50,000 euros or a social responsibility insurance that covers 100,000 euros in damages or 150,000 euros a year in complaint coverage.

Of course, any project pleading money in the platform must be incorporated in Spain too.

There are more interesting parts to the draft, like Article 45, where they explicitly forbid the platforms from competing with already-established financial institutions, such as banks or VC funds, and stipulate what kind of services they can or cannot offer.

The recent draft, which attempts to regulate equity crowdfunding platforms in Spain, is a good first step into solidifying it as a new viable funding option for many in the country. Nevertheless, it's very clear that regulators are lacking experience or knowledge on the area they're attempting to regulate.

More work is needed on the legislation and more parties need to be involved in drafting a final, more useful, regulation. Furthermore, the government should keep tabs on what's happening in other countries in this sphere and pay attention to what the community really needs.

What could and should have become a major source of relief for many entrepreneurs and crowdfunding platform operators, is now the exact opposite. One can't help but wonder what exactly the European Commission is doing about this and whether any help will come on time.

As crowdfunding grows up across Europe, the Spanish government seems determined not to play ball
Comments 6
Follow the developments in the technology world. What would you like us to deliver to you?
All