From Vienna to Boston: The journey of Seedcamp, Techstars alum Codeship

Rewind to July 2011: It's Mini Seedcamp Ljubljana – a one-day event bringing together emerging startup talent, seasoned entrepreneurs, mentors and investors from the Balkans and beyond.

It was quite an event. The Slovenian capital was at its prettiest with cafes and restaurants glistening by the river in the evening. Seedcamp mentors were out in full force, among them Mike Butcher, Paula Martilla and, of course, the whole Slovenian startup gang.

My co-mentors for that day were Tom Fleming of Venrex (pictured second from left below) and Eyal Lifshitz (pictured left), then with Greylock and who is now running his own startup BlueVine.

The highlight of the day was Fred Destin's "Startup Lifecycle" talk – one of the best I've heard before or since. 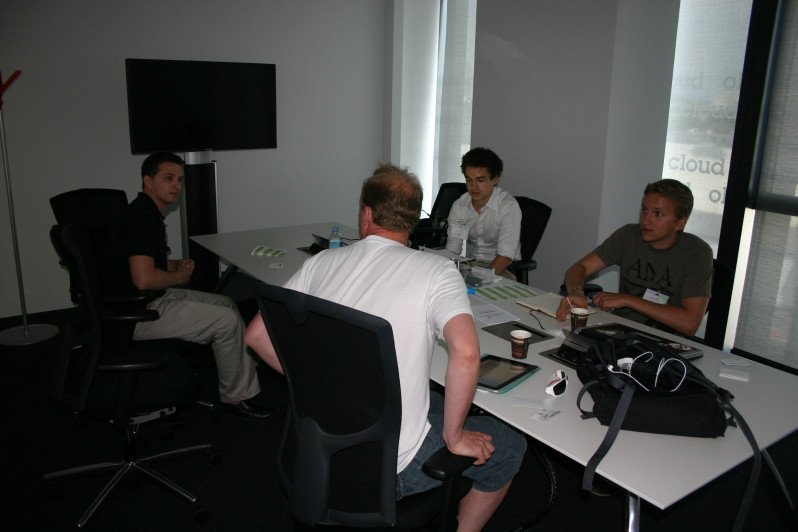 Among the 20 hopeful startup teams at the Mini Seedcamp were 'Mo and Flo'.

'Mo' is Moritz Plassnig (second from right above) and 'Flo' is Florian Motlik (pictured right). They came to Ljubljana from their nearby base in Vienna – where their third co-founder UX expert Manuel Weiss was holding down base during the event. Their project was Railsonfire – a cloud-based development tool/environment for, unsurprisingly, Ruby on Rails developers.

That year, the team didn't make the cut as local winners.

But after reapplying a year later, the startup officially joined the Seedcamp family in early 2013. Along with the announcement, the team rebranded themselves as Codeship and revealed that they had built "a testing and deployment solution for teams with all kinds of technology stacks", and not only Ruby on Rails.

From there, the Codeship joined and graduated from Techstars in Boston and, earlier this year, scored a $2.6 million Series A round. Not only that, the company is now growing "faster than ever before", according to Plassnig, Codeship CEO and co-founder.

With the latest news, I caught up with Plassnig to talk about the startup's journey from Vienna to Boston, lessons learned from participating in two highly regarded accelerator programs and how their product will continue to support software developers in the future...

Immediately after Mini Seedcamp Ljubljana in 2011, Plassnig set up a closed Facebook group for everyone who participated to keep in touch.

While he and I were discussing the community at the time, we thought about renaming the group from "Seedcamp Ljubljana" to "New Europe Startups" in order to encourage everyone from the wider Central and Eastern Europe area to join the discussion. Since then, the Facebook group has grown to more than 2,400 members and is a great forum for the regional community.

Around that time, Plassnig and his friends were very active in building the Austrian and regional startup ecosystem through the platform STARTeurope, which eventually later evolved into Pioneers.io (organizers of the much-hyped Pioneers Festival in Vienna).

Soon afterwards Plassnig, Motlik and Weiss  decided that they needed to get out of community building and focus on their product full-time – without distractions

"If there was one mistake we made," said Plassnig, "it was not going full- time into this project earlier."

Seedcamp, the second time around

I was curious about why the project was dismissed by Seedcamp in 2011 and then made it on the second attempt.

Plassnig commented: "We were really inexperienced kids in 2011. We had a pretty clear idea about the product and potential of offering continuous integration tools – first to the Ruby community and then later to others – but we literally had no clue what it would take to build the company and grow the business."

"Being part of STARTeurope/Pioneers was very valuable," he added, "I learned many things and grew a lot personally from early 2011 until late 2012 – and so did everybody else.“

Aside from personal development, their project had also gone through significant changes.

In the summer of 2012, the founders decided to give up on the various other projects they were involved in and focus completely on Codeship. By the time they applied to Seedcamp again, they were a dedicated team with important news: recurring revenues from happy customers.

When asked about the differences between Seedcamp and Techstars, Plassnig responded: "Both were very valuable in their own way."

"By the time we were accepted to Seedcamp, we had moved to Berlin and set up an office there," he said. Although based in London, Seedcamp works with teams throughout Europe that are not based on-site (as opposed to Techstars) and Plassnig saw that as an advantage for them.

When it came to Techstars, the company ended up moving to Boston for the three-month program, which Plassnig described as "very, very hands on and intensive". However, having worked in one place and within close proximity to all the other teams, he also began to see the value in the Techstars approach.

After having so much experience with accelerators – how helpful does he think these programs are for startups?

"It's cool to be part of a well-known accelerator but it only goes so far. At the end of the day, you are running your company and you need to build the business," he said. "Obviously, mentors from these programs are super valuable in opening doors, which otherwise you might not have access to."

Forget the "glamour" of being part of a well regarded program, advised Plassnig, instead, founders should focus on growing the project and making a success of it.

Startups often have a lot of pressure to setup shop in San Francisco, so was that ever an option for Codeship?

"We looked at this option closely," he said. "San Francisco has some advantages but there are also huge disadvantages. Hiring good people there is absurdly expensive."

"Boston is much easier to work from if part of your team is in Europe. We can handle the six-hour time difference from the East Coast whereas a nine-hour difference is really prohibitive," Plassnig added. "Our investors, although Boston-based, didn't require us to stay here but it was certainly more practical for all of us."

Though Plassnig was not willing to go into any financial indicators about the company's performance or specify the user base, he said Codeship is used actively by "thousands of companies" and "several thousands of software engineers".

Currently, the company consists of seven people and they are looking to expand to about 20 by the end of the year. The Codeship team, including the co-founders, are evenly split between Vienna and Boston, from which they want to conquer the US and global market.

From Vienna to Boston: The journey of Seedcamp, Techstars alum Codeship
Comments
Follow the developments in the technology world. What would you like us to deliver to you?
All

NEXT
German startup Doo rebuffed acquisition interest from Dropbox prior to product shutdown; moves on with Scanbot
According to multiple sources, Bonn,…
Robin Wauters