With 20 million users and a new CEO, Doodle wants to be the global leader of online scheduling

Online scheduling company Doodle made some important announcements in the beginning of 2014, we chat to the company's new CEO about how this will affect users and what's next...
Charmaine Li 11 April 2014
Share
Facebook Twitter Linkedin

"Many people don’t know that we’re actually a European, or Swiss, startup. Whenever I come across people using Doodle in Europe, half of them think it’s an American company,” said Michael Brecht, who joined online scheduling startup Doodle as CEO in February.

Founded in 2007 by Michael Näf and Paul E. Sevinç, Doodle offers a suite of online scheduling services for individuals and businesses. Recently, the company announced it had garnered 20 million monthly users worldwide.

Earlier this year, the Switzerland-based company – which aims to simplify the process of scheduling events – made a couple of important announcements about the coming year...

First, that Doodle co-founders would be stepping down to let a new team, led by Brecht, take charge.

Second, that Swiss media giant Tamedia – which already owned a 49% stake in Doodle – would be acquiring the majority of the company as well as invest to push the company’s international expansion.

Tamedia runs several publications, including online title 20 Minuten Online, newspapers 24 heures and Le Matin as well as magazines such as Femina and Bilan.

Following the news, we caught up with Brecht – Doodle’s new CEO – to chat about how these changes will affect users, what his vision is for the company and which markets are on the radar...

With various scheduling features already integrated into popular platforms, such as Facebook and Gmail, why would users turn to Doodle?

“Everybody I’ve come across who’s used it says it’s a very strict approach to being clean, from a design point of view, and because it’s easy to use, that stands out,” Brecht told us.

How it works: Organizers can create a poll with several date options for an event and participants can indicate their availability online. Once an option is selected, the date is confirmed and the poll can be closed. 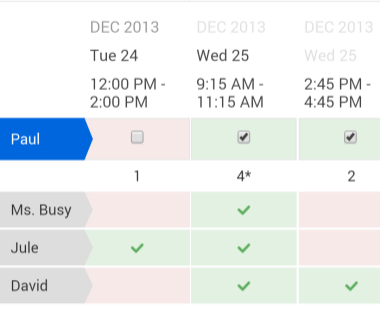 There’s no doubt that Doodle is simple (and free), but it also requires changing to another application in order to complete a small task.

In a digital world where there seems to be a platform that you can use to do any specific task "better", users may be wary of adding another unfamiliar service to an ever-increasing roster of apps and services.

Nevertheless, Doodle claims it only takes two emails "and you're done".

Despite departing from Doodle's management team, both Näf and Sevinç will remain on the board of directors, said Brecht.

In the new role, Brecht – a serial entrepreneur with more than 20 years of IT experience – will be working closely with the heads of product, sales and engineering. At the moment, the company is a team of 25 spread across several countries.

As for the direction of the company, Brecht doesn't see Doodle deviating far from what it's currently doing.

"My vision for the future is to grow from a strong position as the scheduling entity to become a global solution for everybody who’s scheduling appointments, whether that be in the business world or private world,” he said.

When asked how Doodle's structural changes will affect its service and products, Brecht responded:

"For the users nothing will change immediately, we will continue being the scheduling services for them. The main change will be in investment potential – Tamedia has identified Doodle as it’s growth machine for an international, global positioning."

This means that Tamedia will be investing finances to improve certain Doodle products and services. Brecht said that BookMe, the company's B2B2C solution offered to small to medium-sized firms, is of particular interest and has been "identified as a major investment area for us to enter that market".

Currently, Doodle's free scheduling service is going strong in its home market of Switzerland. Though it is relatively popular in Germany, France and English-speaking markets such as the US and UK, Brecht also sees a lot of potential in these markets.

As for the coming months, Doodle will be focusing on improving the BookMe product and working on a redesign. Rolling out a number of new features won't be a priority though, said Brecht.

"We’ll always focus on being a lean and clean scheduling service – not too many fancy features."

With 20 million users and a new CEO, Doodle wants to be the global leader of online scheduling
Comments
Follow the developments in the technology world. What would you like us to deliver to you?
All