Think about the number of times you turn to Google each day.

And even if you’re not clicking on ads, other people definitely are.

Google’s total advertising revenues rose to $14.07 billion in the last quarter of 2013 – which is about a 17% increase compared to the same period a year earlier – with total clicks on the company’s search advertisements increasing 31%.

Now think about if Google somehow converted even a small portion of this $14.07 billion total advertising income to planting trees to restore a tropical forest... Can you imagine?

Founded in 2009 by Christian Kroll (below), Ecosia is a search engine that donates 80% of what its earns from advertisements to planting trees. Currently, its aim is to plant one million new trees in Brazil’s Atlantic Forest through its partnership with US environmental charity organization The Nature Conservancy (TNC) - by next August. 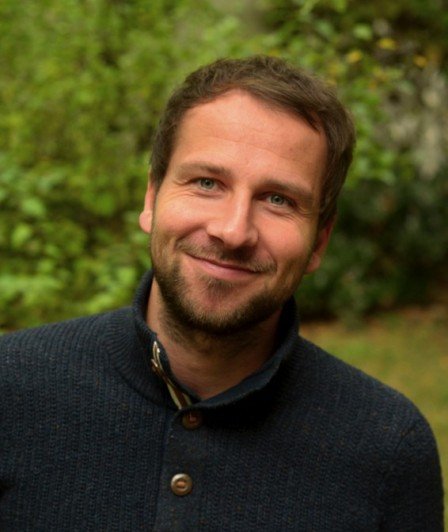 Because skepticism isn't uncommon when companies claim to funnel funds to good causes, Ecosia publishes its donation statements online as an attempt to maintain full transparency.

Since Ecosia’s founding, the search engine has raised over $1.5 million for rainforest protection. Previously, it worked with the World Wide Fund for Nature (WWF) to support a rainforest project in the Amazon.

The other 20% of Ecosia’s income is claimed to be used to neutralize the CO2 emissions of its web search as well as maintain the company operations and growth.

Recently, the Berlin-based social business added serial entrepreneur Tim Schumacher (known for co-founding domain marketplace Sedo) as co-owner of the company, and also attained B Corporation certification, which is issued to for-profit companies that meet rigorous standards of social and environmental performance, accountability and transparency.

With B Corp status, Ecosia joins the likes of online eyewear company Warby Parker (which distributes a pair of glasses to someone in need with every pair sold) and outdoor apparel company Patagonia (a major contributor to environmental groups) amongst others.

Following the Ecosia’s latest series of announcements, I dropped by the startup’s newly renovated office in Berlin to learn more about where the idea came from, how the search engine works and what to expect in the future.

How it all started

The idea for Ecosia began gestating in 2008 after Kroll finished university and was traveling the world as a way to escape working at a “big, evil company”.

Eventually, his interest in search engines heightened and, by chance, Kroll stumbled across Thomas Friedman’s book Hot, Flat and Crowded – where he learned that the carbon released into the atmosphere from cutting and clearing out tropical rainforests accounted for roughly 17% of all global emissions contributing to climate change.

“I was completely not aware of that. I had a totally non-sustainable background and studied business administration so was very blind in that area. Then, I thought, if it’s that bad we might really have to do something,” he recalled. “So one day the idea came up: 'Hey, I could build a search engine that helps the rainforest.'”

Kroll launched the predecessor to Ecosia, dubbed Forestle, in partnership with Google but the search juggernaut cancelled the deal only days afterwards. At the moment, Ecosia is predominately powered by Yahoo but uses third-party search technologies such as Bing and Wikipedia. 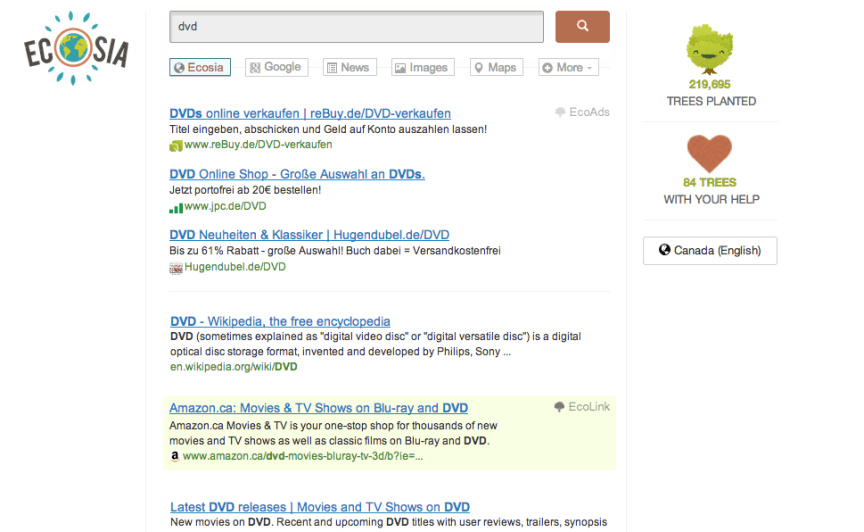 These two components make up Ecosia’s advertising scheme and are the company’s main sources of income. At the moment, it generates approximately 2,000 euros ($2,770) per day from this.

EcoAds are text links to businesses that pay for each click by users and are delivered by Yahoo, which pays Ecosia a fixed portion of the revenue generated from them. Though you may be tempted to support tree planting by randomly clicking ads – the startup has a few words about that:

Thanks, but don't do it. You should only click on search ads in which you are genuinely interested: arbitrary clicks could harm the advertiser and possibly even Ecosia. There are also algorithms active, which are designed to detect fake clicks and invalidate them.

Rather than pay-per-click, EcoLinks help Ecosia earn money every time a user performs an action on the advertiser’s site – whether that be purchasing an item or registering for an account – and receives a share of the revenue that is generated.

Kroll told us that currently Ecosia receives 550,000 searches a day, which is a small fraction compared to Google’s roughly 3.3 billion searches per day.

Despite Google’s dominating position in the market, Kroll was optimistic that the startup could potentially take “two, three, four, or 10 percent” of its share eventually.

But if the German startup is really serious about gaining market share, then user experience needs to be high on the priority list.

A ways to go

At the moment, Ecosia’s site is available in five languages. However, on my first attempt at using the search engine, I already ran into trouble figuring out how to switch languages. Not only that, I didn’t realize how enjoyable Google’s search experience was until I began using Ecosia...

To be fair, Google has had roughly 15 years to hone in on the usability of its search service and Ecosia is aware that its user experience needs to be improved – Kroll told me that the team is currently working on a “complete update of the search site".

“It’s really hard to measure search experience, but I have a feeling it’s going to be a big jump in in the positive direction. We’ve made updates in the past that have went into the other direction,” he admitted honestly.

The great thing about Ecosia, in addition to the serene landing page, is its personalized tree counter, which is displayed on the right hand side of the page when you do a search. Illustrating the number of trees you’ve helped to plant – based on TNC’s Plant a Billion Trees program’s calculation of the one US dollar per planted tree – is a good way to visualize impact as well as provide incentive to continue using the site.

However, reliability will also be a key issue for the burgeoning search engine. A couple of weeks after using Ecosia for the first time, I was doing some research on the site and the search engine was down for about half an hour. In a time when users expect results instantly, half an hour feels like eternity.

Last year, when most of Google’s services – including search – was down for only a few minutes, analytics firm GoSquared reported a 40% drop in global traffic during that window. 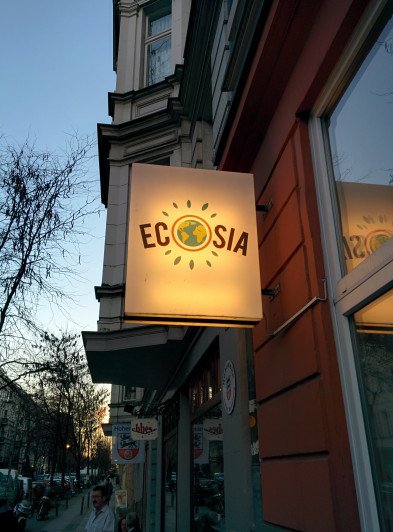 Ecosia’s mission is undoubtedly laudable, but it’s not the only one in the green search sector.

The likes of Envirosearch, EcoSearch, and GoodSearch operate similarly to Ecosia and attempt to convert sponsored links into revenue for environmental initiatives. Also in this space are networked search engines such as Green Maven, which only display environmentally aware websites.

However, even if Ecosia’s user friendliness and results may not (yet) be on par with Google’s, the startup’s design is still a step up from most of its competitors...

And although Google doesn’t donate a percentage of its ad revenue to environmental projects, the search giant has its share of green initiatives, which include big investments in renewable energy.

Interestingly, except for a small injection of around 10,000 to 20,000 euros of Kroll’s own money, Ecosia hasn’t received any external funding since its launch in 2009.

He added that this aspect can be seen as a competitive advantage compared to players such as Google.

“Google is a company that trades on the stock market, so they have financial pressure – we don’t have that... Whereas other companies have quarterly results to present, we can really put ‘doing good’ as our focus, which is a definite advantage for us,” Kroll posited.

So does Ecosia ever plan on receiving any funding?

“Hopefully we can self-sustain ourselves. We’re fine at the moment and I’m a big fan of bootstrapping, so as long as we don’t see the need of getting funding then I don’t know why we should,” Kroll responded. “But, if someone is knocking on our door and presenting us with a good opportunity, then we’ll definitely consider – but it has to match with our values.”

The goal: To help plant one tree every second 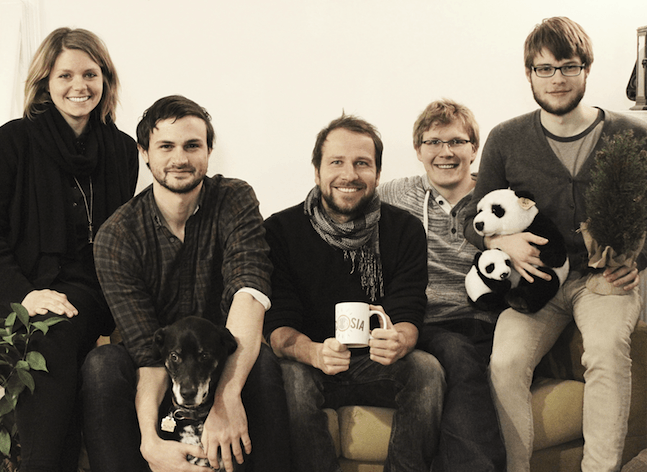 At the moment, Ecosia is an international team of seven full-time employees hailing from Germany, the US, Tunisia, Canada and Poland. Right now, Kroll said the company is helping to plant a tree every 26 seconds.

So what does the company have planned for the coming months?

After the goal to plant one million trees in Brazil's rainforest culminates in August, Ecosia will be choosing another initiative to support, said Kroll.

In addition to improving the user experience, he said the company is developing an ambassador program.

“We have a lot of engaged users who ask, ‘What can we do to help you?’ and we don’t have any infrastructure for that at the moment,” he said. “Now we’re building up a kind of social network for ambassadors so they can meet, exchange ideas and download resources they need in order to help us promote the idea, because we’re not spending money on that. We depend a lot on word of mouth.”

On that note, it's a good thing renowned Canadian writer and environmental activist Margaret Atwood has already expressed support of the platform on Twitter.

"For us, it's really important to be a data-driven startup that measures the amount of good we can do," said Kroll. "We want to improve that amount of good, as much as possible. Of course, the more users we have, the better. We don’t have big five year plans right now, but I think what’s most important to us is to plant as many trees as possible."

A spotlight on Ecosia – the search engine that helps plant one tree every 26 seconds
Comments
Follow the developments in the technology world. What would you like us to deliver to you?
All

NEXT
Candy Crush Saga maker King dominates in total time spent (26%) on Android gaming in the US: Strategy Analytics
According to the most recent data from Strategy…
Robin Wauters