Seriously, Do Not Track: Adblock Plus gives Facebook users a way to block its extended tracking efforts

Facebook recently announced that it would bolster its ad targeting efforts by expanding the way it tracks users and their data.

The company opted to ignore the Do Not Track setting on Web browsers, which lets users indicate that they do not, in fact, wish to be tracked. It wasn't much of a surprising move for Facebook to make (other Internet behemoths, including Google and Yahoo, have publicly confirmed that they also ignore Do Not Track) but a controversial one nonetheless, given the social network's vast global reach and scale.

Following the announcement, a Facebook spokesman told AdAge that it is ignoring Do Not Track "because currently there is no industry consensus" - which is actually a fair point to make.

But that doesn't mean there aren't ways to stop Facebook from tracking your Web history and general browsing behaviour so it can serve you 'better ads'.

Enter Cologne, Germany-based Eyeo, the company behind Adblock Plus, the super-popular 'annoying ad blocker'. In a blog post published yesterday, the Adblock Plus team pointed out how its tool can be used to disable Facebook's social media button (and almost 6,800 other trackers to boot). 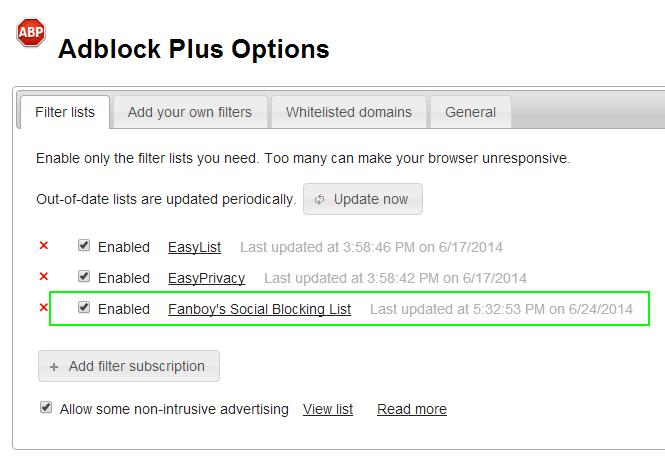 Adblock Plus says Facebook offers users a way to opt out of tracking, but deems it 'predictably contentious', circuitous and temporary by design. For those looking to block Facebook from peering into their Web browsing habits, it offers a simple and permanent alternative, Adblock Plus says.

“Facebook’s blatant move against fair-minded Internet users simply cannot be tolerated so we’re trying to make sure users of Adblock Plus who also might be a Facebook user understand how to block the tracking efforts of this behemoth,” said Till Faida, co-founder of Adblock Plus.

“This is simply a way for Facebook to make more money at the expense of users around the world. We’re not going to stand by passively.”

Adblock Plus also offers Facebook users a way to remove other 'annoyances'.

Like the idea of FB tracking you? Yeah, that's what we thought. Here is a way out: https://t.co/VQODuPZwo1 pic.twitter.com/eMx34aX8Ed

Seriously, Do Not Track: Adblock Plus gives Facebook users a way to block its extended tracking efforts
Comments 8
Follow the developments in the technology world. What would you like us to deliver to you?
All