A look at the state of entrepreneurship in Spain, Southern Europe and Latin America

Organizers behind tech conference The South Summit have released a report on startups in Spain, Southern Europe and Latin America offering a glimpse into the state of entrepreneurship in the region.
Alex Barrera 21 July 2014
Share
Facebook Twitter Linkedin

Disclosure: The South Summit is a client of Press42, a company owned by tech.eu co-founder Alex Barrera.

The South Summit, a tech conference focusing on startup happenings in Southern Europe, just released a report on the current state of entrepreneurship in the region.

The conference, which has been running for three years now, was first focused on the Spanish ecosystem but is now opening its doors to the rest of Southern Europe and Latin America (LatAm).

Based on the analysis of The South Summit's most recent startup competition, which attracted nearly 3000 entrepreneurial projects from across Spain as well as several Latin American and Southern European countries, Spain Startup – the organization behind the tech conference – has released a report on its findings... 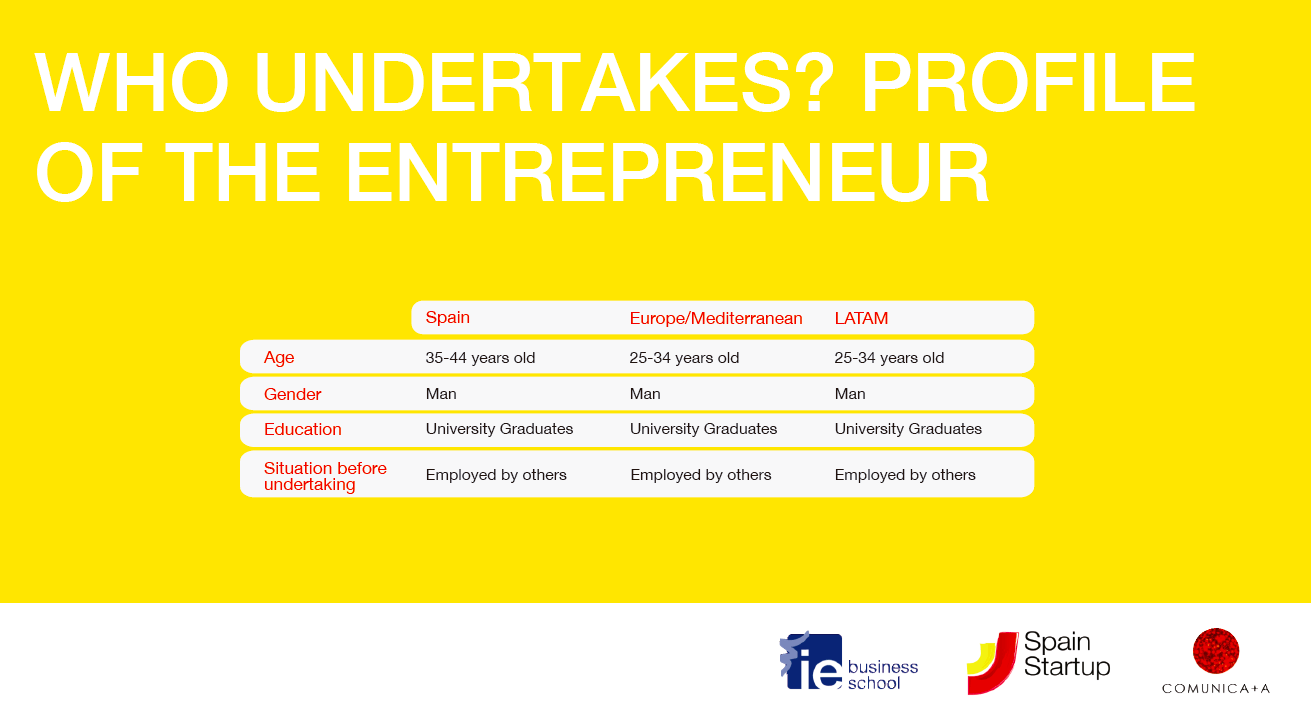 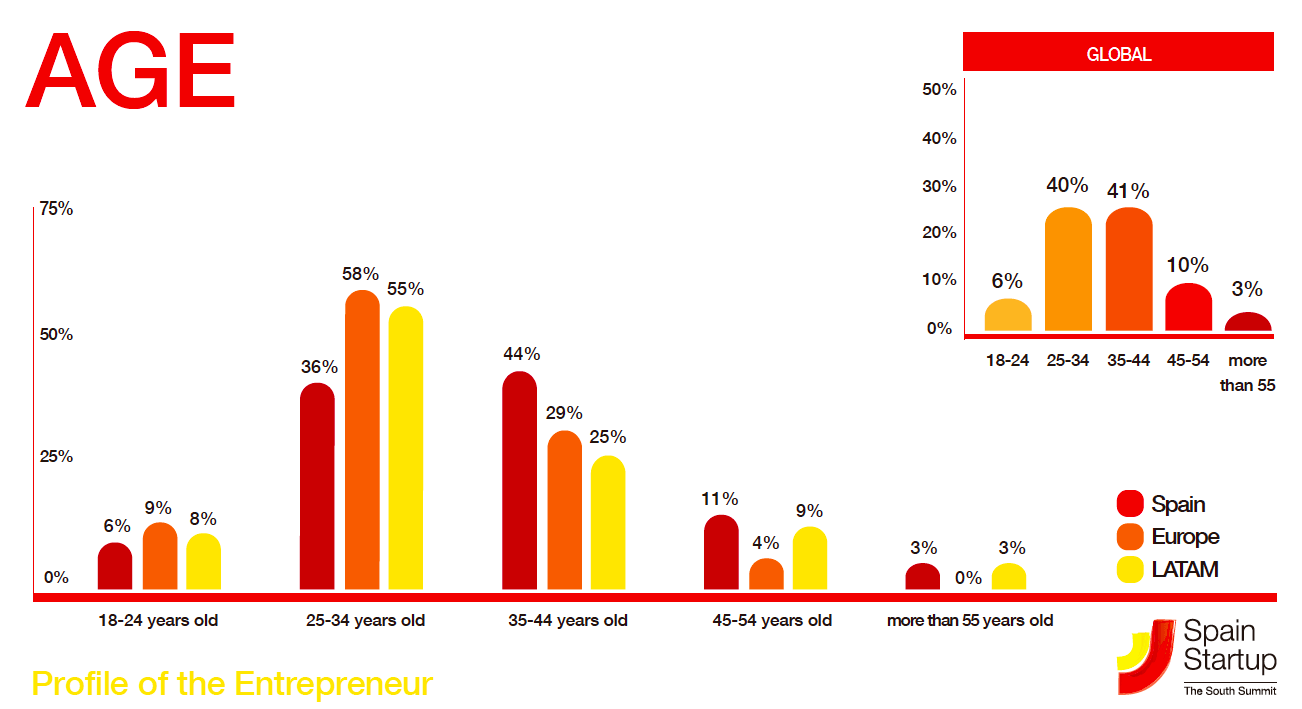 One of the first things that stand out in the report is the average age of entrepreneurs.

In Southern Europe and LatAm, the proportion of entrepreneurs in the 25 to 34-year-old age range seems to be standard. If anything, the region has slightly older entrepreneurs compared to places such as Silicon Valley.

Spain, on the other hand, shows a deviation from this and skews towards an older group of entrepreneurs. With the current rate of unemployment in Spain at 25.1% and youth unemployment (people under 25-years-old) at 54%, it's interesting to see an older population embracing entrepreneurship.

The costs of starting up in Spain are pretty steep though, especially if we factor in red tape, taxes and social security. Even with the recent entrepreneurial law passed by the government, expenses are still high compared to other regions in Europe.

This might be one of the reason why it's impractical for many young entrepreneurs to start anything by themselves and why the average age is higher. Another thing we can't forget: the negative image entrepreneurs still have in current Spanish society or the impact of social networks on Generation Y's perceptions. 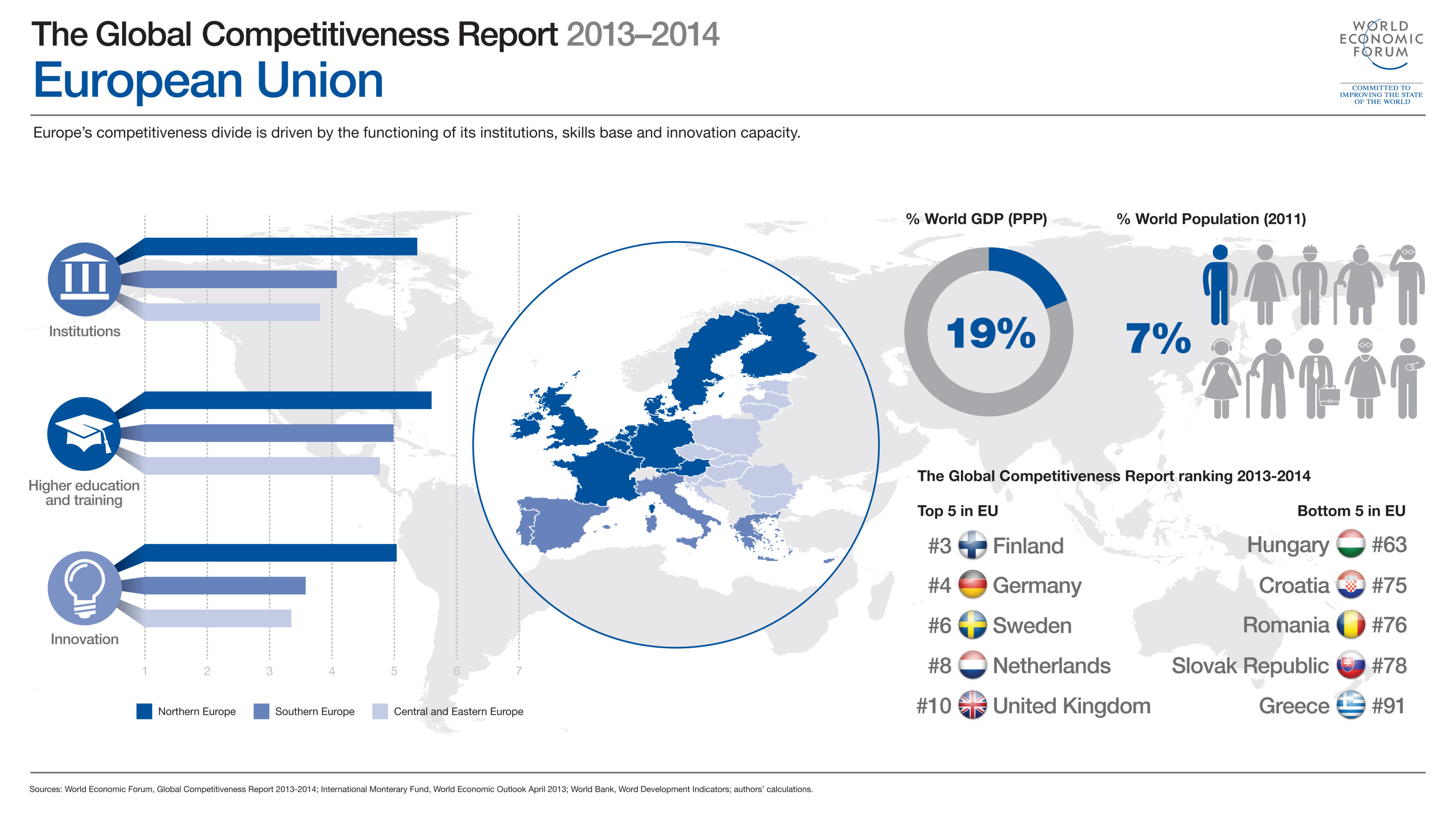 When it comes to gender, the region is still lagging in this respect in terms of equal representation. The entrepreneurship field is still widely dominated by men, something tech.eu has discussed in-depth before.  It's interesting to see how the ratio in the report mimics the Gender Gap Index values we plotted in our women in technology piece. 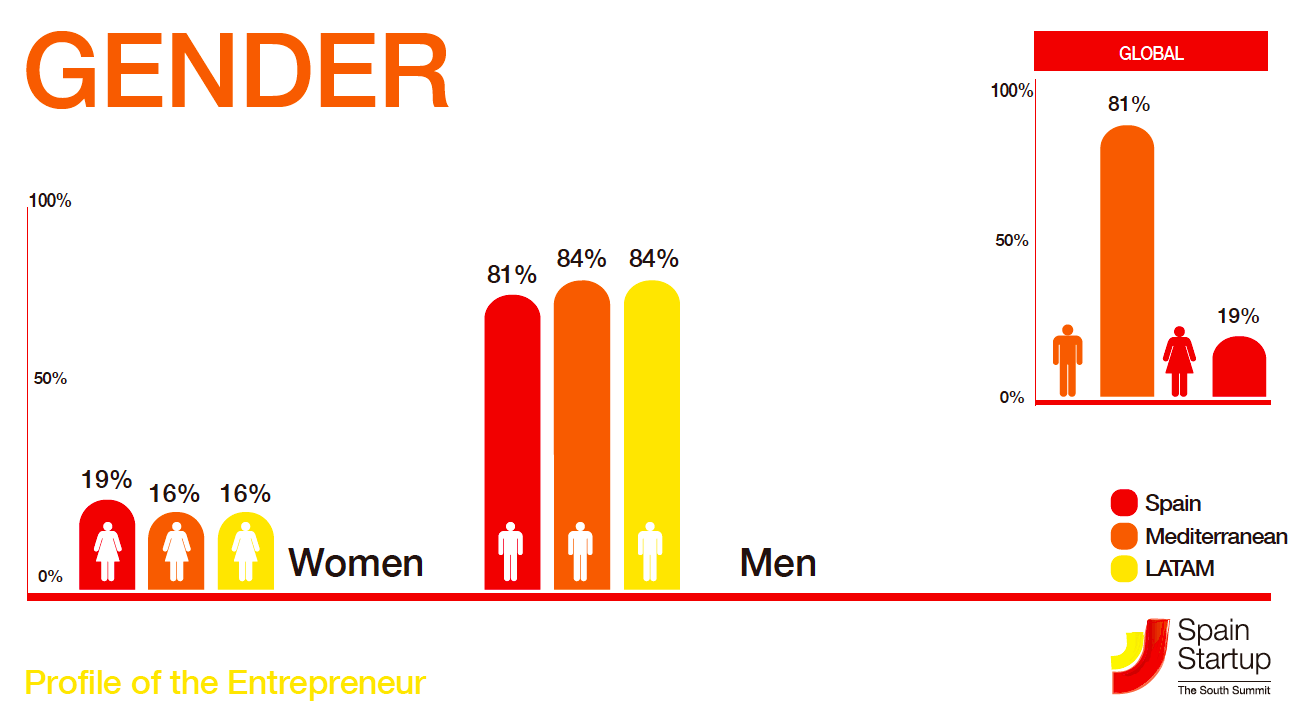 On the educational front, there aren't many surprises. The large majority of entrepreneurs have tertiary education and only a small percentage of them would be considered 'drop-outs'.

It's interesting to note though that in LatAm, very few entrepreneurs are without a university degree. However, this observation could be due to the social context of The South Summit startup competition, which may be more accessible to highly educated entrepreneurs from the region. 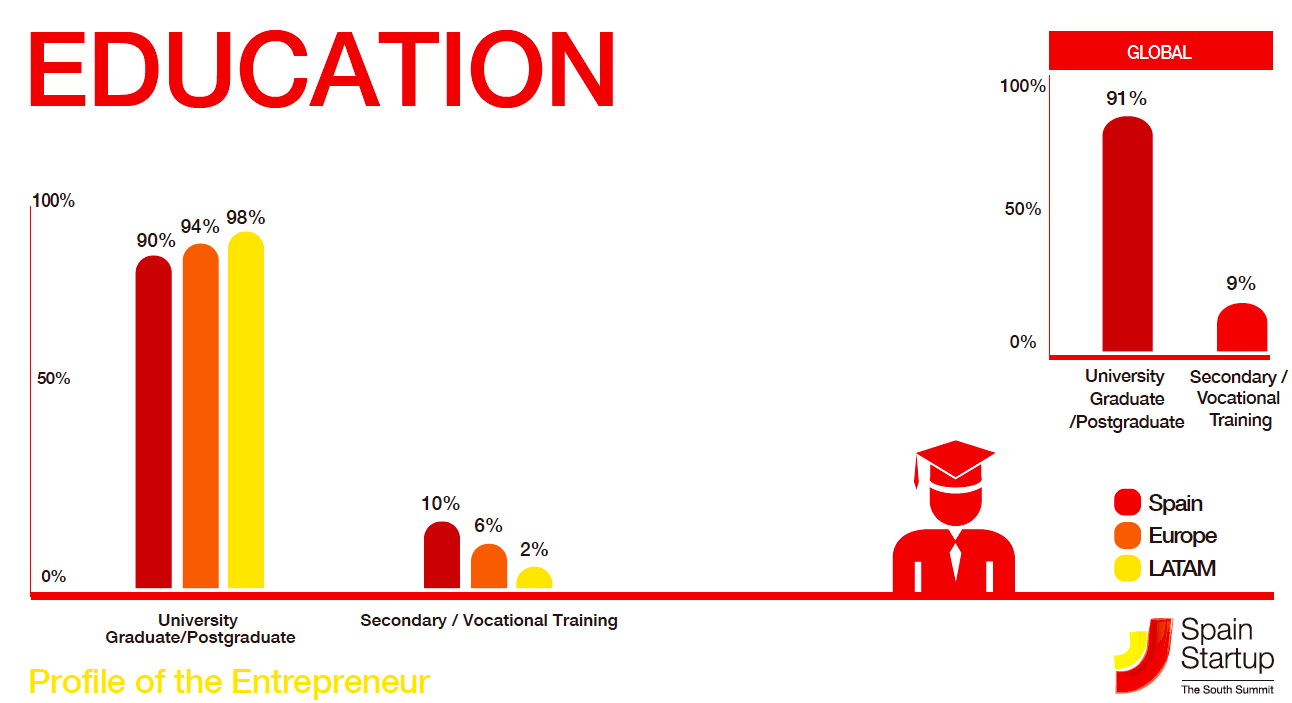 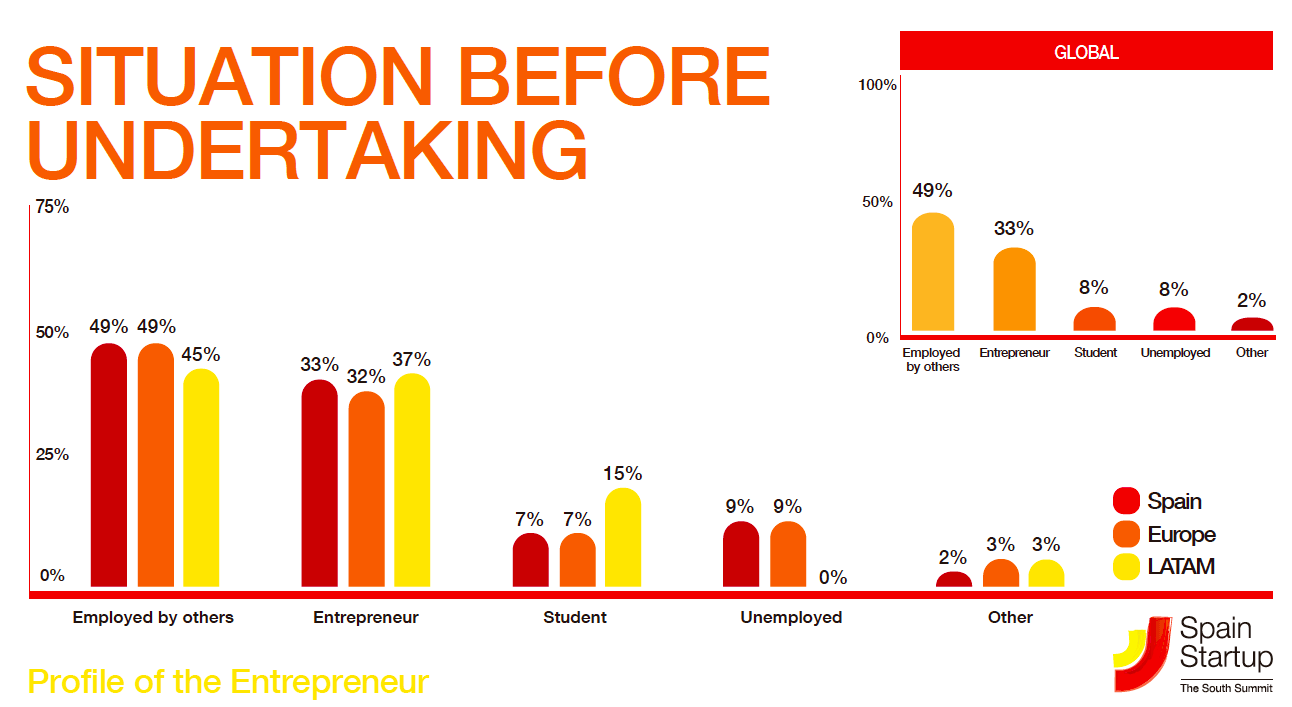 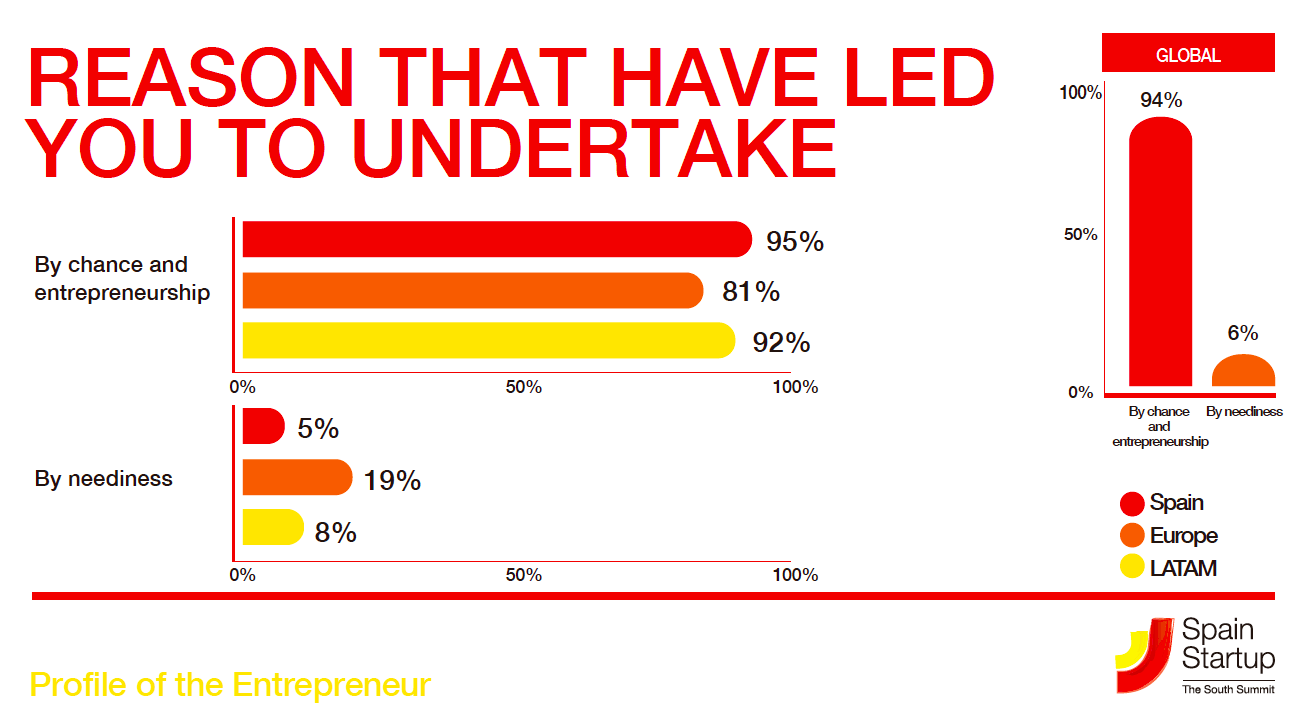 There is a subtle but important distinction between people who are unemployed and decide to start up out of neediness and people that may be either tired of their current job or on the verge of being fired due to company restructuring. According to the report (and chart above), 94% of entrepreneurs belonged to the second category and supported the idea of the labor force transforming into a Freelance Nation.

The differences in results for reasons that have led to entrepreneurs undertaking a business between Spain and the rest of Southern Europe are also important. On one hand, it shows that the entrepreneurial state of Spain may not be as bad as previously reported.

However, the difference also could highlight something different entirely – namely, a lack of honesty by many Spaniards to admit they're doing it out of need. Additionally, it could be a reflection of the negative perception of entrepreneurship in the country, but again, it's hard to say with the given data. 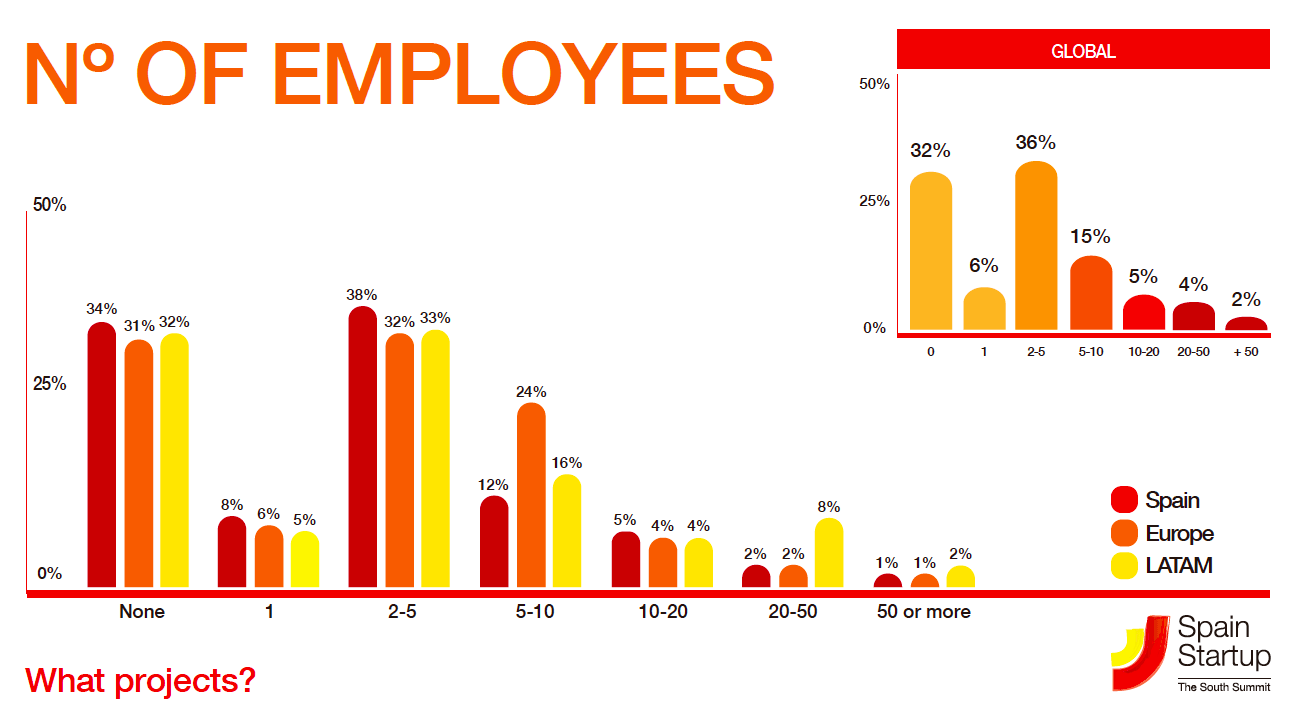 Most startups are either a one-person show or smaller than five people. The first case is what many define as self-employment startups, or as we mentioned before, part of the Freelance Nation.

In the case of a startup with more than five employees, the difference between Southern Europe and Spain is stark. This might indicate a lack of capital during growth or simply a lack of ambition of most Spanish startups, but it's an interesting anomaly. 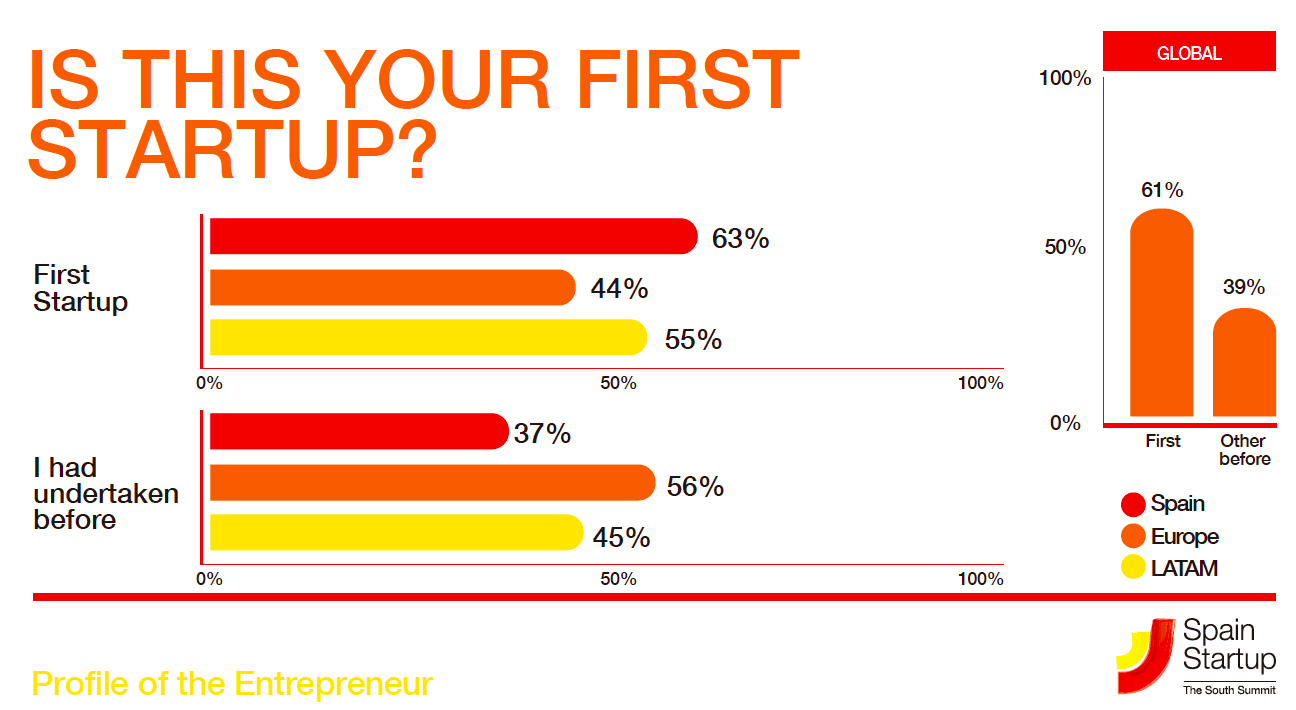 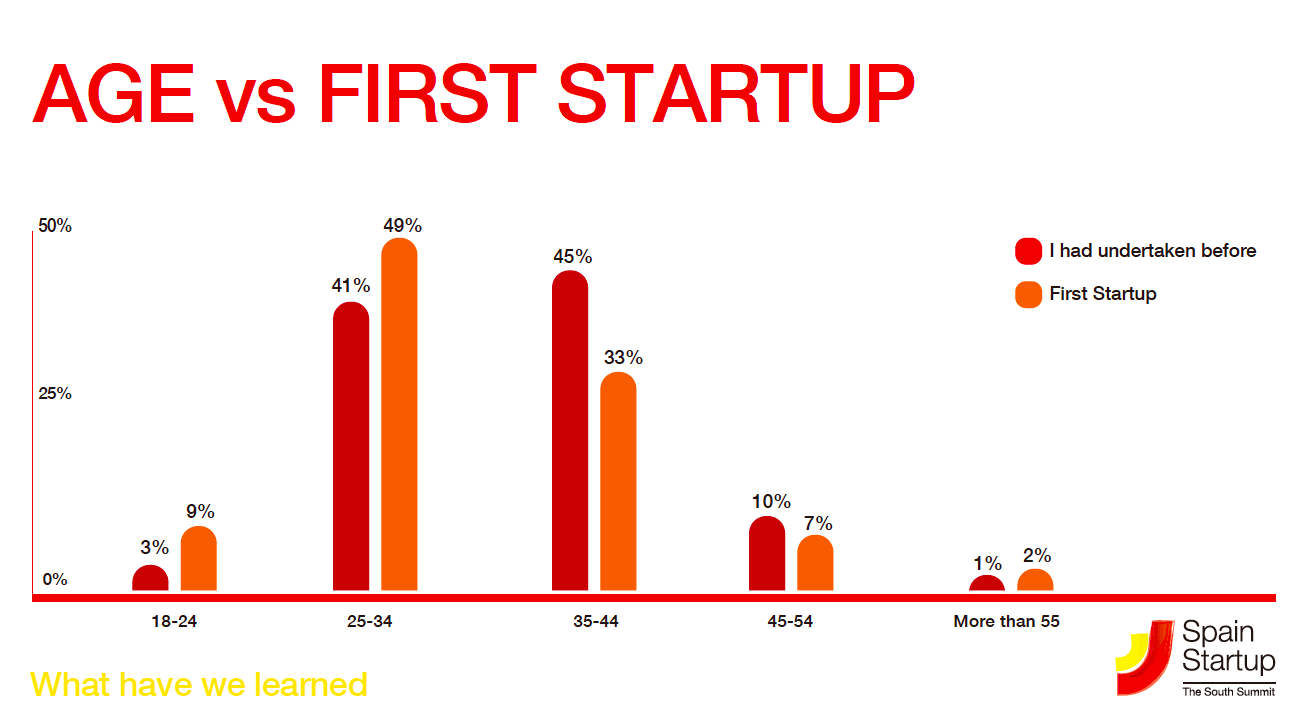 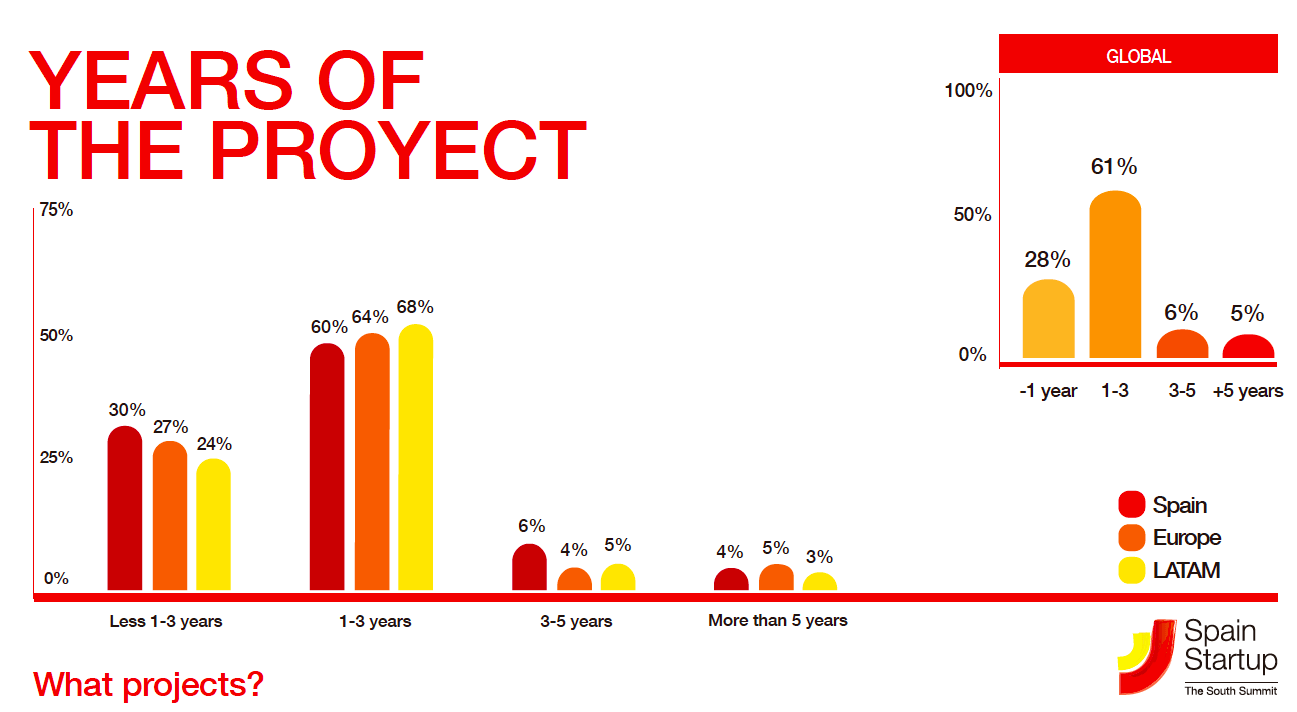 Spain has a relatively nascent entrepreneurial scene when compared to the rest of the Mediterranean region and even LatAm.

Overall, first-time entrepreneurs are on the rise across the spectrum and this is clear when looking at the average age of startups globally, where 61% of entrepreneurial projects fell into the range of one to three-years-old.

Most startups seem to die within the one to three-year range, which could indicate that entrepreneurs are struggling all the way to the three-year mark instead of killing the companies early on and failing fast. Keep in mind though that while the sample from the report included early and late-stage startups, most of the entrepreneurial projects were indeed early-stage. 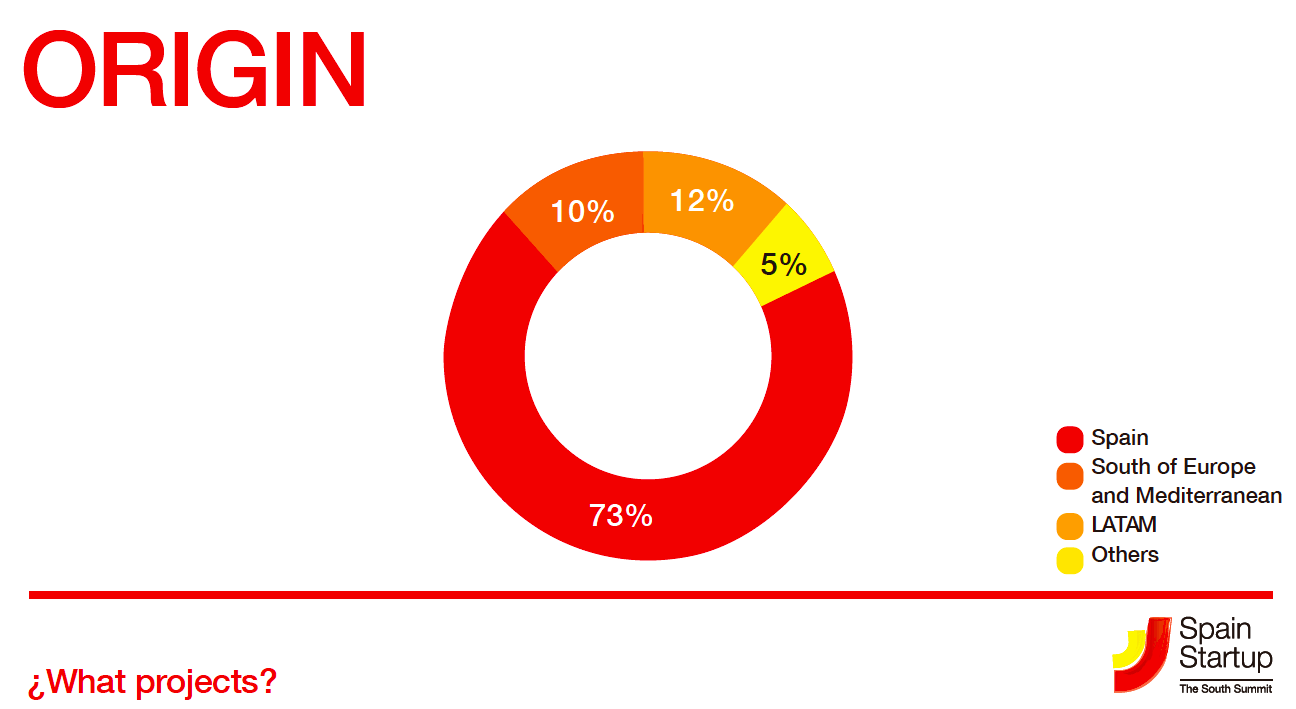 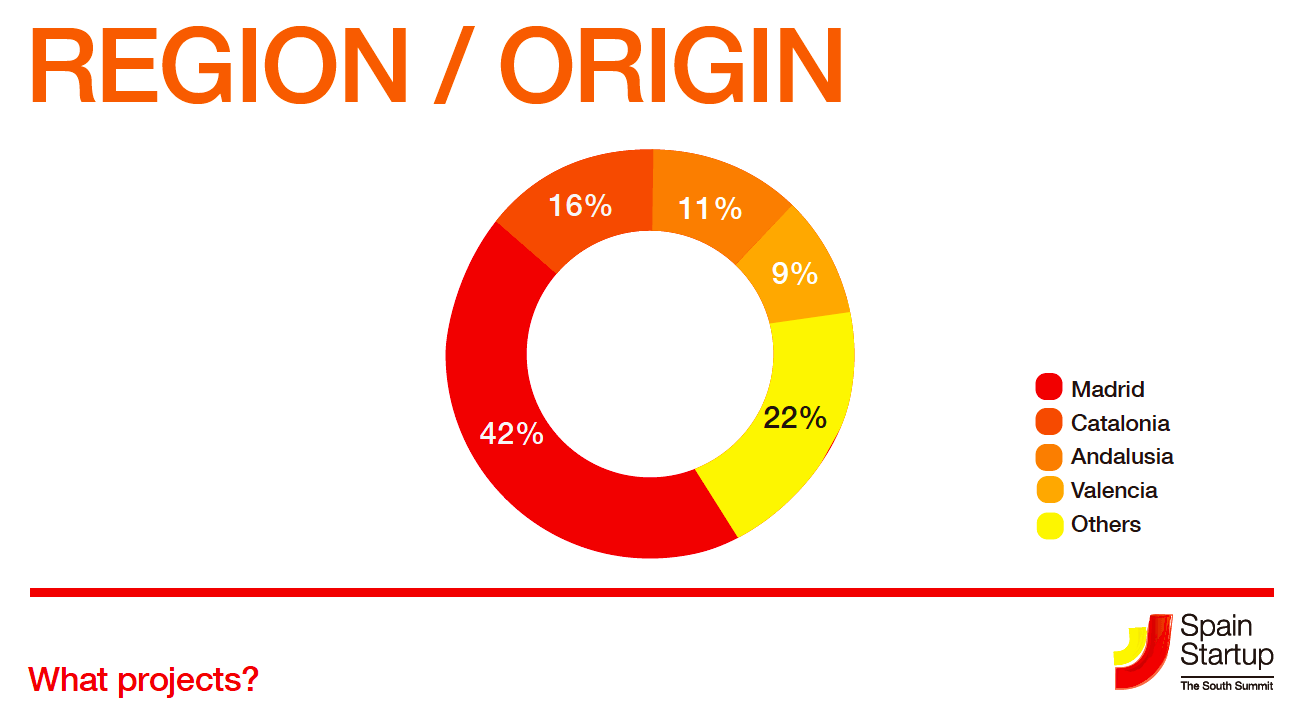 The previous charts on region and origin illustrate some of the most surprising findings from the report. Due to the Spanish origin and influence of the conference, it's normal to see such a large percentage of applications coming from Spain.

That said, after touring Southern Europe for three months, it's hard to see that Southern Europeans still have a very local mentality. Most of them aren't willing to hop on a plane outside of their country as the data suggests.

The most interesting part of it is that LatAm is slightly more willing (10% vs 12%) to jump at the opportunity of setting foot in the European market than our own entrepreneurs. It's early to say, but this could be the beginning of a trend as the LatAm startup ecosystems matures.

Within Spain, there's no surprises with Madrid and Catalonia leading the chart of areas of origin for entrepreneurial projects. However, a big surprise with Andalusia topping Valencia in number of startup applications. Both regions were visited by The South Summit team with large audiences, so the initial conditions were similar. 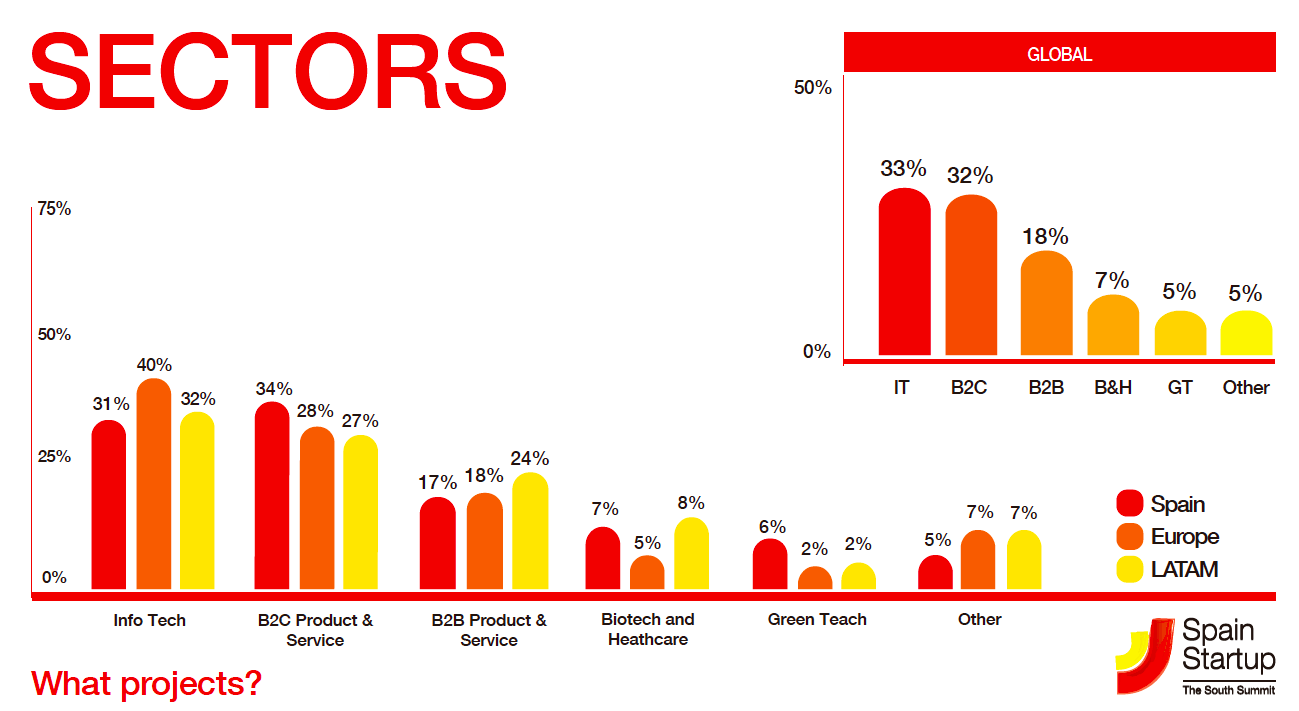 In terms of industry sectors, ICT rules the bunch, followed by B2C and B2B. Spain keeps a good portion of BioTech and GreenTech when compared to the rest of regions. It's important to note that Spain is becoming one of the leading European countries in both categories and is already seeing its first exits in the space. 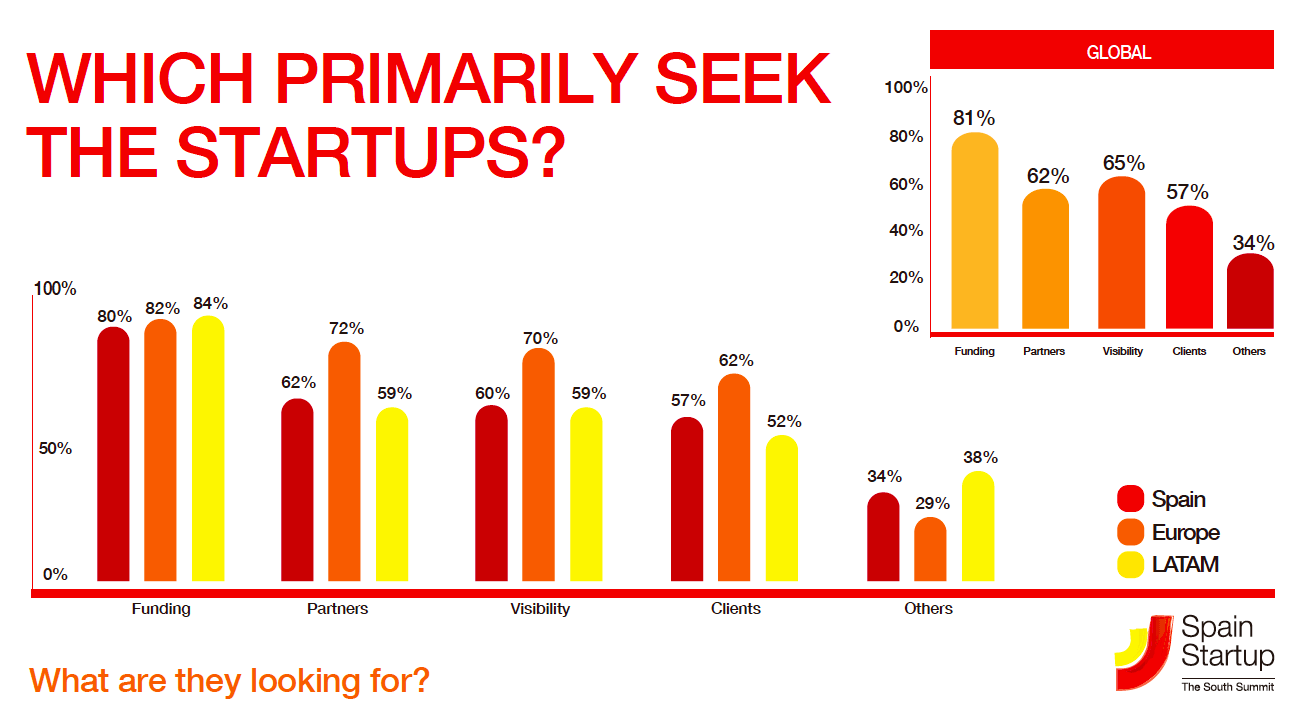 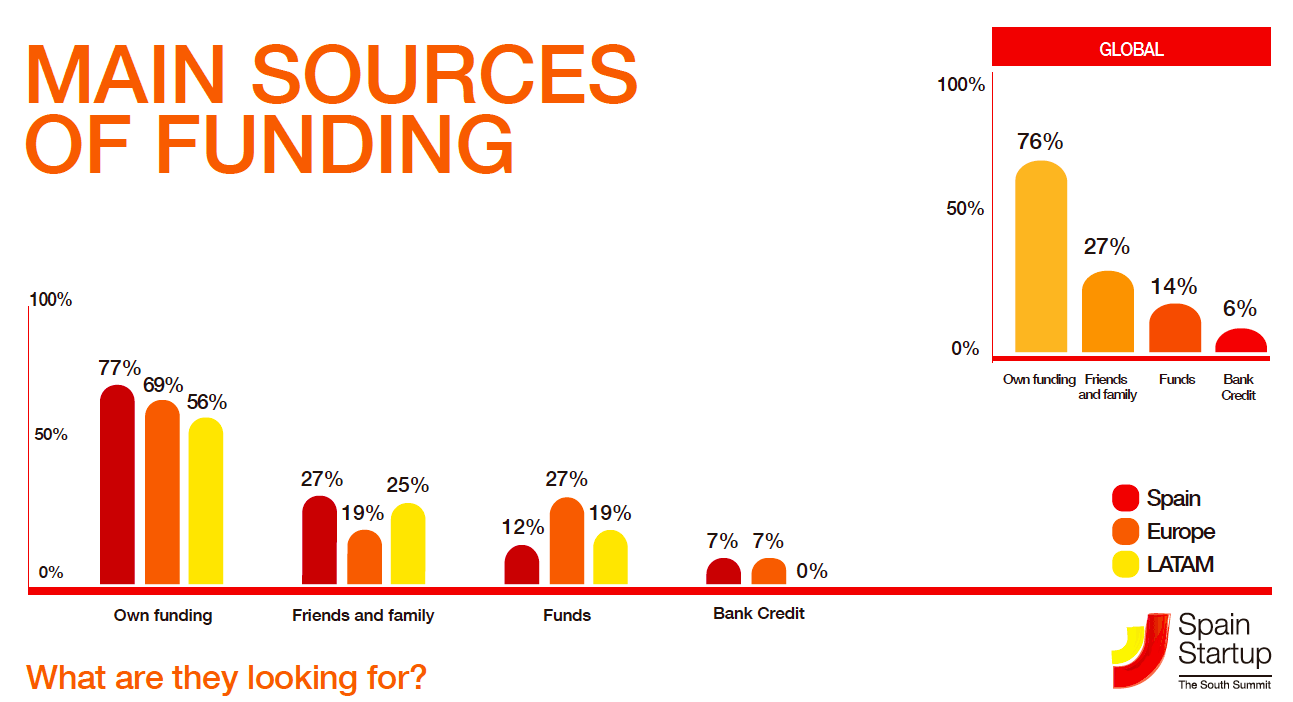 In the startup wish list section, we can see that Spain is still a money-hungry country. Not so for the rest of Southern Europe, where entrepreneurs lean towards seeking partners, visibility and customers. It's pretty interesting to see the Spanish startup bubble so well-reflected in the previous charts, which shows funding is the first need but customers are the last.

Most Spaniards are still funding their own projects, though. There could be many reasons for this, but as I've said before, one of the major reasons is that the projects aren't mature or competitive enough. With many Southern Europeans unwilling to travel abroad, it wouldn't be surprising if most projects were too narrow-minded for private investment.

I hope this situation will be different in the near future, especially after the capital investment FondIco is deploying in the country this year.

Nevertheless, it's important to keep in mind the relatively small sample size from the startup competition from which the data is drawn from. That said, we've also seen for ourselves many of the trends highlighted in the report while exploring the region and look forward to following entrepreneurial developments in the area.

A look at the state of entrepreneurship in Spain, Southern Europe and Latin America
Comments 2
Follow the developments in the technology world. What would you like us to deliver to you?
All

NEXT
Spotlight on Lisbon: on the banks of the Tagus and Portugal's Atlantic shores, a new generation of startups is coming into its own
After rolling through Spain and Portugal for…
Ivo Spigel