Today, the company is releasing Europe-specific data on 'email opens', based on an analysis of 8 billion unique emails sent by over 125,000 companies (including the likes of Uber, Spotify, Airbnb, Foursquare and Pinterest) over two 10-day periods in 2013 and 2014.

The data shows that device and platform adoption for email varies significantly across Europe, revealing a number of interesting trends.

For instance: in the UK, which SendGrid says is its largest European market by emails delivered, just under half (46 percent) of delivered email is opened on an iPhone.

The device's popularity for checking emails on the go is under attack, however ... from the iPad.

To wit, iPhone-opened email fell by 13 percent, while email opened on iPad grew by 55 percent. iPad now accounts for 18 percent of email opened in the UK, and its share continues to grow.

Also worth noting: Spanish, Germans and the French turn to iPhone more quickly than any other nationality for opening emails. The SendGrid data shows that email opened on iPhone has increased by a whopping 97 percent in Spain, 92 percent in Germany and 85 percent in France year-on-year, compared to global iPhone email open growth at 70 percent.

But, again, using tablet computers for opening emails is a growing trend across the board, particularly in Belgium (+87 percent), Germany (+85 percent) and the Netherlands (+80 percent). Globally, nearly 70 million SendGrid-delivered emails were opened on iPad in the past year, an increase of 65 percent on the company’s 2013 figures. Some stats specific to the EU5 countries: 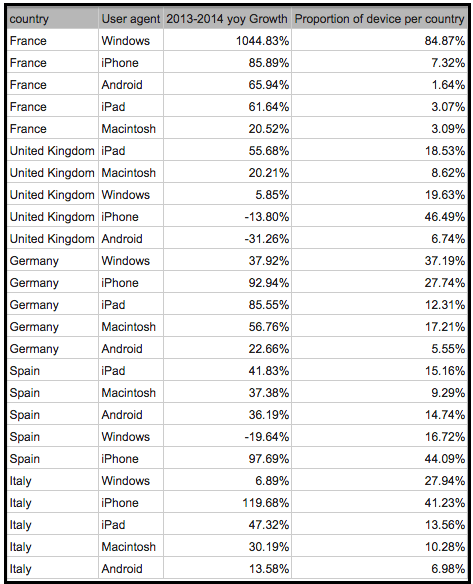 Android is slipping when it comes to email, at least in certain key European markets. In the UK, for instance, Android usage for email has dropped by as much as 31 percent in the past year.

This, however, contrasts with significant year-on-year increases in email opened on Android in Belgium (+89 percent), France (+65 percent) and Turkey (+54 percent).

Windows sees major gains in France and around the world, but Apple still dominates

Surprisingly (or not), Windows is surging in popularity in France, accounting for 85 percent of SendGrid-delivered emails opened in the country.

The data is difficult to distinguish from Windows 8 on desktops or laptops, but much of the growth is apparently due to the success of Windows 8 smartphones in France.

All in all, email opens on Windows have grown more than ten-fold in France over the past year, but it's not an anomaly per se. SendGrid's data suggests Windows-based devices are the fastest growing segment for email opens globally. In the last year, 320 million emails were opened on Windows devices, accounting for a 147 percent increase over the previous year.

Still, people continue to read more email on Apple-manufactured devices than any other device or platform. According to the study, Mac computers, iPhones and iPads were used to open 358 million SendGrid-delivered emails in the last year, compared to 320 million emails on Windows.

How Europeans email
Comments
Follow the developments in the technology world. What would you like us to deliver to you?
All

NEXT
Doing it the Rocket Internet way: an inside look at what it's like to build companies at lightning speed
Upon entering the glassy reception area of…
Charmaine Li