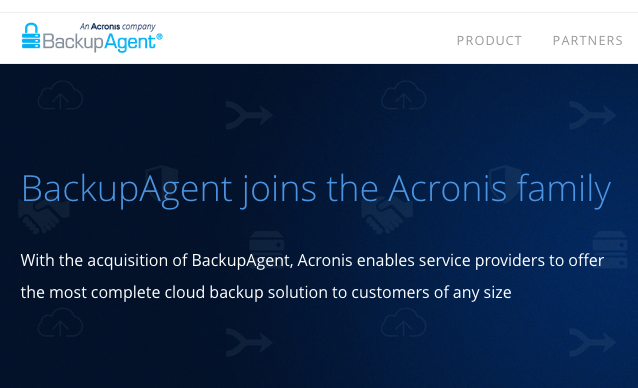 The Netherlands-based cloud backup software maker BackupAgent has been acquired by Acronis, a global provider of backup, disaster recovery and file sharing solutions.

Financial terms of the acquisition remain undisclosed, but BackupAgent picked up $2 million in a second round of funding last year from initial backer Solid Ventures and new investor Runa Capital.

Interestingly, one of Runa Capital's founding partners is Serguei Beloussov, who also happens to be the founder, CEO and chairman of the board of Acronis. Keeping things in the family, in other words.

In a statement, Acronis indicates that it intends to merge BackupAgent's technology with Acronis AnyData Engine over time. BackupAgent's datacenters will join the Acronis global network of datacenters covering the US, Western and Eastern Europe, Asia and Japan.

BackupAgent was initially founded in 2005, specifically targeting professional service providers for sales of its (now fairly commoditized) cloud backup solutions. The company operated its own data centers but also has 'cloud datacenters' located in the United States, Europe and Asia.

Since its founding, BackupAgent managed to build a customer base of over 900 service providers (up from 400 in March 2013), which Acronis was keen on taking over.

At present, Acronis provides backup solutions for a range of environments, boasting more than 5 million individual users and more than 300,000 organizations as its customers.

Acronis buys Dutch cloud backup software firm BackupAgent; terms undisclosed
Comments
Follow the developments in the technology world. What would you like us to deliver to you?
All

NEXT
Rovio CEO Mikael Hed to step down by the end of the year, CMO Pekka Rantala to take over the reins
Angry Birds creator Rovio Entertainment today…
Robin Wauters