Startup Spotlight: Blinkist summarises books so you don't have to read the whole thing

As part of our weekly Startup Spotlight series, in which we feature interesting but mostly below-the-radar European startups, here’s a Q&A with Blinkist co-founder and CEO Holger Seim.
Charmaine Li 08 May 2015
Share
Facebook Twitter Linkedin

Today, we shine a light on Blinkist, a Berlin-based startup that breaks entire books down into summaries, enabling people to get the key insights in under 15 minutes (by reading or listening). Obviously, this only works for non-fiction, but Blinkist already offers summaries for hundreds of books.

tech.eu: How would you best describe Blinkist and its vision?

Holger Seim: Blinkist is a mobile app that takes high-quality nonfiction books and breaks them down into their most important messages, so that the key insights from entire books can be read or listened to in just 15 minutes. Books that we host include business books like "Freakonomics", or "The Lean Startup", biographies such as Obama's "The Audacity of Hope", and self-help books such as "How to Win Friends and Influence People”.

We now have over 600 books on the platform.

We aim to help people fit more reading and learning into their days by allowing them to read or listen to the most important points from non-fiction books on the go - while they’re waiting for the train or an appointment, in the middle of a workout, or getting groceries, for example.

In the future, we want to establish Blinkist as a global brand for lifelong learning by offering an array of content and apps that fit into our users’ daily routines.

When was Blinkist founded? Where did the idea come from?

Blinkist was founded in 2012 by myself and my co-founders, Sebastian Klein, Tobias Balling and Niklas Jansen. We came up with the idea for Blinkist when we joined the workforce and wanted to find a way to continue to read and learn, despite having significantly less time.

We realised that the majority of people were facing the same dilemma and lacked the time to sit down and read an entire book, plus were constantly being distracted by other media while they were using their digital devices. We decided we wanted to help people use the time they spent on their phones and tablets more meaningfully - and Blinkist was born. We started by putting together the key insights from a variety of popular nonfiction books that could be consumed in 15 minutes, so that people would have no excuse to make reading and learning a daily activity.

How does Blinkist generate its summaries?

Our writers, editors, and field experts read and analyse the book, extract the key insights, and polish the blinks until they’re not just smart, but also easy and enjoyable to read. For an extra layer of security, we review and fact-check every book in blinks.

Basically, our obsession with quality is our users’ insurance, and we work really hard on our blinks to give our readers something we (and they) can feel good about. By the time our blinks make it to them, we’re confident they’re getting the book’s most important messages in the clearest way possible.

How did you meet your co-founders and what were you (each) doing before starting the company?

I met my cofounders Niklas and Sebastian while we were studying together in Marburg. We actually founded a student consultancy during our time at university, which still exists and thrives. All three of us went straight into careers at big companies and consulting firms after we left university - I was at Deutsche Telekom, Niklas was at KPMG and Sebastian was at Boston Consulting Group.

However, the positive experience of founding our first company meant that we kept in touch and always had the idea of building a company together at the back of our minds.

We met our fourth cofounder, Tobias, when we were just getting started on Blinkist. His background founding online learning startup PodcastU meant he was the perfect choice to join Blinkist. 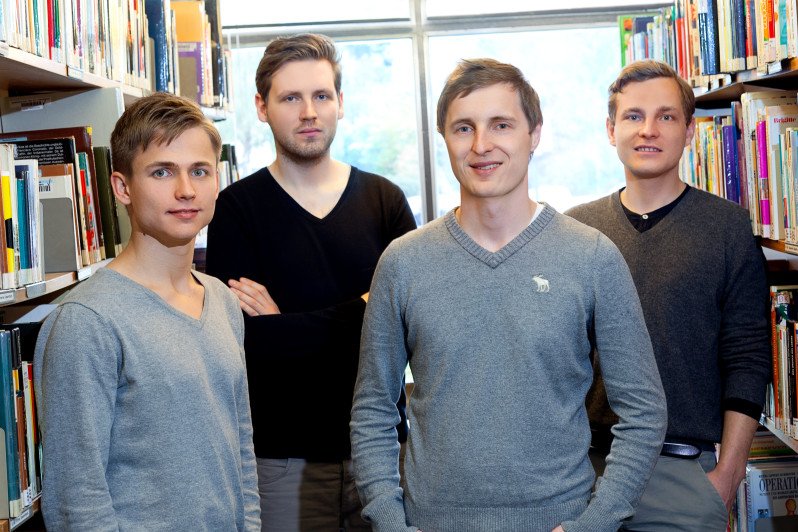 What is your business model?

We have a freemium model, whereby non-paying users have free access to one book per day that our team has selected. We offer two categories in our yearly subscriptions - Blinkist Plus, which provides users with unlimited access to all books hosted on Blinkist, and Blinkist Premium, which also offers audio recordings of books, Evernote sync and allows books to be sent to Kindle.

How much funding have you raised so far?

Can you share some current user numbers with us?

We just recently reached the mark of 300,000 users and are continuing to grow at a fast pace.

Recently, Blinkist rolled out a 'Holacracy' management system. Can you talk about what this means and how you stumbled across it?

As every startup which is growing from a small team of six people to a size of almost 20 employees, we were facing some organisational challenges at some point and hence, started looking for best practices to overcome them. This is when we first stumbled across Holacracy, an operating system for organisations which is based on the idea that you eliminate all hierarchies and job titles in organisations, and replace them with a formal structure that focuses fully on getting the job done.

Why did you decide to go the Holacracy route? How has it influenced the way you run your business?

Holacracy was the best choice for us to go forward because it was closely in line with where we wanted our company culture to go.

We always tried to give as much decision-making power to our employees because, ultimately, we hired them because they’re experts in a certain field and know more about it than we, as founders, do.

However, without the right structures in place, striving for decentralised decision-making included a lot of risks, such as not aligning with the overall company goals and needs and causing a lack of transparency on the interdependence of certain decisions. Holacracy was the structure that seemed most likely to help us to overcome these challenges.

Obviously, Holacracy has also changed the way we run our business a great deal. The system gives us more time to focus on strategic decisions and really “running” the business rather than being part of every decision on an operational level. It’s also given me, personally, more peace of mind as I know that everything is being taken care of and that potential problems will automatically come to the surface before they become big. This is because of Holacracy’s well-structured system of tactical and governance meetings within staff circles and the links between these circles.

What's the company's plan for the next three months? (expansion, adding markets/languages, new features?) And what do you hope achieve in the next 12 months?

There are two areas we are focusing on at the moment:

1. We’re preparing a major product update that will include a lot of great new features that our users have requested throughout the last year. The update will be launched in summer and will make it easier for our users to discover great content and organise what they’ve read in a better way.

2. We’re working on scaling our user base in our key markets (English and German markets) through various marketing channels.

In 12 months, we’re going to have a much stronger footprint in our key markets and aim to be a globally known and relevant brand for professional development.

Startup Spotlight: Blinkist summarises books so you don't have to read the whole thing
Comments
Follow the developments in the technology world. What would you like us to deliver to you?
All