After Neil's opinion piece about some of Web Summit's practices, the event organiser responded on its blog. In a way that triggered this response from us.
Robin Wauters 01 October 2015
Share
Facebook Twitter Linkedin

Yesterday, tech.eu's Neil Murray got up at 5AM in the morning itching to write an opinion piece (you're a blogger, or you aren't) on some of the Web Summit's practices after some relatively mild tweets about the conference in the past. In it, he explained why he won't be going to any of its future events.

Having edited and published his opinion piece, we both expected some response from the wider European tech community, but we didn't see this coming. Since the article was published, we have received a tiny bit of criticism - mainly centered around the fact that Neil has never attended any of Web Summit's even in person, which is a silly argument - with no one really disputing the facts.

What we've also received: heaps of emails, direct messages, Skype and Facebook IMs thanking us for 'exposing' Web Summit and sharing (off the record, of course) anecdotes based on personal experience from founders, investors and other folks.

But tonight, Web Summit responded to our post (though it remained unmentioned and unlinked) to 'set the record straight'. So, though conscious of the fact that this is nothing but drama for a lot of people, it's my duty as publisher and editor of tech.eu to respond in kind. 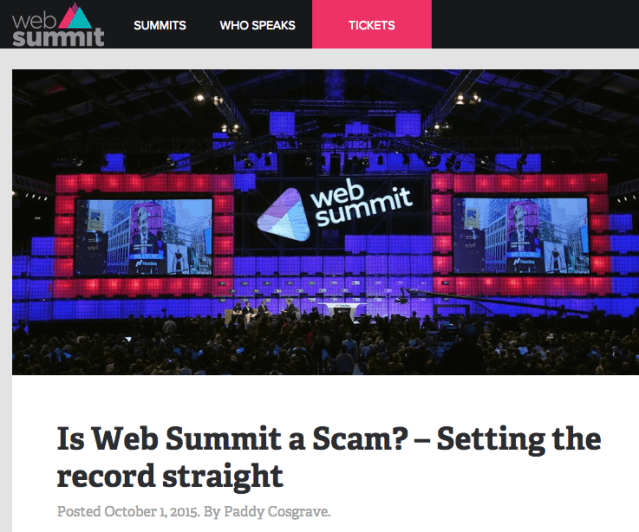 First off, I've always gotten along with Web Summit founders Paddy Cosgrave and Daire Hickey, and respect the fact that they've built a large conference business from humble beginnings. It's a very competitive space, and they've nailed many aspects of the business down to an art. I've attended multiple Web Summits in Dublin over the years, as well as most of the great F.ounders events that are organised on the fringes of the main conference. For the most part, I've enjoyed them, although the Web Summit has gotten too big for me to get a lot out of value out of it, personally.

So let this be clear: I have no axe to grind with anyone on the Web Summit team, and we're not 'attacking' them with an agenda, as some have ignorantly implied. We're not in the conference business, and likely never will be (that's not to say we won't do events, just that they'll be small and valuable, and not compete with Web Summit).

But (you know there was a 'but' coming) I've attended literally hundreds of conferences, summits, festivals and meetups over the past decade, in all corners of the world, and I have never received so many complaints about any organisation as vividly and frequently as the Web Summit. Every year, it seems to get worse.

I'm mindful of not exposing anyone who doesn't want to be named, and I actually think it is a shame that so many startup founders, investors, journalists, service providers and other previous attendees of the Web Summit have opted to tell me certain things in confidence and not willing to go on the record. Most are afraid, for whatever reason, to have their opinions out in public. That is evidently their prerogative.

We are not afraid. We are pro-startups and pro-entrepreneurs to the bone. We might get banned from all future Web Summits, but we don't care. What we do care about is our ethics and reputation. It's one thing to defend yourself, but it's another thing entirely to imply that we are opinionated about Web Summit because of some hidden agenda or association.

I'll say it loud and clear. Web Summit may be very proud of the fact that they don't hire event managers but data scientists and engineers, and that their conference business is run more by algorithms than human beings. I think that's the core of the problem.

Is Web Summit overly aggressive in its online marketing? Yes. Does that make it spam? I don't know. What I do know is that the advertisements they run, and a large part of the emails that they send, are straight-up deceptive, to say the least. That's worse than spam, and Web Summit has demonstrated that it's prepared to take things up a notch with every event.

Examples aplenty: from toying with the number of attendees from a certain country that have purportedly signed up to buy event tickets (which Neil pointed out in his post) to actually showing logos from startups who haven't registered - and some not even ever heard of - the Web Summit. That is downright misleading and unethical.

Worse is that I've witnessed Web Summit go out of its way to hide from startups that they will need to pay to attend. They are exceptionally good at making startup founders feel like they've 'won' something and that they've been 'selected' but all of them end up paying more than they should. The algorithms for that certainly work fantastically well.

No matter how much Web Summit tries to sugarcoat it, they are definitely and deliberately trying to capture founders' attention by purporting to give away exhibitor space for free (there are people commenting on Web Summit's blog post saying as much, too). They might make things clear later, but startups are definitely being tricked into the funnel. I would call out any company reverting to such tactics, because I find it despicable.

Paddy writes that he's 'proud to be a bootstrapped startup' - I say he should be ashamed about the way they've treated some truly bootstrapped startups. I think it's bullshit, and a disservice to fledging young companies with very little money and time to spare. If you're in the business of running startup events, you shouldn't be trying to milk them to improve your margins before the altar of exponential growth. Or at least be transparent about it.

Does it make Web Summit a scam? To many, clearly yes, also judging from our inboxes. I don't know if 'scam' is the right word. But there are plenty of people who've come forward to us to say they feel wronged by the organisation, and I will gladly tell any startup asking me whether Web Summit is worth going to or exhibiting at that is absolutely not, for the reasons I've cited above and many more.

In 2013, some startup founders desperately tried to get my attention in the main hall to highlight how little they received from Web Summit in terms of exposure after buying into exhibitor space at an (evidently) 'special discounted rate'. They were put in a separate room with hundreds of other attention-hungry startups, each receiving a small table and enough space to hang up their company logo on an A4 paper. Not a single investor or journalist dared enter that room, from what I can remember, and the real losers were of course the startups.

Since then (and not just in the past 24 hours), I've received complaints from organisations who've partnered with Web Summit, from companies who have sponsored their events, from startups that have exhibited, from journalists that have been invited to cover the content, from regular attendees. Heck, I've even heard my fair share of criticism from current and former Web Summit staffers (some of their feedback has been deeply worrying in fact).

And I didn't even specifically ask for any of it. At least, not yet.

If these people opt not to go public with their complaints out of fear, that is their choice and there's little I can do to change it. But I do want to urge people to share their personal experiences with us and the Web Summit team if they've been silently on the fence about it to date. We learned a long time ago that these complaints aren't just a few disgruntled people.

It is clearly a fairly large group, and they're invited to share their stories if they feel so inclined.

The Web Summit crew has every right (I'd say even a duty) to clarify its confusing pricing strategy, but it has no right implying that everyone is out to get them simply because they've been so successful. We don't wish them bad luck, we wish that they would change their deceptive ways for the benefit of startups and the broader tech community.

Just for your information: you can contact us via this form or email me directly via [email protected]eu (anonymously or otherwise).

Is Web Summit a scam? Well, if you have to ask ...
Comments 69
Follow the developments in the technology world. What would you like us to deliver to you?
All

NEXT
9 challenges you'll face as a Spanish entrepreneur
Editor's note: this is a guest post from Point Nine Capital investor Rodrigo Martinez, who also…
Rodrigo Martinez