OpenJet launches in Europe with €3 million in funding, aims to make booking a private jet as easy as a hotel room 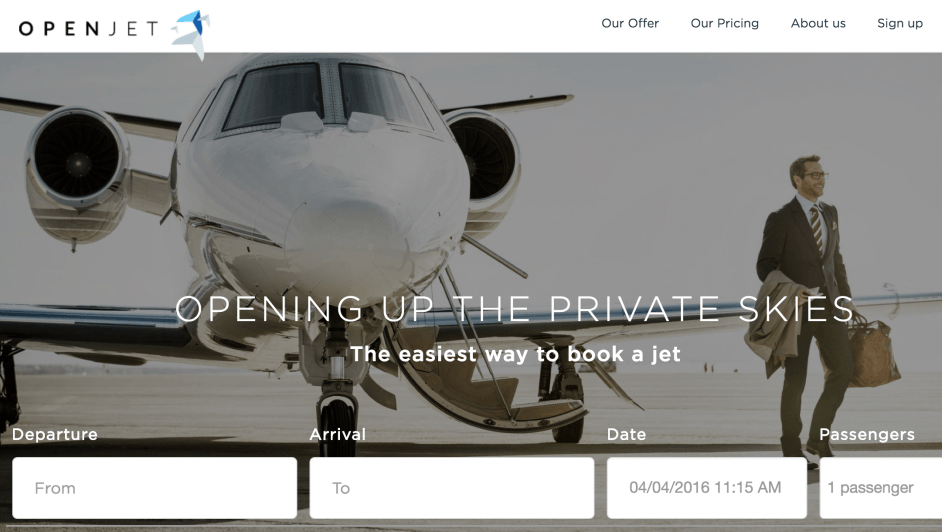 Make way for another 'Uber for private jets', this time from and in Europe.

OpenJet has a cloud-based platform that provides charter jet operators with a complete ERP solution for operation management. This allows the startup direct access to, and management of, operational data to calculate availability and pricing of flights in real-time: aircraft, crews, pilot flight time limitations, airports, logistics, etc. and offer it to agencies and travellers directly.

OpenJet is launching in the United States in June, but is available in Europe starting today (and no, it's note a joke, I checked). Competitors in the US include JetSmarter and BlackJet, and in Europe's there's also Victor and Stratajet.

“Unlike our competitors, we don’t aim to create a billionaire's club. We are bringing efficiency and liquidity to a very inefficient market. Our technology provides the traveler with the optimal planes like Uber did to ground transportation, providing cheaper flight for fliers and increasing the paid use of aircraft for operators.”

The company charges a 7.5% fee on all transactions and says it is already being used by jet operators in France, Germany, Switzerland, the UK, Belgium, and the United States. Bookings can be done on OpenJet's website, but the startup has also inked an exclusive partnership with Amadeus, a provider of a widely used distribution system for travel service providers and agencies.

On a sidenote: OpenJet is officially headquartered in Luxembourg, but the aforementioned COO and the original founder (Antoine Blanc) are seemingly based in Paris. Meanwhile, the CEO of OpenJet, former FlightAware exec Shawn S. Sullivan, is based in New York City.

Strangely, the domain name openjet.com is registered to Corentin Denoeud, who is the CEO of what is seemingly another OpenJet competitor, based in France, called Wijet (unless they were acquired/merged into OpenJet). Go figure.

OpenJet launches in Europe with €3 million in funding, aims to make booking a private jet as easy as a hotel room
Comments
Follow the developments in the technology world. What would you like us to deliver to you?
All