Too fast, (not) too furious: 1,053 funding deals closed in the past four months, fastest pace on record 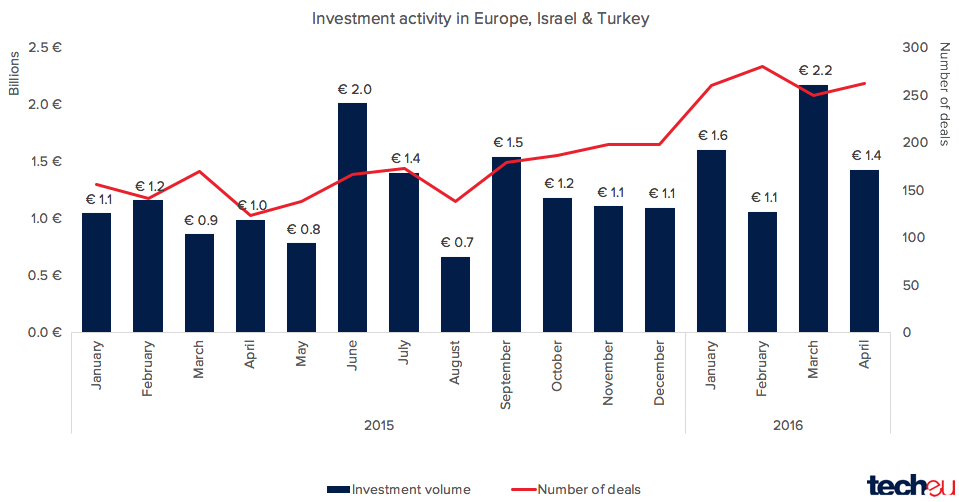 2016 continues to be a record-breaking year for the European, Israeli and Turkish startup ecosystems when it comes to fundraising, as more than 1,000 tech startups have secured capital in the first four months of the year.

The 1,053 investments closed from January to April combined for €6.2 billion, almost half of all capital raised in 2015 (in 1,500 deals) across the region - notably including Spotify's $1 billion debt round. Last year, the 1,000 deal figure was not surpassed until July, which points to the fact that the European tech ecosystem is _de facto_ accelerating, at least in terms of funding deals.

The majority of these deals took place at the early stage, with one third of all rounds being smaller than €1 million and 63% smaller than €5 million.

This, as we have previously commented, means a slightly lower average size of investments, and implies that any possible sign of a market cool-off is currently being offset by a significant surge in the number of total deals.

The €6.2 billion raised in the first four months of 2016 represent a +54% year-on-year uplift, whilst the number of deals have increased by 78% compared to the same period a year ago.

For more information, please read our in-depth report on the European Tech Funding markets in Q1 2016 - which you can buy here for £99.

When less is more: 21% of EU tech exits involved US companies in Q1 2016, lowest rate in two years

European Tech Funding Report for Q1 2016: a record-breaking quarter (€4.8 billion) under the microscope

European Tech Exits Report for Q1 2016: an increase in deals but a drop in total value, and five IPOs

Too fast, (not) too furious: 1,053 funding deals closed in the past four months, fastest pace on record
Comments
Follow the developments in the technology world. What would you like us to deliver to you?
All

NEXT
Jolla has secured $12 million in funding to continue Sailfish OS development and licensing business
Jolla, the Finnish developer of an open mobile…
Robin Wauters