Tech.eu Insights creates insight and guides strategies with its comprehensive content and reports. Browse popular Insights content.
Examine the effects of the latest technology with the Tech.eu lens, see the details and create powerful strategies. Take immediate action to access exclusive articles and reports.
Review Advantageous Packages
Does your company have Insights access? Check it
Features/Profiles
Sponsored by EIT Digital

The 2016 edition of the EIT Digital Challenge has come to a close, but it’s just the beginning for the scale-ups who took part and now have access to resources to grow their businesses across the EU.
Shaheen Samavati 16 December 2016
Share
Facebook Twitter Linkedin

Editor's note: This is a sponsored article, which means it’s independently written by our editorial team but financially supported by another organisation, in this case, EIT Digital. If you would like to learn more about sponsored posts on tech.eu, read this and contact us if you’re interested in partnering with us.

What will it take for the next big tech success story to come from Europe?

That’s the challenge that EIT Digital, backed by the European Commission, has set out to solve by creating a network of resources across every EU country that make it easier for European tech companies to cross fiscal, regulatory and cultural borders. The organization has a physical presence in 10 EU countries, as well as Silicon Valley, and collaborates with other organizations in the rest of the EU.

“Our ambition is to build great, large technology companies that are as strong or stronger than US or Asian companies,” said Dolf Wittkämper, head of the EIT Digital Accelerator program. “To do that, we need a level playing field.”

As of April, the organization had invested €1 billion in fostering European digital innovation and entrepreneurship, and announced an additional investment of €1 billion in the coming years.

And it’s already had some impressive results. For example, French EIT-backed scaleup NAVYA went on to raise €30 million for its electric, driver-less shuttles, and German scaleup Distribusion raised €6 million for its distribution system for inter-city bus rides.

EIT Digital established its accelerator program in 2012, and its startup competition, known as the EIT Digital Challenge, was born in 2014 to identify leading startups from across Europe that could benefit from the organization’s network of more than 130 top European corporations, SMEs, startups, universities and research institutes. Over time, both the accelerator and the competition have been shifting their focus from early stage startups to “scale ups” that have a product already on the market.

Wittkämper said the organization recognized that this was the area where they could have the biggest impact, by helping companies that already have a functioning business and take them to the next level, with access to customers and access to investors on a European scale.

The winners of this years challenge were announced earlier this month. On Monday, the 16 winners gathered in Berlin for the EIT Digital Challenge Ignition Days. Founders of the winning startups spent two days meeting with EIT Digital contacts and partners from across the EU and working to identify ways to grow their client base and raise needed financing. The top startup in each of five categories of strategic importance to the European economy (Digital Cities, Digital Industry, Digital Wellbeing, Digital Infrastructure, and Digital Finance) also took home a €50,000 cash prize.

But startups don’t have to be part of the Digital Challenge to take advantage of the resources that EIT Digital has on offer. The organization accepts growth stage tech companies into its accelerator on a rolling basis.

Although, “accelerator” may be a misnomer. In reality, it is a year-long support program for established scaleups, rather than a quick jump-start for early stage companies. And, unlike most accelerators, EIT Digital doesn’t take equity in any of the companies it supports.

However, it does ask participants to give back to the organization once they’ve benefited from the services. Three years after taking part in the accelerator, the companies are asked to make a contribution, including success fees on sales that resulted from introductions made by EIT Digital. The goal is to eventually be self-sustaining, and no longer have to rely on public funding.

Since 2012, the EIT Digital Accelerator team has helped more than 240 European startups, who have raised a total of €250 million, with €80 million raised through direct support from the accelerator’s Access to Finance team. In 2016, the average investment size for EIT Digital-supported companies was €3.6 million.

“EIT Digital has been supporting us from the first moment on in our growth strategy and expansion by hands-on coaching, challenging our approach, opening up the international network and always thinking ahead for the next steps,” said Wouter Uten, Founder and CEO of Ugentec, an EIT Digital-backed scaleup that raised €2.15 million in November. The Belgian company makes software that uses artificial intelligence to interpret molecular lab results in order to detect infections and diagnose cancer.

In the future, Dominik Krabbe, who leads the EIT Digital Challenge, said his organization may rethink the prize package and timeline for the challenge in order to attract even more later stage startups.

“Bigger companies who are ready to scale care less about only winning a prize, and more about practical ways to grow their business. We will make sure to adapt the contest in order to provide the best possible program for the scaleups, as we have done throughout all editions” he said. 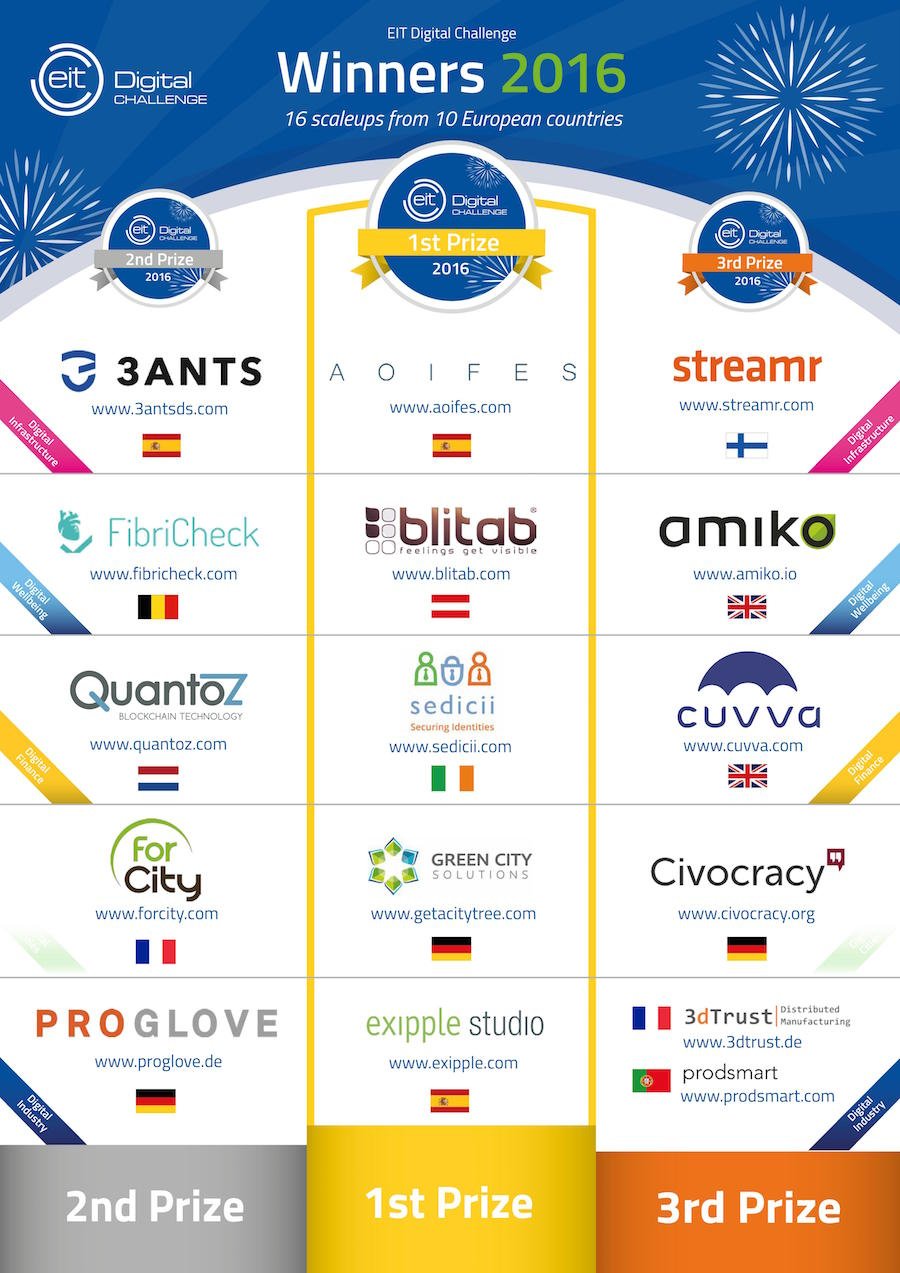 EIT Digital’s Ignition Days kick off next round of support for European high-growth tech companies
Comments
Follow the developments in the technology world. What would you like us to deliver to you?
All