Editor’s note: This is a sponsored article, which means it’s independently written by our editorial team but financially supported by another organisation, in this case, EIT Digital. If you would like to learn more about sponsored posts on tech.eu, read this and contact us if you’re interested in partnering with us.

EIT Digital Challenge, a pitching contest for deep-tech scale-ups with €750,000 worth of prizes that consist of both cash grants and services, has announced the 10 winners. The finals took place in Brussels where a jury determined which startups were the most promising and innovative.

All scale-ups participating in the contest must be based in the EU with annual revenue of more than €300,000 or at least €2 million in funding and must be less than ten years old. This year, 200 startups from 24 countries applied but only 10 got to become the winners.

Divided into five categories — Digital Industry, Digital Cities, Digital Wellbeing, Digital Infrastructure, and Digital Finance — the chosen companies will get support from the EIT Digital Accelerator during the next year. In addition to that, the teams that took the first places will get a €50,000 cash prize each.

We've taken a closer look at this year's winners, and they look genuinely fascinating and worth keeping an eye on. 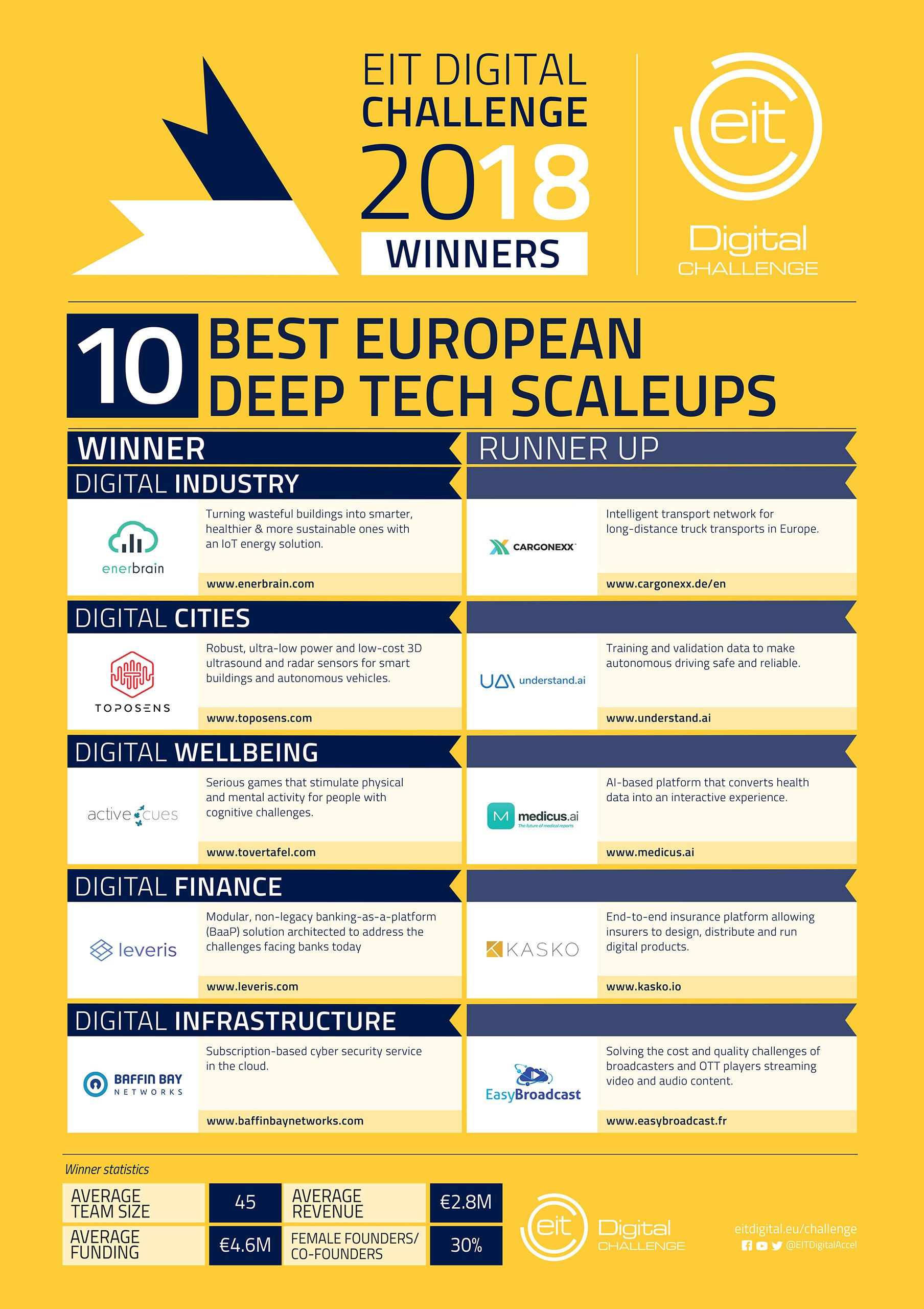 The winner, Italian-founded Enerbrain, makes air conditioning in buildings smarter and less wasteful by placing sensors in the systems and applying machine learning algorithms to optimise the process. It also offers an intuitive visual dashboard available on the web and as a mobile app, so that the building manager can take care of several buildings efficiently. According to the company's data, buildings that are using Enerbrain have already decreased their energy bills by up to 33 percent.

The second place went to the German scale-up Cargonexx — a platform that brings together carriers and freight forwarders in order to increase the efficiency of the trucking industry. The company employs statistical data analysis and complex proprietary algorithms to predict supply and demand at any given time and offer the best price. In addition to that, the scale-up streamlines the booking procedures and decreases the paperwork and unnecessary hassle that's often associated with it.

The Dutch scale-up Active Cues, which won this category, develops serious games for people with dementia, learning disabilities, or children with autism to create moments of happiness in residential care. The company's games are created to be played with Tovertafel, a device that combines a beamer, several sensors, speakers, and a miniature computer to run the applications. It can project games on any surface for everyone around to play.

Medicus AI, the Austrian startup that took the second place, is a platform that converts health data into a visual and interactive experience. Its mobile app allows users to scan their blood test report, answer a few additional questions, and get easy-to-understand personalised insights and actionable recommendations.

German scale-up Toposens, the winner in the Digital Cities category, has developed a 3D ultrasound sensor that can provide information about the near-field environment. Its product, TS ALPHA, can be used in robotics, from warehouse machines to vacuum cleaners, as well as in the automotive solutions.

The runner-up, another German company UnderstandAI, provides high-quality training and validation data for autonomous driving models. The company uses an advanced process that bounds box annotations and semantic segmentation for 2D camera data as well as LiDAR footage, with specific meta-attributes, which helps to save time and get higher-quality data. The scale-up's clients include Volkswagen and Eindhoven University of Technology in the Netherlands.

Leveris, a core banking platform founded in Ireland, has won the category to get the cash prize and support from EIT Digital Accelerator. Simply speaking, the scale-up delivers everything necessary to run a digital bank, from the UI to the deepest back-end mechanisms. The modular platform is equally good for traditional banks that want to build a digital offering and entrepreneurs launching new challenger banks.

The UK-founded Kasko is an API-powered agile insurance product and distribution platform. Simply speaking, the scale-up provides insurers with the means of digitising their business that can be integrated with different third-party solutions. The company is active in five countries with over 30 products, 15 insurance partners, and 700 distribution partners.

Swedish scale-up Baffin Bay Networks, the winner of the category, operates the Threat Protection Platform, a subscription-based cybersecurity service. The company runs a sophisticated Threat Cloud and executes potential threat in a sandbox to make sure no malware can make it to the clients' computers. The company has already raised more than $7 million in two rounds, the more recent of which was led by EQT Ventures.

EasyBroadcast, the French runner-up, has developed a hybrid streaming technology aimed at improving video quality. The main idea is to combine the traditional unicast delivery that uses content delivery networks (CDN) with peer-to-peer adaptive streaming mode. EasyBroadcast's protocol allows for transitioning between the two modes as necessary in order to achieve as smooth playback as possible and cut the bandwidth cost for broadcasters.

All 10 winners will receive one year of international growth support by the EIT Digital Accelerator, a pan-European team of distributed, hands-on business developers and fundraising experts operating from 15 cities across Europe, along with a hub in Silicon Valley. Since 2012, they have supported nearly 300 startups who raised over €450 million in investment, with €100 million directly facilitated by the accelerator.

EIT Digital Challenge announces the 10 winning deep-tech scale-ups
Comments
Follow the developments in the technology world. What would you like us to deliver to you?
All