Tech.eu Insights creates insight and guides strategies with its comprehensive content and reports. Browse popular Insights content.
Examine the effects of the latest technology with the Tech.eu lens, see the details and create powerful strategies. Take immediate action to access exclusive articles and reports.
Review Advantageous Packages
Does your company have Insights access? Check it
Features/Profiles
Sponsored by The Webby Awards

Are you making great work on the Internet? Last chance to enter The Webby Awards is February 8

Editor’s note: This is a sponsored article, which means it’s independently written by our editorial team but financially supported by another organisation, in this case, The Webby Awards. If you would like to learn more about sponsored posts on tech.eu, read this and contact us if you’re interested in partnering with us.

The Internet and the world of technology have changed dramatically over the past 20 years. And as the Internet evolves, so too does the range of work celebrated by The Webby Awards.

Known as “the Internet’s highest honour,” as put by The New York Times, The Webbys is one of the longest-going international awards for Internet excellence. With over 13,000 entries received from 70 countries last year, it’s also the largest of its kind in the world. Webby Winners range from tech giants like Google, Spotify, and BBC to creators and companies like WeTransfer, Night Sky, Mobgen, FKA twigs, LEGO, and well beyond.

If you’re making excellent digital work, there’s still time to make sure it’s in the running with the best of the Internet, but not much: the last chance to enter the 23rd Annual Webby Awards is next week, on Friday, February 8th!

The Webbys accepts work across Websites; Advertising, Media & PR; Video; Apps, Mobile, and Voice; Social; Podcasts; and Games — with a range of new categories introduced this year to reflect the evolving digital landscape. Notably, The Webby Awards worked alongside experts in the International Academy of Digital Arts and Sciences (IADAS) to introduce a dedicated suite of categories for Voice this season, acknowledging the rapid spread in the adoption of voice-enabled apps and smart assistants.

“We are starting to see the massive impact of artificial intelligence on the Internet that we use every day. Websites, once the dominant interface by which we accessed services and information, are being replaced by new AI-powered apps and interfaces like Voice and AR,” said David-Michel Davies, CEO of The Webby Awards. “No one understands this complex and exhilarating dynamic, and how to recognize real and lasting innovation, better than our Academy—true masters of their craft and pioneers of our collective future on the Internet.”

While members of IADAS choose the Webby Award Winner in each category, there is also a public voting period, The Webby People’s Voice Awards, when the public votes for a People’s Voice Winner as well. Last year saw votes from over 700,000 people from over 200 countries. 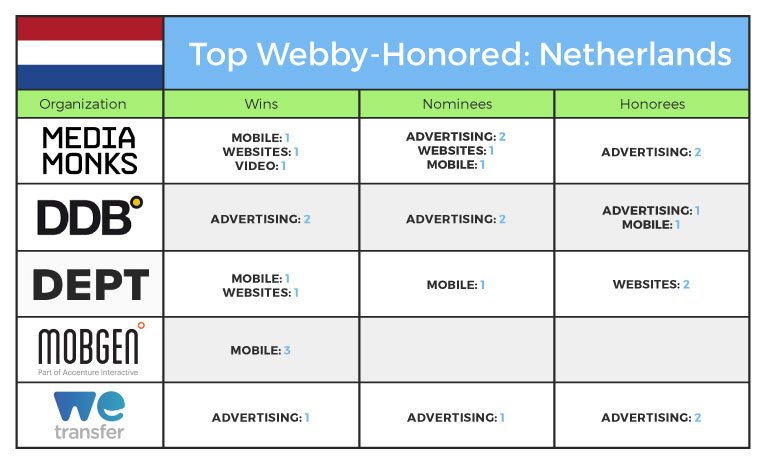 Founded in the US in 1996, The Webby Awards is now a truly global celebration of the best of the Internet. Last year alone saw many European companies leading the way in terms of the number of Webby honours, including organisations like MediaMonks (Netherlands), Hello Monday (Denmark), Denkwerk (Germany), and The Guardian (UK).

With February 8th as the extended deadline for entering the competition, you still have a week to enter to win “the Internet’s highest honour.” Don’t miss your last chance to have your work ranked amongst the world’s best and enter now at webbyawards.com.

Are you making great work on the Internet? Last chance to enter The Webby Awards is February 8
Comments
Follow the developments in the technology world. What would you like us to deliver to you?
All