From the outside, the fashion industry looks glamorous and cool, with expensive shows, posh stores, and exquisite garments. Hidden under that veneer, however, are some of the most complicated and margin-hungry supply chains, with millions of people working in far corners of the planet to produce that nice pair of skinny jeans and polo shirt.

What else is quite unglamorous about the fashion industry is that it's a pretty big polluter of the environment. One big offender is the dyeing process: of about 300 litres of water to treat 1kg of fabric, 75 litres goes to dyeing. This results in thousands of tons of waste water dumped from dyeing houses all over the world every year — a problem that could actually be solved today.

Enter DyeCoo, a 10-year-old Dutch scale-up that uses CO₂ reclaimed from existing industrial processes to dye fabric without any need for water. Headquartered in Weesp near Amsterdam, the company is a spin-off of FeyeCon, a research organisation that looks at using CO₂ to solve problems of various industries.

Headed by the newly appointed CEO Micke Magnusson, a Swedish-born self-proclaimed “business environmentalist,” DyeCoo has already sold 15 of its machines to dyeing houses in Taiwan, Vietnam, and Thailand. Magnusson admits that dyeing could be the most unglamorous part of the fashion industry — and yet this is where he wants to be.

“I've chosen this because I can make a massive impact; for me personally, it's not so much about money,” he said. “I don't have a problem with finding purpose in my job.”

The technology of DyeCoo sounds quite futuristic, but it is actually well-researched and proven. A machine pressurizes CO₂ until it becomes supercritical, which is a state in which it gains “a very high solvent power,” according to the company's explanation. The dye dissolves in CO₂ and gets transported deeply into the fabric's fibres.

Thanks to this method, there's no need for water in the dyeing process. Also, no additional chemicals are used, while as much as 98 percent of the dye makes it to the fabric. The machine works in a closed loop, recycling 95 percent of the CO₂ — so the whole process is close to wasteless.

Magnusson is quick to mention that DyeCoo's tech is not the only way to reduce waste in the dyeing industry.

DyeCoo's massive three-metre-tall machines, which take up 10×15 metres of space, are built by the company's manufacturing partner VDL near Eindhoven. Each of them costs about €2.5 million, which is more expensive than a conventional machine. However, the dry process eliminates the need for a water treatment plant that'd be an essential part of a traditional dyeing house. With that in mind, the long-term operation of a DyeCoo machine can be less expensive than that of traditional hardware.

Even though using a CO₂-based machine makes both environmental and — in the long term — practical sense, making headway in the incredibly fragmented market isn't easy. 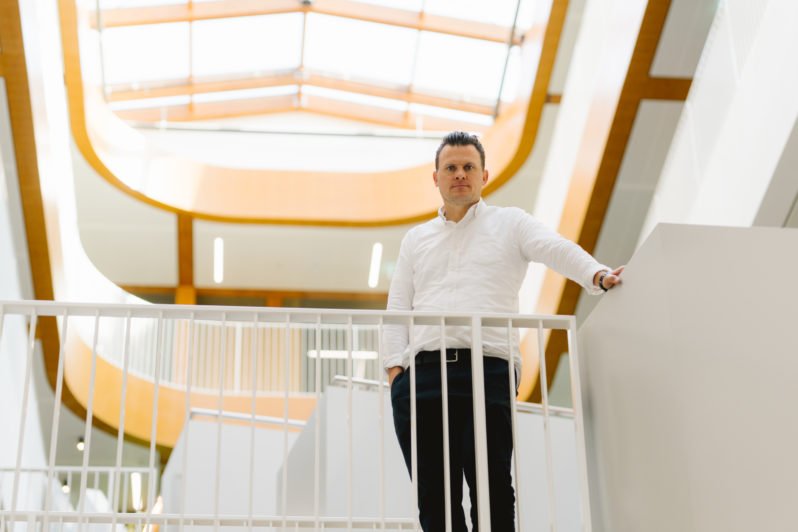 In fact, DyeCoo's sales process starts with actual brands of retailers. The dyeing houses may not care about environmental issues enough to just cough up a few million euros for new machinery, their customers — that is, the brands — certainly do care about their sustainability profiles. With their support, Magnusson says, convincing the dyers becomes less of an impossible task.

Any big fashion brand would have dozens supply chains for each garment, which means working with hundreds if not thousands of dyeing houses. Most of them operate machines that are more than 40 years old — and some are more open to upgrading than others.

“We're appealing to the people in the supply chain who think about their legacy, their responsibility as a supplier, and who want to improve their industry,” Magnusson said. “We're not really appealing to those guys who only calculate margins and just want to have quick returns.”

Magnusson, who joined DyeCoo in 2019, gives himself five to 10 years to bring the company's share of the polyester dyeing market to 1 percent, which would mean a turnover of over €500 million.

“I'm not interested in anything less than that,” he said. “All we had 10 years ago was an idea; five years ago there was just a prototype; now it's a working machine. It's about getting the product out and making it more affordable.”

With 14 employees and €19.5 million raised in funding over the past 10 years, DyeCoo seems ready to make the big step from a niche to the mainstream. To get some help along the way, the company applied for this year's batch of the Techleap Rise programme and got selected to be part of the 11-strong cohort.

“The reason I wanted to be part of the programme is that we have never been more ready to go out of the niche to wider industry adoption,” Magnusson said. “My aim is to get inspired and receive tips on how to achieve faster adoption of a technology that we know is disruptive.”

To quickly reach his goals, Magnusson is looking at turning DyeCoo's business model upside down. Instead of dealing with long sales cycles, the company is considering setting up dyeing houses of its own to tap into the supply chains of some of the world's biggest brands. Further down the line, there's also room for a franchising scheme for sustainably-minded entrepreneurs who want to run wasteless operations.

To that end, DyeCoo is looking to raise another €20 million or more — but Magnusson is sure access to capital won't be an issue with the interest he sees from the brands. As sustainability action becomes critically important, DyeCoo is in a unique position to bring in tangible waste reduction results within a short timeframe.

“There is no other way , the climate change and CO₂ reduction movement will not stop,” he said. “The only way to make sure you don't get hit by the train is to be on the train.”

The hill to dye on — How DyeCoo brings sustainability to hidden parts of the fashion industry
Comments
Follow the developments in the technology world. What would you like us to deliver to you?
All