As the United Nations Environment Program states, buildings today consume approximately 40 percent of global energy and emit one-third of global greenhouse gas emissions. That sets the development of energy-efficient mechanisms for buildings and the cutting down of their emissions as vital long-term goals for many tech players today.

Dutch company PHYSEE serves as a great example of such an enterprise. Starting as a developer of coatings, today PHYSEE has evolved into an R&D and data company with more than 50 employees onboard. Its mission of balancing out energy production and consumption is realised in SmartSkin, a technology that contributes to creating a sustainable building facade.

“The name PHYSEE comes from ‘physics’ and ‘seeing,’ so we make physics central to our perspective and try to make the world a better place,” he said.

PHYSEE was founded in 2014 by two physicists, Ferdinand Grapperhaus and Willem Kesteloo. Their strong academic background helped them to formulate the desired objective of their business.

“We see as physicists that a large part of the global climate change problem comes from buildings,” Grapperhaus said. “Buildings are responsible for 40 percent of the total global energy consumption and therefore we want to reduce this number.”

Having identified that the main source for energy loss is the facade, Grapperhaus and his team focused on making this part of the building more efficient.

“Six years ago we started with developing coatings, but right now we are both an R&D company and a data company,” Grapperhaus said. “And the latter has been a pivot over the past six years, which I never anticipated at the beginning.”

Together with this transformation, Grapperhaus and his team realised the importance of constructing smart and sustainable buildings for the real estate environment. Searching for a perfect solution  to this issue, they created the technology of the future: SmartSkin. 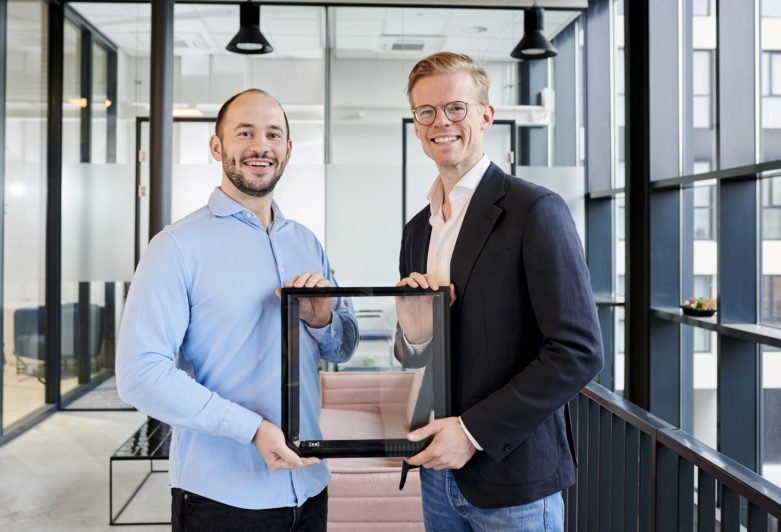 SmartSkin is a technology developed by PHYSEE for lowering energy consumption and generating electricity, thus it is a perfect match for both new and existing buildings.

SmartSkin is implemented in glass windows, which are enhanced with solar cells and a range of sensors. Solar cells harness electricity from the sun while sensors gather information about light intensity, temperature, pressure, and air quality. The data obtained is fed to and interpreted by the Energy Efficient System (EESY), a smart hub that doubles as a power storage device. This connector is waterproof and can be easily connected to the main building grid.

The EESY processes the collected data to create the perfect setting for an office by balancing out the conditions inside and outside in an energy-efficient way. This grid controls all the other devices in your room, like the blinds, air ventilation, and lights.

Such innovative algorithms help PHYSEE to save up to 30% of a building’s energy consumption, which is a significant number for any business. What's more, it is also possible to install SmartSkin in apartment buildings, where multiple users would access the software platform.

“It's a bit more complex for us because what we have to do is build user IDs and logins, etc., for every homeowner,” Grapperhaus said. “But once that's done, every homeowner can benefit from a dynamic facade creating a comfortable and sustainable living environment.”

SmartSkin sounds like state-of-the-art technology, which you would expect to come at a premium. However, the advantages that it brings to customers significantly outweigh the initial expenditure.

“The projects that we are actually selling right now have a payback time within five years, which makes it a very attractive prospect for our customers,” Grapperhaus said. “And besides the value proposition, they enable our customers to build in a much more energy-friendly way”.

Stepping into a new market

Having secured seed funding, PHYSEE is currently raising another round. So far, the company has secured about €6 million, half of which is equity funding. Grapperhaus already has half of the current round committed by local investors and is turning abroad to raise the remainder.

“We’re looking for impact and hardware-focused investors who know what it takes to build a hardware business and are not afraid of the challenge,” Grapperhaus said.

Predominantly, PHYSEE needs and wants to use this money for scaling up internationally. Organic growth is not the path they're taking, as it is time-consuming.

“So we have a business proposition right now, which is fully developed. It has a good business model and it can have a serious impact on buildings globally,” Grapperhaus said. “And if we can now scale our business with the right funding, we can set up different commercial activities in different countries by actually increasing the speed of adaptation and also disrupting the building energy markets.”

A scalable model of PHYSEE works through a collaboration with their production partners, who produce window glass worldwide.

“We send them the components, solar cells, and sensors, and they integrate and install them at different locations all over the world,” Grapperhaus said. “And wherever it's installed, we offer a data service, which can reduce the energy footprint of a building significantly.”

The ultimate goal for PHYSEE is to occupy the position of an OEM in its niche. Currently, it is already reaching out to Germany, where the focus on sustainable buildings is strong. In the long term, Grapperhaus and his team want to have their products presented either on the Asian or the American markets.

“We're currently undertaking some market analysis market analysis to find out what would be the best step for us because we're not going to try to do both at the same time,” Grapperhaus said.

Six years after launch, PHYSEE is an advanced scale-up with a feasible idea — however, there are still some challenges which the company has to face.

A lack of recognition is the first barrier on PHYSEE’s road to success. The company has already sold more than 7,000 km² of SmartSkin, but generally speaking, it is still unknown on the market.

Pursuing its ambitious goal of disrupting the conservative real estate market and paving the way to the future with sustainable architecture, PHYSEE has already been cooperating with some real estate developers over the past two years.

“Even more conservative real estate developers start to see that this actually can be done, so the risk is taken out of it,” Grapperhaus said. “The costs have gone down. So now all of a sudden we see a much bigger market pool than we experienced two years ago.”

There are few players on the market doing similar things, and PHYSEE has no direct competitors in its niche. Moreover, Grapperhaus sees all the other companies on global smart building materials markets as partners, because they are united by one goal — to disrupt the industry in a smart way and provide ubiquitous sustainability solutions.

“As I said, we can save 30 percent of the energy consumption of a building; that's not 100 percent,” Grapperhaus said. “If you want to make a building energy neutral, you will always need a combination of different technologies.”

This year, PHYSEE is participating in the Techleap Rise Program. This program is aimed at the Netherlands-based startups that want to scale up and get insights from some of the country’s most successful entrepreneurs. What attracted Grapperhaus and his team is the support given by the program to those innovators who do not follow traditional ways of developing their business, as well as the various business sessions that are specifically oriented towards each participant.

“So what I looked for mainly in Techleap is being connected to my peers, being connected to other founders and CEOs that are building businesses that will actually change the perspective,” Grapperhaus said. “I really liked the peer-to-peer sessions with other sustainable business founders.”

What PHYSEE values/appreciates even more from the Techleap Rise Program is that it propels high-impact businesses and helps them to raise funding to develop more quickly.

For the necessary changes to come, Grapperhaus believes that the technology should be regarded as a driving force at a governmental level. This would allow those changes to be implemented in a meaningful way.

In the future, Grapperhaus hopes that his technology will be embedded in every office to improve the environmental conditions.

“Actually our vision is that one day, it will be the standard that every window has a wire giving you green energy at daytime,” Grapperhaus said.

To accelerate the process of developing  the real estate market of the future, PHYSEE wants to carry on supporting and investing in a new sustainable office landscape.

“Every building we build right now will be there for 20+ or even 50 years,” Grapperhaus said. “So if we were going to stop investing in building sustainable architecture, that would really be a shame.”

PHYSEE: Smart energy consumption for sustainable buildings
Comments
Follow the developments in the technology world. What would you like us to deliver to you?
All