What a year in the insurtech scene! Mega rounds pilled, big tech launched insurance initiatives, and the ‘unicorn’ club welcomed several new startups. In Europe only, that ecosystem boomed as well: with around €2.5B invested during the year, through 92 deals. That’s almost two times more than 2019 and 2020 (read more) combined!

If money was highly concentrated on a very few numbers of large deals, several trends are structuring that industry: insurtech are increasingly covering the entire value chain, new business opportunities are tackled, and startups are moving up alongside the value chain.

To help you get a comprehensive view of the European insurtech scene, we are happy to provide you with further details on deals announced in 2021. Based on astorya.io's market intelligence tool, every funding round was spotted and analyzed, to build this report. You will find usual KPIs by size and countries, and business-oriented knowledge alongside the insurance value chain. 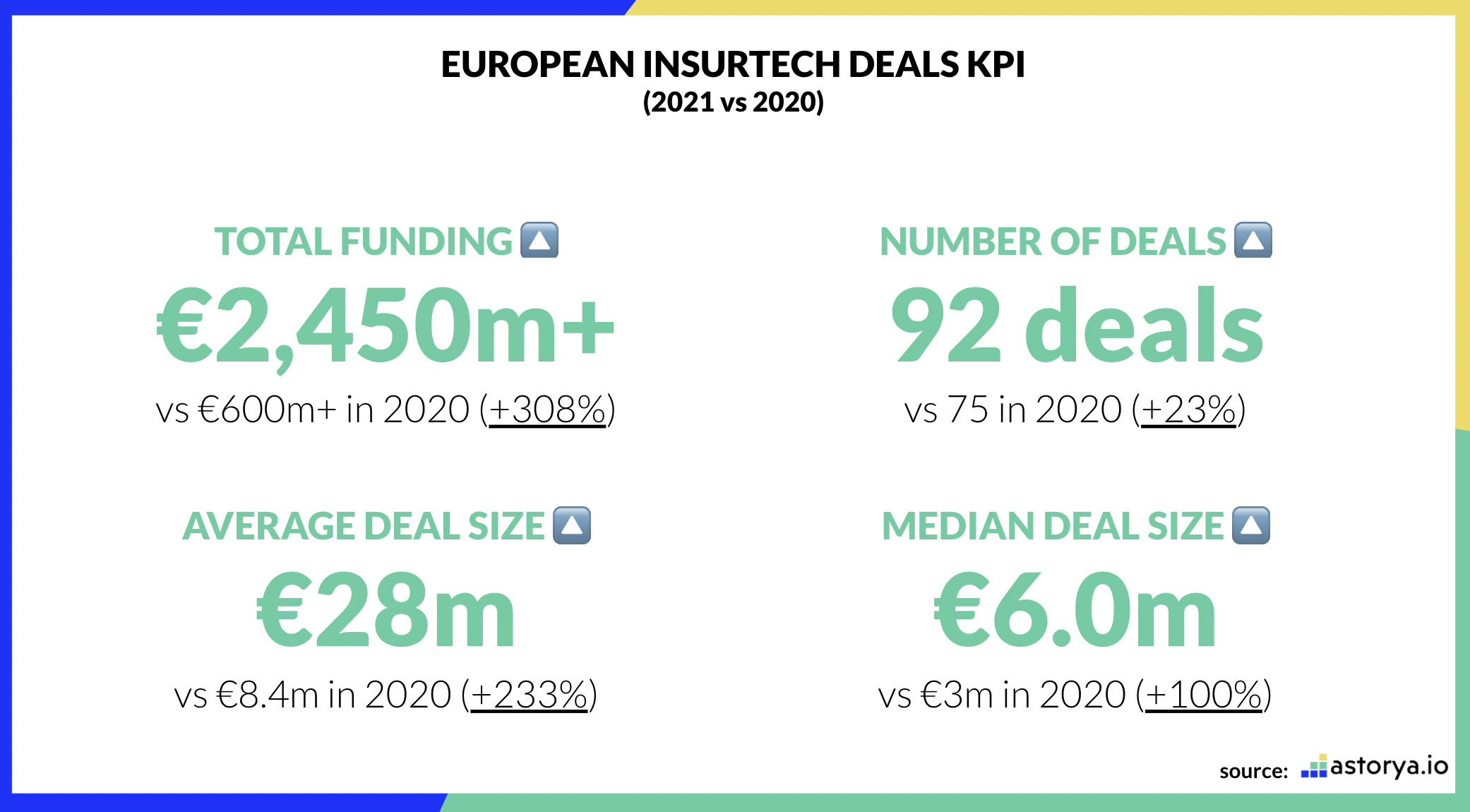 In 2021, European insurtech funding reached an all-time high, with around €2.5 billion invested through 92 deals.

As one may have expected, the ecosystem is maturing so that the average deal size jumped from ~€8 million in 2020 to €28 million last year! That’s also related to mega-rounds (tickets over €100 million) announced across Europe. 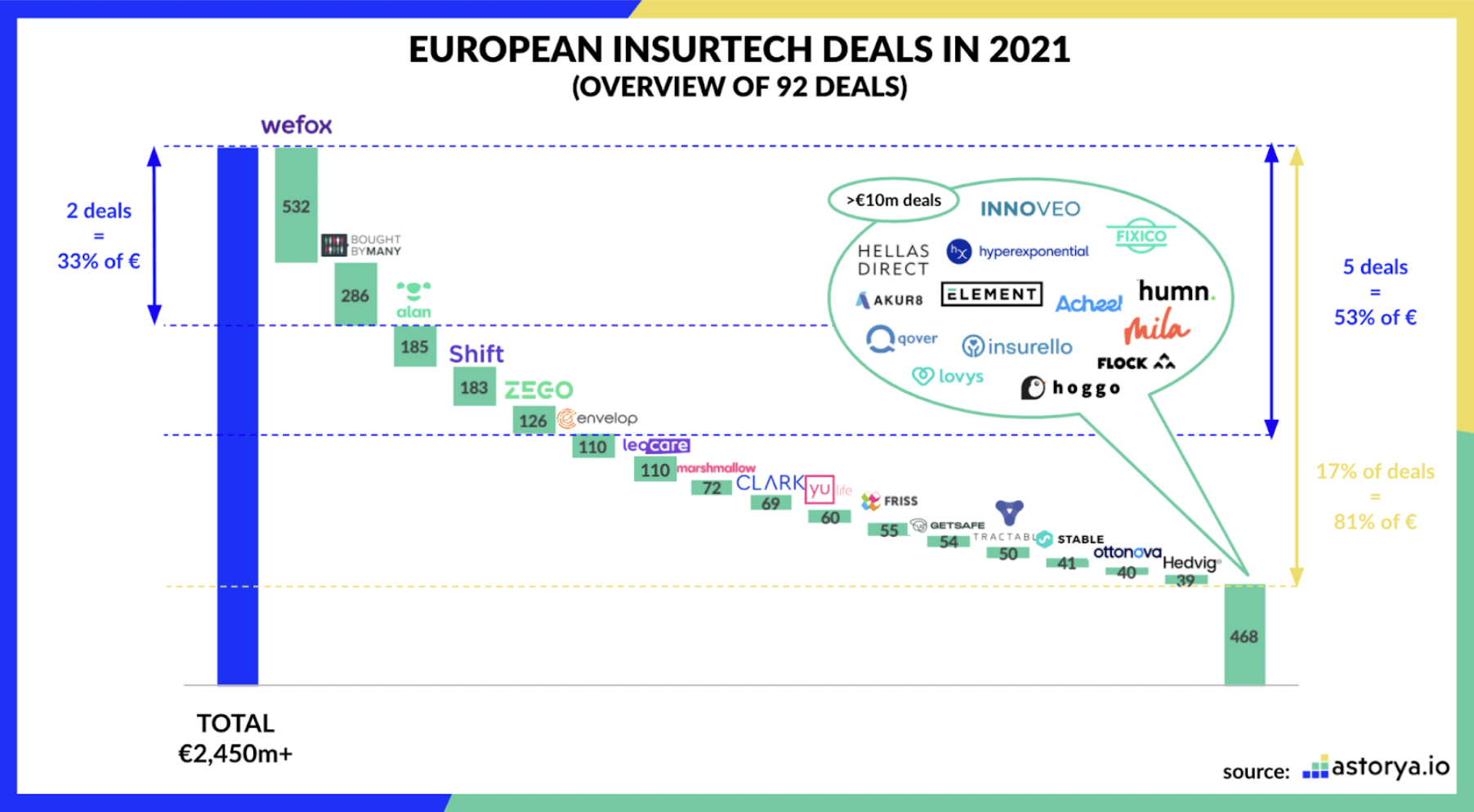 Related to mega-rounds mentioned above, the two biggest rounds combined - Wefox for €500+ million and BoughtByMany for €280+ million - attracted a third of the money invested in European insurtech startups in 2021. And the five biggest deals - adding Aland and Shift Technology both for €180+ million and Zego for €120+ million - accounted for over half (53% to be very specific) of the money invested last year in European insurtech.

Finally, half of the deals announced are worth together ~4% of overall funding last year! 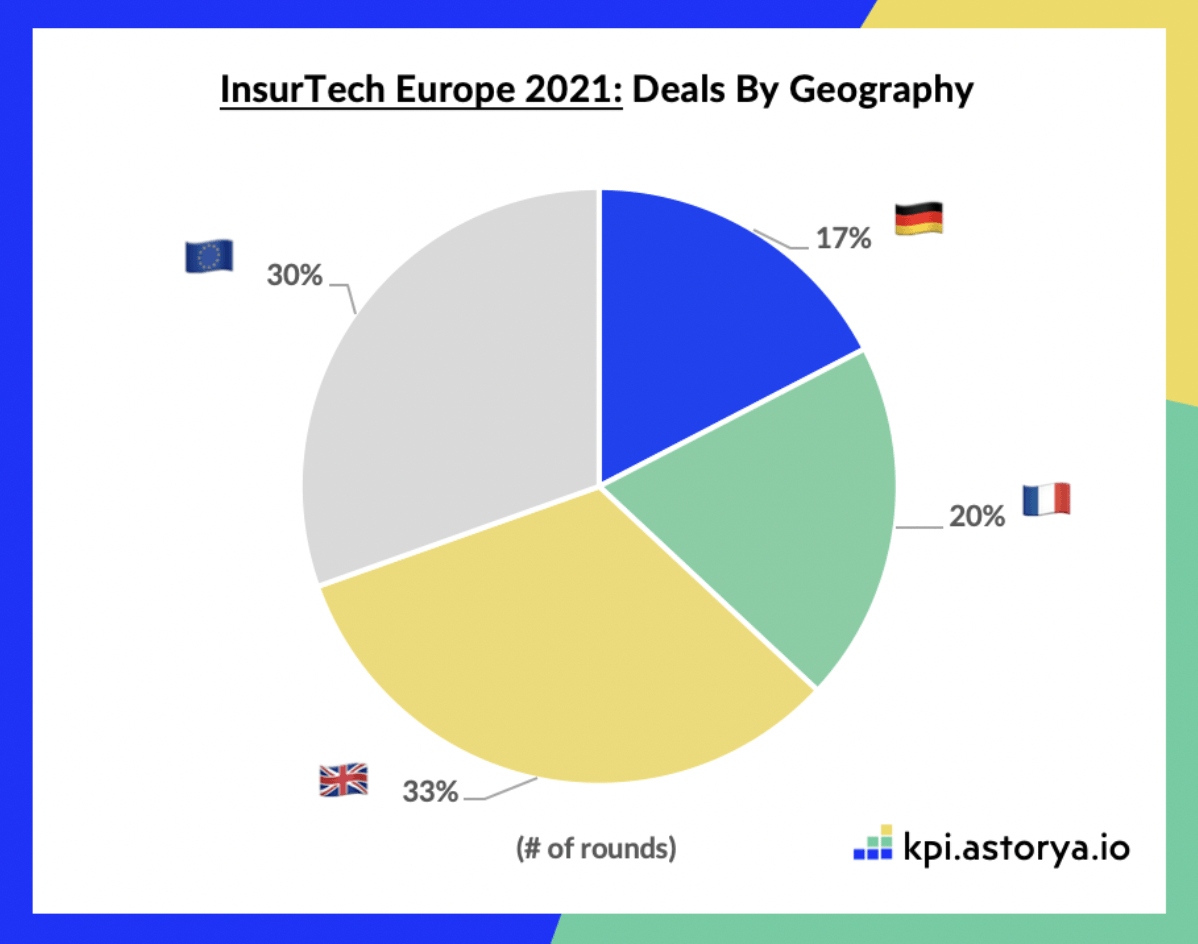 With no surprise, most of the insurtech rounds were announced in the three largest ecosystems in Europe (France, Germany, and the UK). But almost a third of deals announced occurred in other European scenes.

The UK was the most active place with both the highest number of rounds (30 deals) and level of funding (€882 million invested). If Germany seems to lag behind in terms of rounds announced (“only” 17% of all deals across Europe, i.e. 16 deals announced) it was the second biggest insurtech scene last year in terms of euros invested: €749 million. France ranked third with 18 deals announced for a total of €601 million invested. 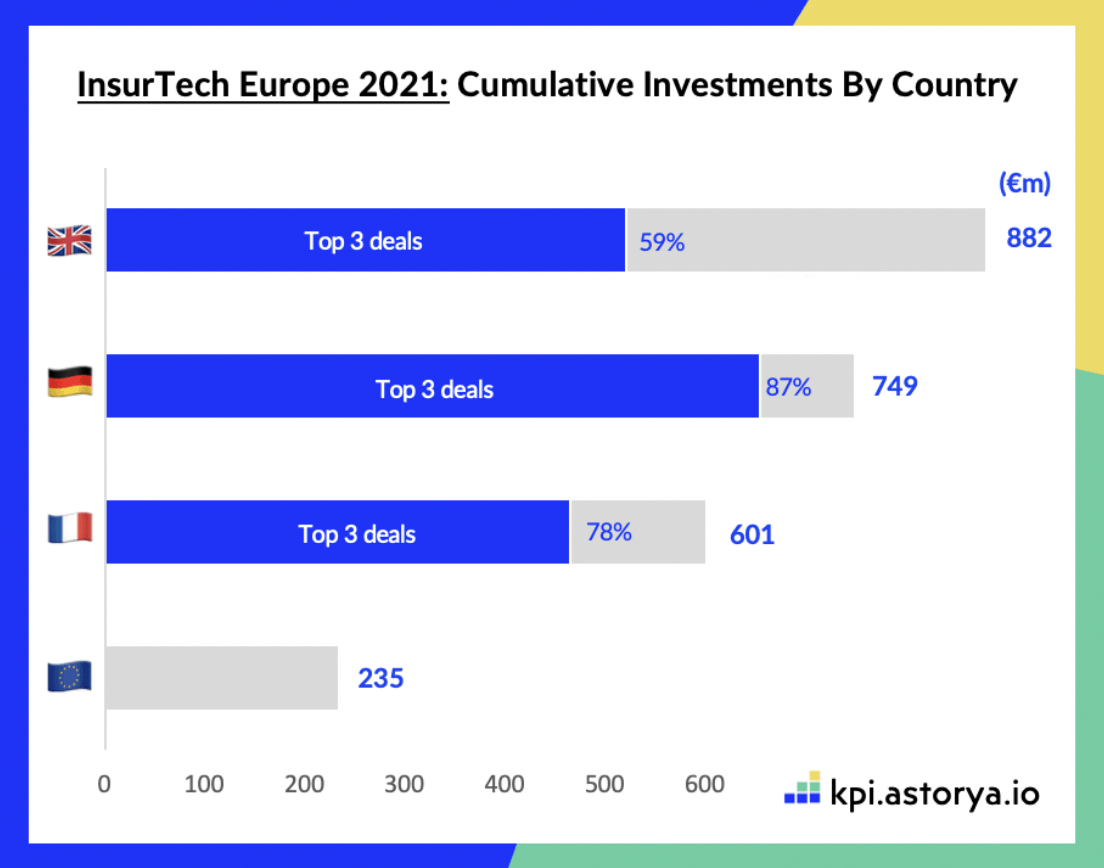 If these large numbers might make you think “it’s easy to raise money”, the reality is that money was highly concentrated in these most active ecosystems.

Having a look at top 3 deals in each of these scenes reveals these rounds combined are respectively 87% of total funding in Germany, 78% in France and 59% in the UK. 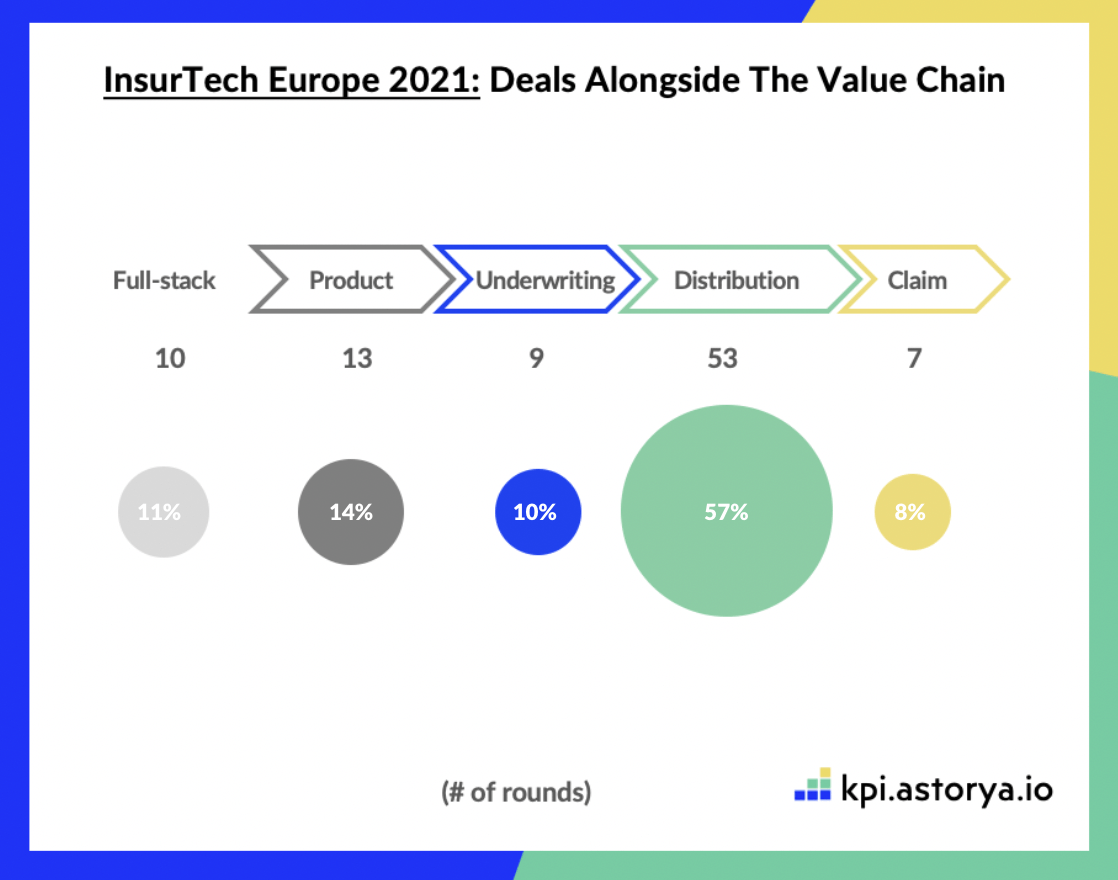 Once again, the distribution part of the value chain was the most active, with 57% of rounds announced there. Other sections are close to their usual average as well, let’s say each ~10%-15% of total deals.

The first one to make that move was Zego, and more recently Hedvig or Getsafe announced a similar move. Wefox on its side, rebranding all its activities under that single brand, including its full-stack activity formerly known as ‘ONE’. And three new players were announced last year in that space: Acheel and Mila in France, BalanceRE in Germany. 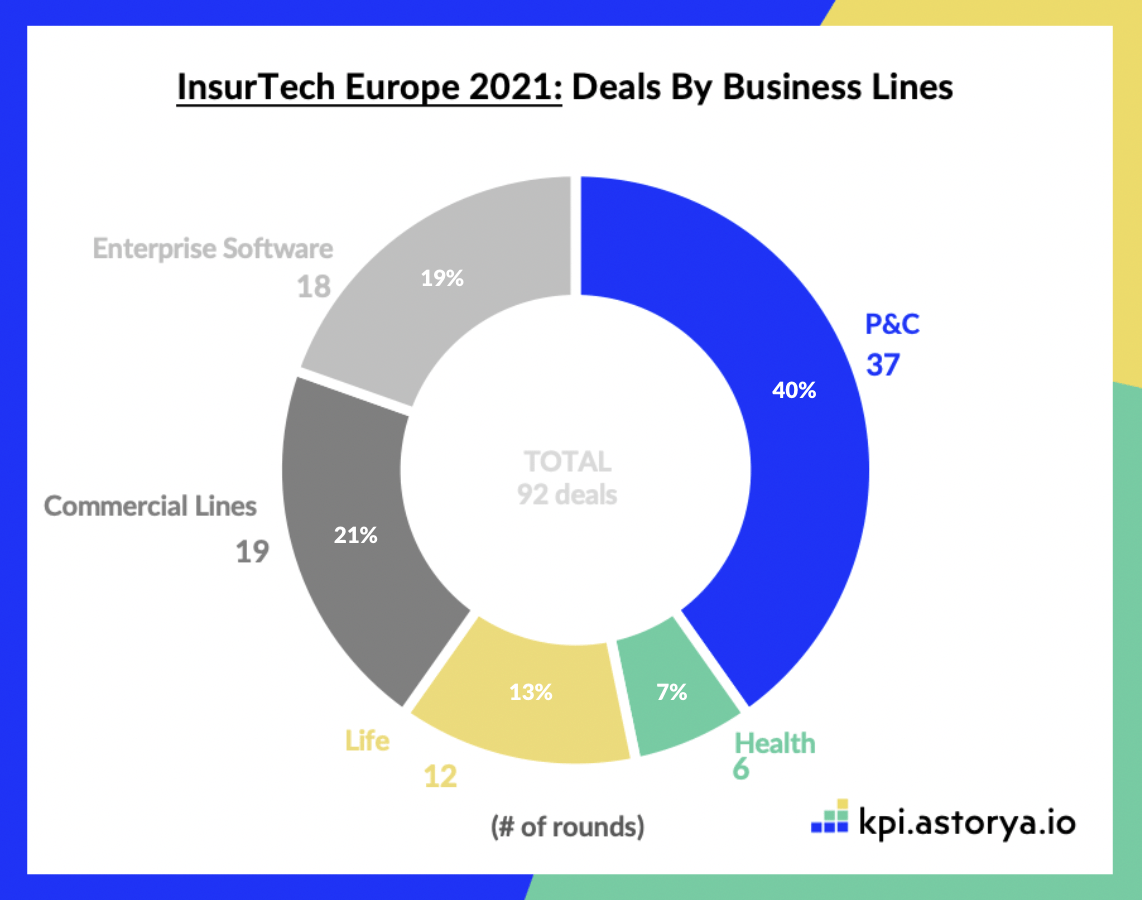 With no surprise - having in mind distribution is the most addressed part of the value chain - P&C risks have been the most targeted by insurtech startups so far.

It was again the case in 2021 with 40% of rounds towards these risks (basically home, car, travel, pocket products, etc). Commercial lines played a significant role last year with 21% of rounds done in that space. That resonates with the third wave of insurtech innovation in Europe, which is definitely addressing SME risks. B2B tech were quite active as usual with 20% of deals.

And finally, Life & Health were lagging behind with 12 and 6 deals announced last year in these spaces (compared to around half of the market in terms of insurance GWP).

As suggested before, the size of rounds announced increased dramatically last year, so that there were almost as many growth rounds (between €10 million-€100 million) as seed rounds (below €2 million): 24 growth rounds compared to 29 seed rounds.

Nevertheless the early stage was the most active with 31 deals done. And 4 deals didn’t disclose the ticket size. 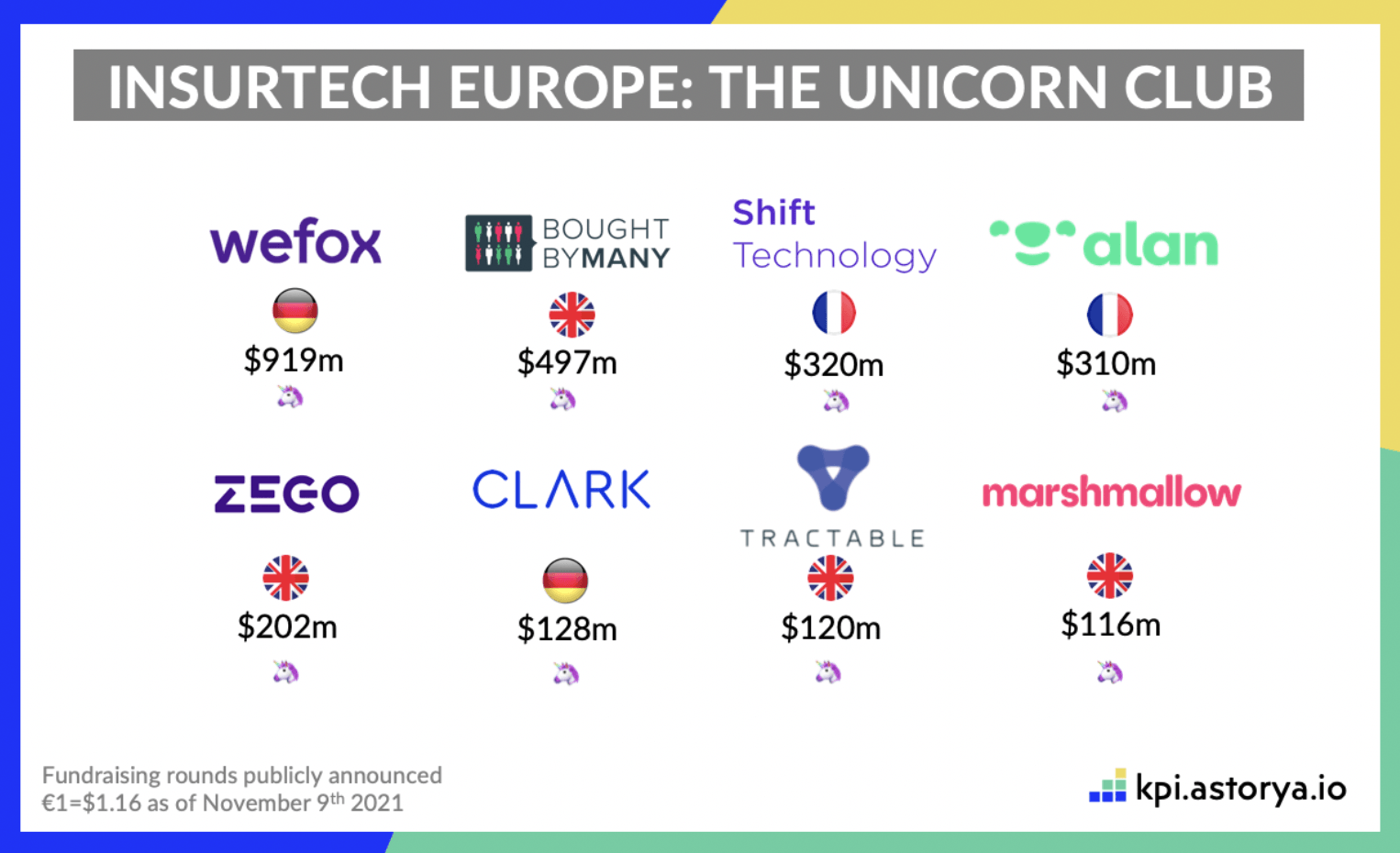 For the first time in Europe, several insurtech startups reached unicorn status in 2021. From 0 at the end of 2020, there are now 8 of them a year later.

Interestingly unicorns have explored different business models, business lines, and go-to-market strategies: if B2C distribution startups are obviously in that club (BoughtByMany around pet insurance or Clark around multi-products in Germany) there are also Enterprise Software players (Shift Technology in France or Tractable in the UK) and even full-stack players (Zego in the UK, or Alan in France).

After a crazy year in the European insurtech scene, one is wondering how things will evolve in 2022: will investment keep surging? Will the market calm down or, even worth, drop? Is there still room for innovation in that ecosystem? Will the first significant exits or, even more enthusiastic, the first IPO happen this year?

Beyond these questions which are very investment-oriented, let’s have a look at opportunities still to address in the insurance scene, and trends we expect to see growing this year - as we strongly believe we are still in the early days of the insurtech industry.

First, we believe that ‘Embedded Insurance’ will surge. That’s probably a buzzword you hear a lot in 2021, but beyond being a hashtag on social networks, it’s a growing reality (remember Qover’s €25m round in April last year or Weecover’s seed round in October 2021?) More is expected to come both in terms of KPI shared by front runners, new players will obviously enter that space across Europe and adjacent players will increasingly build insurance teams (remember Ornikar’s insurance initiative which drove its latest round in France last year? read more).

Last but not least, we are expecting insurtech startups to launch towards addressing ‘new risks’. That’s not new but the same use cases and startups are always mentioned: basically weather-related damages with Descartes Underwriting or cyber insurance with Envelop Risk.

Though there are plenty of opportunities first to get more players in these spaces: cyber insurance is gaining momentum in the US with huge rounds announced, which should raise appetite from European entrepreneurs) ; parametric insurance has long been a discussed topic and should see new players tackling that space (remember Ibisa’s seed round announced in the last days of 2021?).

But beyond these two already well-covered area, many other ‘new risks’ are still to be considered: IT-based downtimes (with e.g. Parametrix based in Israel but increasingly operating in Europe, or Riskwolf based in Switzerland) ; new ways of working - beyond just the gig economy - to offer dedicated products to freelancers (remember Jove’s seed round announced in November 2021?) ; data privacy growing concern ; AI or IoT -related risks ; and many more we could expect as the world is changing. That’s where insurtech could get a competitive edge compared to incumbents, by accessing new datasets they could make sense of thanks to algorithms or new ways of processing things (like parametric).

And you, what do you think will happen next in the European insurtech scene? Let us know your thoughts on Twitter.

The numbers are in: 2021 was a banner year for Insurtech in Europe
Comments
Follow the developments in the technology world. What would you like us to deliver to you?
All