Offering a self-driving money service, Amsterdam-based Flow has raised €3.5 million in a seed funding round as it sets its sights on a pan-European expansion.
Dan Taylor 21 April 2022
Share
Facebook Twitter Linkedin

Amsterdam-based Flow has raised €3.5 million in a seed investment round. The fintech startup helps keep users’ in the flow by providing a fully autonomous money management service. The new capital is expected to help the firm press further forward with scaling activities. To date, Flow has raised a total of €4.8 million.

Founded in 2019 and launched in 2020, the premise behind Flow is rather simple, and yet, I myself will hold my hand in the air when the, “did you remember to funnel this money there and that money there this month?” question is posed.

Because truthfully, there have been a few times when I’ve simply overlooked one step or another, and find myself wondering why this chunk of cash is sitting here when it most probably shouldn’t be. 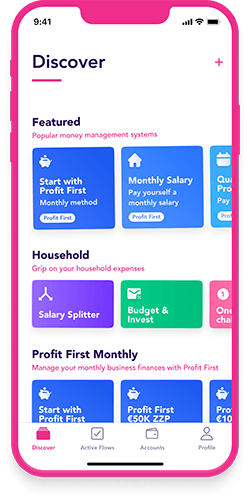 Through a series of user-defined triggers, Flow will automatically route income money flows, for example to budgets, savings accounts, and investments. Going one step further, if users really want to dive into all the features under the bonnet, according to Flow, it's possible to set up a workflow that will see the system automatically budget and prioritise income(s). In doing so, any grey areas about liquidity are void.

Recognising the unique financial situation that freelancers and self-employed professionals often find themselves in, Flow also offers a specifically tailored version of the service, one that accounts for irregular income flows, saving for taxes, insurances, and pensions.

Flow is one of the first open banking companies to receive both an AIS and PIS PSD2 license from the Dutch Central Bank, thereby facilitating connections to all European banks, and currently works in concert with bunq, Knab, ING, Rabobank, and ABN AMRO. The firm reports that talks with numerous other European banks are already well underway.

"Besides capital to scale up our platform and to develop artificial intelligence for that purpose, this investment round brings a wealth of relevant knowledge,” commented Flow founder and co-CEO Daan van Klinken. “This will help us realise our ambitions to become the leading self-driving money player, not only in the Netherlands but ultimately across Europe."

“All the more people are choosing freelancing as a long-term career path. However, this market segment lacks suitable finance products and services, which often leaves gig-workers and freelancers out of the financial mainstream,” commented Eleven Ventures’ Vassil Terziev. “Flow is on its way to revolutionize the orchestration of both personal and business finance management, leveraging cutting edge technology and AI.”

Flow keeps the flow flowing, raises €3.5 million
Comments
Follow the developments in the technology world. What would you like us to deliver to you?
All

NEXT
Game, set, match - growing with TCV
Founded in 1995, Menlo Park-based TCV specialises in providing growth-stage capital. The firm has raised over $19 billion and invested over $16…
Dan Taylor